WASHINGTON (CNS) — El Salvador has set a Jan. 22 date for the beatifications of Jesuit Father Rutilio Grande, Franciscan Father Cosme Spessotto and two laymen, the Salvadoran bishops’ conference announced Aug. 27. All four were martyred during the country’s civil conflict in the 1970s and 1980s, when countless Catholics, following Church teachings from the Second Vatican Council and the Latin American bishops’ conference, began speaking out in favor of the poor and those on the margins. The two laymen, Manuel Solórzano, an elderly sacristan, and Nelson Rutilio Lemus, a boy in his early teens, were traveling by car with Father Grande when he was shot multiple times on his way to a novena March 12, 1977. The bishops’ statement said Salvadoran Cardinal Gregorio Rosa Chávez will preside over the ceremony in the atrium of the Cathedral of San Salvador. The atrium also was the setting where Father Grande and the two laymen were carried in and out of during their funeral Mass, celebrated by St. Oscar Romero when he was archbishop of San Salvador. He, too, was martyred three years later, while celebrating Mass March 24, 1980. Father Spessotto, a Franciscan missionary from Italy, served in the Diocese of Zacatecoluca and spoke out against injustice just as the archbishop did. Father Spessotto died in a similar fashion just a few months after St. Romero: shot at point-blank range June 14, 1980.

NAIROBI, Kenya (CNS) — The Catholic Church in Ethiopia has suspended emergency delivery of aid in Tigray, following the escalation of fighting and tensions in the region in the country’s north. The Church, which has been coordinating support from international Caritas organizations as well as other local and international partners, has raised nearly $1.8 million to respond to the needs of people affected by conflicts in the country. More than 75% of the funds had been used to respond to instabilities in Tigray. “At present, the current tensions in the northern area of the country force the Church to suspend the emergency response intervention,” Father Gabriel Woldehanna, deputy general secretary of the Ethiopian bishops’ conference, said in a briefing to a delegation sent by the bishops of the Association of Member Episcopal Conferences in Eastern Africa. The Catholic agencies have been some of the biggest movers of aid in the region, where fighting started in November. Ethiopian Prime Minister Aby Ahmed Ali launched an attack on the Tigray People’s Liberation Front — former rulers of the semi-autonomous region — accusing them of seizing the national army base in Mekele, the regional capital. Fighting spread to the neighboring states.

CLEVELAND (CNS) — A national eviction moratorium that protected millions of Americans who have fallen behind on rent payments is unconstitutional, the U.S. Supreme Court ruled. In a 6-3 opinion announced late Aug. 26, the court’s conservative majority agreed with a coalition of landlords and real estate groups who challenged the extension of a moratorium put in place by the Centers for Disease Control and Prevention. The decision raised concerns among advocates of affordable housing. They called for state and local governments to speed up the distribution of $46.5 billion in federal emergency rental assistance funds made available in response to the coronavirus pandemic. “The sad piece of this is that only 11% of the money allocated by the government for eviction mitigation has been accessed. I don’t know where it’s getting hung up,” Dominican Sister Donna Markham, president and CEO of Catholic Charities USA, told Catholic News Service Aug. 27. In a news release Aug. 25, the U.S. Treasury Department said about $5.1 billion — which is 11% of the allocated funds — had been distributed to 1 million vulnerable households by July 31. The National Association of Realtors welcomed the ruling. “This decision is the correct one, from both a legal standpoint and a matter of fairness. It brings to an end an unlawful policy that places financial hardship solely on the shoulders of mom-and-pop housing providers, who provide nearly half of all rental housing in America, and it restores property rights in America,” the association said.

Enrollment on the rise in Catholic schools in Diocese of Nashville

NASHVILLE, Tenn. (CNS) — Across the Diocese of Nashville, students from preschool through high school are loading up their backpacks, putting on new uniforms and heading into a new school year. And this year, the total number of students making that trek to a diocesan school is on the rise. “We are currently expecting 4,868 students in our diocesan Catholic schools in the next couple weeks as students return to the classroom,” said Rebecca Hammel, superintendent of schools. “This is an increase of 320 students, a growth of 7.04% over last year’s opening day enrollment.” A big chunk of the growth is coming from Pope John Paul II Preparatory School, which is adding grades six through eight this year. Pope Prep will have 198 middle school students, 64% of whom are new to the Catholic school system, Hammel said. But other schools in the diocese are seeing rising numbers of students, she said. “Our elementary schools are experiencing the majority of growth, with increases as high as 34% over opening day last year,” Hammel told the Tennessee Register, Nashville’s diocesan newspaper. “Six of our 14 PK-8 grade schools are increasing at 5% or better.”

After historic floods, amount of parish, community support is ‘phenomenal’

WAVERLY, Tenn. (CNS) — Henry Kersten was pacing back and forth inside his family’s home in Waverly Aug. 21 when he saw the backyard shed being carried off by the flood waters. His wife, Leslie, was trapped inside. “It was amazingly fast,” Kersten said. “She was trying to save some things (in the shed). We never knew the extent that was going to come because we were going by the last flood that we had two years ago.” “As I was pacing, I saw the shed get washed away and watched her go by,” he continued. “It took about five hours, but by God’s blessing, a former neighbor … was able to find her.” Leslie Kersten, who with her family was a parishioner at St. Patrick Church in McEwen, Tennessee, was one of at least 19 confirmed deaths from the flooding that washed through Humphreys County Aug. 21, after up to 18 inches of rain fell in the area in less than 24 hours, breaking the Tennessee record for one-day rainfall. “God sends his toughest challenges for his strongest soldiers,” Kersten told Nashville Bishop J. Mark Spalding, who visited victims of the Waverly flood at relief shelters and their destroyed homes Aug. 24.

WASHINGTON (CNS) — An already tense situation in Afghanistan took a turn for the worse early Aug. 26 when two explosions near the Kabul airport led to casualties and injuries still being calculated. Gen. Kenneth F. McKenzie, head of U.S. Central Command, said in an Aug. 26 video news conference that 12 U.S. service members were killed and 15 were wounded in the attack. “While we’re saddened by the loss of life, both U.S. and Afghan, we’re continuing to execute the mission,” said McKenzie, adding that an extremist Islamic State group was behind the attack involving suicide bombers. Afghans, U.S. citizens and others eager to leave the country had been flocking to Kabul’s international airport after a Taliban takeover in the capital in mid-August when the Afghan military collapsed following withdrawal of U.S. troops and contractors. On the other side of the world, the Catholic Church, particularly in the U.S., has been “involved in the reception and establishment” of those seeking safe haven, participating in the effort with other faith-based aid groups and organizations such as the International Rescue Committee, said Bill Canny, executive director of Migration and Refugee Services for the U.S. Conference of Catholic Bishops.

While some of those fleeing are U.S. citizens, many are refugees who don’t have family members in the country nor have been in the U.S. before and left their lives behind at a moment’s notice with little beyond what they could carry.

DHAKA, Bangladesh (CNS) — As the COVID-19 situation worsens in Bangladesh, the country’s tiny Catholic community has been playing a vital role in battling the outbreak, despite limited resources. Church-run St. John Vianney Hospital, which started operating in November 2019, has served thousands of coronavirus patients since the virus hit the country in March 2020. Some 700 patients have been hospitalized there. Father Kamal Corraya, hospital director, told ucanews.com that the hospital’s 20 beds have been reserved for COVID-19 patients. “We have a central oxygen facility for 20 patients but have yet to arrange an ICU for the patients, as it is expensive. We realize the ICU is very urgent for us,” Father Corraya told ucanews.com. As the COVID-19 situation keep worsening, with many patients failing to get treatment, the hospital decided to treat as many as possible with minimum costs, the priest said. “When we get any critical patients, we refer them to other hospitals where they can get an ICU facility. In maximum cases, we succeed in arranging ICU beds through our connections in various hospitals. Our biggest obstacle is that our health workers are being affected, so we have to hire new staff and spend a lot of money to treat them,” the priest added. 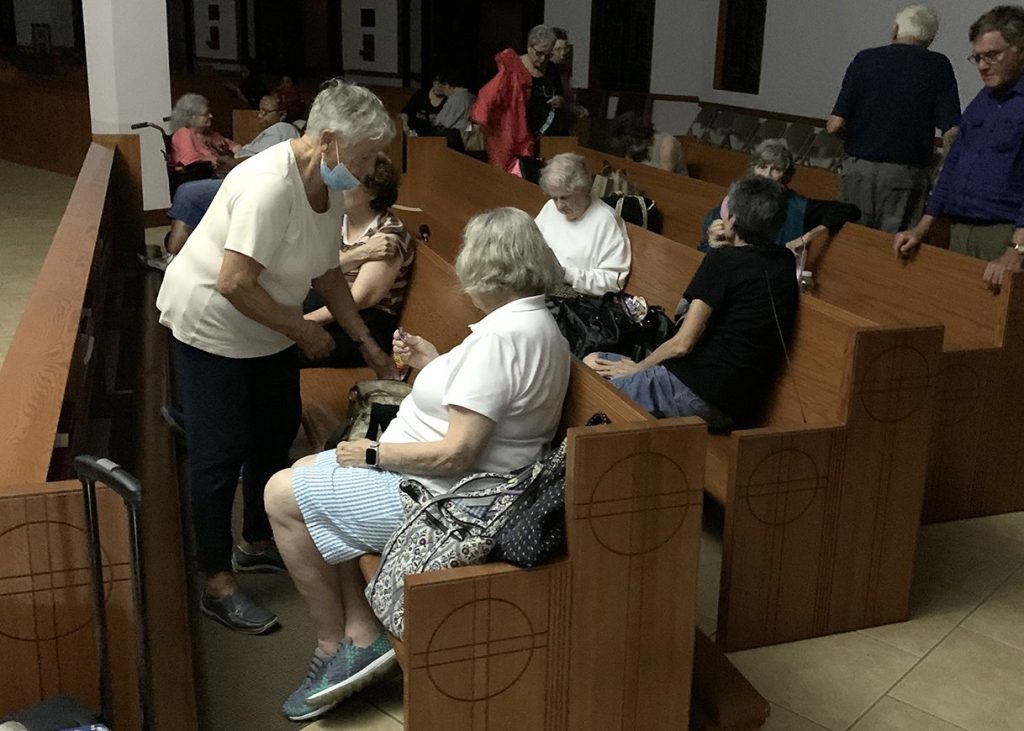