OXFORD, England (CNS) — Thousands of documents relating to England’s 19th-century convert-cardinal, Blessed John Henry Newman, are being released ahead of his Oct. 13 canonization, highlighting his role as a pastor and evangelist, said Church experts. Although 32 annotated volumes of the cardinal’s letters and diaries have been published over the past five decades, the new material includes letters and correspondence to the future saint. “Up to now, we’ve had only half his correspondence, with just fragments of letters he received, so this will greatly improve … understanding of the complex issues he dealt with,” said Paul Shrimpton, an Oxford-based expert on Newman’s educational theories. Father Ignatius Harrison, provost of Birmingham’s Oratory of St. Philip Neri, said Cardinal Newman “wasn’t just a lofty philosopher — he was primarily a priest and prophet, who foresaw the difficulties facing Christianity in a secular world. He was loved in his lifetime not because everyone had read his academic masterpieces, but because of his pastoral kindness to the poor and sick, as these collections graphically illustrate,” Father Harrison said. The first of 250,000 folios of letters and photographs preserved at the oratory were published for the first time, under a digitization program co-organized by the National Institute for Newman Studies in Pittsburgh.

NAIROBI, Kenya (CNS) — Eritrean bishops protested the government’s seizure of Catholic schools and asked that the Church be enabled to continue its educational and health services. “If this is not hatred against the faith and against religion, what else can it be?” Archbishop Menghesteab Tesfamariam of Asmara, Bishop Thomas Osman of Barentu, Bishop Kidane Yebio of Keren and Bishop Fikremariam Hagos Tsalim of Segheneity said in a letter to Eritrea’s minister of public education. “Our voice of protest” is raised again at the government’s “arbitrary and unilateral measures,” the bishops said, noting that the closure of its schools follows the seizure of its clinics and other medical facilities in June. “Considering that the actions that are being taken against our educational and health institutions are contrary to the rights and to the legitimate freedom of the Church and heavily limit the exercise of the postulates of faith, mission and social services, we ask that the recent resolutions are reviewed and the consequent course of action promptly stopped,” the bishops said. The Most Holy Redeemer Secondary School of Asmara’s seminary was closed two years ago, with three other secondary schools closed in September; one of the secondary schools includes a primary school. The bishops said in June that all health facilities run by the Catholic Church in Eritrea — more than 20, with many on the property of monasteries — had been seized by the government.

FORT WORTH, Texas (CNS) — She’s raising seven children while managing a household, marriage and high-energy career in banking. It’s no wonder Kristin Reilly considers prayer — more specifically the rosary — her life raft. Every morning at 6:45 a.m. Central Standard Time, the busy mom cuddles a baby or toddler on her lap as she leads more than 400 people in a live recitation of the rosary online at www.instagram.com/manyhailmarysatatime and her Facebook page One Hail Mary at a Time. Her Instagram account has over 30,000 followers and many log onto the daily-recorded video — available on both sites for 24 hours — to pray with her during a more convenient time. The prayer warriors span the globe and live in places like Zambia, Ireland, Australia, South America and the Philippines. “It’s just growing and growing,” said Reilly, who started the live presentation last October from her home in Illinois and invites Catholic authors and leaders to join her as guest hosts. “My goal is to get a hundred million people around the world to pray the rosary,” she said in a phone interview with North Texas Catholic, magazine of the Diocese of Fort Worth. The Facebook page — One Hail Mary at a Time — explains the rosary, offers thoughtful Marian reflections and encourages family prayer. The 37-year-old also uses the forum to share aspects of her hectic life managing a brood of youngsters age 10 and under. Her youngest is just 4 months old.

VATICAN CITY (CNS) — A delegation of U.S. bishops and laypeople came to Rome to share with Pope Francis and Vatican officials the joyful experiences and valuable recommendations that came out of last year’s Fifth National Encuentro. Archbishop Jose H. Gomez of Los Angeles, vice president of the U.S. Conference of Catholic Bishops, told Catholic News Service that he was looking forward to announcing “the good news” about what they’ve learned and how the process has been unfolding. “When we talked to the Holy Father” as they were still preparing for the September 2018 event, the archbishop said forming and inspiring missionary disciples across the nation “was our dream, and now we can share with him that it is happening.” Archbishop Gomez along with Bishop Nelson J. Perez of Cleveland, chairman of the USCCB committee on cultural diversity in the Church, and Auxiliary Bishop Arturo Cepeda of Detroit, chairman of the subcommittee on Hispanic affairs, led a delegation to the Vatican Sept. 13-18. They were presenting the “Proceedings and Conclusions of the Fifth National Encuentro of Hispanic/Latino Ministry,” and they spoke with CNS Sept. 16. The materials they have been sharing offer a summary of the challenges, opportunities, recommendations and successful practices when it comes to pastoral care and accompaniment of Hispanic and Latino communities in the United States and their call to be missionary disciples.

WASHINGTON (CNS) — Cokie Roberts, a broadcast journalist and political commentator who spoke publicly about her Catholic faith and her admiration for the Sacred Heart sisters who taught her, died Sept. 17 due to complications from breast cancer. She was 75. Roberts, who died at her home in Bethesda, Maryland, was an Emmy award-winning reporter, author and frequent keynote speaker at Catholic college graduations. She was described as “a true pioneer for women in journalism,” by James Goldston, president of ABC News, her longtime employer. He said her “kindness, generosity, sharp intellect and thoughtful take on the big issues of the day made ABC a better place and all of us better journalists.” She was inducted into the Broadcasting and Cable Hall of Fame and was listed one of the 50 greatest women in the history of broadcasting by the American Women in Radio and Television. She also was named a “Living Legend” by the Library of Congress in 2008. Roberts started her radio career at CBS and in 1978 began working for NPR covering Capitol Hill, where she continued to work as a political commentator until her death. Roberts joined ABC News in 1988 and during her three decades there, she was a political commentator, chief congressional analyst and co-anchor with Sam Donaldson of the news program “This Week” from 1996 to 2002. She was born in New Orleans in 1943 with the full name Mary Martha Corinne Morrison Claiborne Boggs and was nicknamed “Cokie” by her brother. Roberts attended Catholic schools in New Orleans and Bethesda, run by the sisters of the Society of the Sacred Heart. During her career, she also wrote eight books, including a book with her husband, Steve Roberts, also a journalist, called “From This Day Forward’’ about their interfaith marriage. Steve is Jewish.

PHOENIX (CNS) — Arizona’s Catholic bishops praised the state Supreme Court’s Sept. 16 decision upholding the refusal by two Christian artists to create custom wedding invitations for same-sex couples based on their religious belief in marriage as being between one man and one woman. “We are grateful that the importance of religious liberty was recognized today by the Arizona Supreme Court in the case of Brush & Nib Studio v. City of Phoenix,” the bishops said in a statement. Joanna Duka and Breanna Koski, who started their studio in 2015, “only want to create art that is consistent with their artistic and religious beliefs,” the bishops said. “Today’s ruling striking down a Phoenix law that had threatened their ability to do so by potential government coercion is, therefore, a positive development for religious liberty,” they said. “After all, the freedom to practice one’s religion is fundamental to our way of living and should never be reduced to a ‘freedom of worship’ that limits these rights to the confines of church property.” The statement, released in Phoenix by the Arizona Catholic Conference, was signed by Bishop Edward J. Weisenburger of Tucson, Bishop Thomas J. Olmsted and Auxiliary Bishop Eduardo A. Nevares of Phoenix and Bishop James S. Wall of Gallup, New Mexico, whose diocese includes a portion of Arizona.

MEMPHIS, Tenn. (CNS) — On the night of a full moon Sept. 13, a high Mass in Latin was celebrated in remembrance of prominent Memphis historical figure Mother Mary Agnes Magevney (1841-91) at St. Peter Church, sponsored by the Magevney Society. She was the first child of Eugene and Mary Magevney, who arrived in Memphis when its population was only about 1,000. It is believed that the first Mass in Memphis was celebrated in their home. St. Peter Church is in downtown Memphis, next door to the original Magevney family home, one of the oldest homes standing in Memphis. It has long been called “The Cradle of Catholicism” in Memphis. Mary Agnes was baptized in the parlor of the home. It is the first Catholic baptism recorded in West Tennessee. She was educated at St. Agnes Academy in Memphis and later became a sister. In 1882, she traveled by train to Galveston, Texas, which was in dire need of teachers, to start the Dominican Congregation of the Sacred Heart. The Mass celebrated was the extraordinary form, known as the Tridentine rite, and many of the women in attendance wore veils. Father Yoelvis Gonzalez, the celebrant, faced the altar. 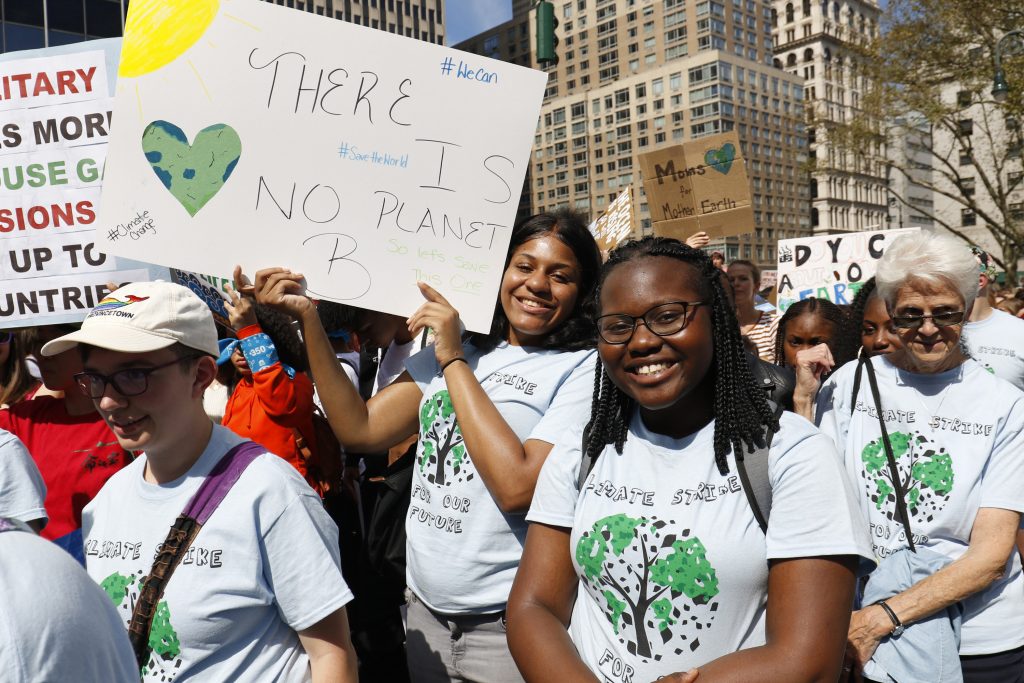 Students from St. Joseph High School in Brooklyn, N.Y., smile as they participate in the Global Climate Strike in New York City Sept. 20, 2019. The youth-led march and rally was one of many demonstrations held around the world urging government and business leaders to take immediate action to combat climate change. (CNS photo/Gregory A. Shemitz)