MANCHESTER, England (CNS) – Catholics in the U.K. paid tribute to Queen Elizabeth II following her death on Sept. 8 and the end of a reign that lasted more than 70 years. Pope Francis sent a telegram addressed “To His Majesty the King, Charles III,” her son who immediately ascended to the throne. “I willingly join all who mourn her loss in praying for the late queen’s eternal rest  and in paying tribute to her life of unstinting service to the good of the nation and the Commonwealth, her example of devotion to duty, her steadfast witness of faith in Jesus Christ, and her firm hope in His promises,” Pope Francis said. The British sovereign died “peacefully” at Balmoral, the royal residence in Scotland, surrounded by members of her family. She was 96. Cardinal Vincent Nichols of Westminster, President of the Bishops’ Conference of England and Wales, paid tribute using many of the queen’s own words. “On 21 April 1947, on her 21st birthday, Princess Elizabeth said, ‘I declare before you all that my whole life, whether it be long or short, shall be devoted to your service,’” Cardinal Nichols said. “Now, 75 years later, we are heartbroken in our loss at her death and so full of admiration for the unfailing way in which she fulfilled that declaration.” “Even in my sorrow, shared with so many around the world, I am filled with an immense sense of gratitude for the gift to the world that has been the life of Queen Elizabeth II. At this time, we pray for the repose of the soul of Her Majesty. We do so with confidence, because the Christian faith marked every day of her life and activity.”

Before Her Murder by Insurgents, Italian Nun Called Niece for Prayers

VATICAN CITY (CNS) – Perhaps just hours or less before her murder in northern Mozambique as militants swept into the area, Comboni Sister Maria De Coppi left a voice message with her niece, urging her to pray for the people on the run. “Hello, Gabriella, good evening. I just wanted to tell you the situation here is agonizing, it’s not good. It is very tense,” was the voice message Comboni Sister Gabriella Bottani received from her aunt at 8 p.m. on Sept. 6. The audio was posted online on Sept. 7 by the Italian bishops’ television news program, TG2000. “Everyone here is fleeing, the people are running away. It is a very, very sad situation,” Sister Maria said, after describing some recent attacks that occurred not far from her location at a mission in the village of Chipene in the province of Nampula. “Pray for us, that the Lord protects us and also these people. Goodbye, good night,” she said, ending her message. According to the Vatican newspaper on Sept. 8, Sister Gabriella, who is International Coordinator of the Talitha Kum anti-trafficking network based in Rome, called her aunt back as soon as she heard the message. “I asked her, ‘Auntie, you’re not leaving?’ and, after a moment of silence, she answered ‘I don’t know, I want to wait,” Sister Gabriella said, according to the Vatican newspaper article. According to Fides, the information service of the Pontifical Mission Societies, Italian Sister Maria, 84, was killed by a bullet to the head during the night between Sept. 6 and 7 during an attack on their mission.

PRINCE ALBERT, Saskatchewan (CNS) – The Catholic bishops of Saskatchewan offered prayers for everyone affected by the deadly stabbing rampage that left 12 dead – including the two suspected killers – and at least 18 injured. And Catholics in the Prince Albert Diocese joined the local Anglican bishop at a special service for the victims and survivors of the Sept. 4 stabbing spree on the James Smith First Nation and in nearby Weldon, Saskatchewan. The five bishops of Saskatchewan said they mourn “those whose lives have been lost, those who have been injured, and those whose peace and security has been shattered by these horrific events,” and invited “all to join in prayer, turning to God for comfort and healing.” The bishops also prayed for everyone across Saskatchewan who has been providing assistance, including “first responders, health care workers, and everyone offering help and support to those affected by this tragedy.” Late on Sept. 7, media reported Myles Sanderson, 32, died after police forced the stolen car he was driving off a highway in Saskatchewan. One official told journalists he died of self-inflicted injuries. The Associated Press reported members of Saskatchewan’s Serious Incident Response Team went to the arrest site and would review Sanderson’s death and police conduct. Sanderson and his brother, Damien, were alleged to have carried out the early morning spree on Sept. 4 in the James Smith First Nation, where they lived, and the surrounding areas. Damien Sanderson was found dead on Sept. 5 near one of the scenes of the attacks.

TALLAHASSEE, Fla. (CNS) – Generations of people have come to know St. Teresa of Kolkata, better known as Mother Teresa, as a humanitarian, a role model, an example of holiness in action, and an intercessor with God. Jim Towey is one of the fortunate few who also got to know her as a friend. Towey, an attorney by trade who has also worked in government and academia over the years, first met Mother Teresa 37 years ago after he started volunteering at a soup kitchen run by the Missionaries of Charity, the order of religious sisters she founded in 1950 to work among the poor in the eastern Indian city of Kolkata, formerly known as Calcutta. The order has since opened hundreds of missions, medical clinics, and hospices around the world, including 41 active facilities in the U.S. Struggling with what he considered the shallowness of his life in Washington at the time, Towey traveled to India in 1985 seeking an encounter with the future saint. That meeting, which started their decades of friendship and changed the course of Towey’s life, led him to dedicate much of his time to serving the poor and vulnerable. Towey then spent 12 years not only as a close friend but also a trusted adviser for Mother Teresa. He shares the story of his friendship with the saint in his new book: “To Love and Be Loved – A Personal Portrait of Mother Teresa.” The book, published by Simon & Schuster, was released on Sept. 6, just one day after the 25th anniversary of Mother Teresa’s death in 1997. Talking about Mother Teresa recently with Catholic News Service, Towey said: “I miss her company, her laugh, and her motherly love. It was heaven to be around her.”

NAIROBI, Kenya (CNS) – Places of worship have become the latest target for the forced roundup of Eritrean teens to serve as soldiers, in what clerics describe as a deteriorating situation. For two years, 15- and 16-year-olds have been taken from towns and villages. Some are ending up on the front lines in the war in Ethiopia’s northern state of Tigray, according to the sources. “A few weeks ago (Eritrea) resumed the confiscation of schools run and owned by the Catholic Church. (As if) this was not enough, now there are roundups of young boys and girls aged 16 … for compulsory military service without end,” Father Mussie Zerai, a Catholic priest of Eritrean origin who works with migrants, told Catholic News Service on Sept. 7. “They do it in places of worship as happened last Sunday (Sept. 4) in the Eparchy of Segheneity, in the village in Akrur at the Catholic parish of Medhanie Alem,” he said. The priest said the soldiers arrived during Mass and surrounded the church to prevent anyone from escaping. They proceeded to take the teens by force, including all the boys of the choir in their uniforms, said the priest, pointing at photographs widely circulated on social media. “These young people end up in military training camps and then (would) be sent as slaughter fodder in the wars underway in the region, particularly in neighboring Ethiopia,” said Father Zerai.

SHORELINE, Wash. (CNS) – In the spirit of Pope Francis’ call to care for creation, Holyrood Cemetery is using goat power, not gas power, to clear four acres of undeveloped, blackberry-infested land. “This is a first for the archdiocesan cemeteries,” said Rich Peterson, Director of Associated Catholic Cemeteries in the Seattle Archdiocese. In the past, gas-powered machinery would have been used to maintain the wild areas at the 88-acre cemetery, “but in the spirit of being good environmental stewards, we have arranged with a goat herder to hire his goats,” Peterson said. The idea originated with Kristi Fawbush, Holyrood’s office manager, and Dan Britton, the cemetery’s grounds foreman, said Ashley Lobie, who was named Holyrood’s superintendent in July. With some environmentally sensitive practices already being used at Holyrood, the trio mulled over “what’s an environmentally friendly way get rid of blackberry bushes? As a collaborative, we came up with goats,” Lobie said. 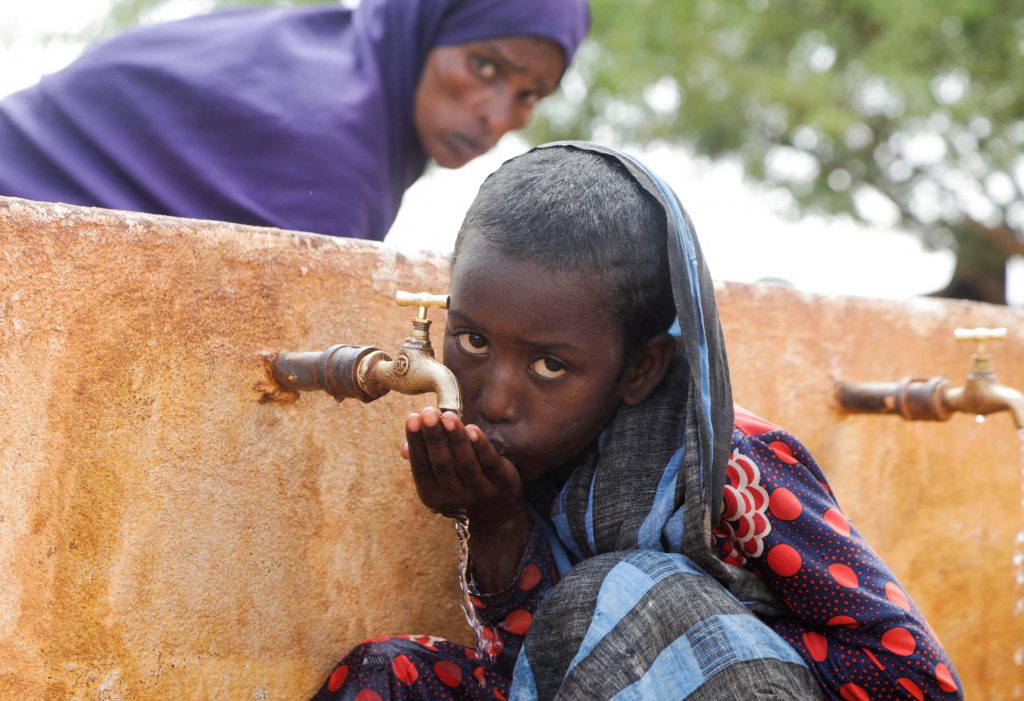 A displaced Somali drinks water from a tap at a camp in Dollow May 24, 2022. Catholic Relief Services is among international agencies warning of famine looming in Somalia. (CNS photo/Feisal Omar, Reuters)