Kidnapping in Haiti prompts worries about other church workers’ safety

WASHINGTON (CNS) — As Christian missionaries and family members, some as young as 8 months old, were still being held for ransom in Haiti by a gang notorious for group kidnappings, other charities and religious groups examined how they can remain safe while delivering humanitarian aid. Seventeen members of Christian Aid Ministries, based in Millersburg, Ohio, were kidnapped Oct. 16. The 400 Mawozo, which is considered in control of Croix-des-Bouquets and the surrounding area where the abductions occurred, claimed credit for the kidnapping and is demanding a $17 million ransom — $1 million per person. The Ohio group was grabbed after their visit to an orphanage in Croix-des-Bouquets, a northeast suburb of Haiti’s capital, Port-au-Prince. In April, five priests and two nuns were abducted in that same area and released after 20 days when ransoms were paid. Christian Aid Ministries is connected to Amish and Mennonite groups in the United States. “This is the worst Haiti has been for a long time,” Miami Archbishop Thomas G. Wenski told The Tablet, the newspaper of the Diocese of Brooklyn, New York. “It’s hard to see when it turns around. You think once it hits bottom it would start going on the uptick, but every time we think we hit bottom we find out that bottom is even deeper.”

VATICAN CITY (CNS) — At the heart of the celebration of World Mission Sunday are the experiences of countless missionaries who share with others their own personal love story with Jesus, said Filipino Cardinal Luis Antonio Tagle. Promoting the celebration of World Mission Sunday Oct. 24, Cardinal Tagle, prefect of the Congregation for the Evangelization of Peoples, told journalists that the Church’s mission to evangelize does not belong to just a select few, but is a “call for all the baptized. Spirituality and an encounter with the Lord is always missionary,” he said. A relationship with Jesus is “an experience that moves us out of ourselves to share Jesus with all nations.” A missionary, he said, is anyone who “tells ‘a story of love’ lived with Jesus and brings compassion from Christ to the world. We cannot keep to ourselves the encounter with God who has touched our hearts and who has done marvelous works,” he said.

HOUSTON (CNS) — Catholic Church officials say they are not surprised by the 2020 U.S. census showing Hispanics accounted for 51.1% of the country’s growth, rising to 18.7%, or about 62.1 million, of the U.S. population. Eight in 10 Hispanics in the U.S. are American citizens, according to the data. And for the first time, the percentage of whites dipped below 60% in the U.S. to 57.8% in 2020, the census stated. For future planning in education and job training, the census reported the under-18 population is now majority people of color at 52.7%. In Southwestern states, the numbers are even closer, with Hispanics now the largest population group in California, while in Texas, Hispanics grew to 39.3% of the state’s population, nearly equal to non-Hispanic whites at 39.7%. All these census numbers align with a national program the Catholic Church has developed in V Encuentro, or Fifth National Encuentro, a series of regional and national meetings of Hispanic ministry leaders and youths, said Lazaro Contreras, director of the Galveston-Houston Archdiocese’s Office of Hispanic Ministry. Now the office is in the midst of finalizing a bilingual manual to help Hispanic laypeople and Church leaders to “provide a pastoral response to the large presence of Hispanics in the church in the U.S.,” Contreras told the Texas Catholic Herald, the archdiocesan newspaper.

Retired Pope Benedict hints at his death in condolence message

WILHERING, Austria (CNS) — Retired Pope Benedict XVI has hinted at his death in a condolence message for a former colleague who was a professor in Regensburg, Germany. “Now he has arrived in the hereafter, where I am sure many friends are already waiting for him. I hope that I will soon be able to join them,” the 94-year-old pope wrote in a letter published by the Upper Austrian Cistercian Abbey of Wilhering on the death of Father Gerhard Winkler. The German Catholic news agency KNA reported that in the letter dated Oct. 2, the retired pope also emphasized that Father Winkler, who died at the end of September at the age of 91, was “closest to him” among all his colleagues and friends. “His cheerfulness and deep faith always attracted me,” he wrote. Father Winkler was a Cistercian monk and professor of Church history at the University of Salzburg from 1983 to 1999. Before that, he had been a professor at the University of Regensburg beginning in 1974, at the same time as Joseph Ratzinger, later Pope Benedict XVI, who was there from 1969 to 1977.

BISMARCK, N.D. (CNS) — A Gold Mass celebrating the “unity between science and religion” will bring scientists and science students together in prayer and fellowship Nov. 3 at the University of Mary. Bismarck Bishop David D. Kagan will preside at the 10 a.m. liturgy at Our Lady of the Annunciation Chapel on campus. “We are excited to host this Gold Mass. It is a wonderful way of connecting those who practice or teach science, at the university or in the community, and witnessing to the harmony of faith and reason,” Jack Boyle, assistant professor of biology, said in a news release from the school. The Mass has been celebrated at the school since 2018. It is one of several around the country arranged in collaboration with the Society of Catholic Scientists. Founded in 2016, the society is an international organization of scientists and undergraduate, graduate and postdoctoral students who are pursuing research in natural science. Gold was chosen for such liturgies because it is the color worn on the hood of those receiving a doctoral degree in science. In addition, St. Albert the Great, the patron saint of scientists, was an alchemist who worked to turn base metals into gold.

WASHINGTON (CNS) — Washington Cardinal Wilton D. Gregory said marking the 10th anniversary of the dedication of the Martin Luther King, Jr. Memorial in Washington Oct. 21 was an opportunity “to pause and reflect together at this place of tribute to the legacy of a great American. In studying and reflecting on this special place on its 10th anniversary, we are inspired by the life work of Dr. King and confidently recognize ourselves and the work we must still do in gratitude for each of the lessons he shared with us,” he said in remarks at an anniversary ceremony. Cardinal Gregory, who offered a reflection and prayer, said Rev. King’s examples of hope and resiliency should inspire people today to “never grow discouraged in our pursuit of social justice and racial justice.” The cardinal joined President Joe Biden, Vice President Kamala Harris, representatives of different faith communities, civil rights activists and others at the memorial to remember the slain civil rights leader and honor his legacy. Attendees included House Speaker Nancy Pelosi, D-Calif., District of Columbia Mayor Muriel Bowser, members of the Congressional Black Caucus and other civic leaders. “As Dr. King did in his lifetime — and as we are called to live our own beliefs — we are actively called to work against racism, police brutality, poverty and the need for food, immigration reform, housing, health care and mental health disparity and violence in all of its forms,” Cardinal Gregory said. 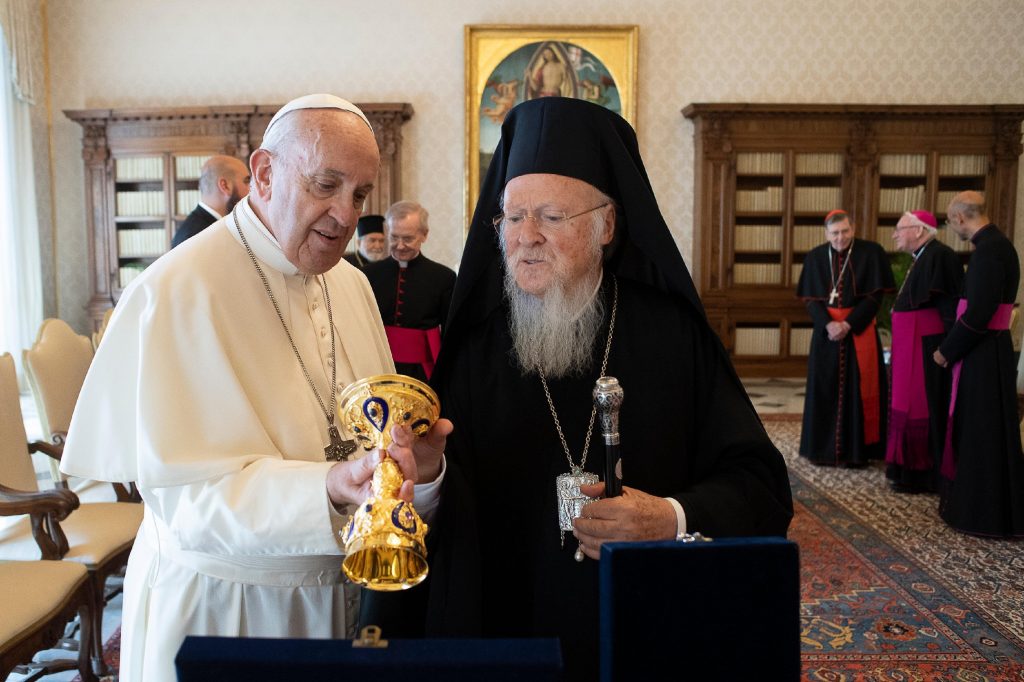 Pope Francis and Ecumenical Patriarch Bartholomew of Constantinople exchanges gifts at the end of a private meeting at the Vatican in this Sept. 17, 2019, file photo. The pope sent good wishes to Patriarch Bartholomew on the 30th anniversary of his election and expressed his gratitude to God for the “profound personal bond” they share. (CNS photo/Vatican Media)