WASHINGTON (CNS) — A billboard will go up in New York’s Times Square during Christmas and New Year’s to promote and celebrate the evermore popular podcast “The Bible in a Year,” but more is in store for the program that topped the charts shortly after its debut in January. The creators of the daily podcast that leads listeners through the Bible’s narrative have announced several new initiatives designed to highlight the show’s success and attract even more listeners. An all-new Spanish-language version of the podcast — La Biblia en un año — with original commentary and a new, native-Spanish speaking host, will be launched Jan. 1. “The Bible in a Year Retreat” virtual event for listeners will take place Feb 18-20. It will have a limited capacity for participants but is “designed to help Catholics cultivate a lifelong relationship with the word of God — one that extends far beyond the podcast.” The planned billboard will be unveiled Dec. 19 in Times Square and will stay up through Jan. 9. “Through distraction and distress, our culture has lost a hopeful, historical biblical worldview — but by the grace of God this podcast has helped thousands rediscover it,” said Father Mike Schmitz, a priest of the Diocese of Duluth, Minnesota, and popular Catholic speaker and author, who hosts the podcast.

WASHINGTON (CNS) — For Ogechi Akalegbere, a catechist and co-chair of the pastoral council at St. Rose of Lima Church in Gaithersburg, Maryland, everyone has a story that is worth telling — and hearing. And Akalegbere strives to ensure that people’s stories are heard — from the young adult seeking a voice in her parish to the people she encounters as a volunteer community organizer and board member of the Catholic Campaign for Human Development-funded interfaith organization Action in Montgomery, just outside Washington. Those stories, she believes, can change hearts. Her reasoning: It is far better for people to speak for themselves than to have others speak for them. And it’s in those stories where the Holy Spirit speaks for justice, Akalegbere told Catholic News Service. “I learned about the importance of relationships and the importance of shared stories and who gets to speak in my work,” she said. “When you don’t have the opportunity to share stories and get noticed, the narrative can be controlled by someone else.” Akalegbere’s efforts to ensure that personal experiences, struggles and viewpoints are heard has earned her the annual Cardinal Bernardin New Leadership Award from CCHD, the U.S. bishops’ domestic anti-poverty and social justice program. She received the award at a reception Nov. 16 during the U.S. Conference of Catholic Bishops’ fall general assembly in Baltimore. Announced Nov. 11, the award recognizes a young adult between ages 18 and 40 “who demonstrates leadership in fighting poverty and injustice in the United States through community-based solutions.”

WASHINGTON (CNS) — Archbishop Timothy P. Broglio of the U.S. Archdiocese for the Military Services Nov. 9 blessed the first of 100,000 copies of the new sixth edition of the “Armed with the Faith” Catholic prayer book for members of the military. Knights of Columbus volunteers, including some currently serving in the military, delivered the copies to the archdiocese’s Edwin Cardinal O’Brien Pastoral Center in Washington. The prayer books will be sent to active-duty U.S. military serving around the world. Developed by the Knights in partnership with the military archdiocese, the books are designed to hold up in arduous conditions, with features including waterproof and tear-resistant stock, and plastic binders that enable the turning of pages without a sound. “Throughout my military career, my fellow soldiers and I were strengthened and comforted by a daily commitment to prayer, as we asked for God’s intercession to protect our nation and help us preserve our freedoms,” Supreme Knight Patrick Kelly wrote in an introduction to the new edition. “It’s my hope that today’s active-duty military personnel will find the ‘Armed with the Faith’ Catholic prayer book their indispensable resource for reflection and prayer,” he added.

WARSAW, Poland (CNS) — Poland’s military archbishop urged security forces to prevent the illegal entry of refugees and migrants, as the country’s bishops’ conference announced a nationwide collection to help those amassing on the frontier with Belarus. “Our republic’s eastern border is under attack — we all look with hope and gratitude to you, soldiers of the Polish Army, who are fulfilling their military oath and risking health and life to guard our sovereignty,” said Archbishop Józef Guzdek, who heads the Polish church’s military diocese. “Thank you for your dedication and awareness of the difficult situation of migrants exploited by the Belarusian regime, and for the families supporting you in this dangerous, dedicated service for Poland, Europe and the world.” The archbishop issued the appeal Nov. 10 as Polish Defense Minister Mariusz Blaszczak told national radio stranded migrants, mostly from Asia and the Middle East, had been trying to break through border fences in freezing overnight conditions. Meanwhile, Archbishop Stanislaw Gadecki, president of the Polish bishops’ conference, confirmed his church had attempted to help through refugee centers and local border parishes. However, he added that “much more” was needed in face of a “humanitarian catastrophe” and set a special collection for Nov. 21 to support the “long-term integration of refugees deciding to stay in Poland. The Church’s primary mission lies in proclaiming the Gospel — so when it’s necessary to provide help for newcomers, we must not avoid this,” Archbishop Gadecki said Nov. 8.

VATICAN CITY (CNS) — Honoring two reporters who have covered the Vatican for more than 40 years, Pope Francis paid tribute to all journalists who work to explain what is going on in the world and “make it less obscure.” Addressing the honorees, Philip Pullella of Reuters and Valentina Alazraki of Televisa, and their colleagues Nov. 13, Pope Francis said, “I also thank you for what you tell us about what is wrong in the Church, for helping us not to hide it under the carpet and for the voice you have given to the victims of abuse. Thank you for this.” During an audience in the Consistory Room of the Apostolic Palace, the pope conferred on the two the grand cross of the Order of Pope Pius IX, the highest papal honor bestowed on laypeople who are not heads of state. In their more than 40 years covering the Vatican, Pullella and Alazraki each have made well over 100 papal trips abroad. With their families present, but also dozens of other members and former members of the Vatican press corps and of the Vatican press office staff, Pope Francis said, “We are travel companions. Today I want in some way to pay homage to your entire working community,” he said, and “to tell you that the pope loves you, follows you, esteems you, considers you precious.”

VATICAN CITY (CNS) — Honoring an Australian theologian, a French philosopher and two German theologians, Pope Francis prayed that they may continually be inspired by retired Pope Benedict XVI’s episcopal motto, “Cooperatores veritatis” — co-workers in the truth. During a midday meeting in the Clementine Hall of the Apostolic Palace Nov. 13, Pope Francis awarded the Ratzinger Prize to Tracey Rowland, an Australian theologian; French philosopher Jean-Luc Marion; and German theologians Hanna-Barbara Gerl-Falkovitz and Ludger Schwienhorst-Schönberger. After the ceremony, the four awardees visited Pope Benedict at his home in the Mater Ecclesia monastery in the Vatican Gardens. Rowland and Marion won the prize in 2020, but the ceremony was not held because of the COVID-19 pandemic. The Ratzinger Prize recognizes theologians, specialists in sacred Scripture or artists, scientists or philosophers who have enriched theological studies by their work. The pope chooses the winners from a short list of candidates recommended by a five-person committee of the Joseph Ratzinger-Benedict XVI Foundation, which was established in 2010 to support theological research and to promote studies on the theology and teaching of the retired pope. Jesuit Father Federico Lombardi, president of the foundation, said the award is not a recognition of a particular book or project, but considers “the long and in-depth work” of the winners.

VATICAN CITY (CNS) — Visiting Cyprus and Greece in early December, Pope Francis will have several meetings with the countries’ Orthodox leaders and with the migrants and refugees their nations host. While Catholics account for only a small percentage of the Christians in both countries, the pope will hold meetings in both Nicosia and Athens with priests, religious and seminarians and will celebrate public Masses in both cities. The Vatican Nov. 13 released the detailed schedule of the pope’s visit Dec. 2-4 to Cyprus and Dec. 4-6 to Greece, including a return visit to migrants and refugees on the island of Lesbos awaiting resettlement. 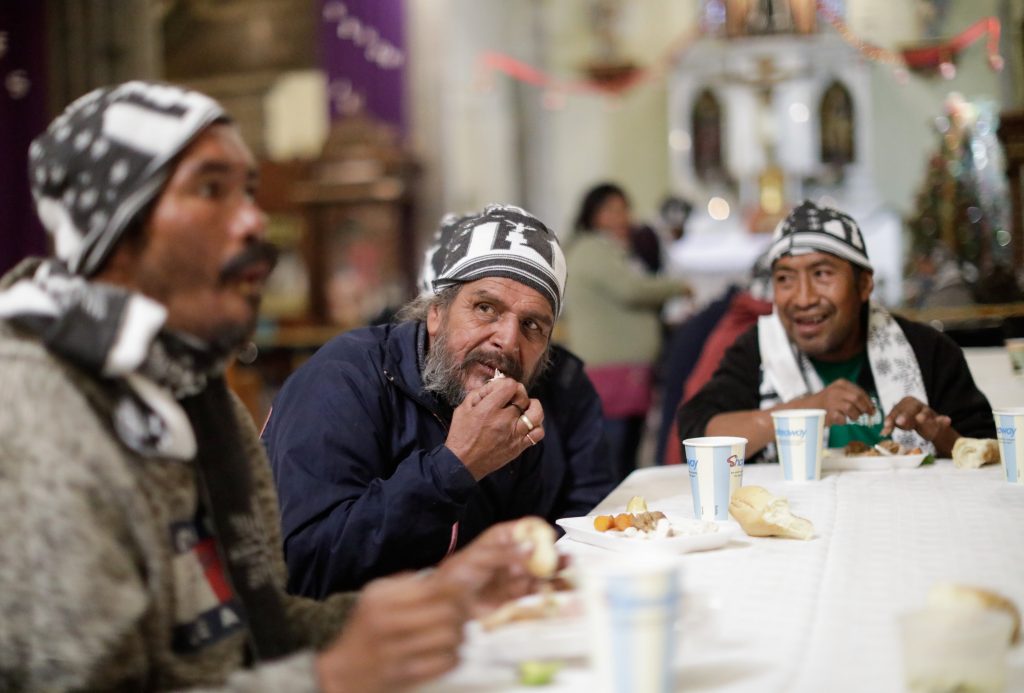 People in need enjoy a free New Year’s Eve dinner at Our Lady of the Solitude Church in Mexico City during the COVID-19 pandemic. During the pandemic, parishes in the Diocese of Chalco, on the outskirts of Mexico City, have made care packages, taken meals to families of COVID-19 patients and operated food banks. (CNS photo/Gustavo Graf, Reuters)