NEW YORK (CNS) — A U.S. District Court judge’s Nov. 6 ruling that halts a Trump administration conscience protection rule for health care professionals leaves them “vulnerable to being forced to perform, facilitate or refer for procedures that violate their conscience,” said the senior counsel for the First Liberty Institute. These protections “would ensure that health care professionals are free to work consistent with their religious beliefs while providing the best care to their patients,” said Stephanie Taub. The Texas-based institute focuses on religious freedom cases. In his 147-page opinion, Judge Paul A. Engelmayer, of the U.S. District Court for the Southern District of New York, ordered HHS to vacate the rule, “Protecting Statutory Conscience Rights in Health Care,” in its entirety. He said it exceeded the statutory authority of HHS, was “arbitrary and capricious” and was adopted “in breach” of the procedural requirements of the Administrative Procedure Act. But Engelmayer also acknowledged that “conscience provisions recognize and protect undeniably important rights.” His ruling, he said, “leaves HHS at liberty to consider and promulgate rules governing these provisions. In the future, however, the agency must do so within the confines of the Administrative Procedure Act and the Constitution.”

WASHINGTON (CNS) — Eight centuries ago, St. Francis of Assisi took a risk when he crossed the battlefield between Crusader and Muslim forces near Damietta, Egypt, desiring to meet Sultan al-Malik al-Kamil and preach his faith in Jesus Christ. At the time — 1219 — Christian forces were in the midst of the Fifth Crusade, which was eventually repelled by the sultan’s superior army near the town that was a center of trade and commerce on the Nile River where it flows into the Mediterranean Sea. The future saint readily put his life on the line so he could witness his faith to the famed Muslim sultan, and in doing so both men came away with a new respect for the faith of the other, Franciscan Father Michael Calabria told a conference on that encounter with “the other” Nov. 7 at The Catholic University of America in Washington. Early retellings of the meeting describe al-Kamil as willingly listening to St. Francis as he preached and being a gracious host, said Father Calabria, director of the Center for Arab and Islamic Studies at St. Bonaventure University in New York. The future saint witnessed peacefully and his subsequent writings reveal the meeting had a profound impact on his life, the priest told participants in the event titled “The Sultan and the Saint: The Spiritual Journey of Transformative Encounter.”

COLUMBUS, Ohio (CNS) — The Ohio Senate Nov. 6 passed a bill that would require a child born alive following an abortion receives the same medical care accorded any newborn at the same gestational age. A second measure OK’d the same day would mandate that abortion facilities inform women that chemical abortions can possibly be reversed to save their unborn child’s life. The Born-Alive Infant Protection Act, or S.B. 208, passed with a 24-9 vote, and the Abortion Pill Reversal Act, or S.B. 155, passed with a 23-10 vote. Called “life-affirming” by the Catholic Conference of Ohio, the public policy arm of the state’s Catholic bishops, the two bills will now be taken up by the Ohio House of Representatives. The conference commended the bills’ sponsors, Republican Sens. Terry Johnson and Peggy Lehner, respectively. Lehner also was a co-sponsor of the Born-Alive bill. “This legislation acknowledges, promotes and preserves the dignity of human life,” Johnson said in a statement. “Every new born infant deserves our compassion and care, no matter where we stand in the broader abortion debate.”

WASHINGTON (CNS) — Anyone arriving early for the Nov. 2 opening of the 27th International Week of Prayer and Fasting at the Basilica of the National Shrine of the Immaculate Conception found an usher tugging at their sleeve. “Could you please sit in one of the first five rows?” she asked. “We’re broadcasting.” She needn’t have worried. The sanctuary filled up quickly for the all-day event in Washington, which was livestreamed for the first time. This year’s theme combined pro-life topics with mercy, forgiveness and healing. Speakers included Abby Johnson, the former Planned Parenthood clinic director who now runs And Then There Were None; Kristan Hawkins, who heads Students for Life; and Father Chris Alar, a priest with the Marians of the Immaculate Conception, who wrote a book about dealing with the aftermath of suicide. The event combined rosaries of the sorrowful, joyful and glorious mysteries led by various national groups from parishes throughout the Washington area, and a Mass celebrated by Msgr. Charles Pope, pastor of Holy Comforter- St. Cyprian Catholic Church in Washington. Another speaker, Father Ubald Rugirangoga of Rwanda, was singled out for praise by Maureen Flynn, organizer of the event with her husband, Ted: “A lot of signs and wonders are following this priest.” Father Rugirangoga, a healing priest, is a genocide survivor.

BALTIMORE (CNS) — Not many may notice that the Diocese of Fairbanks, Alaska, is being removed from the list of missionary dioceses around the world dependent on the Congregation for the Evangelization of Peoples. But Fairbanks Bishop Chad W. Zielinski hopes the move will catch the attention of other U.S. bishops and spur them to heed Pope Francis’ call for more missionary disciples to serve places such as his diocese. On Nov. 11, the Vatican announced this change for the Fairbanks diocese, and it will now be under the direction of the Congregation of Bishops. Some hope the move for Fairbanks will lead to greater collaboration with the U.S. Conference of Catholic Bishops, which is from now on responsible for diocese’s missionary, pastoral and economic concerns. One of the greatest of those concerns, said Bishop Zielinski, is the shortage of priests. He told Catholic News Service the hope is that others will “embrace the reality that we’re still a mission diocese and we have missionary needs. We only have 18 priests serving 46 parishes.”

LOS ANGELES (CNS) — The “failures” of the nation’s leaders in Washington to make “comprehensive reforms to immigration policy “cut across party lines, said Archbishop Jose H. Gomez of Los Angeles. These failures date back to 1986, he said, which was the last time Congress passed immigration reform. Ahead of the oral arguments on the Deferred Action for Childhood Arrivals taking place Nov. 12 at the U.S. Supreme Court, Archbishop Gomez said there are “no doubt” constitutional and legal questions “raised by DACA and how it was enacted.” “But we need to be clear: The fate of these young adults should never have been in the courts in the first place,” the archbishop wrote in a column Nov. 6 column in the Angelus, online news outlet of the Los Angeles archdiocese. “And it would not be, if our leaders in Washington would simply set aside their political interests and come together to fix our nation’s broken immigration system.” DACA was established by President Barack Obama’s executive order in 2012, and President Donald Trump ordered an end to the program in 2017. Several legal challenges to this order have resulted in a consolidation of three DACA cases now before the high court. 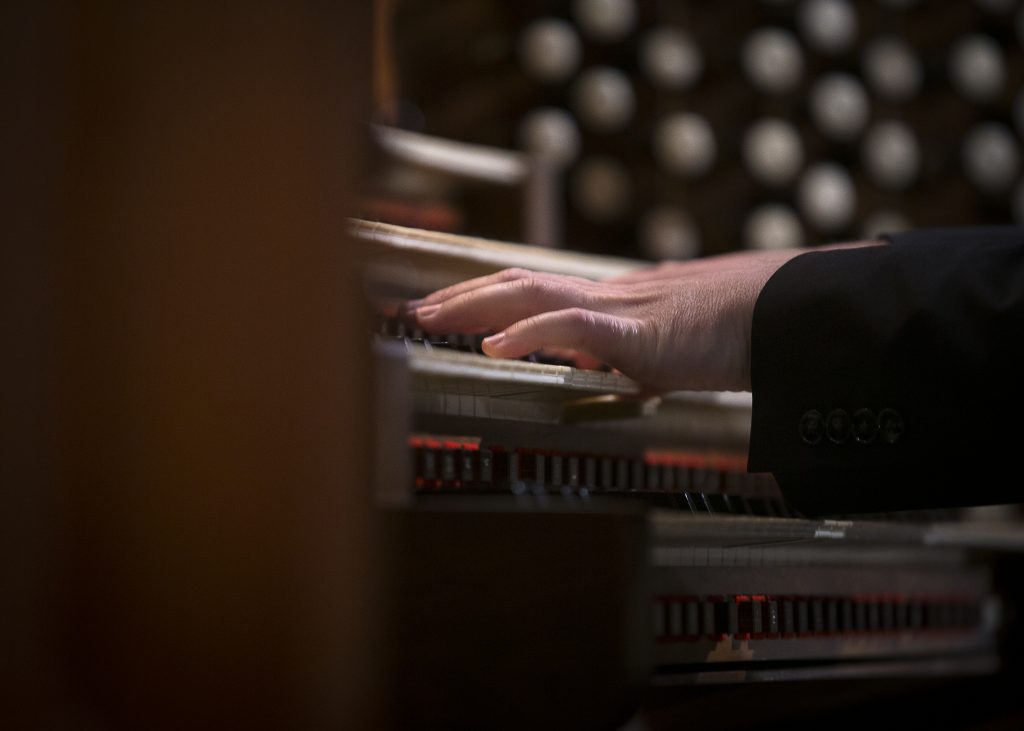 Organist Johann Vexo of Paris rehearses April 25, 2019, the Basilica of the National Shrine of the Immaculate Conception in Washington. Liturgical musicians have the unique calling to interpret God’s will and love through song and praise, Pope Francis said Nov. 9 during a meeting with participants at a Vatican conference on interpreting sacred music. (CNS photo/Tyler Orsburn)