VATICAN CITY (CNS) — The mystery and wonder of God’s creation can open the hearts of men and women to express their gratitude through prayer, Pope Francis said. During a live broadcast of his weekly general audience from the library of the Apostolic Palace May 20, the pope said that human beings are “the only creature aware of such a profusion of beauty” and cannot help but “wonder what design of love must be behind such a powerful work. The prayer of man and woman is closely linked to the feeling of wonder,” he said. “Human greatness is miniscule when compared to the dimensions of the universe. The greatest human achievements seem to be few and far between” when compared to God’s creations. The pope’s reflection coincided with the observance of “Laudato Si’ Week” May 16-24. The weeklong event was promoted as an occasion for Catholics to look at steps they have taken to protect the environment and assist the world’s poor people. Before concluding his talk, the pope said that in contemplating God’s creation, Christians can be inspired to give thanks to God through prayer. “We are children of the great King, the Creator, capable of reading His signature in all of creation, that creation which we don’t care for today. But in that creation, there is the signature of God who made it out of love,” he said.

Pandemic may lead to changes in the way schools operate, say educators

NASHVILLE, Tenn. (CNS) — It’s been a strange year for Catholic schools. “In all my years of teaching, I’ve never experienced anything like this,” said Marsha Wharton, principal of St. Edward School in Nashville. “But you try to make the best of it.” Schools in the Diocese of Nashville were forced to send their students home in mid-March and finish the year with distance learning, due to precautions to prevent the spread of COVID-19. “The hardest thing about all this is every week it’s changed,” said Michael Deely, headmaster of Pope John Paul II High School in Hendersonville, Tennessee. “It’s the constant anxiety of the unknown.” Schools have had to adjust not only how they deliver an education to students confined to their homes, but also a host of traditional end-of-the-year events, including graduation. “We’re monitoring state guidelines” for when and how large groups will be permitted to gather, said Rebecca Hammel, superintendent of schools for the Diocese of Nashville. “Everyone hoped to have face-to-face graduations, but in Davidson County that’s not possible to do that for a while,” she said. “We’re looking at different options and opportunities,” she said, including rescheduling graduation ceremonies to June or July. “We really hope conditions allow us to do something face-to-face.”

WASHINGTON (CNS) — The head of National Right to Life and other pro-life leaders criticized Planned Parenthood affiliates for applying for and receiving funds under the Paycheck Protection Program, created by Congress to provide relief for small businesses with fewer than 500 employees. The Coronavirus Aid, Relief and Economic Security Act, or CARES Act, designed PPP “to protect small businesses not behemoth organizations with over 16,000 employees,” Carol Tobias, president of National Right to Life, said in a May 20 statement. A Fox News report May 19 said that 37 Planned Parenthood affiliates applied for and received $80 million, which Tobias said the organization “should return.” PPP, which is administered by the Small Business Administration, is a nearly $700 billion business loan program to help certain businesses, self-employed workers, sole proprietors, certain nonprofit organizations, and tribal businesses continue paying their workers. Critics of the monies going to Planned Parenthood affiliates include Russell Moore, president of the Ethics and Religious Liberty Commission, the public policy arm of the Southern Baptist Convention. “We must remain focused on defeating this virus and saving lives,” Moore told the Baptist Press. “Planned Parenthood’s actions show it is not interested in the former because it has never cared about the latter.”

TORONTO (CNS) — The quiet victims during the worldwide coronavirus pandemic have been those grieving the death of a loved one. A different aspect of grieving has been introduced to a lot of people due to public health restrictions keeping people from properly sharing their grief when a loved one dies, as social distancing measures mean large-scale celebrations like funerals are forbidden, and the accompanying visitations and other processes surrounding death are just not possible. For many, there is no closure. These are integral parts of the grieving process and largely hidden as the world focuses on getting through the current crisis. “The ritualized grief experience … for the most part has been taken away,” said Deacon Curtis Boone. As a grief counselor, Deacon Boone sees this on a daily basis. He sees the heartbreak, where even visiting the gravesite of a loved one is forbidden as cemeteries are locked. He shares the pain he has encountered when dealing with the bereaved.

WASHINGTON (CNS) — The president of SIGNIS urged the world’s bishops as the “chief storyteller” in their diocese to use all media at their disposal to “make known” stories “of faith and hope” and of local Catholic heroes who exemplify Christ’s love to give people courage in “difficult times,” like this current pandemic. Catholic media outlets also can provide “basic tools” to the faithful “to spot” false stories, such the narratives about the “Chinese” virus causing the pandemic and rumors of “dangerous fake cures,” said Helen Osman, who heads SIGNIS, the World Catholic Association for Communication, based in Brussels. She made the comments in a statement issued ahead of World Communications Day, which is May 24. A former diocesan editor and former communications secretary for the U.S. Conference of Catholic Bishops, Osman is currently a communications consultant for the Texas Conference of Catholic Bishops in Austin. Pope Francis’ message for this year’s World Communications Day is: “That you may tell your children and grandchildren” (Ex 10:2): Life becomes history.” The pope “reminds us of the importance of the stories we tell, especially in the midst of the din of media that leave us feeling dislocated,” Osman said. “The narratives that we live by must reflect the vision of the interconnectedness of all human life.” 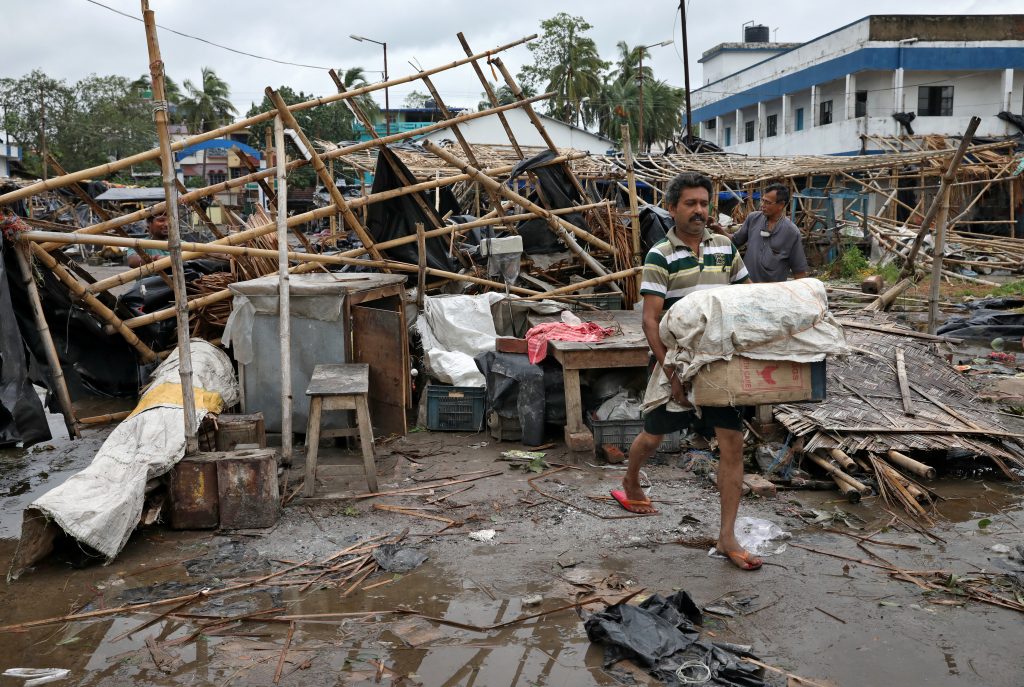 A man salvages his belongings from the rubble of a damaged shop in the Indian state of West Bengal May 21, 2020, a day after Cyclone Amphan made its landfall there and in Bangladesh. (CNS photo/Rupak De Chowdhuri, Reuters)