WASHINGTON, D.C. (CNS) – San Francisco’s archbishop declared on May 20 that House Speaker Nancy Pelosi, D-Calif., is not “to be admitted” to Communion unless and until she publicly repudiates “support for abortion ‘rights’” and goes to confession and receives absolution “for her cooperation in this evil.” Archbishop Salvatore J. Cordileone said he decided to make this declaration “after numerous attempts to speak with her to help her understand the grave evil she is perpetrating, the scandal she is causing and the danger to her own soul she is risking” as a Catholic who supports legalized abortion. Pelosi represents California’s 12th Congressional District, which is entirely within San Francisco. A call to Pelosi’s Washington, D.C. office from Catholic News Service to request a comment was not returned immediately. “Please know that I find no pleasure whatsoever in fulfilling my pastoral duty here,” Archbishop Cordileone said. “Speaker Pelosi remains our sister in Christ. Her advocacy for the care of the poor and vulnerable elicits my admiration. I assure you that my action here is purely pastoral, not political. I have been very clear in my words and actions about this.” The archbishop opened his 1,300-word letter by saying that Pope Francis “has been one of the world’s most vocal advocates of human dignity in every stage and condition of life.”

WASHINGTON, D.C. (CNS) – The U.S. Court of Appeals for the 7th Circuit heard oral arguments on May 16 in a case to determine if the government can overturn an Indiana Catholic school’s decision not to renew the contract of one of its faculty members. The case, Starkey v. Roman Catholic Archdiocese of Indianapolis, involves Lynn Starkey, a former guidance counselor at Roncalli High School in Indianapolis, who sued the school and the archdiocese in 2019 after her contract was not renewed due to her same-sex marriage. School officials said her marriage was a violation of her contract and Church teaching. Starkey’s current case is an appeal of last year’s decision by a federal District Court to throw out her lawsuit. In dismissing the case, the District Court judge said the school employee’s case did not stand up to the principle of ministerial exception that protects a religious school’s hiring and firing practices from government intrusion. Becket, a religious liberty law firm representing the Indianapolis Archdiocese, has argued that both federal law and the First Amendment protect religious schools’ right to make hiring decisions based on religious doctrine. “The Supreme Court has long recognized that the Constitution protects the freedom of religious schools to choose their leaders without government interference,” said Luke Goodrich, Vice President and Senior Counsel at Becket in a statement. “If the First Amendment means anything, it means the government can’t punish the Catholic Church for asking Catholic school educators to support Catholic teaching.”

BUFFALO, N.Y. (CNS) – Bishop Michael W. Fisher of Buffalo joined mourners outside a Tops grocery store where 10 people were killed and three others were injured in what law enforcement authorities said was a racially motivated crime. Placing flowers and a handwritten note remembering “the souls of our brothers and sisters lost to the acts of violence and racism” at a growing memorial outside the store, Bishop Fisher paid his respects to the victims on May 17, the Western New York Catholic reported. Cheryl Calire, Director of Pastoral Ministries for the Buffalo Diocese, told the Buffalo diocesan news outlet that the bishop’s visit offered a “prayerful, peaceful way of being present” with others who had gathered at the site. Bishop Fisher talked with police and fire department officials who were coordinating the investigation at the crime scene as investigators combed the store and surrounding area for evidence that could be linked to the suspect in the mass killing, 18-year-old Payton S. Gendron of Conklin, New York. All of those who died were Black, as was one of the three who were injured.

Ukrainians ‘have made the Bible come alive’ for world, says archbishop

SOUTH BEND (CNS) – Ukrainians “have made the Bible come alive for the world,” Archbishop Borys Gudziak, head of the Ukrainian Catholic Archeparchy of Philadelphia, told graduates of the University of Notre Dame on May 15. “David withstands Goliath, the Way of the Cross has stations in Bucha and Borodianka, Mariupol and Sumy. Jesus suffers with his people,” said the prelate as the speaker for Notre Dame’s 177th commencement ceremony. “We had a Lent and Holy Week like no other. We pray that the Cross will again lead to the Resurrection, to the victory of life over death.” Archbishop Gudziak, who also is the head of external relations for the worldwide Ukrainian Catholic Church, said the Indiana Catholic university “has offered a singular response to the Russian invasion and devastation of Ukraine. My presence reflects your heartfelt solidarity. It is a sign of your capacity to love generously, to embrace, to serve and save the suffering, to bless the cursed and lift up the downtrodden and trampled,” he said. The archbishop also was presented with an honorary degree, and when he received it and was introduced to the crowd, the more than 3,300 Notre Dame graduates rose and waved Ukrainian flags in a show of solidarity with a nation under siege. “Make some noise! I’m incredibly moved by your hospitality and your singular solidarity,” he told the graduates. “I want to tell you, millions of Ukrainians will see you waving these flags today. They will be heartened by your prayer, your love and your commitment to truth. My hat is off to you, dear graduates.”

SEOUL, South Korea (CNS) – One of South Korea’s most senior clergymen says he believes the Catholic Church in communist North Korea is growing, although Catholics live in hiding and endure persecution. Archbishop Victorinus Youn Kong-hi, 97, former head of the Archdiocese of Gwangju, South Korea, made the remarks in a recently published book on the history of the North Korean Church, reported ucanews.com. “The Story of the North Korean Church” is a Korean-language, comprehensive book on the history of the Catholic Church in the northern part of the Korean Peninsula based on eight interviews with the archbishop last year.

Writer Kwon Eun-jung penned the book sponsored by the Catholic Oral History Records for Peace on the Korean Peninsula project of the Catholic Institute for Peace in Northeast Asia, a body under the Catholic Diocese of Uijeongbu, Korean news portal chosun.com reported on May 13. In the book, the elderly churchman, who was born in an area now covered by North Korea, gave vivid testimonies of how the Church thrived in the territory before the Korean Peninsula was divided between the democratic South and communist North and the eruption of the Korean War. The missionaries distributed medicines to poor people who needed medical attention, established schools and carried out other charitable works to support local Catholics, who were poor but very enthusiastic, he said.

Holiness is possible and church provides tools to attain it, cardinal says

BALTIMORE, MD (CNS) – Holiness is possible, and the Catholic Church provides the tools for attaining it. That was the theme of an address delivered on May 15 by Guinean Cardinal Robert Sarah at the Basilica of the National Shrine of the Assumption of the Blessed Virgin Mary in Baltimore. The evening talk, which was preceded by a morning Mass celebrated by Cardinal Sarah, was part of the closing celebration of the 200th anniversary of the dedication of the basilica, the first Catholic cathedral built in the United States. The neoclassical cathedral, designed by U.S. Capitol Architect Benjamin Latrobe and envisioned by Baltimore Archbishop John Carroll as a beacon of religious liberty, was dedicated in 1821 by Baltimore Archbishop Ambrose Maréchal. “Holiness is nothing other than living exactly as God wants us to live, by being conformed more and more to His Son,” said Cardinal Sarah, former prefect of the Congregation for Divine Worship and the Discipline of the Sacraments. Prayer, fasting and penance can be invaluable aids for helping individuals in the pursuit of holiness, Cardinal Sarah said. Prayer fashions one’s true identity, he explained, and fasting helps discipline hearts and free them from distraction. Through daily meditation on Scripture, he said, “we allow God to shape our minds and we learn to recognize his voice.” 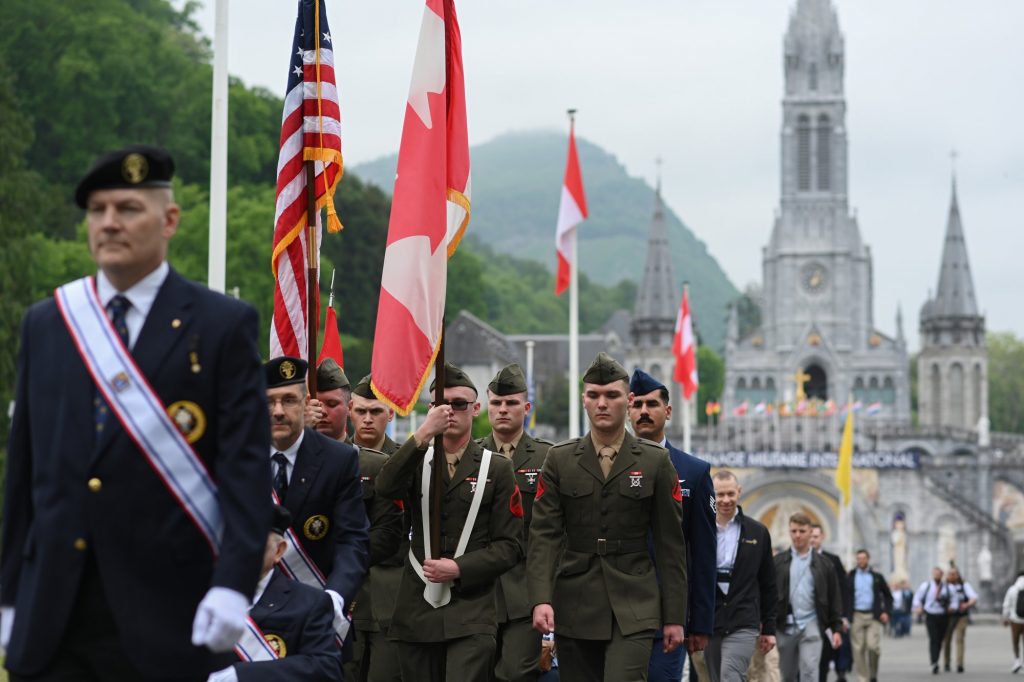 Active-duty military personnel and veterans taking part in the “Warriors to Lourdes” pilgrimage march on the Esplanade in front of the Basilica of Our Lady of the Rosary in Lourdes, France, May 12, 2022. (CNS photo/Tamino Petelinsek, Knights of Columbus)