WASHINGTON (CNS) — The justices of the U.S. Supreme Court seemed divided May 6 over Trump administration rules that give employers more ability to opt out of providing contraceptive coverage in their health plans. The argument, part of a handful that will take place by teleconference during the coronavirus restrictions, took another look at an issue that has come before the court already and again, as in previous terms, it highlighted the Little Sisters of the Poor, the order of women religious who care for the elderly poor. “There are very strong interests on both sides here, which is what makes the case difficult, obviously,” Justice Brett Kavanaugh said in the May 6 arguments, which lasted 40 minutes longer than usual-allotted hour. He said the interests include religious liberty for the Little Sisters of the Poor and others and ensuring women’s access to health care and preventive services. “So the question becomes: Who decides how to balance those interests?” he asked. The Little Sisters of the Poor, who have been down this road before, were represented by Becket, a religious liberty law firm.

CLEVELAND (CNS) — Laudatory comments about President Donald Trump by New York Cardinal Timothy M. Dolan have been blasted in a letter to the prelate from more than 1,500 faith leaders. The letter, released May 1, said the cardinal’s late April remarks in a conference call with the president and subsequent appearance on Fox News “sends a message that Catholic leaders have aligned themselves with a president who tears apart immigrant families, denies climate change, stokes racial division and supports economic policies that hurt the poor. “There is nothing ‘pro-life’ about Trump’s agenda,” said the letter released by the advocacy group Faith in Public Life. In the conference call April 25 to discuss the needs of Catholic schools, which have been struggling because of the coronavirus pandemic, Trump described Cardinal Dolan as a “great gentleman” and “a great friend of mine.” Cardinal Dolan responded that he held “mutual” feelings toward the president and that he calls Trump more often than he calls his 90-year-old mother. Two memos obtained by Crux, an online Catholic news organization, prior to this phone call indicated that the Catholic leaders were advised before their participation in the call that it could subject them to approaches from the president’s reelection campaign. But Chieko Noguchi, director of public affairs for the U.S. Conference of Catholic Bishops, told CNS in a statement that the purpose of USCCB’s participation in the April 25 call was to “advocate directly with the highest government officials on behalf of U.S. Catholic schools, which face an unprecedented crisis because of COVID-19.”

VATICAN CITY (CNS) — Economic stagnation, ongoing sanctions, food shortages and reduced funding all risk making life in a post-pandemic world more dangerous and deadly than the coronavirus itself, said the Vatican-based international network of Catholic charities. “Unfortunately, the aftershock of the pandemic” is proving to be “even more complicated and more deadly than the impact of the virus itself, especially for the most vulnerable communities in the poorest countries,” Caritas Internationalis said in a statement May 6. It urged the international community and donor countries “to take courageous and immediate action” or else millions of vulnerable people will face worsening malnutrition or starvation. The U.N. World Food Program estimates that the number of people on the brink of starvation worldwide “will double as a result of COVID-19 and could reach 230 million people,” it said. “Africa is the worst affected continent, experiencing food shortages due to the lockdown, as well as a diversity of disasters such as floods, drought, locust invasion and poor harvest. Many countries in the Middle East, Latin America and in Asia are already on the verge of a severe food crisis leading to child malnutrition and starvation” among adults, Caritas Internationalis said.

Beatifications for May, June postponed due to pandemic

VATICAN CITY (CNS) — The Vatican announced that due to the coronavirus pandemic, several beatifications scheduled for May and June will be postponed, including the beatification of a mentor and friend of St. John Paul II. In a statement released at the end of April, the Congregation for Saints’ Causes said the beatifications also would be delayed in order to respect social distancing measures in place to prevent the spread of COVID-19. “Due to the ongoing pandemic situation and the necessary prudential measures that must be taken regarding religious ceremonies involving the presence of numerous faithful, at the request of the bishops concerned, the beatifications that had been set for the coming months are postponed,” the statement said. New dates for the ceremonies have not been set. Among the beatifications that were postponed was that of Cardinal Stefan Wyszynski, who was primate of Poland from 1949 until his death from cancer in 1981. He was Poland’s youngest bishop when he was installed as archbishop of Warsaw and Gniezno during communist rule. In 1953, several months after he was made cardinal, he was placed under house arrest after he called on the Catholic Church in Poland to resist against the communist government.

VATICAN CITY (CNS) — Pope Francis advanced the sainthood causes of one woman and four men, including an Italian millennial who dedicated his brief life to spreading faith and happiness to his peers. The pope signed the decrees May 5 during a meeting with Cardinal Angelo Becciu, prefect of the Congregation for Saints’ Causes. The Vatican published the decrees May 6. The pope recognized the heroic virtue of Matteo Farina, a 19-year-old who, while seemingly living a normal life for a person his age, dedicated himself to helping others after being inspired by a dream of St. Pio of Pietrelcina at the age of 9. Despite being diagnosed with cancer at the age of 13, Farina continued to write and speak about the importance of being happy and holding on to faith. He died in 2009. Pope Francis also recognized the heroic virtues of Maria de la Concepcion Barrecheguren Garcia, a Spanish woman who died in 1927 at the age of 21 after battling tuberculosis. He also recognized the heroic virtues of her father, Redemptorist Father Francisco Barrecheguren Montagut who, after the death of his daughter and his wife, entered the order in 1944 and was ordained a priest in 1948. He died in Granada, Spain, in 1957.

Catholic priests, nuns were among those killed by Nazis

WARSAW, Poland (CNS) — The Nazis’ systematic persecution and genocide led to the deaths of 6 million Jews in Europe, but Catholic priests and nuns were also among their victims. Half of all Poland’s Catholic priests, monks and nuns suffered repression during the six years of World War II, with more than 2,800 killed at Nazi and Soviet hands. Researchers like Anna Jagodzinska of Poland’s National Remembrance Institute say clergy were particularly targeted as upholders of national culture and identity. Of the nearly 2,800 clergy of all denominations incarcerated at the Nazi concentration camp of Dachau, 1,773 were priests from Poland, of whom 868 were killed. Others were subjected to exhausting labor and pseudo-medical experiments. Despite the horrors, many priests witnessed to the faith by hearing confessions and staging secret Masses, also offering practical and spiritual support to fellow inmates. Catholic clergy of various nationalities died as martyrs at other Nazi-run camps, including the largest,Auschwitz-Birkenau, whose 1.2 million mostly Jewish victims included St. Maximilian Kolbe and St. Edith Stein, also known as St. Teresa Benedicta of the Cross. Other beatified martyrs include 11 Polish nuns from the Holy Family of Nazareth shot by the Gestapo at Navahrudak, in present-day Belarus, in August 1943 after the nuns volunteered to die in place of local villagers. Blessed Titus Brandsma, a Dutch Carmelite, was killed with a lethal injection after defending Jews and press freedom. French lay Catholic Marcel Callo was sent to the camps for involvement with the Young Christian Worker movement.

VATICAN CITY (CNS) — Pandemic restrictions have upset plans for pilgrimages and major public Masses celebrating the 100th anniversary of the birth of St. John Paul II. But it hasn’t stopped book launches and an online film premiere about the life and legacy of Karol Wojtyla, who was born May 18, 1920, in Wadowice, Poland. Spanish filmmakers were releasing a new documentary, “Wojtyla: The Investigation,” May 8 and Mario Enzler, a former Swiss Guard now living in New Hampshire, has a book out by Newman House Press titled, “I Served a Saint,” reflecting on his service at the Vatican from 1989 to 1993. While many people will be able to look back and remember key events, iconic images and inspirational teachings from St. John Paul’s life and pontificate, the Vatican publishing house has released a book aimed specifically at the countless young people, “who still know very little or even nothing” about the saint, who died 15 years ago, said Alessandro Gisotti. “We thought it would be wonderful with a very simple, very slick volume … to be a gift, especially for the younger generation,” Gisotti, the vice-editorial director of Vatican media, said in an online interview with the Catholic television station, Telepace, May 5. 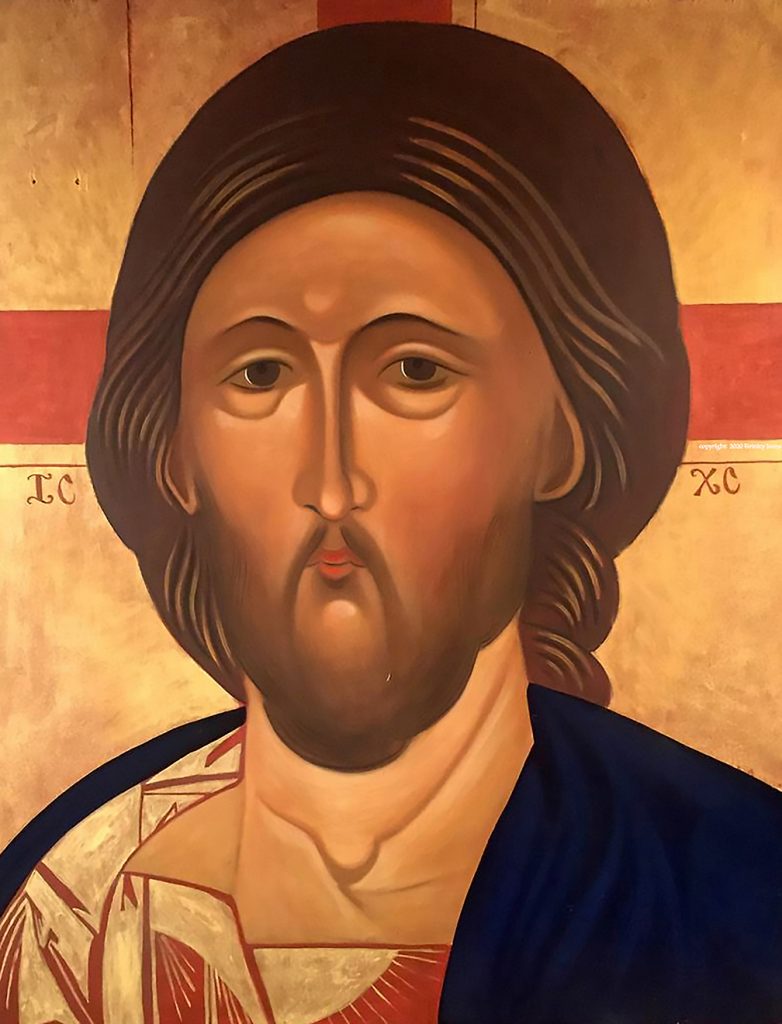 This is an icon of “Christ the Healer” by Joe Malham. (CNS photo/courtesy Joe Malham via Chicago Catholic)