WASHINGTON (CNS) — President Joe Biden announced May 3 he was raising the historically low refugee cap of 15,000 left by the Trump administration, but he also warned that his administration may not be able to meet the new number of refugees it is seeking to resettle in what remains of the fiscal year: 62,500. In a statement, the president said that while the previous cap set by Trump did not reflect the country’s values “as a nation that welcomes and supports refugees,” it may be difficult for his administration to meet the new goal. “The sad truth is that we will not achieve 62,500 admissions this year. .. It will take some time, but that work is already underway,” he said in the statement. “We have reopened the program to new refugees. And by changing the regional allocations last month, we have already increased the number of refugees ready for departure to the United States.” The announcement was aimed at sending a signal, he said, “to remove any lingering doubt in the minds of refugees around the world who have suffered so much, and who are anxiously waiting for their new lives to begin.” In November, Biden said during a virtual Jesuit Refugee Service event that he would be heading in a dramatically different direction than the previous administration on refugee admissions and said he would raise the ceiling when he took office to 125,000.

LANHAM, Md. (CNS) — When Patricia Eze jokes, “I have a full house,” she is not talking about a poker hand. On June 25, 2020, she delivered quintuplets at Holy Cross Hospital in Silver Spring, Maryland. Those five babies — Chimdi Louisa, Chimezie Lauren, Chinanu Lisa, Sopulu Basil (the only boy) and Chisom Leslie — are believed to be the first set of quintuplets born in the hospital’s 58-year history, according to Holy Cross Health. Patricia and her husband Basil Eze, both originally from Nigeria, are also the parents of a 5-year-old daughter, Chinna. Their family marked a special milestone April 25 when the quintuplets were baptized at St. Matthias the Apostle Catholic Church in Lanham, exactly 10 months from the day they were born. Father Canice Enyiaka, also from Nigeria, baptized the babies as they were held by five godmothers, most of whom wore headdresses and colorful traditional African dresses. “Today it is my pleasure to present to you the newest members of this Catholic community, the quintuplets,” said the priest, who repeated their names, as the congregation clapped and cheered.

SAN DIEGO (CNS) — At 29, Mick Hammock is the young face of San Diego’s oldest Knights of Columbus council. Hammock, who serves as grand knight of Council 1349, has brought the passion and perspective of a young adult to his leadership role. His proud association with the Knights of Columbus and its values serves as a convincing rebuttal to anyone who might be tempted to write off the Catholic fraternal organization as some sort of old-timers’ club. The number of younger men who have joined the council over the past year at his invitation testifies to the fact that they too see a place for themselves in the organization. “I know for a fact it’s helped strengthen my faith,” Hammock said of his involvement with the Knights, and he has found it “unbelievably rewarding” to help fellow Knights deepen their own faith. Council 1349, which was established in 1908 as the first in the region, represents six central San Diego parishes. Tom Davis, president of the San Diego diocese chapter of the Knights of Columbus and a two-time past grand knight of the council, recognized Hammock’s potential and asked him last year to consider becoming the next grand knight. “I liked how Mick wears his Catholicism on his sleeve, how he’s a leader in our faith first,” said Davis, 53, who has been a Knight for 27 years.

Pope thanks health care workers, urges equal access to care for all

VATICAN CITY (CNS) — Pope Francis expressed his gratitude for all those who are committed to caring for the sick and supporting those in great need. “All of us are grateful in these days to those working tirelessly to combat the pandemic, which continues to claim many lives, yet at the same time has represented a challenge to our sense of solidarity and authentic fraternity,” he said in a video message to an online conference on health care May 8. “For this reason, concern for the centrality of the human person also demands reflection on models of health care that are accessible to all the sick, without disparity,” he said. The pope’s message in Italian helped close a three-day virtual conference featuring more than 100 speakers presenting the latest advancements in medicine and innovative ways to deliver health care as well as discussing their theological, ethical and cultural impacts. Titled, “Exploring the Mind, Body and Soul — Unite to Prevent and Unite to Cure,” it was the fifth health care conference organized jointly by the Pontifical Council for Culture, its Science and Faith Foundation and the New York-based Cura Foundation and Stem for Life Foundation, which seeks to promote stem-cell therapy and research.

WASHINGTON (CNS) — Filming has begun on “Stu,” which tells the story of a Father Stuart Long, a onetime boxer who became a priest and died in 2014. Catholic actors Mark Wahlberg and Mel Gibson star in the project, Wahlberg as the priest and Gibson as his father. Variety, a show business magazine, reported Wahlberg has added a lot of weight to play the role. Gibson’s girlfriend Rosalind Ross, with whom he has a 4-year-old son, wrote the script — she’s written two other films in the past decade — and is directing her first feature film. Wahlberg is listed as one of the producers of the movie, which has no release date set. “Stu” also features Mexican actress Teresa Ruiz, best known for her work as Isabella in “Narcos: Mexico,” and veteran Australian actress Jacki Weaver, known for her role as Bradley Cooper’s mother and Robert De Niro’s wife in the 2012 film “Silver Linings Playbook.” It’s not the first time Wahlberg and Gibson have appeared together on screen. In the 2017 comedy “Daddy’s Home 2,” Wahlberg reprised his role as Dusty from the original, and Gibson played his father — the same relationship to be depicted in “Stu.” 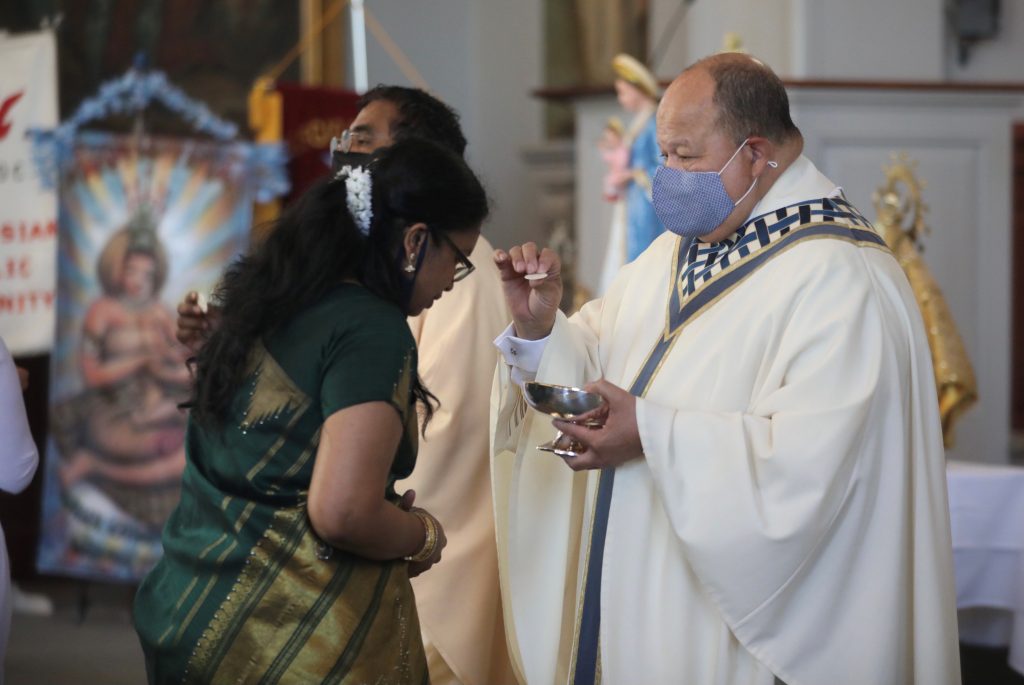