NEW YORK (CNS) – New York Cardinal Timothy M. Dolan said he was surprised and inspired by Ukrainians he met when he made a brief visit to Lviv, Ukraine. “I thought I would come to Ukraine and see great depression,” he told the Religious Information Service of Ukraine. “Yes, I see sadness and pain, but I am impressed by the vitality, hope and solidarity of Ukrainians.” On May 2, the cardinal and Archbishop Mieczyslaw Mokrzycki, Latin-rite archbishop of Lviv, met with the leadership of the Ukrainian Catholic University, families of displaced Ukrainians who found refuge during the war and student volunteers. The visit was part of a trip by a New York church delegation to visit and express solidarity with Ukrainian refugees, including those in the bordering countries of Poland and Slovakia. “I see Ukrainians welcoming internally displaced persons. I see Ukrainians giving their rooms and houses to those who have lost their homes, such as here at the Ukrainian Catholic University. I see Ukrainians volunteering and working on water, medicine and food supplies,” Cardinal Dolan told RISU. “I see people who are patriots. I see Ukrainians who do not allow evil to say the last word. Life will overcome darkness. Life will defeat death. There is no depression in Ukraine, there is hope. I feel encouraged to be here in Ukraine.” The cardinal told RISU he would pass on the Ukrainians’ messages of gratitude for all the help they received from Americans. Nearly 12 million Ukrainians have fled their own country or been displaced from their homes in Ukraine since the Russian military invasion of their homeland began on Feb. 24, according to the United Nations.

VATICAN CITY (CNS) – Pope Francis’ secretary of state reaffirmed the pope’s offer to go to Moscow personally to try to convince President Vladimir Putin to stop his war on Ukraine but said the Kremlin had yet to respond. Cardinal Pietro Parolin, Secretary of State, told reporters on May 4, “There has been an offer from the Holy Father to go to Moscow to meet personally with President Putin. We are waiting for them to tell us what they want, what they intend to do.” “I think that at this point there are no other steps to take,” the cardinal said. In an interview with the Italian newspaper, Corriere della Sera, published on May 3, Pope Francis said he had Cardinal Parolin send his offer to Putin in mid-March in an attempt to convince the Russian president to stop the war or, at least, to respect humanitarian corridors to evacuate innocent civilians. “We still have not had a response, and we are still being persistent, even though I am afraid Putin may not be able to and may not want to have this meeting right now,” the pope had said. “I am doing what I can. If Putin were to open the door. …” Although the pope said he was willing to go to Moscow, he repeated his decision not to accept an invitation from Ukrainian President Volodymyr Zelenskyy to visit Kyiv “for now” because he did not think doing so would help stop the war. Many people, especially Ukrainians, are disappointed that the pope will not go to Kyiv and has not condemned Putin or Russia by name.

ABUJA, Nigeria (CNS) – Nigerian President Muhammadu Buhari told West African bishops he appreciated Pope Francis’ encyclical “Fratelli Tutti” for proposing some of the boldest and most radical ideas on securing human unity, peace and security. “Peace cannot reign in our region if it does not first reign in our communities and countries. This is why I think that the theme of this summit is especially apt,” the president said in a message read by Vice President Yemi Osinbajo. The president’s message was delivered on May 3 at the opening of the Reunion of Episcopal Conferences of West Africa, meeting on the theme “Fratelli Tutti: Path to Build Brotherhood and Sustainable Peace in West Africa.” Buhari said the basis of the encyclical – “the idea that fraternity and social friendship are the ways to build a better, more just and peaceful world with the commitment of all people and institutions” – was especially needed in today’s times. He said people of faith should look upon diversity as a gift, not as a cause of conflict. “By offering concrete prescriptions on building brotherhood and sustainable peace anywhere, the encyclical ‘Fratelli Tutti’ rightly takes the position that this is not merely the business of governments and political institutions; it must also be anchored on our civil societies, of which the faith communities are an important constituency.”

MEXICO CITY (CNS) – A report approved by Nicaragua’s national assembly proposes toughening the penalties for “undermining national integrity” and could mean the eventual prosecution of priests and other civil society leaders for alleged involvement and support for protests. The report was presented by the justice and government commissions and approved by the assembly on May 4. It proposes lengthening prison sentences for people convicted of “undermining national integrity and hate crimes” and confiscating property “used or acquired in the commission of the crime of treason, crimes that compromise the peace, crimes against the political constitution,” media outlet Canal 12 reported. The document was officially titled: The Work Report on the Analysis of the Legal Norms Applicable to Persons Who Commit Crimes Undermining National Integrity, Hate Crimes, Among Others. It included the participation of state institutions such as the national police, elected officials and “supposed victims” of the protests erupting in 2018, according to media reports. Those protests called for the ouster of President Daniel Ortega, who refused to step aside or find a political solution. The Catholic Church attempted to facilitate a dialogue, but found the effort fruitless as the Ortega regime refused to fully cooperate. The church also provided shelter and protection for protesters coming under attack – and has subsequently supported the families of political prisoners. The lawmaker presenting the document, María Auxiliadora Martínez, spoke ominously of the role of priests, saying, “The character in which they committed the crimes was not as pastors nor as representatives of Christ,” according to media reports.

MIAMI (CNS) – The May 2 leaked draft of an opinion in the upcoming Supreme Court’s abortion decision demonstrates the use of normal partisan fighting tactics seen in the other branches of government on a regular basis. The opinion draft, written by Justice Samuel Alito, shows that the court appears set to overturn its Roe v. Wade decision – which legalized abortion for nearly 50 years – in its Dobbs v. Jackson Women’s Health Organization decision. The draft document, now considered authentic, was well-written and a good legal argument, but the Supreme Court has suffered in this apparent effort to undermine its legitimacy, said John Yoo, Emanuel S. Heller Law Professor at the University of California, Berkeley and Law Clerk to Justice Clarence Thomas in 1994-95. “If it shows anything, it shows that the critics of Roe who said that Roe has politicized the court and politicized our constitutional law are proven right by this leak itself,” Yoo said in a May 3 online forum sponsored by the Notre Dame Center for Citizenship and Constitutional Government. He added that openly bare-knuckled partisan tactics have publicly arrived at the court. “It’s coming home to roost at the Supreme Court because there are people who leaked this opinion who think Roe is more important as a political value than the institutional integrity of one of the three branches of government,” Yoo said in a virtual forum with two academics from Notre Dame.

MEXICO CITY (CNS) – The Society of Jesus has suspended a prominent Chilean priest as it investigates accusations with a “sexual connotation,” according to the Jesuits. In a statement on May 3, the Jesuit province in Chile said a complaint was received on April 28 “from an adult woman against Jesuit Father Felipe Berríos for acts of sexual connotation. Such events would have occurred when the complainant was a minor.” The accusations against Father Berríos shocked Chile, where the Jesuit has become a voice for the poor and excluded, including many migrants suffering discrimination. Father Berríos lived in a migrant camp in the northern Chilean city of Antofagasta since 2015, after returning from missionary work in Africa with Jesuit Refugee Service. The statement said the provincial in Chile, Jesuit Father Gabriel Roblero, ordered the opening of a preliminary canonical investigation on May 2 and named a lay lawyer to lead the investigation. “The Company of Jesus will have all the necessary means so that this investigation is carried out with the greatest rigor and speed, in order to clarify the reported facts and possible responsibilities,” the statement said. “While the canonical investigation is being completed, the provincial has ordered the suspension of the public exercise of Felipe Berríos’ priestly ministry.” 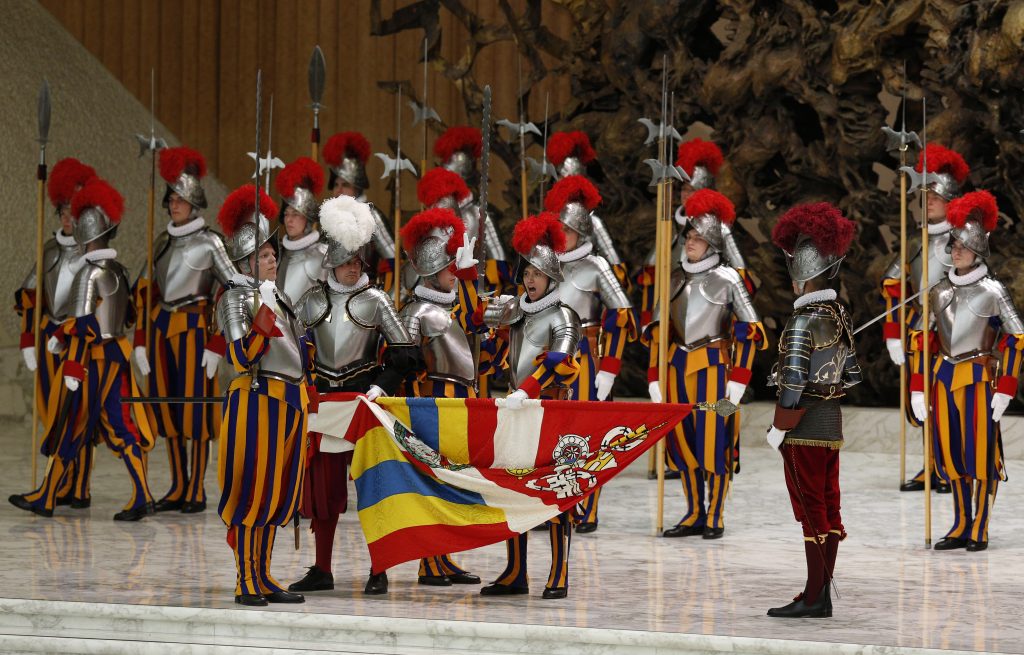 A Swiss Guard recruit takes his oath during the induction ceremony for 36 new guards in the Paul VI hall at the Vatican May 6, 2022. The ceremony is held on May 6 to mark the date in 1527 when 147 Swiss Guards lost their lives defending Pope Clement VII in the Sack of Rome. (CNS photo/Paul Haring)