MANILA, Philippines (CNS) — Thousands of Filipino Catholics walked in the heat of the sun for about four hours to mark the 400th anniversary of the arrival of the image of Our Lady of Mount Carmel in the Philippines. People gathered as early as 2 a.m. May 4 to relive the arrival of the image from Mexico in 1618 with the third mission of the Augustinian Recollects. Several streets in Manila were closed to give way to the “Salubong” and “Traslacion,” literally the “meeting” and “transfer,” respectively, of the image from the Bay of Manila to the Minor Basilica of San Sebastian in Manila’s Quiapo district. The procession passed through the district to “meet” the image of the Black Nazarene at the basilica. Teary-eyed devotees sang and offered prayers during the re-enactment of the historic arrival of Mary’s image in the city. The meeting of the images was iconic because aside from simulating the moment when Jesus meets Mary as He carries the cross to His crucifixion, it served to reconnect two statues that had the same origin. Ysabel de Dios, a tour guide at the basilica, said both images were brought by the Augustinian Recollects from Mexico and were stored in the same church.

OXFORD, England (CNS) — A Catholic bishop from the Republic of Congo lamented that persistent corruption and poverty have left many of priests hungry and ill while the country’s wealth remains dominated by a “handful of the rich and powerful.” Bishop Bienvenu Manamika Bafouakouahou of Dolisie said the Church in the violence-torn country faces “challenges from syncretism, Protestant sects and Islam, but above all from disease. Only two of our dioceses, Brazzaville and Pointe-Noire, can pay their priests appropriately while others struggle,” he explained in an interview with Aid to the Church in Need. “In my own, the first concern is to ensure priests get enough food. But if they have serious health problems, I have no idea what we do.” The diocese lacked clean drinking water and local adults and children at the Catholic school routinely died from waterborne illnesses, the bishop said. Further, he added, poverty had worsened because of a decline in oil prices and widespread corruption and public hospital employees had been on strike for months over government failure to “subsidize basic medicines.”

WASHINGTON (CNS) — Jesuit Father Patrick Conroy, chaplain for the U.S. House of Representatives who said he had been forced to resign, was reinstated to his post by House Speaker Paul Ryan May 3. The priest was reinstated after a letter he wrote to Ryan, R-Wisconsin, became public. In the letter, Father Conroy said he wished to retract his resignation letter and continue working during this Congress “and beyond. I have never been disciplined, nor reprimanded, nor have I ever heard a complaint about my ministry during my time as House Chaplain,” his letter said. He also mentioned displeasure that Ryan hadn’t spoken to him directly but had his chief of staff ask for his resignation. In a statement, Ryan said his original decision was made with what he thought was in the best interest of the House, but he now decided that “a protracted fight over such an important post” would not be good for the body and so he accepted the priest’s letter and decided he could remain in his position. Ryan, who is Catholic, was expected to meet with Father Conroy May 8 when the House reconvened.

MANILA, Philippines (CNS) — Cardinal Luis Antonio Tagle called for church bells in the archdiocese to toll at 8 p.m. each day to protest the continuing spate of killings in the country. He said the tolling of the bells will “haunt the perpetrators of violence and killing to remember their victims, never to forget them,” reported ucanews.com. “The bells beckon us to remember the dead … and to ask God to remember them,” said a statement from the cardinal. Ucanews.com reported a Catholic priest and a broadcast journalist were the most recent victims of assassinations. Father Mark Ventura was shot to death after celebrating Mass in Cagayan province April 29. Cardinal Tagle invited the faithful “to pause, remember and pray” for Father Ventura, the second priest to be killed in four months. In December, Father Marcelito Paez was shot dead in the province of Nueva Ecija. “It’s sad that a priest was killed … and even if he’s not a priest, a person. Isn’t he a gift from God? Is it that easy nowadays to just kill and throw someone away?” asked Cardinal Tagle.

VATICAN CITY (CNS) — For more than 50 years, the writings of retired Pope Benedict XVI on the relationship between faith and politics have insisted that the measure of human freedom is the extent to which each person acknowledges being dependent on the love of God, Pope Francis wrote. The future pope’s “direct experience of Nazi totalitarianism led him from the time he was a young academic to reflect on the limits of obedience to the state in favor of the freedom of obedience to God,” Pope Francis commented in the preface to a new book. “Liberating Freedom: Faith and Politics in the Third Millennium” is a collection of essays written over the course of several decades, including during Pope Benedict’s eight years as pope. It is scheduled to be published in Italian by Cantagalli in May 11. The website Vatican Insider posted Pope Francis’ preface May 6 and Vatican News posted an English translation the next day. Pope Francis said that when Cardinal Joseph Ratzinger worked alongside St. John Paul II, “he elaborated and proposed a Christian vision of human rights capable of questioning on a theoretical and practical level the totalitarian claim of the Marxist state and the atheist ideology on which it was based.” 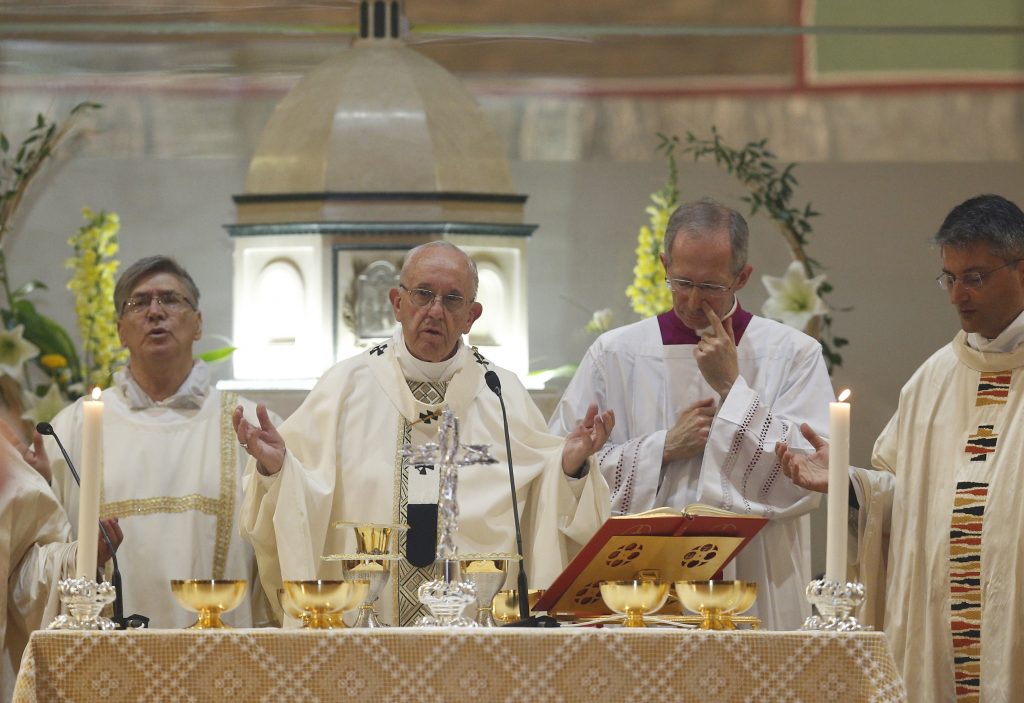