No ‘Hesburgh’ picture without ‘Catholics vs. Convicts,’ filmmaker says

WASHINGTON (CNS) — Patrick Creadon, who made the new documentary “Hesburgh” about Holy Cross Father Theodore Hesburgh, the priest who led the University of Notre Dame for 35 years, said that film wouldn’t have been possible had it not been for a feature he made three years earlier for ESPN, “Catholics vs. Convicts.” The latter documentary chronicled the buildup to a legendary Notre Dame vs. Miami football game played at Notre Dame in 1988. Both teams were undefeated, Notre Dame won 31-30, and the infamous T-shirt that gave the film and the rivalry its nickname had been made by Creadon’s roommate at Notre Dame, where both were seniors. The show debuted on ESPN in 2016. Father Hesburgh had died the year before. “I was on campus a lot. I started thinking a lot about him, and what his life was and what his life means,” Creadon told CNS in an April 25 telephone interview from Chicago. “I started thinking this is the kind of movie that might never get told.” Instead, Creadon and his crew spent two and a half years making “Hesburgh,” which opens May 3 in 35 U.S. cities with the promise of more cities in following weeks. “I never thought of his story as just a Notre Dame story. I always thought of it as an American story.” Creadon said: “I think the fact that we had made the ESPN film really helped us.” He described it as “an olive branch” to the two schools, even getting a handwritten thank-you note from Jimmy Johnson, then the Miami coach, who is now a studio analyst on the Fox network for pro football.

CHICAGO (CNS) — Rocio Carballo came all the way from Belize to attend the National Catholic Education Conference April 23-25 at McCormick Place Convention Center in downtown Chicago. It was her seventh year attending the convention. “In my first year, I thought it would be aimed only to teachers, but it’s more than that. I’ve appreciated the focus on leadership skills and financial oversight for people like me,” said Carballo, who is president of Sacred Heart College, a high school and junior high school with 1,550 students and 135 staff. More than 9,000 educators and leaders from dioceses around the country and beyond attended this year’s conference, along with 700 vendors. They took part in hundreds of sessions on topics focused on religion, technology, leadership, curriculum development, trauma, finances and prayer. There are 1.8 million students enrolled in Catholic schools across the country, according to the National Catholic Education Association. Carballo said she is taking home information about both marketing Catholic schools and effectively using digital media in the classroom. “I attended sessions that showed us how to retain our students and, most importantly, how to market our Catholic institutions and continue to uphold the institutional excellence,” she said.

WASHINGTON (CNS) — What would American society look like if the Supreme Court’s Roe v. Wade ruling, which legalized abortion on demand, were overturned? Panelists at a May 1 symposium sponsored by Americans United for Life stopped short of predicting when that would happen to the 1973 ruling, even with two new conservative justices, Neil Gorsuch and Brett Kavanaugh, on the Supreme Court. But all agreed that the language of the decision — based on the medical knowledge about fetal development in the early 1970s and lacking a strong constitutional foundation while asserting a constitutional right to terminate a pregnancy — has rendered it obsolete. “The Supreme Court needs to wake up,” said Catherine Foster, president of Americans United for Life. “Roe is long past its expiration date and the American public knows it.” Americans United for Life, formed in 1971, has adopted an approach chipping away at the ruling. Last year, Clarke Forsythe, senior counsel of the organization, published a draft opinion for overruling Roe. Charmaine Yoest, vice president of the Institute for Family, Community, and Opportunity at the Heritage Foundation, said the symposium’s goal in part was to rebut the idea of “reliance interest,” meaning, “American women have to come to believe that they need to rely on abortion in order to ensure their place in society.”

QUEBEC CITY (CNS) — The Quebec government is preparing to adopt what would become the most stringent secularism legislation in Canada, hoping to end more than a decade of acrimonious debates about religion’s place in the public space. Religious groups fear, however, that the legislation will be detrimental to their fundamental rights regarding freedom of worship. Simon Jolin-Barrette, minister of immigration, diversity and inclusion, introduced Bill 21 in the National Assembly of Quebec March 28. The draft prohibits wearing religious symbols, such as a cross, a veil or a kippah, for some people “in the performance of their duties.” School teachers, as well as persons with authoritative power, such as judges or police officers, will not be allowed to wear a religious symbol. Jolin-Barrette indicated, however, that the prohibition does not apply to persons already “in office at the time of the presentation of the new piece of legislation.” He explained that the bill requires every government employee to not cover his or her face and says that any citizen who wishes to obtain a service must have their face uncovered to allow for verification of identity or for safety reasons. The draft is based on four principles: the separation of the state and religions, the religious neutrality of the state, the equality of all citizens and freedom of conscience and religion.

Christians’ first mission is to witness that God is love, pope says

SOFIA, Bulgaria (CNS) — God is love, but too many Christians live their faith in a way that undermines any attempt to communicate that essential fact to others, Pope Francis said. Celebrating a late afternoon Mass May 5 in Sofia’s Battenberg Square, the pope wore over his chasuble a gold-embroidered, Byzantine-style stole given to him that morning by Prime Minister Boyko Borissov. The pope’s homily focused on the day’s Gospel reading about the disciples’ miraculous catch of fish after the risen Jesus told them to try again even though they had caught nothing all night. After the resurrection, the pope noted, “Peter goes back to his former life” as a fisherman and the other disciples go with him. “The weight of suffering, disappointment and of betrayal had become like a stone blocking the hearts of the disciples,” he said. “They were still burdened with pain and guilt, and the good news of the Resurrection had not taken root in their hearts.” 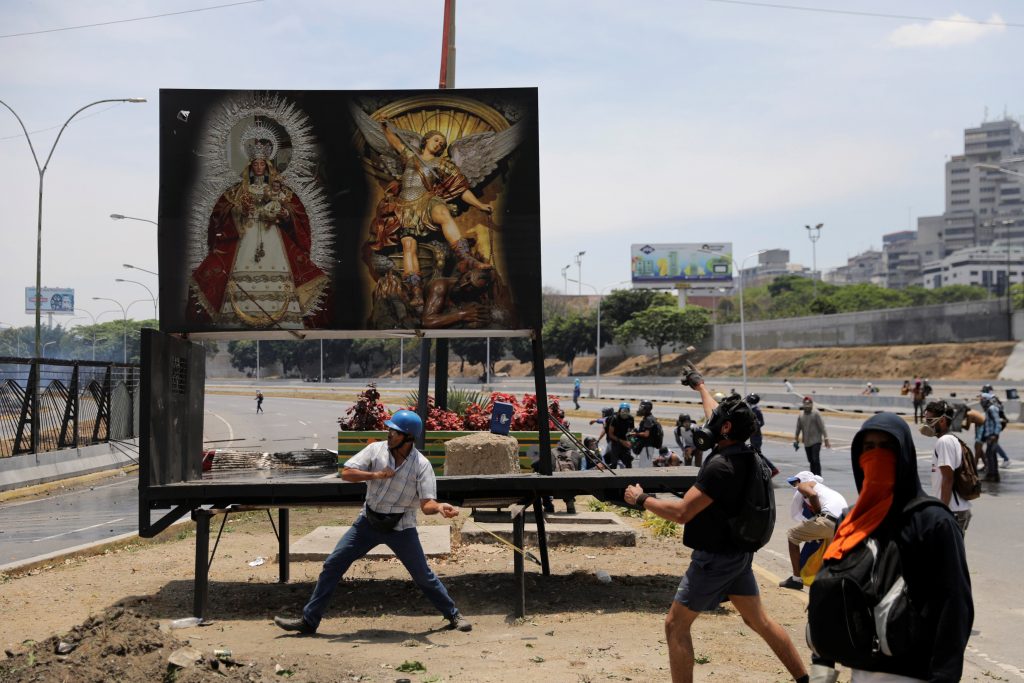 Supporters of Venezuelan opposition leader Juan Guaido throw stones at riot police in front of images of Mary and the Christ Child and Michael the Archangel May 1, 2019, in Caracas. While protests against Venezuelan President Nicolas Maduro raged across the country, National Guard forces loyal to the embattled head of state launched tear gas at churchgoers attending Mass at a local parish. (CNS photo/Manaure Quintero, Reuters)