WASHINGTON (CNS) — The Trump administration Feb. 22 finalized its “Protect Life Rule” preventing funds appropriated under the Title X Family Planning Program from being used in services that include abortion as a method of family planning or that make abortion referrals. It bars Title X grant money from any clinic that performs abortion, which will especially impact Planned Parenthood, the nation’s largest abortion provider. According to the organization’s website, Planned Parenthood affiliates receive roughly $290 million in Title X funds and serve about 41 percent of those who benefit from Title X funding. “The Title X Program can now finally return to its originally intended purpose — the provision of family planning services, not abortions,” said Rep. Chris Smith, R-New Jersey, who is chair of the Congressional Pro Life Caucus. “Title X funding was never intended to facilitate Planned Parenthood’s hideous dismemberment, chemical poisoning or deliberate starvation and forced expulsion of a defenseless unborn baby,” he said in a statement. He applauded the Trump administration for affirming “human life and dignity with this pro-child rule.” The Office of Population Affairs, which is part of the U.S. Department of Health and Human Services and oversees Title X, published the draft final rule the afternoon of Feb. 22. It is slated to go into effect 60 days after it is published in the Federal Register.

CHICAGO (CNS) — With February being both Black History Month and Catholic Press Month, Daniel Rudd’s story is worth knowing. A pioneering Catholic journalist, he founded the national black newspaper the American Catholic Tribune and also was the founder of what is today the National Black Catholic Congress. Rudd was born on Aug. 7, 1845, in Bardstown, Kentucky, to slave parents Robert and Elizabeth Rudd. His parents were Catholic, and he and all of his 11 siblings were baptized. It is unclear how Rudd’s faith became so important to him, but it is clear that it did. “I have always been a Catholic and, feeling that I knew the teachings of the Catholic Church, I thought there could be no greater factor in solving the race problem than that matchless institution whose history for 1,900 years is but a continual triumph over all assailants,” Rudd wrote in his newspaper. Following the Civil War, he moved to Springfield, Ohio, where his brother lived and where he attended high school. In 1885, he began his first newspaper, the Ohio Tribune. Later that year, he expanded its mission and changed the name to the American Catholic Tribune, the first national Catholic newspaper owned and operated by a black man. “We will do what no other paper published by colored men has dared to do — give the great Catholic Church a hearing and show that it is worthy of at least a fair consideration at the hands of our race, being as it is the only place on this Continent where rich and poor, white and black, must drop prejudice at the threshold and go hand in hand to the altar.”

Vatican official to meet in Texas with border bishops from U.S. and Mexico

WASHINGTON (CNS) — Border bishops from the U.S. and Mexico, along with representatives from various Catholic social justice groups, will gather in El Paso, Texas, Feb. 25-27 for an emergency meeting on recent immigration developments in the region. Dylan Corbett, executive director of El Paso’s Hope Border Institute, which is helping to organize the event, said the deaths of two migrant children, sudden releases of migrants by immigration officials, the crackdown on asylum-seekers and President Donald Trump’s recent national emergency declaration precipitated the emergency gathering. “It speaks to the urgency of the moment,” he said in a Feb. 22 telephone interview with Catholic News Service. Father Robert Stark, of the Vatican’s Migrants and Refugees Section, will join the meeting with bishops who tend to populations along the border in the United States and Mexico. At least 14 bishops, including many from the dioceses of Brownsville and El Paso, Texas, the Diocese of Las Cruces, New Mexico, and the Archdiocese of San Antonio, plan to attend, along with representatives from the U.S. Conference of Catholic Bishops and a gamut of faith-based organizations that focus on social justice. Corbett said the meeting will help groups strategize and unite efforts to confront some of the issues surrounding the treatment and perception of migrants, including xenophobia and racism. The gathering also will include a public event open to people of all faiths — a blessing of the desert, a place where many migrants have died or where its dangers later led to death, Corbett said.

WASHINGTON (CNS) — Amid current discussion that the Supreme Court could possibly overturn Roe v. Wade, the decision legalizing abortion, some states are currently working to make sure their laws legalizing abortion are secure, while other states are trying to pass laws to further restrict or ban the procedure. There are about 20 suits challenging state laws restricting abortion that could make their way to the Supreme Court. The current mood “is calling for us to have a new energy and new zeal to win the culture,” said Archbishop Joseph F. Naumann of Kansas City, Kansas, chairman of the U.S. Conference of Catholic Bishops’ Committee on Pro-Life Activities. The archbishop told Catholic News Service that many states are now in “somewhat of a panic attack,” stressing that states which support legal abortion want to “keep it intact” if Roe v. Wade is overturned. In this environment, he said, it is important for pro-life activists to “ramp up our efforts on every level.” He called on Catholics to get involved in local Right to Life chapters or with state Catholic conferences to have direct interaction with state legislators. But the archbishop also said lobbying efforts alone are not enough. “Legislation can be lost as quickly as it is gained,” he said, stressing that public policy is important but that winning the “hearts and minds” of the American public is key, pointing out that the Church is involved in the political sphere primarily to form people’s consciences.

LIMA, Peru (CNS) — Throughout Latin America, people whose lives and land have been affected by industries that extract natural resources, such as mining or oil operations, find strength in their spirituality, church leaders say. “In many communities, there is a profound bond between the people, as community, and the presence of God expressed in the land, the trees, the rivers,” said Moema Miranda, a lay Franciscan who heads the Churches and Mining Network in Latin America. That understanding has become stronger since Pope Francis issued the encyclical “Laudato Si’, on Care for Our Common Home” in 2015. “Pope Francis says that everything is interrelated, and that human beings have an intrinsic value” that is often overlooked in cases where mining companies come into conflict with local communities, Miranda said. The most recent example was the collapse of a dam that sent a flood of toxic water and mud cascading through a valley in Brumadinho, in the Brazilian state of Minas Gerais, Jan. 25. The disaster at the Vale mining company’s Feijao Mine left more than 150 people confirmed dead and at least as many missing in what Brazilian Bishop Walmor Oliveira de Azevedo of Belo Horizonte called “a criminal tragedy.” 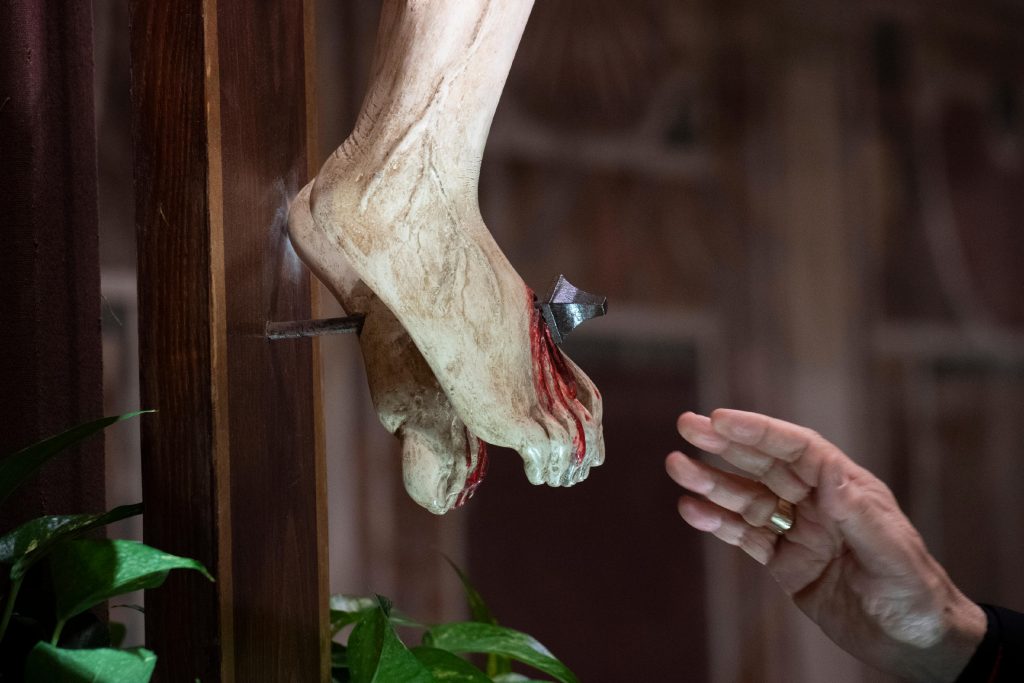 A prelate reverences the crucifix during a penitential liturgy held as part of the meeting on the protection of minors in the church at the Vatican Feb. 23, 2019. The summit brought together the pope and 190 church leaders — presidents of bishops’ conferences, the heads of the Eastern Catholic churches, superiors of men’s and women’s religious orders and Roman Curia officials. (CNS photo/Vatican Media)