WASHINGTON (CNS) — Justice is what George Floyd and his family and friends deserve, and justice “through equal and fair treatment under the law is what every person in this country deserves,” said the U.S. bishop who is president of the National Black Catholic Congress. “Justice brings about peace, and peace allows love to flourish,” Auxiliary Bishop Roy E. Campbell of Washington said in a June 3 statement. He decried the racism on display in graphic detail in the now widely circulated video of a white officer “who refused to acknowledge a fellow human being’s cries of distress” while he had Floyd, an African American, pinned down on a Minneapolis street by holding his knee on Floyd’s neck for nearly nine minutes May 25. “I can’t breathe,” Floyd gasped several times as he was held down. He appeared to lose consciousness or die and was later declared dead at the hospital. Bishop Campbell said the National Black Catholic Congress “joins the nonviolent calls and protests for a complete and transparent investigation of the killing of Mr. Floyd in Minneapolis.” He added: “Each of us must commit ourselves to the untiring pursuit of justice, peace and love for every person in this country; because, together every person in this country makes us the United States of America.” 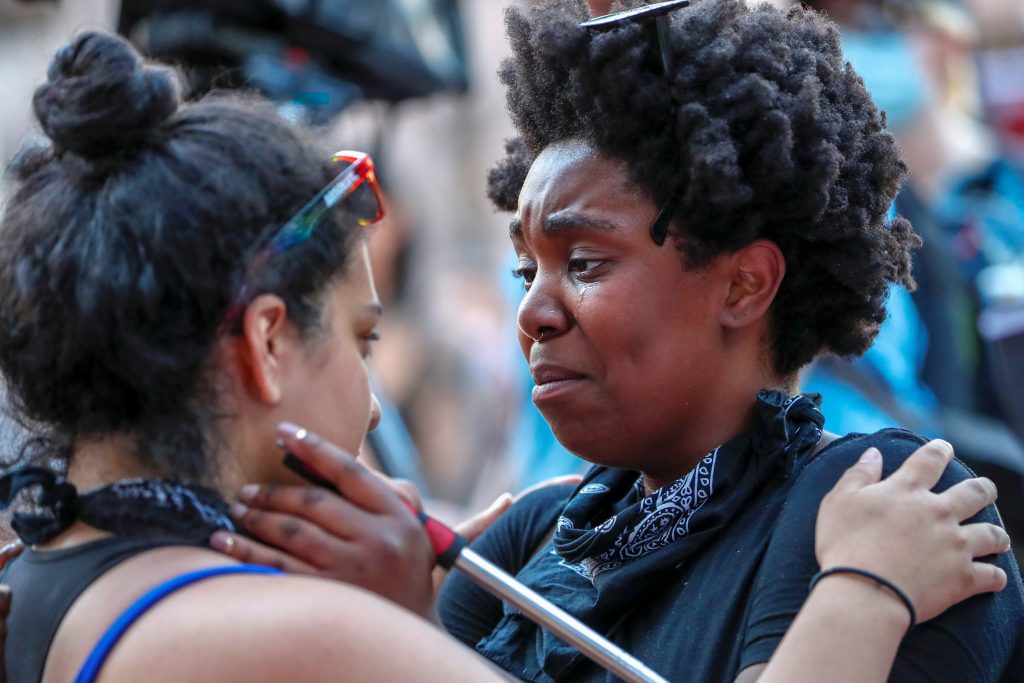 Women embrace during a protest outside Hennepin County Government Center in Minneapolis May 29, 2020, following the death of George Floyd, an unarmed African American man whose neck was pinned to the ground by police for more than eight minutes before he was taken to the hospital. (CNS photo/Eric Miller, Reuters)

WASHINGTON (CNS) — Pope Francis used his June 3 audience and a phone call with the president of the U.S. Conference of Catholic Bishops to express his solidarity and support following days of demonstrations protesting the killing of George Floyd in Minneapolis. In a June 3 letter to his fellow bishops, Archbishop Jose H. Gomez of Los Angeles told them Pope Francis had called him “to express his prayers and closeness to the Church and people of the United States in this moment of unrest in our country.” Archbishop Gomez wrote that the pope “thanked the bishops for the pastoral tone of the Church’s response to the demonstrations across the country in our statements and actions since the death” of Floyd. The pope also said he was praying for Archbishop Bernard A. Hebda and the Church of St. Paul and Minneapolis, Archbishop Gomez wrote. Archbishop Gomez thanked the pope “for his prayers and strong words of support at the conclusion” of his Wednesday general audience. In his livestreamed June 3 general audience, the pope said, “Today I join the Church in St. Paul and Minneapolis, and in the entire United States, in praying for the repose of the soul of George Floyd and of all those others who have lost their lives as a result of the sin of racism.”

Unable to catch a break, Central America battles a pandemic and a storm

WASHINGTON (CNS) — As if battling a pandemic weren’t enough, three of the poorest countries in Central America now are having to simultaneously face the aftermath of strong tropical storms. As of June 3, at least 28 people were reported dead and many others missing after Tropical Storm Amanda swept into the region May 31, destroying houses, overflowing rivers and wiping away roads, leaving thousands homeless, many of them taking refuge in shelters in El Salvador, Honduras and Guatemala. The region is once again expected to be drenched, this time by Tropical Storm Cristobal, June 6 and 7. El Salvador was the hardest hit of the three countries, with 22 deaths. Guatemala reported two fatalities and Honduras four. News organizations said almost 25,000 people have been affected in the three countries. Some of the first victims in El Salvador included an 8-year-old boy who died as the storm toppled one of the walls of his house, a mother who was carried away by raging waters while trying to rescue her two children, and a driver whose taxi was swept away, according to local reports. Organizations such as Catholic Relief Services face complications in helping the communities because of the ongoing pandemic restrictions set by local governments, limiting movement across localities as a way to stop the spread of the coronavirus.

Bishops: When life is hard, Holy Spirit ‘descends to core’ of suffering

PHILADELPHIA (CNS) — The hope of Pentecost “is real” and “it is being realized” with the feast coinciding “with an apparent decline of the pandemic and a loosening of quarantine restrictions,” said members of the hierarchy of the Ukrainian Catholic Church in the U.S. “We greet you on the joyous feast of Pentecost — the birth of the Church — and the rebirth of nature,” they said in a pastoral released May 30, the day before Pentecost. “We are enabled to celebrate the birth and renewal of the church by again attending Divine services — if not today then, by God’s grace, tomorrow,” the bishops said. “Saying ‘Happy Birthday” to our Mother Church, born out of the gift of the Holy Spirit,” they added, “we are also privileged to observe how life returns to our houses of worship as they refill with people, our chants, incense and candlelight.” Issuing the pastoral were: Metropolitan-Archbishop Borys Gudziak of the Archeparchy of Philadelphia, who is metropolitan of Ukrainian Catholics in the U.S.; Bishop Paul P. Chomnycky of the Eparchy of Stamford, Connecticut; Bishop Benedict Aleksiychuk of the Eparchy of St. Nicholas in Chicago; Bishop Bohdan J. Danylo of the Eparchy of St. Josaphat in Parma, Ohio; and Auxiliary Bishop Andriy Rabiy of the Archeparchy of Philadelphia. In Christ’s resurrection, the faithful “overcome all obstacles to encounter, reconciliation and union with God and all of God’s children,” they wrote. “No COVID, no isolation, no death, is stronger than the healing and uniting Spirit of God, ‘who renews the face of the earth’” (Ps 104:30).

KAMPALA, Uganda (CNS) — At the annual Uganda Martyrs Day Mass, shared through video, Catholics were urged to remember two nuns who were healed of bubonic plague through the martyrs’ intercession. Archbishop Cyprian Kizito Lwanga of Kampala asked Catholics around the world to pray for an end to COVID-19 through the intercession of the Uganda Martyrs. The martyrs are a group of 22 Catholic and 23 Anglican converts to Christianity in the historical kingdom of Buganda, now part of Uganda; they were executed in the late 1800s. The pilgrimage to the Catholic shrine at Namugongo, near Kampala, started 100 years ago after the beatification of the martyrs, the archbishop said. In his livestreamed sermon for the June 3 celebration, he told the story of the sisters’ cure. In 1941, two sisters buried one of their fellow nuns who had died of bubonic plague while at the convent for the Missionary Sisters of Our Lady of Africa in Kampala. The two sisters became infected and “everyone knew they would die,” Archbishop Lwanga said. “Miraculously, they were cured,” he said, noting Vatican-commissioned specialists concluded that not only was the medicine the nuns were taking ineffective, but that even if it had been effective, it could not have restored their health in such a short time. Apart from Ugandans and pilgrims from neighboring countries, people from as far away as the United States, Mexico, Italy, Ireland, Singapore and Canada have attended Mass at the shrine in previous years.

Meghan Markle urges Catholic high school graduates to help rebuild nation
WASHINGTON (CNS) — Meghan Markle virtually returned to her alma mater, Immaculate Heart of Mary High School in Los Angeles, for a surprise graduation speech June 3. The six-minute address by the Duchess of Sussex focused on the current moment in the country amid protests against racial injustice following the May 25 death of George Floyd. She said the graduating seniors of the all-girls school would have to play a part in the country’s rebuilding. “I know sometimes people say, ‘How many times do we need to rebuild?’” Markle said. “Well, you know what? We are going to rebuild and rebuild and rebuild until it is rebuilt. Because when the foundation is broken, so are we.” Markle, who grew up in the Los Angeles area, recently moved back there with Prince Harry, the Duke of Sussex, and their son, Archie, when the couple stepped back from their roles with British royal family. She graduated from Immaculate Heart of Mary in 1999. The school, founded in 1906 by the Sisters of the Immaculate Heart of Mary, is located just a few miles from the landmark Hollywood sign.

USCCB migration chairman says Senate needs to act on ‘Dreamer,’ TPS bill
WASHINGTON (CNS) — The chairman of the U.S. bishops’ Committee on Migration has urged the U.S. Senate to take action and pass a bill to protect “Dreamers” and as well beneficiaries of the Temporary Protected Status and Deferred Enforced Departure programs. Washington Auxiliary Bishop Mario E. Dorsonville’s statement, issued late June 4, came on the first anniversary of House passage of the American Dream and Promise Act, H.R. 6, which provides a pathway to citizenship for those brought to the United States illegally as children by their parents. Best known as “Dreamers,” they are beneficiaries of the Deferred Action for Childhood Arrivals program, or DACA. H.R. 6 also outlines a citizenship path for holders of Temporary Protected Status, or TPS, and Deferred Enforced Departure, known as DED. TPS is a temporary immigration status provided to nationals of specifically designated countries that are confronting an ongoing armed conflict, environmental disaster, or extraordinary and temporary conditions. DED also is a temporary immigration benefit for individuals from countries and regions facing similar situations. “Today, sadly, Dreamers and TPS holders remain vulnerable and without permanent legal status,” Bishop Dorsonville said. “This continued uncertainty for Dreamers and TPS holders comes at a time during the COVID-19 pandemic when many Dreamers and TPS holders are, alongside U.S. citizens, on the front lines providing essential work for our country in health care, food supply and transportation.”