Voters in Ireland pave way for abortion on demand

DUBLIN (CNS) — Voters in Ireland have opted to remove the right to life of the unborn from the country’s constitution, paving the way for abortion on demand up to 12 weeks. Results from the nationwide referendum showed that 66.4 percent of citizens opted to remove the Eighth Amendment from the constitution, while 33.6 percent voted to retain it. Turnout was 64.5 percent. Voters inserted the original amendment in the constitution in 1983 by a margin of 2-1, and it “acknowledges the right to life of the unborn and, with due regard to the equal right to life of the mother, guarantees in its laws to respect, and, as far as practicable, by its laws to defend and vindicate that right.” That text will now be deleted and replaced with an article stating that “provision may be made by law for the regulation of termination of pregnancy.” Minister for Health Simon Harris has said he would introduce legislation that would allow abortion on demand up to 12 weeks, up to 24 weeks on unspecified grounds for the health of the mother, and up to birth where the child is diagnosed with a life-limiting condition that means he or she may not live long after birth.

VATICAN CITY (CNS) — That only men can be validly ordained to the priesthood is a truth that is part of the Catholic faith and will not and cannot change, said Cardinal-designate Luis Ladaria, prefect of the Congregation for the Doctrine of the Faith. “It gives rise to serious concern to see that in some countries there still are voices that put in doubt the definitive nature of this doctrine,” he wrote May 29 in the Vatican newspaper, L’Osservatore Romano. St. John Paul II, confirming the constant teaching and practice of the Church, formally declared in 1994 that “the church has no authority whatsoever to confer priestly ordination on women and that this judgment is to be definitively held by all the church’s faithful.” Cardinal-designate Ladaria said some people continue to question the infallibility of St. John Paul’s declaration in the document “Ordinatio Sacerdotalis” because “it was not defined ‘ex cathedra’” or formally, solemnly proclaimed as infallible. The argument, the cardinal-designate wrote, is that “a later decision by a future pope or council could overturn it.” But “sowing these doubts creates serious confusion among the faithful not only about the sacrament of orders as part of the divine constitution of the church, but also about how the ordinary magisterium can teach Catholic doctrine in an infallible way,” he wrote.

U.S. embassy works with Vatican to promote religious
liberty for all

VATICAN CITY — Callista Gingrich, U.S. ambassador to the Holy See, provided a commentary she wrote to Catholic News Service in connection with the release May 29 of the 2017 International Religious Freedom Report and the announcement at the U.S. State Department about a top-level consultation that will take place in July on promoting religious freedom. In it, she stated that “religious understanding and tolerance are bulwarks against the forces of extremism — they are the necessary foundations of peace and security around the world. The United States advocates for religious freedom at home and abroad. Protecting and defending this integral human right — to worship freely — is fundamental to who we are as a people and as a nation.”

“Protecting religious freedom is one of the top priorities of our diplomatic relationship with the Holy See,” she continued. “The United States and the Holy See wholeheartedly agree that religious freedom is a universal right.” Secretary Pompeo also announced that the U.S. State Department will convene the first-ever Ministerial to Advance Religious Freedom July 25-26 in Washington. The ministerial will bring together nations and faith leaders committed to fully promoting Article 18 of the Universal Declaration of Human Rights, codifying the universal “right to freedom of thought, conscience and religion.”

WASHINGTON (CNS) — In a 7-2 decision June 4, the Supreme Court sided with a Colorado baker in a case that put anti-discrimination laws up against freedom of speech and freedom of religious expression. Justice Anthony M. Kennedy, writing for the majority, said the Colorado Civil Rights Commission had violated the Constitution’s protection of religious freedom in its ruling against the baker, who refused to make a wedding cake for the same-sex couple. Justices Ruth Bader Ginsburg and Sonia Sotomayor dissented. Kennedy noted the case had a limited scope, writing that the issue “must await further elaboration.” Across the country, appeals in similar cases are pending, including another case at the Supreme Court from a florist who didn’t want to provide flowers for a same-sex wedding. The ruling in Masterpiece Cakeshop v. Colorado Civil Rights Commission stems from the case argued before the court last December from an incident in 2012 when Charlie Craig and David Mullins asked the Colorado baker, Jack Phillips, to make a cake for their wedding reception. Phillips refused, saying his religious beliefs would not allow him to create a cake honoring their marriage. The couple filed a complaint with the Colorado Civil Rights Commission, which decided the baker’s action violated state law. The decision was upheld by the Colorado Court of Appeals. The Colorado Supreme Court wouldn’t take the case, letting the ruling stand. The U.S. Supreme Court agreed to hear the case.

Lives changed by restorative justice on open display at
conference

WASHINGTON (CNS) — “B — that’s me,” said Bill Gaertner. He was looking at a screen behind him during a panel presentation at the Catholic Mobilizing Network’s “Redemption and Restoration” conference. On the screen were a number of options conference participants and those viewing it online could choose what drew them to take part. Among the options were prison ministry, being a crime victim or the family member of a crime victim, and working in the legislative arena to bring about change. “B,” which registered zero online votes, stood for ex-offender. Gaertner, now 75, a onetime seminarian and college basketball coach, spent more than eight years in prison on a domestic violence conviction after beating up his second wife. About half of that sentence was spent inside a prison in Hagerstown, Maryland. When he got out, he decided to stay there. He founded Gatekeepers, a program that helps ex-offenders make the transition back to their home communities after serving their prison sentence. “I’m on probation, and I run a program where parole officers and probation officers send their people to me. We do the spiritual works of mercy,” he said. “But we’ve got to do the corporal workers of mercy.” Gaertner’s day has its routine: “I get up at 6, go to Mass, go to Roy Rogers (a small East Coast fast-food chain restaurant), and then I am on the go until midnight.” Gaertner was accepted as an oblate novice at the Benedictine community of St. Anselm’s Abbey in Washington. As a condition of his probation, though, he must let his probation officer know whenever he intends to leave Maryland.

WASHINGTON (CNS) — The U.S. Supreme Court June 4 threw out a lower court’s ruling that allowed a 17-year-old last year to obtain an abortion while she was in a detention center after an illegal border crossing. If the Supreme Court had not acted, the lower court’s ruling could have set a precedent that would have allowed minors in similar situations to obtain abortions. The legal battle began when the detained teenager had sought but was denied permission to leave the government-funded center where she was detained to obtain an abortion, saying she had been raped, found out she was pregnant during the detention and did not want to go through with the pregnancy. The Trump administration objected to allowing her to leave the shelter temporarily for the purposes of obtaining an abortion, and said if she wanted an abortion, she could find a sponsor to get her out of detention or leave the country voluntarily. But an October ruling by a federal judge in Washington said the government couldn’t interfere with the teenager’s access to doctors and such actions infringed on her constitutional rights. Immediately after that ruling, she was allowed to leave the shelter for what government lawyers believed was pre-abortion counseling but she obtained an abortion instead.

VATICAN CITY (CNS) — Pope Francis has asked the Catholic bishops’ conference of Germany not to publish nationwide guidelines for allowing Protestants married to Catholics to receive Communion at Mass, but to continue having diocesan bishops judge specific situations. Greg Burke, director of the Vatican press office, confirmed the authenticity of a letter published June 4 on the Italian blog Settimo Cielo. “The Holy Father has reached the conclusion that the document has not matured enough to be published,” said the letter signed by Cardinal-designate Luis Ladaria, prefect of the Congregation for the Doctrine of the Faith. The prefect had hosted a meeting May 3 with a group of German bishops, including supporters and opponents of the document, and with officials from the Pontifical Council for Promoting Christian Unity and the Pontifical Council for Legislative Texts. A Vatican statement issued at the end of the meeting said, “Pope Francis appreciates the ecumenical commitment of the German bishops and asks them to find, in a spirit of ecclesial communion, a result as unanimously as possible.”

WASHINGTON (CNS) — U.S. Catholics have donated close to $59 million to relief and recovery efforts in response to the destruction caused by three hurricanes that hit the United States and the Caribbean and two earthquakes in Mexico last year. The devastation from these “unprecedented disasters continues to impact the lives of our brothers and sisters in the United States, across the Caribbean and in Mexico,” said Archbishop Thomas J. Rodi of Mobile, Alabama, chairman of the U.S. bishops’ Committee on National Collections. “We are profoundly grateful to the dioceses that took up special collections or made donations,” he said in a May 21 statement. “The support of parishioners is an act of charity and a reflection of love for neighbor. We ask for continued prayers of support for the people affected by these historic natural disasters.” The U.S. Conference of Catholic Bishops in a news release reported the various amounts raised for disaster relief as of mid-May: Hurricane Harvey, $37.2 million; Hurricane Irma, $12.8 million; Hurricane Maria, $6.1 million; and Mexico earthquakes, $3.5 million. 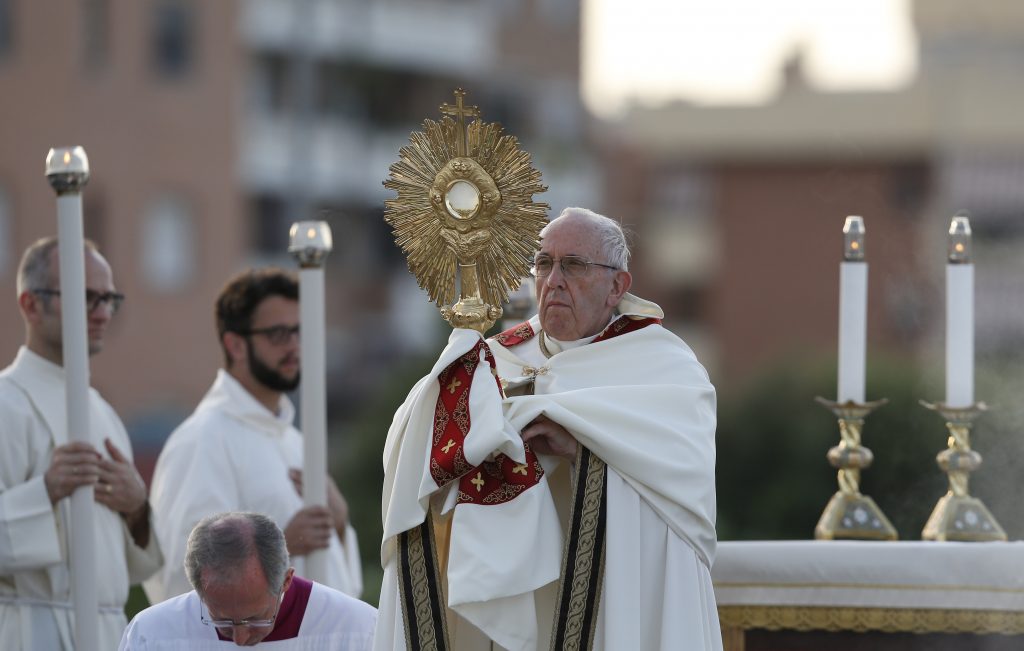 Pope Francis leads Benediction in observance of the feast of Corpus Christi in Ostia, a suburb of Rome, June 3. (CNS photo/Paul Haring)