VATICAN CITY (CNS) — Announcing the themes for the next three local World Youth Day celebrations, Pope Francis called on young men and women to meditate on the path of Christian life that God has called them to walk. Meeting with 280 young people from 109 countries who took part in a post-synod Youth Forum in Rome June 22, the pope said he hoped the themes of the World Youth Day celebrations for the next three years will be a “harmonious coordination” between the synod process and the next international celebration of World Youth Day in Lisbon, Portugal, in 2022. “Do not tune out the voice of God, who urges you to arise and follow the paths that he has prepared for you,” the pope told the young adults. The Dicastery for Laity, the Family and Life had asked bishops’ conferences around the world to identify two young adult leaders to participate in the forum, which was held at a retreat center just south of Rome. The themes for the next three World Youth Days, according to the Vatican, will be: 2020, “Young man, I tell you, arise!” (Lk 7,14) For 2021, “Arise! I have appointed you as a witness of what you have seen.” (Acts 26,16) and for 2022, “Mary arose and went with haste.” (Lk 1:39). The next international celebration of World Youth Day will take place in Lisbon, Portugal, in 2022.

WASHINGTON (CNS) — The State Department’s newly released annual report on international religious freedom shows continued attacks and abuse by governments and societies against religious minorities in their respective countries. The report, issued June 21, collected data on each nation for the year 2018. U.S. embassies “prepare the initial drafts of country chapters based on information from government officials, religious groups, nongovernmental organizations, journalists, human rights monitors, academics, media, and others,” said the report’s introduction. The State Department’s Office of International Religious Freedom collects and analyzes additional information from separate sources as well. The report includes disclaimers. “Specific inclusions or omissions should not be interpreted as a signal that a particular case is of greater or lesser importance to the U.S. government,” the report noted. “The goal is to shed light on the nature, scope, and severity of actions impacting religious freedom through illustrative examples.” A sampling of situations found in the report provide example after example of troubling situations. The full report can found be online at https://bit.ly/2FnW6MS.

Receive Communion every time as if it were the first time, pope says

VATICAN CITY (CNS) — Every time a Catholic receives Communion, it should be like his or her first Communion, Pope Francis said. Marking the feast of the Body and Blood of Christ June 23, the pope spoke about the gift of the Eucharist during his midday Angelus address at the Vatican and at the Rome parish of Santa Maria Consolatrice, where he celebrated an evening Mass and led eucharistic Benediction after a Corpus Christi procession. The feast, he told visitors in St. Peter’s Square, is an annual occasion for Catholics “to renew our awe and joy for the stupendous gift of the Lord, which is the Eucharist.” Catholics should concentrate on receiving Communion with gratitude every time they receive it, he said, rather than approaching the altar “in a passive, mechanical way. We must get used to receiving the Eucharist and not go to Communion out of habit,” the pope said. “When the priest says to us, ‘The body of Christ,’ we say, ‘Amen.’ But let it be an ‘Amen’ that comes from the heart, with conviction.”

VATICAN CITY (CNS) — The members of the Vatican’s women’s soccer team decided not to play their first foreign match June 22 when a couple members of the opposing team lifted their shirts to reveal slogans protesting the Catholic Church’s opposition to abortion. Vienna’s Mariahilf women’s team had invited the new Vatican team to Austria as part of the Vienna team’s 25th anniversary celebrations. But during the playing of the Vatican anthem just before the match was to begin, several members of the Mariahilf team lifted their shirts to show protests painted on their bellies and backs. One said, “My body, my rule.” At the same time, in the stands, someone unfurled a banner reading, “Against homophobia.” Vatican News said, “The protest took by surprise the Vatican players who simply expected a celebration of sports.” Along with their coaches, it added, the women “made the difficult decision not to play the match so as to prevent the manipulation of an event they had prepared with joy.” Just over half of the team members are Vatican employees, the others are the wives or daughters of employees. Male Vatican employees have had teams and an intramural tournament for decades; the women formed their team early in the spring to play five-a-side games, but the match in Vienna was to be a regulation game with 11 players on each team.

Archbishop’s remains moved to Peoria; sainthood cause is reopened

PEORIA, Ill. (CNS) — As a small group of witnesses silently looked on, the mortal remains of Archbishop Fulton J. Sheen were interred at St. Mary’s Cathedral in Peoria late in the afternoon of June 27, completing a transfer from St. Patrick’s Cathedral in New York that began early that morning. Peoria Bishop Daniel R. Jenky was among those present as the casket arrived by hearse at the cathedral where Archbishop Sheen was ordained a priest nearly a century ago. The bishop blessed with holy water a container holding the casket as it was carried up the cathedral steps by nine seminarians and again after it was placed in a new tomb at a side altar dedicated to Mary under the title of Our Lady of Perpetual Help. Earlier in the day, Bishop Jenky announced that the sainthood cause for the famed preacher, media pioneer, author and missionary had resumed after being suspended for five years pending the resolution of a legal dispute over the location of Archbishop Sheen’s remains. Since his death Dec. 9, 1979, at age 84, Archbishop Sheen had been interred in a basement crypt under the main altar of St. Patrick’s Cathedral. Diocese of Peoria officials are hopeful that Pope Francis will soon receive evidence of an alleged miracle attributed to Archbishop Sheen’s intercession. The Peoria diocese opened Archbishop Sheen’s cause for canonization in 2002. His heroic virtue and life of sanctity were recognized in 2012 by Pope Benedict XVI, who granted him the title “Venerable.” 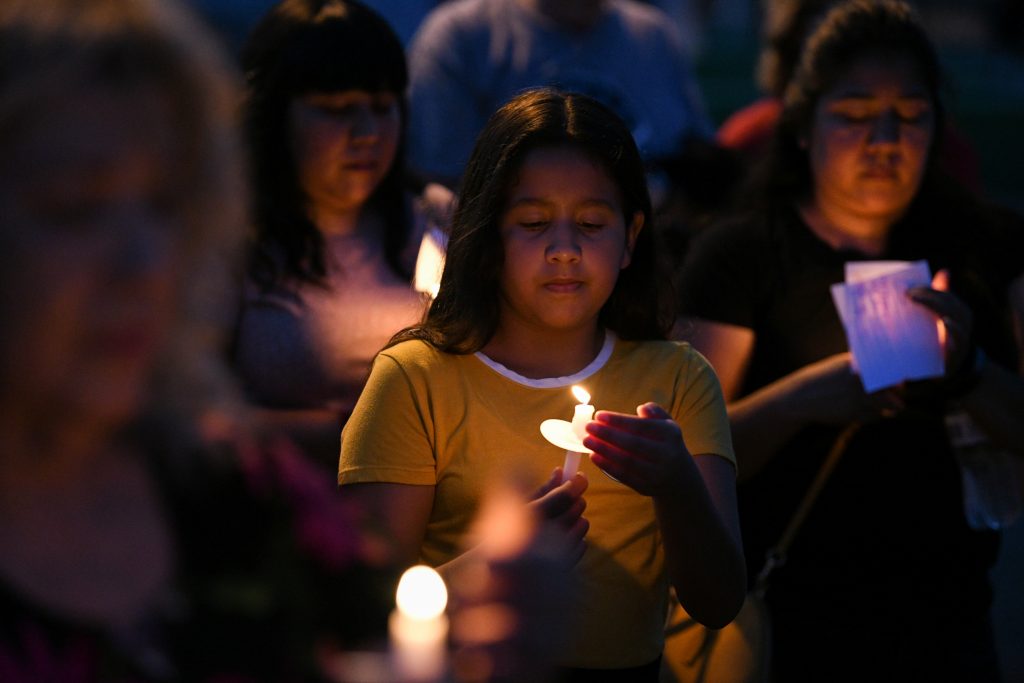 Mourners in Brownsville, Texas, honor the lives of Salvadoran migrant Oscar Alberto Martinez Ramirez and his 23 month-old daughter, Valeria, during a June 30, 2019, vigil. They drowned June 24 in the Rio Grande while trying to reach the United States. (CNS photo/Loren Elliott, Reuters)