WASHINGTON, D.C. (CNS) – The chairmen of two U.S. bishops’ committees said a measure passed by the House on July 15 is “the most unjust and extreme abortion on demand bill our nation has ever seen.” They implored lawmakers “who see abortion as a legitimate ‘solution’ to the needs of women to abandon this path of death and despair,” urging them to join the U.S. bishops in prioritizing “the well-being of women, children and families” by providing material resources and “personal accompaniment” so “no woman ever feels forced to choose between her future and the life of her child.” Archbishop William E. Lori of Baltimore, Chairman of the U.S. Conference of Catholic Bishops’ Committee on Pro-Life Activities, and Cardinal Timothy M. Dolan of New York, Chairman of the USCCB’s Committee for Religious Liberty, made the comments in a joint statement on July 18. In a mostly party-line vote of 219 to 210, House members approved an updated version of the Women’s Health Protection Act of 2022, which would codify a right to abortion in federal law. An earlier version was passed in March by the House, but it failed to pass in the Senate. The bill, H.R. 8296, would impose abortion on demand nationwide at any stage of pregnancy and would eliminate pro-life laws at every level of government – including parental notification for minor girls, informed consent and health and safety protections specific to abortion facilities. “Answering the needs of women by promoting taxpayer-funded elective abortion, as this bill would do, is a grave evil and a failure to love and serve women,” said Archbishop Lori and Cardinal Dolan.

Bishop urges Catholic educators to see importance of the Eucharist

WASHINGTON, D.C. (CNS) – Addressing Catholic educators at an annual national conference, Bishop Thomas A. Daly of Spokane, Washington, urged them to make sure their work was always rooted in the importance of the Eucharist. The bishop, Chairman of the U.S. Conference of Catholic Bishops’ Committee on Catholic Education, said schoolteachers should help their students more deeply appreciate the sacrament amid the current National Eucharistic Revival. Launched on June 19, the feast of Corpus Christi, the revival is a three-year initiative of the USCCB to revitalize Catholics’ understanding of and love for Jesus in the Eucharist. At the National Eucharistic Congress that will close the revival in 2024, Bishop Daly said, “there will be a great emphasis on the work that Catholic schools can do and how they might help the next generation … to appreciate, to know and to love Jesus Christ” in the Eucharist. The bishop gave the opening address of the 10th annual Conference of the Institute for Catholic Liberal Education held July 11-14 at The Catholic University of America in Washington, D.C. A news release from the institute said the annual conference brings Catholic educators together “to deepen their understanding of the nature and purpose of Catholic education and its roots in the classical liberal arts tradition.”

After fires set, pastor encourages people to remember ‘we are the Church’

BETHESDA, Md. (CNS) – A Catholic church in the Washington, D.C. suburb of Bethesda was one of three houses of worship along the same road to be victimized by vandalism the weekend of July 9-10. Firefighters responded at around 2 a.m. on July 10 to multiple fires set inside St. Jane Frances de Chantal Church, which also was vandalized. Twenty-four hours earlier, firefighters responded to multiple fires set outside North Bethesda United Methodist Church a few blocks away. Pete Piringer of the Montgomery County Fire & Rescue Service said in a statement that firefighters found a “significant active fire” inside St. Jane Frances de Chantal, which is in the Archdiocese of Washington, D.C. Piringer added after firefighters extinguished the blaze, investigators determined the fire was arson, with multiple areas set on fire or attempted to be set on fire there. In a tweet, Piringer noted that investigators also found damaged headstones and broken wood pieces scattered near Wildwood Baptist Church, a few blocks beyond the Methodist church. Piringer said an open investigation was underway involving the two fires and noted the similar circumstances, locations and apparent times of the vandalism. No motives or suspects were immediately announced by investigators. The fires and vandalism at St. Jane Frances de Chantal caused Sunday Masses to be shifted to the school gymnasium. Two vans and cleanup crews could be seen outside the church that afternoon.

WASHINGTON, D.C. (CNS) – The U.S. bishops’ pro-life chairman said it is “deeply disturbing and tragic” that President Joe Biden has chosen to use his power as the nation’s chief executive “to promote and facilitate abortion in our country” rather than support resources for pregnant women in need. Biden is “seeking every possible avenue to deny unborn children their most basic human and civil right, the right to life,” said Baltimore Archbishop William E. Lori, Chairman of the U.S. Conference of Catholic Bishops’ Committee on Pro-Life Activities. “Rather than using the power of the executive branch to increase support and care to mothers and babies, the president’s executive order seeks only to facilitate the destruction of defenseless, voiceless human beings,” he said in a July 9 statement. A day earlier, Biden signed an executive order to safeguard access to medication abortion and emergency contraception, protect patient privacy, launch public education efforts as well as strengthen “the security of and the legal options available to those seeking and providing abortion services.” Before signing his executive order, Biden condemned what he called the “extreme” Supreme Court majority for overturning Roe v. Wade. The court’s June 24 ruling came in Dobbs v. Jackson Women’s Health Organization, a challenge to a Mississippi law banning abortion after 15 weeks. In affirming the law 6-3, the high court also voted 5-4 to overturn 1973’s Roe v. Wade ruling, which legalized abortion nationwide, and 1992’s Casey v. Planned Parenthood ruling, which affirmed Roe.

WASHINGTON, D.C. (CNS) – Immigration supporters expressed a mix of gratitude and disappointment with a Biden administration decision on Temporary Protected Status with regard to Venezuelans. On July 11, Department of Homeland Security Secretary Alejandro Mayorkas announced that the agency was extending the length of a humanitarian immigration program for another 18 months for Venezuelans currently eligible for TPS benefits, but did not extend the benefit to those who arrived in the U.S. after March 8, 2021. The move left many organizations puzzled. “Venezuela is a country in turmoil – in the midst of an unprecedented social and economic collapse that has led to hyperinflation, starvation and the second largest migration crisis in the world,” said the Catholic Legal Immigration Network in a July 11 news release. “TPS was established to protect those who are unable to return to their home country, and the ongoing crisis in Venezuela makes it clear that humanitarian protection for Venezuelans remains imperative,” it said. Anna Gallagher, CLINIC’s Executive Director, said the decision leaves approximately 250,000 Venezuelans in the U.S. without relief. DHS said approximately 343,000 individuals “are estimated to be eligible for TPS under the existing designation of Venezuela,” and said it would continue to work with “international partners to address the challenges of regional migration while ensuring our borders remain secure.”

HONG KONG (CNS) – An elderly Catholic missionary in Hong Kong has launched a three-day hunger strike outside a high-security prison demanding the release of politicians and activists incarcerated under the city’s Beijing-imposed controversial national security law. Father Franco Mella, 74, a member of the Milan-based Pontifical Institute of Foreign Missions, has vowed to abstain from food as he started his protest near the Shek Pik prison on Lantau Island in Hong Kong on July 14 amid sweltering summer heat, Reuters reported. “The weather is so hot. So, they are suffering inside, and the message (is) we are with you, do not lose hope. Let us continue to fight for everybody’s freedom,” Father Mella said. With temperatures in the mid- to upper 80s Fahrenheit, the task of abstaining from food has become even more challenging for the priest.

The Milan-born priest arrived in Hong Kong in 1974, and since then has advanced human rights and freedom for the people of the Chinese-ruled city-state. A Hong Kong government spokesperson, however, said the arrests were lawful and based on evidence. “It would be contrary to the rule of law to suggest that people of certain backgrounds could be above the law,” the spokesperson said.

WASHINGTON, D.C. (CNS) – “We call ourselves the first suppliers of first responders,” said Jim Cavnar, president of Cross Catholic Outreach. Based in Boca Raton, Florida, the international Catholic charity has assisted the world’s most vulnerable people with $3.3 billion in total aid in more than 85 countries since its founding in 2001 by Cavnar and a small group of his colleagues. Its disaster relief responses have included building safe homes following devastating earthquakes in Haiti in 2010 and 2021, hurricane relief in places such as Guatemala, Honduras, Nicaragua and the Dominican Republic, and emergency food and medical supplies during the COVID-19 pandemic. And since Russia’s Feb. 24 invasion of Ukraine, the charity has been helping Ukrainian refugees, namely across the border in Poland, and those internally displaced in Ukraine. Most recently, Cross Catholic Outreach provided a cash grant, which funded 816,480 meals destined for these Ukrainians. According to the U.N. High Commissioner for Refugees, since the war began Feb. 24, more than 5.2 million refugees from Ukraine have been recorded across Europe, as of July 4; nearly 1.2 million are in Poland. The agency estimates that 7.7 million people are internally displaced as a result of the conflict, which is equivalent to 17.5% of the entire population. 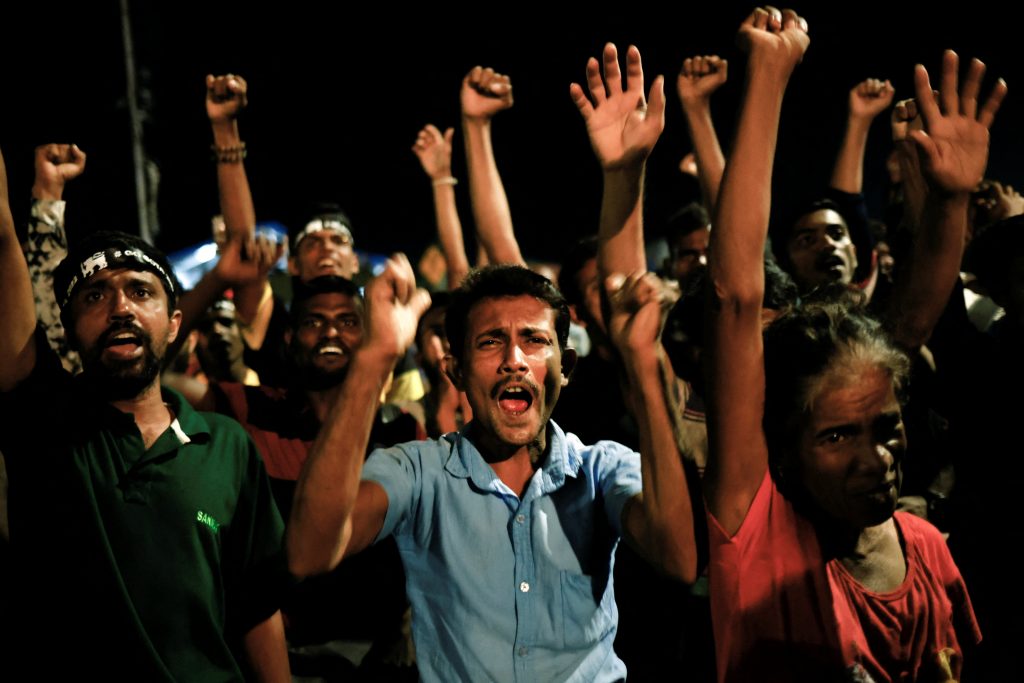 People dance as they celebrate the resignation of Sri Lankan President Gotabaya Rajapaksa during a protest in Colombo July 14, 2022. The formal announcement of Rajapaksas resignation was made in a televised address by the speaker Mahinda Yapa Abeywardena the following morning. (CNS photo/Adnan Abidi, Reuters)