WASHINGTON, D.C. (CNS) – The chairmen of three U.S. Conference of Catholic Bishops’ committees are raising concerns over a proposed rule to revise regulations governing the 50-year-old Title IX law that promotes women’s equality and opportunity in schools and colleges. The proposed revisions, released on June 23 by the Department of Education, would enshrine the rights of LGBTQ students in federal law and would give victims of campus sexual assault new protections. However, the committee chairmen said in a June 29 statement that the proposal “contains many provisions of concern to the church and her ministries, to the faithful and the common good.” The proposed rule requires further study to better assess any future impact, said a joint statement from Cardinal Timothy M. Dolan of New York, Chairman of the Committee for Religious Liberty; Archbishop Salvatore J. Cordileone of San Francisco, Chairman of the Committee on Laity, Marriage, Family Life and Youth; and Bishop Thomas A. Daly of Spokane, Washington, Chairman of the Committee on Catholic Education. “But even at this early stage, it is apparent that the rule’s provisions on discrimination based on ‘pregnancy or related conditions,’ which include ‘termination of pregnancy,’ are intended to have implications for abortion, and therefore, life in the womb,” the bishops said. “And by adding self-asserted ‘gender identity’ to the prohibition against sex discrimination, the rule may foreshadow a threat to women’s athletics, sex-separated spaces, and the right of students, parents, and teachers to speak the truth about the nature of the human person,” they said.

NAIROBI, Kenya (CNS) – The Church will let justice take its course after the High Court in Malawi sentenced a priest to 30 years in prison for the murder of a man with albinism, said Archbishop George Desmond Tambala, president of the Malawian bishops’ conference. Five other suspects were handed life sentences. One of them was the victim’s brother. “We were shocked and we stand by the victims of that very terrible crime,” Archbishop Tambala told Catholic News Service on June 29. “We have offered all the cooperation to see justice is done. We are shocked and we are at pains. We as a Church always preach about justice,” he added. “We have always stood by the people who are victims. We will let justice take its course. We stand by the rule of the law.” The court handed down the sentence on June 27. A judge sitting in the city of Blantyre said Father Thomas Muhosha had planned to sell the body parts of MacDonald Masambuka, 22, violently killed in 2018. Masambuka was lured into a death trap after his killers lied that they had found him a wife. Father Muhosha served in a parish about 60 miles from Blantyre. The victim went missing from his village in southern Malawi in February 2018. Nearly a month later, his burned, limbless body was found buried in a garden at the home of one of his killers.

PHILADELPHIA, Penn. (CNS) – Ukrainian Catholics in Philadelphia and throughout the nation are “(welcoming) the European Union’s courageous step to extend Ukraine candidate status,” said Archbishop Borys Gudziak, head of the Ukrainian Catholic Church in the U.S. Charles Michel, president of the European Council, announced on June 23 that both Ukraine and neighboring Moldova had been granted candidate status, in what he described as a “historic” decision amid the council’s June 23-24 summit in Brussels. “We are sending a very strong message, a message of unity and of geopolitical determination,” said Michel, noting that former Soviet republic Georgia, whose “European perspective” also was recognized, would be also granted candidacy “once certain priorities are addressed.” The European Council is made up of the heads of state of the EU members. Ukraine applied for candidacy four days after Russia’s Feb. 24 invasion, which continues assaults Russia launched in 2014 with the attempted annexation of Crimea and the backing of separatist regions in Donetsk and Luhansk. The latest round of aggression has been marked by particularly gruesome violence against civilians, prompting multinational calls for war crime and  genocide investigations.

WASHINGTON, D.C. (CNS) – Bishop Jude Ayodeji Arogundade of Ondo, Nigeria, is resolute in the wake of tragedy. St. Francis Xavier Church in Ondo, where at least 40 worshippers were slain by terrorists on June 5 during Pentecost Mass, will reopen by the fall. “We’ll resume full activities as it has always been,” Bishop Arogundade told Catholic News Service on June 28 in Washington, D.C., where he attended the International Religious Freedom Summit. No arrests have been made in relation to the massacre. Nigeria has only a federal police system; there are no local or state police investigators. Nigerian bishops have criticized government officials for doing nothing to stem the nation’s increasing violence. Many Nigerians believe ethnic Fulani, who are predominantly Muslim, were responsible for the attack, the first in Nigeria’s Christian-majority South. Fulani extremists have killed Christian farmers in the country’s north and central sections. Bishop Arogundade said Ondo Gov. Rotimi Akerodolu has been an outspoken opponent of the extremists’ plans to turn Nigeria into a Muslim caliphate, and they have been unable to negotiate with the governor.

SAN ANTONIO, Tex. (CNS) – The archbishop of San Antonio offered prayers for dozens of people found dead as well as more than a dozen survivors discovered in sweltering conditions in a semitruck on June 27. Authorities said on June 28 the death toll had risen to 51. Originally, first responders pulled 16 people alive from the rig, including 12 adults and four teenagers. “We pray for the souls of the … people who died in such a cruel, inhuman manner this evening,” Archbishop Gustavo García-Siller said in a statement soon after first responders made the gruesome discovery about 6 p.m. local time. Authorities said the victims were migrants. They said the truck, found on a remote back road in San Antonio, appeared to be part of a smuggling operation. Rubén Minutti, Mexico consul general in San Antonio, said 27 of the people who died are believed to be of Mexican origin based on documents they were carrying, the Associated Press reported. Roberto Velasco Álvarez, head of the Mexican government’s North American mission, said on Twitter on June 28 that in addition to the Mexican nationals, seven victims were originally from Guatemala and two were Honduran. Officials believe the tragedy is the deadliest smuggling incident of its kind in U.S. history. Auxiliary Bishop Mario E. Dorsonville of Washington, D.C., chairman of the U.S. bishop’s Committee on Migration, joined Archbishop García-Siller in mourning the loss of lives.

Missionaries of Charity kicked out of Nicaragua

MEXICO CITY (CNS) – The Missionaries of Charity have been expelled from Nicaragua, the latest in a series of attacks on the Catholic Church and its ministries from the Central American country’s increasingly repressive government. The order of sisters – founded by St. Teresa of Kolkata, known popularly as Mother Teresa – operates a home for abandoned adolescents, a home for the elderly and a nursery for low-income families in Nicaragua. Several Catholic leaders reported and tweeted news of the expulsion on June 28. Nicaraguan media reported the sisters’ exit as part of a crackdown on nongovernmental organizations by the ruling Sandinistas. Auxiliary Bishop Silvio José Baez of Managua, currently based in Miami due to safety concerns, tweeted, “It saddens me that the dictatorship has forced the (sisters) … to abandon the country. Nothing justifies depriving the poor of charitable attention. I’m a witness to the loving service the sisters provide. May God bless them.” Nicaraguan President Daniel Ortega and his allies have increasingly persecuted the Catholic Church and civil society. The president, who won reelection last year in polls considered rigged by opponents and outside observers, is concentrating power; he continues to hold political prisoners and has closed outlets for political expression. 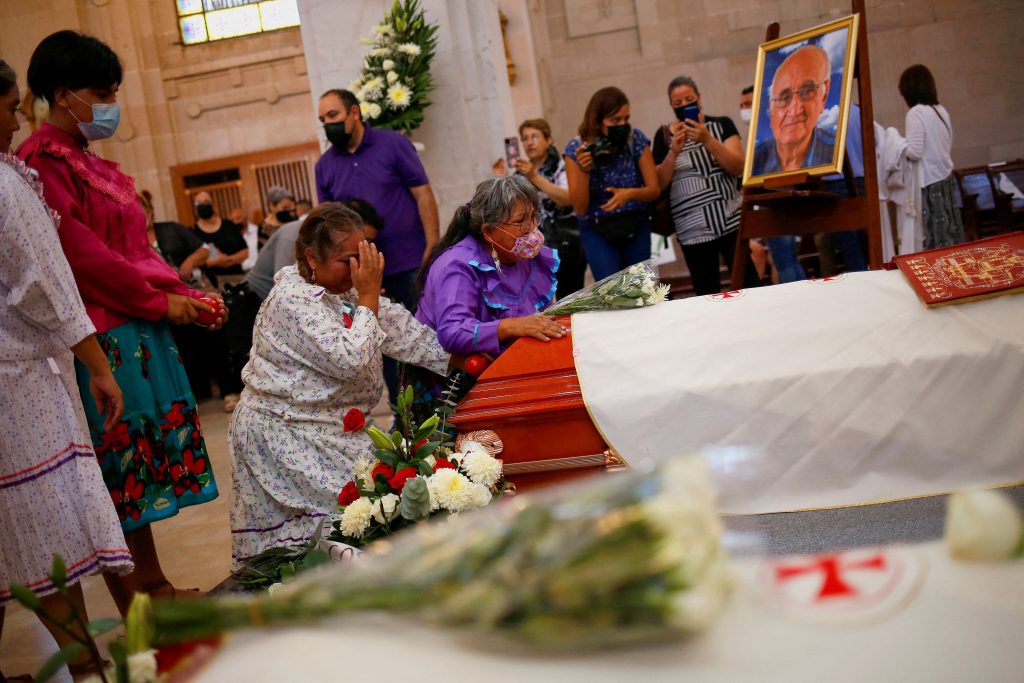