Legatus members are ‘ambassadors’ who bring their faith to the marketplace

INDIANAPOLIS (CNS) — When the Indianapolis chapter of Legatus marked its 30th anniversary, Tom Monaghan, founder of Domino’s Pizza and Ave Maria University in Florida, was on hand to help members celebrate. Monaghan, now 82, established Legatus for Catholic business executives and owners over 30 years ago. The organization describes its members as “ambassadors for Christ in the marketplace,” and the Indianapolis chapter — founded Dec. 8, 1989 — is the fourth-oldest Legatus chapter. “I congratulate you on your 30th anniversary,” he said. “I like the number 30. I built my career on 30-minute deliveries. Indianapolis is one of my favorite chapters, if not my favorite chapter,” Monaghan said, and noted that with nearly 70 active member couples, it also is “one of, if not the, most successful” of Legatus’ 98 existing or forming chapters. The Dec. 12 anniversary event was held during the chapter’s annual Christmas celebration Mass and dinner. The goal of Legatus is “to bring your Catholic faith into your business by your actions and the way you behave and operate your business,” said current chapter president Gary Hoefle, founder of Maxim Services LLC. He and his wife, Katie, are members of St. Luke the Evangelist Parish in Indianapolis.

WASHINGTON (CNS) — CNN reached an undisclosed settlement Jan. 7 with Nick Sandmann, a Kentucky Catholic high school student who sued the cable news outlet for defamation over its coverage of an incident that occurred after last year’s March for Life. Sandmann, a junior last year who was at the center of the viral video controversy, sought $275 million in damages in his lawsuit filed against CNN last March. He has also sued The Washington Post and NBC Universal. A federal judge let part of the suit against The Post continue after the paper filed a motion to dismiss it. Trial dates have not yet been set for these two cases. The amount of the CNN settlement was not made public during a hearing at the federal courthouse in Covington, Kentucky. After the announcement, Sandmann tweeted: “Yes, We settled with CNN,” which gained more than 82,000 likes by the next day and hundreds of comments, primarily of support. Sandmann sued media outlets for what he claimed was biased coverage of what transpired at the Lincoln Memorial Jan. 18, 2019. That day, Sandmann, wearing a “Make America Great Again” hat, smiled just inches away from Nathan Phillips, a Native American leader, as Phillips chanted and beat a drum. The day after that encounter, clips from a video of that encounter went viral almost immediately, which showed students surrounding Phillips while appearing to be mocking him. The clip caused immediate outrage. But by the next day, extended footage of how the situation unfolded revealed that another group had taunted the students and some responded back. The conclusion of a third-party investigation into the situation, released by the Covington Diocese Feb. 13, 2019, found no evidence that the students had issued “offensive or racist statements” that they had been accused of doing.

‘No end in sight to the horror’: Australian bishops respond to fires

CANBERRA, Australia (CNS) — Saying that “there is no end in sight to the horror which confronts us,” Archbishop Mark Coleridge, president of the Australian Catholic Bishops Conference, said the bishops have implemented a national response to months of wildfires. The bishops have set up a national network, connecting people affected by the fires with “people who can help with tasks such as preparing meals, clearing properties, rebuilding communities, as well as pastoral and counseling support.” They are collaborating with other religious agencies and their institutes and will take up a special collection the last weekend in January, when Australia Day is celebrated. Archbishop Coleridge said people who do not want to wait to donate to their parish collections can donate to the Society of St. Vincent de Paul, known in Australia as Vinnies. The bishops’ conference also set up a special page, www.catholic.org.au/bushfires, with a button for donation to the Vinnies, as well as resources such as prayers of intercession, prayers for those affected, and statements on the fire from other organizations. “We have all seen the apocalyptic images, even if we are not in the areas most affected,” the archbishop said. “Lives have been lost, homes and towns have been destroyed, smoke has shrouded large swathes of our country.”

WASHINGTON (CNS) — The president of the U.S. bishops urged the United States and Iran to “embrace peace rather than violence” in the wake of escalating tensions between the two countries. “May the Lord help all parties in this time of growing belligerence to peer through one another’s transgressions and appreciate the legitimate fears that lie behind them,” said the Jan. 8 statement from Archbishop Jose H. Gomez of Los Angeles. He was joined in the statement by Bishop David J. Malloy of Rockford, Illinois, chairman of the bishops’ Committee on International Justice and Peace. Noting that the bishops have addressed Middle East peace issues regularly, “we urge once again that all parties, in these critical days, embrace peace rather than violence. Peace has been all too elusive,” Archbishop Gomez and Bishop Malloy said. “We have called for necessary diplomacy, courageous dialogue and tireless efforts toward peace to resolve such global conflicts,” they added. “We do so now, and we will do so always.” Tensions heightened first with a siege of the U.S. Embassy in Iraq by protesters Dec. 31-Jan. 1, followed by a U.S. drone strike Jan. 3 that killed Iranian Maj. Gen. Qassem Soleimani. The Iranian government retaliated for Soleimani’s killing with missile attacks on Iraqi bases Jan. 7.

MINNEAPOLIS (CNS) — The Catholic and Lutheran bishops of Minnesota, in an open letter, urged support and prayers for those seeking shelter and protection. The open letter was first published Dec. 23 in the Minneapolis Star Tribune — just before the Christmas Day deadline for state and local governments to tell the Trump administration whether they will authorize refugee resettlement in their area. The bishops stressed that everyone is created in the image and likeness of God and imbued with a sacred dignity that must be protected. “This is especially true when it comes to the poor and vulnerable,” they wrote. “We are saddened that as Christians prepare to celebrate the birth of Christ — who himself experienced life as a refugee when his family fled to Egypt — our nation may be creating even more hardships for vulnerable refugee families,” the bishops said. President Donald Trump’s executive order, issued Sept. 26, “seems to unnecessarily politicize what has been a humanitarian program rooted in our nation’s long history of resettling families fleeing from life-threatening dangers,” the bishops wrote. “We are also troubled by the decision to set a limit of 18,000 refugees in 2020, the lowest in 40 years.”

OXFORD, England (CNS) — The French bishops’ permanent council has approved a recommendation to remove gender references for parents on baptismal certificates. Bishop Joseph de Metz-Noblat of Langres, president of the French bishops’ Council for Canonical Questions, said the changes were made to bring baptismal practices into line with new gender-equality laws. In a letter to bishops dated Dec. 13, 2018, and published at the end of 2019, Bishop Metz-Noblat said the “ever-more-complex situation of families in France” had made compiling Catholic documents “sometimes difficult,” especially with baptisms. He added that his council had worked with the two other bishops’ conference commissions to produce a new baptismal formula, referring to “parents or other holders of parental authority.” The reformulation was designed to avoid any moral judgment and help dioceses confronted with problems of vocabulary, the bishop said. He added that the reformulation had now been approved by the bishops’ permanent council. “According to canon law, ministers cannot refuse sacraments to persons who opportunely ask for them, while children cannot be held responsible for the situation of their parents,” Bishop Metz-Noblat said. “This is why we are recommending you adopt this formulation, which seems more suited to our epoch.” 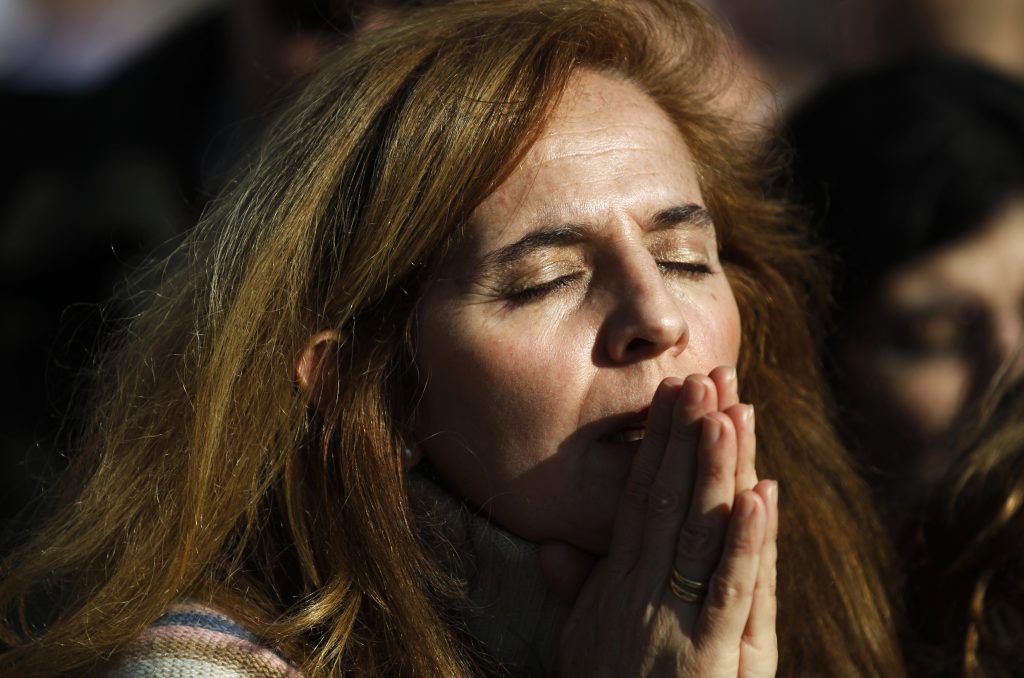 A woman prays during Mass in favor of the traditional family unit in central Madrid in this 2011 file photo. Spanish church leaders voiced concern for their country’s future after the government pledged to legalize euthanasia, secularize education and strip the church of “improper assets.” (CNS photo/Susana Vera, Reuters)