MIAMI (CNS) — A second Florida-to-Bahamas round-trip humanitarian cruise was set to sail the weekend of Sept. 14, weather-permitting, carrying supplies, transport specialty personnel, power generators and volunteers. The previous week, the Grand Bahama cruise ship arrived at its home port in West Palm Beach with some 1,100 Bahamian storm evacuees. That ship was met by workers from Catholic Charities USA, along with members of the United Way, American Red Cross and Discover the Palm Beaches, which acts as a convention and visitors bureau. The ship’s parent company, Bahamas Paradise Cruise Line, said it is canceling four upcoming tourism trips to accommodate one or more additional humanitarian cruises this month, according to a spokeswoman. If the humanitarian mission isn’t postponed because of a pending tropical depression, it is expected to take up to 350 skilled volunteers, large scale generators for several areas in the Bahamas, supplies and 30 to 50 licensed electricians. Bahamas Paradise Cruise Line has raised $542,280 of its $1 million goal to offset the humanitarian transport costs and loss of regular tourism business.

MEXICO CITY (CNS) — Bishops from Central America and southern Mexico called on Catholics to better accompany migrants heading north, at a time when immigration enforcement has increased in Mexico. “As pastors of our people, we bishops are close to our brothers who suffer, and we know the suffering of migrants, the risks and dangers confronted by those leaving the security of home and the coming apart of families, especially when children are separated from their families,” the bishops said. They issued the statement after a Sept. 9-11 meeting of church leaders from Central America and southern Mexico in the Mexican city of Tapachula. The bishops also called for people to “overcome the fear that migration can generate, because it is about treating our brothers well,” and urged people to “work in a coordinated and organized way to create just migration policies.” Their statement came as the Mexican government — bowing to U.S. pressure — steps up immigration enforcement along its southern and northern borders to stem the flow of migrants traveling through the country. In the United States, meanwhile, a Sept. 11 Supreme Court decision allowed the U.S. government to fully implement a policy of denying asylum to anyone who traveled through another country while on their way to the United States without first seeking asylum in that country. The ruling takes effect while the government policy is being appealed in the court system.

Catholic leaders from Tennessee to Texas among Lumen Christi finalists

CHICAGO (CNS) — Catholic Extension announced the 11 finalists for its 2019-20 Lumen Christi Award Sept. 10, saying they include a “cowboy priest” who became “an unlikely national icon at the nation’s southern border” and “a visionary” who is leading a community transformation in the toughest part of his hometown in Louisiana. Also up for the award is a group of “angels” in the Rio Grande Valley of Texas who feed and minister to the poorest of the poor using their own finances “and a desire to want to be better every day.” The finalists also include a retired Army officer who sprang into service after Hurricane Michael hit the Florida panhandle, eventually helping lead response efforts to five distribution sites serving 81,000 individuals over seven weeks. “Each year I am humbled by the remarkable and inspiring work of our Lumen Christi Award finalists,” Father Jack Wall, president of Catholic Extension, said in a statement. The award, which is Latin for “Light of Christ,” is now in its 42nd year and is the highest honor bestowed by the Chicago-based papal society.

VATICAN CITY (CNS) — Pope Francis said giving fragments of St. Peter’s bones to the head of the Church founded by Peter’s brother, St. Andrew, was meant to be a reminder and encouragement of the journey toward Christian unity. In a letter to Ecumenical Patriarch Bartholomew of Constantinople, Pope Francis explained in detail the reasons he sent him a bronze reliquary containing nine bone fragments in late June. The unexpected gift had been presented to Archbishop Job of Telmessos, the patriarch’s representative, at the Vatican June 29, the feast of Sts. Peter and Paul. Addressing the patriarch as “Your holiness, dear brother,” the pope wrote that he wanted to give the bones, believed to be St. Peter’s, to the patriarch and “the beloved church of Constantinople over which you preside with such devotion. This gesture is intended to be a confirmation of the journey that our churches have made in drawing closer to one another: a journey at times demanding and difficult, yet one accompanied by evident signs of God’s grace,” he wrote. The letter, dated Aug. 30, was released by the Vatican Sept. 13. During a moment of prayer and reflection about “our mutual determination to advance together toward full communion,” the pope said he thought about their predecessors’ historic meeting in Jerusalem more than 50 years ago and the gift Patriarch Athenagoras gave to St. Paul VI — an icon depicting the brothers Peter and Andrew “embracing, united in faith and in love of their common Lord.”

VATICAN CITY (CNS) — The Synod of Bishops for the Amazon will help the Catholic Church make its presence felt and voice heard in a region that is dangerously approaching “a point of no return,” said the special secretaries of the synod. “It is a great and continuing challenge for the Catholic Church to make the original Amazonian peoples feel part of it and contribute to it with the light of Christ and the spiritual richness that shines in their cultures,” Cardinal-designate Michael Czerny and Bishop David Martinez De Aguirre Guinea wrote in an article published Sept. 12 in La Civilta Cattolica, the Jesuit journal. Cardinal-designate Czerny, undersecretary of the Migrants and Refugee Section of the Vatican Dicastery for Promoting Integral Human Development, and Bishop Martinez, apostolic vicar of Puerto Maldonado, Peru, said the synod will take place at a time when “both human and natural life are suffering serious and perhaps irreversible destruction.” The synod, scheduled for Oct. 6-27, will focus on “Amazonia: New paths for the church and for an integral ecology.”

VATICAN CITY (CNS) — Pope Francis said the challenges facing humanity and the Earth are so urgent and important that he has invited world leaders, educators and young people to come to the Vatican next spring to launch a global alliance for building a new, more humane future. “Never before has there been such need to unite our efforts in a broad educational alliance, to form mature individuals capable of overcoming division and antagonism, and to restore the fabric of relationships for the sake of a more fraternal humanity,” he said. The pope launched the new initiative, called the Global Compact on Education, for the future of new generations with a video and written message released by the Vatican Sept. 12. A related website, www.educationglobalcompact.org, went live the same day. The pope has invited representatives from the world’s religions, international organizations and humanitarian groups as well as educators, economists, scientists, policymakers, people from the world of art, culture and sports, and young people themselves to the Vatican May 14, 2020. 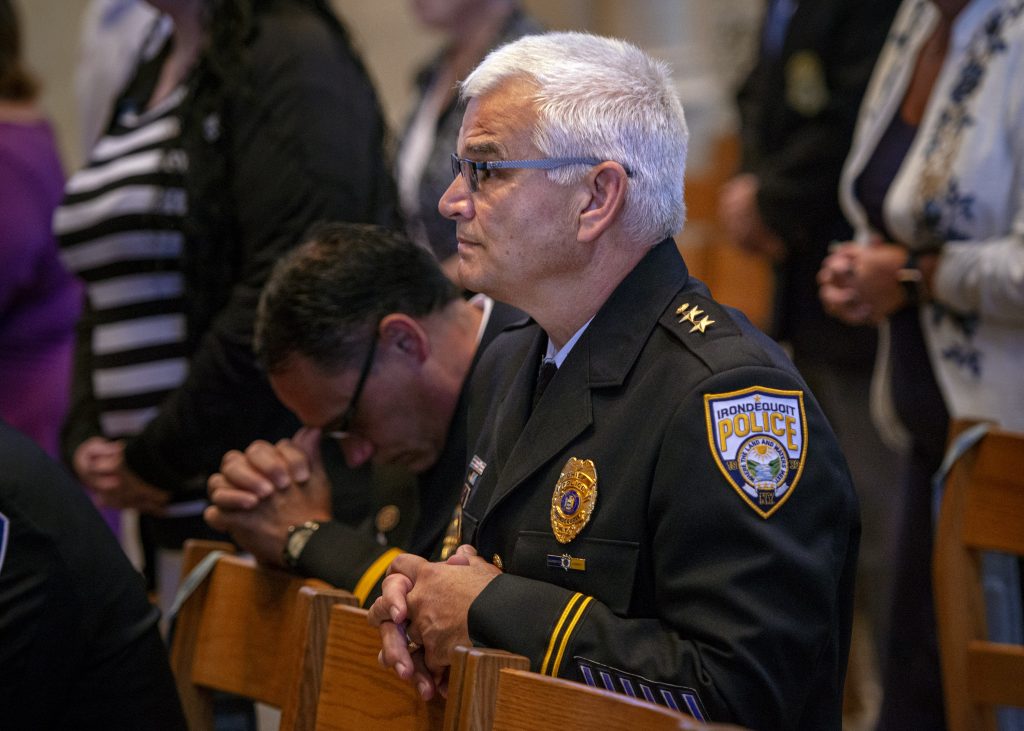 Chief Richard V. Tantalo of the Irondequoit, N.Y., Police Department prays alongside other officers at Sacred Heart Cathedral in Rochester, N.Y., during the annual Blue Mass Sept. 8, 2019. The Mass recognizes the work of all members of law enforcement and honors those who have died while serving in the line of duty. (CNS photo/Jeff Witherow, Catholic Courier)