VATICAN CITY (CNS) – The requirement that most priests in the Latin rite of the Catholic Church be celibate has theological and spiritual foundations and not only practical motivations, said speakers at an international conference on priesthood. Jesus’ chastity, poverty and obedience were not “incidental or simply functional,” but expressed His total union with God and dedication to the salvation of humanity, Jesuit Father Gianfranco Ghirlanda, a well-known canon lawyer, said on Feb. 19 at the Vatican conference. The Church has never claimed that celibacy is “intrinsic” to the priesthood, he said, and, in fact, the Eastern Catholic churches have maintained the discipline of having both celibate and married clergy, and the Latin Church has welcomed married priests coming from other denominations. The status of married Eastern Catholic priests was raised in several of the questions posed to both Father Ghirlanda and Father Emilio Justo, a professor of theology at the Pontifical University of Salamanca, who also spoke on Feb. 19. A married priesthood “is not a second-class priesthood,” Father Ghirlanda said, because married priests also proclaim the Gospel, lead the Christian people and celebrate the sacraments. In his speech, Father Ghirlanda said that in the Code of Canon Law for the Latin Church, celibacy is seen as a gift from God that enables priests “to adhere more easily to Christ with an undivided heart and dedicate themselves more easily to the service of God and His people.”

WASHINGTON, D.C. (CNS) – March 11 is the entry deadline for a religious liberty essay contest for high school juniors and seniors co-sponsored by the U.S. Conference of Catholic Bishops’ Committee for Religious Liberty, the USCCB Secretariat of Catholic Education and Our Sunday Visitor Institute. The first-place essay will be published in Our Sunday Visitor, a national Catholic newsweekly based in Huntington, Indiana, and the author will receive a $2,000 scholarship. Second place will receive a $1,000 scholarship, and third place will receive a $500 scholarship. All three winning essays will be published on the USCCB website, usccb.org. The theme of the essay is “Witnesses to Freedom.” Contest entrants should share the story of a witness to freedom, choosing one person – or group, such as an organization or community – important in the story of freedom. Questions the essay should address include whether there was a key moment in the person’s life that bears witness to freedom – or was it the life as a whole – whether the person articulated important concepts for religious freedom, and if so, the arguments made by that person; why this person is a witness to religious freedom, and what lessons can be learned from this person’s witness. Contest rules can be found at usccb.org/religious-liberty-essay-contest-rules-2022.

CHARLOTTE, N.C. (CNS) – A retired nurse who felt called to help Afghan refugees and the young Afghan mother who embraced her as a mentor were killed after being hit by a truck while out taking a walk on Feb. 15. Enedina “Dina” Fernandez, 75, had just finished giving an English lesson to 23-year-old Nabila Rasoul at Rasoul’s new home in northeast Charlotte. They went out for a walk around 3 p.m. About the same time, a Honda Civic speeding along a busy highway about a block away from the house crashed into a Dodge Ram pickup truck and sent it off the roadway, according to Charlotte-Mecklenburg Police. The impact caused the truck to overturn and jump the curb, careening onto the sidewalk where the two women were walking. Fernandez, a Catholic Charities volunteer, died at the scene. Rasoul, a recent evacuee from Afghanistan, was rushed to a hospital but died from her injuries. No others were seriously injured. A police detective involved with the investigation said the two women “were in the wrong place at the wrong time.” The two women had become close after Rasoul, a mother of three young children, and her husband arrived in Charlotte in October. “We are heartbroken over the loss of Dina and Nabila, who were forming a special bond as Dina taught her English and shared stories about their families,” said Gerard Carter, executive director and CEO of Catholic Charities Diocese of Charlotte.

VATICAN CITY (CNS) – Humanity seems to be a “champion in making war,” which should “make us all ashamed,” Pope Francis said. Meeting leaders of the Eastern Catholic churches – many from countries at war, facing the threat of war or dealing with the destruction left by war – the pope said human beings seem to be “attached to wars, and this is tragic.” Pope Francis made his comments and offered his encouragement and condolences on Feb. 18 during a meeting with members of the Congregation for Eastern Churches, most of which are based in the Middle East, North Africa and Eastern Europe, including Ukraine. “Humanity still seems to be groping in the dark,” the pope said. “We have witnessed the massacres of the conflicts in the Middle East, in Syria and Iraq; those in the Ethiopian region of Tigray; and threatening winds are still blowing in the steppes of Eastern Europe, lighting the fuses and blasts of weapons and leaving the hearts of the poor and the innocent freezing.” At the same time, he said, “the drama of Lebanon continues, leaving many people without bread; young people and adults have lost hope and are leaving those lands.”

MANCHESTER, England (CNS) – Violent suicides increase in countries where assisted suicide and euthanasia are legalized, a new study shows. A 35-page study published in The Journal of Ethics in Mental Health on Feb. 7 said that not a single European country that has legalized doctor-assisted death has seen a subsequent reduction in its rates of violent suicides. The report, “Euthanasia, Assisted Suicide and Suicide Rates in Europe,” found that the introduction of euthanasia and assisted suicide often “is followed by considerable increases in suicide (inclusive of assisted suicide) and in intentional self-initiated death.” The study examined data on physician-assisted suicides and euthanasia and on violent suicides between 1990 and 2016 in the Netherlands, Belgium, Luxembourg and Switzerland – where “assisted dying” has been legal for a comparatively lengthy period – and compared them to trends in non-assisted suicides rates in bordering countries where assisted suicide or euthanasia was not legal. “Furthermore, the data from Europe and from the U.S. indicate that it is women who have most been placed at risk of avoidable premature death,” said the peer-reviewed study carried out by David Jones, director of The Anscombe Centre for Bioethics, an Oxford-based institute serving the Catholic Church in the U.K. and the Irish Republic.

Florida House approves measure to ban most abortions after 15 weeks

WASHINGTON, D.C. (CNS) – In a 78-39 vote, Florida’s House of Representatives on Feb. 17 approved a ban on most abortions after 15 weeks of pregnancy. A companion measure faced a Senate vote the week of Feb. 21 and could be passed by both chambers by the end of the month. Florida Republican Gov. Ron DeSantis has said he supports the legislation and would sign it into law. But the law could face a state court challenge and ultimately end up before the Florida Supreme Court. The Florida Conference of Catholic Bishops, the public policy arm of the state’s bishops, has backed the abortion ban bill and urged Catholics in the state to contact their state representatives and state senators to approve it. Christie Arnold, associate for social concerns and respect life with Florida bishops’ conference, testified before a House subcommittee on Jan. 19 in support of the bill. She said the state’s bishops support its increased “protections for women and children, specifically unborn children. It is encouraging that the bill narrows the window of time in which a woman can obtain an abortion to 15 weeks’ gestation. This is a good step in the right direction to limit the harm of abortion and further protect unborn children,” she said. The Florida measure includes exceptions for the life of the mother and for “fatal fetal anomalies.”

ROME (CNS) – A priest who stood in for a 15-year-old boy who he thought was going to be executed during Spain’s bloody civil war will be among a group of 16 priests, seminarians and laymen who are set to be beatified in Granada, Spain. The Mass and beatification of the martyrs, including Father Jose Becerra, will take place in the Granada cathedral on Feb. 26. Originally scheduled for May 2020, the beatification ceremony was delayed due to the COVID-19 pandemic. Tens of thousands of Catholics were killed by left-wing forces between 1936-1939 during the Spanish Civil War; more than 2,000 of the martyrs already have been beatified and a dozen have been canonized. Born in Alhama de Granada, Father José Becerra Sánchez served as a priest in his native town until he was arrested and imprisoned by anti-clerical militants in 1936. During his imprisonment, the militants also imprisoned Eduardo Raya Mijoler, a 15-year-old boy. The following day, the young boy was escorted from his cell, presumably to be executed. Upon seeing the young man being taken away, the 61-year-old Father Becerra told the guards, “Don’t take that boy, he’s still very young. Take me, I am already an old man.” 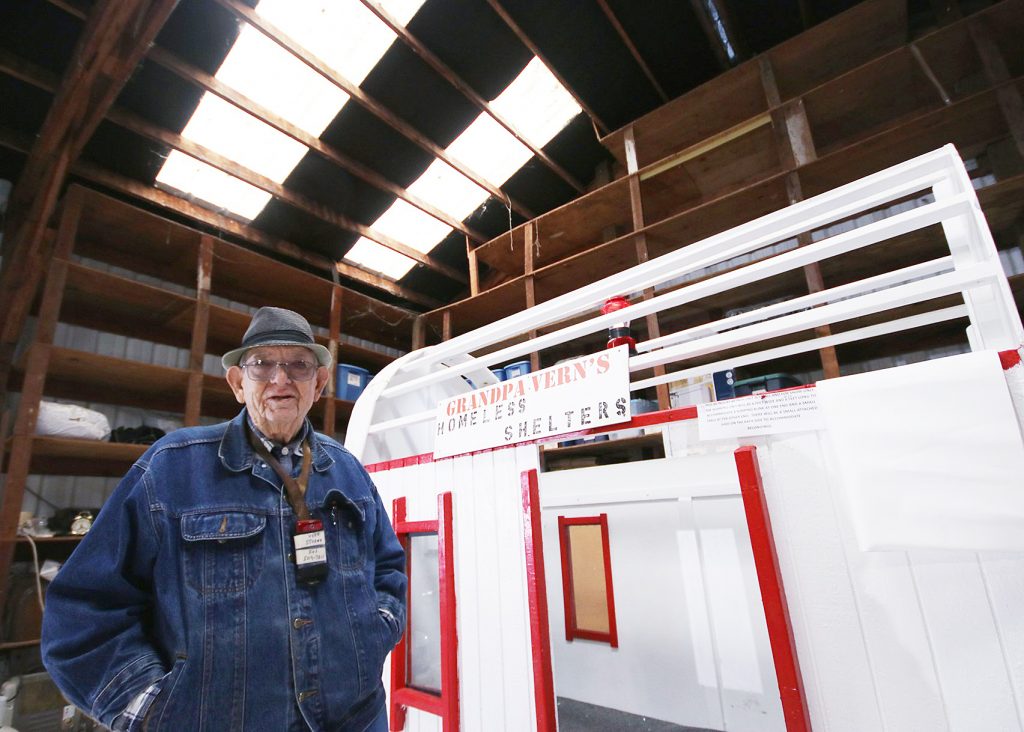 Vern Stuewe, 90, of Corvallis, Ore., poses for a photo Jan. 21, 2022, next to his prototype of a mobile shelter for the homeless. He has spent a year designing the sturdy and inexpensive living quarters. (CNS photo/Ed Langlois, Catholic Sentinel)