VATICAN CITY (CNS) — Recognizing their welcome of and witness to Christ, Pope Francis has approved changing the liturgical feast of St. Martha to include her sister and brother, Mary and Lazarus, on the Church’s universal calendar of feast days. The names of Mary and Lazarus will be added to the July 29 feast on the General Roman Calendar, the universal schedule of holy days and feast days for the Latin rite of the Catholic Church. The Vatican Feb. 2 published the Congregation for Divine Worship and the Sacraments’ decree ordering the change in calendars. Signed by Cardinal Robert Sarah, the congregation’s prefect, the decree said Pope Francis approved the memorial for Martha, Mary and Lazarus after “considering the important evangelical witness they offered in welcoming the Lord Jesus into their home, in listening to him attentively, (and) in believing that he is the resurrection and the life. In the household of Bethany, the Lord Jesus experienced the family spirit and friendship of Martha, Mary and Lazarus, and for this reason the Gospel of John states that he loved them,” it said. “Martha generously offered him hospitality, Mary listened attentively to his words and Lazarus promptly emerged from the tomb at the command of the one who humiliated death.”

WASHINGTON (CNS) — Ash Wednesday, as with many other things right now, will have a different look at many Catholic parishes across the United States this year. For starters, Catholic churches that are often standing-room only on this day — drawing crowds just short of the Easter and Christmas congregations — will be at their pandemic-restricted size limits with members of the congregation spread out in socially distanced seating. Other Catholics will be watching the livestream Mass, as they have been for much of the pandemic, and will of course, not receive ashes. During this year’s celebration of Ash Wednesday Feb. 17, many dioceses will be following the Vatican’s recommendation of a modified method for distributing ashes: sprinkling them on the top of people’s heads rather than using them to make a cross on people’s foreheads. priests should bless the ashes with holy water at the altar and then address the entire congregation with the words in the Roman Missal that are used when marking individual’s foreheads with ashes: Either “Repent and believe in the Gospel” or “Remember that you are dust and to dust you shall return.”

Priest says thousands of refugees in Tigray deported to Eritrea

NAIROBI, Kenya (CNS) — In the midst of the conflict in Ethiopia’s Tigray region, thousands of Eritrean refugees who fled oppression and authoritarianism have been deported back to their home country, said an Eritrean Catholic priest. Father Mussie Zerai, a priest of the Archdiocese of Asmara, Eritrea, who works with migrants, said the refugees were in Schimelba and Hitsats camps, which hosted about 20,000 refugees. He said about 10,000 of them were deported to Eritrea. The refugees are part of the 96,000 who were hosted in four camps in Tigray. The Eritreans had fled political persecution, compulsory military service and war back home. “About 5,000 managed to escape and reach the Mai-Aini refugee camp, which now houses over 20,000; 5,000 people are missing,” Father Zerai told Catholic News Service. “What happened in the refugee camps in Tigray is a cruel violation of the Geneva Convention of 1951,” which relates to the status of a refugee, the priest said. “We know there have been violence and killings.”

VATICAN CITY (CNS) — While protocols to slow the COVID-19 pandemic have silenced many concert halls and restricted the use of congregational singing in many churches, Pope Francis prayed that musicians were using this time to listen. Good music, like any kind of effective communication, needs both sound and silence, the pope said in a video message Feb. 4 to participants in the Pontifical Council for Culture’s international meeting on the Church and music. Recognizing the impact the pandemic has had on musicians around the world, Pope Francis expressed his sympathy to “the musicians who have seen their lives and professions disrupted by the demands of distancing; to those who have lost their jobs and social contact; to those who have had to cope, in difficult contexts, with the necessary training, education and community life.” But he also recognized how many of them, inside the church and out, “have dedicated significant efforts to continue to offer a musical service endowed with new creativity” whether online or at open-air venues. The international conference Feb. 4-5, also held online because of the pandemic, focused on the theme, “Text and Context.”

WASHINGTON (CNS) — Catholics in St. Petersburg, Florida, will need to get their napkins ready because some barbecue from Kansas City, Missouri, is coming their way. A friendly wager between the bishops and two Catholic schools from the dioceses of the competing cities in Super Bowl LV put food on the line for the victory days before the Feb.7 game, which ended with the Tampa Bay Buccaneers beating the Kansas City Chiefs 31-9. Bishop Gregory L. Parkes of St. Petersburg and Bishop James V. Johnston Jr., of Kansas City-St. Joseph came up with their Super Bowl wager on the Feb. 2 episode of “Conversation with Cardinal Dolan” on Sirius XM’s The Catholic Channel, where they were talking about the upcoming matchup with teams from their dioceses. On the show, they spoke about how Catholic schools in their dioceses — St. Elizabeth’s in Kansas City and St. Paul’s in St. Petersburg — were collecting cans of soup for a Souper Bowl food drive for local food pantries also had a game wager with each other. The school from the losing team would send the other school some local food: St Paul’s would send oranges and St. Elizabeth’s would send barbecue depending on the outcome. When the bishops were asked if they had a similar wager, they said they hadn’t yet, but they came up with one while they were on the air. Bishop Parkes said he could send some hand-rolled cigars from Tampa to Bishop Johnston if the Chiefs won. Bishop Johnston reciprocated by saying he would send along some Kansas City barbecue and when he asked the Florida bishop if he liked ribs or brisket, Bishop Parkes said both.

VATICAN CITY (CNS) — The COVID-19 pandemic can either be a catalyst for change for the better or it will weaken a world already burdened by global crises, Pope Francis said. The pandemic not only had a “significant effect” on people’s way of living, it also “shed light on the risks and consequences inherent in a way of life dominated by selfishness and a culture of waste,” the pope said Feb. 8 during his annual meeting with diplomats accredited to the Holy See. The COVID-19 pandemic, he said, “set before us a choice: either to continue on the road we have followed until now, or to set out on a new path.” In a nearly hourlong speech to members of the diplomatic corps, the pope listed a series of crises “that were provoked or brought to light by the pandemic” as a way to reflect on the opportunities the global community has to build “a more humane, just, supportive and peaceful world.” The health crisis sparked by COVID-19, he said, forced the world to confront two “unavoidable dimensions of human existence” — suffering and death — which serve as a reminder of the value of life “from conception in the womb until its natural end.” 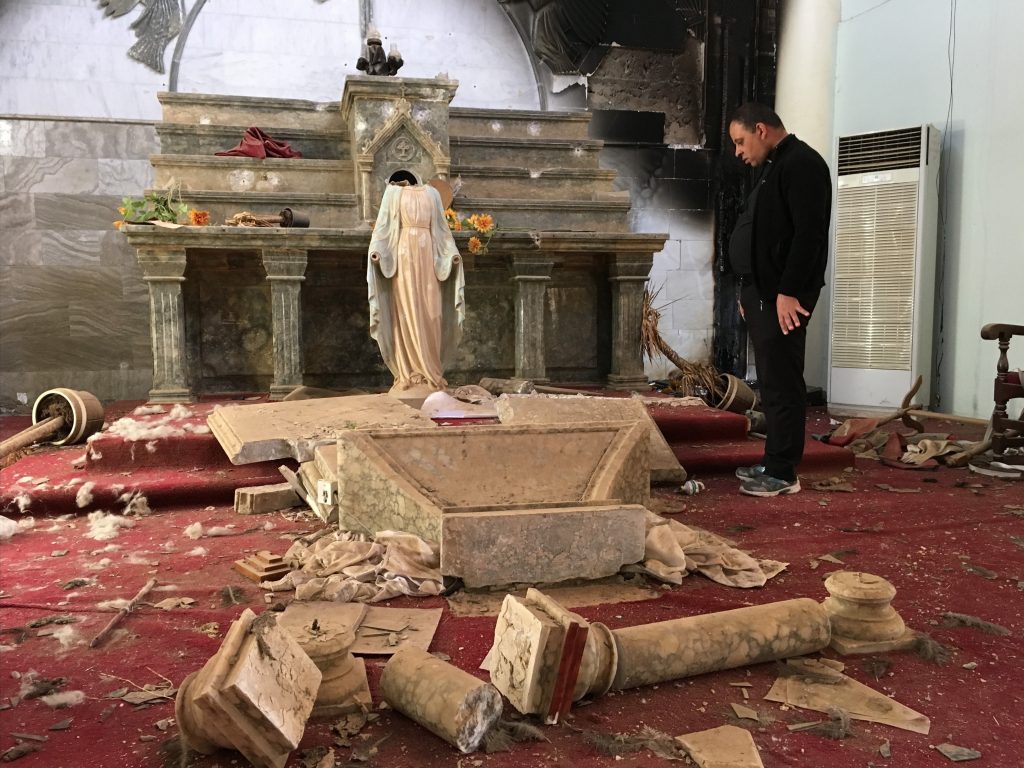 A Catholic church destroyed by Islamic State militants in Karamdes, Iraq, is examined by a priest March 6, 2018. (CNS photo/courtesy Archdiocese of Irbil)