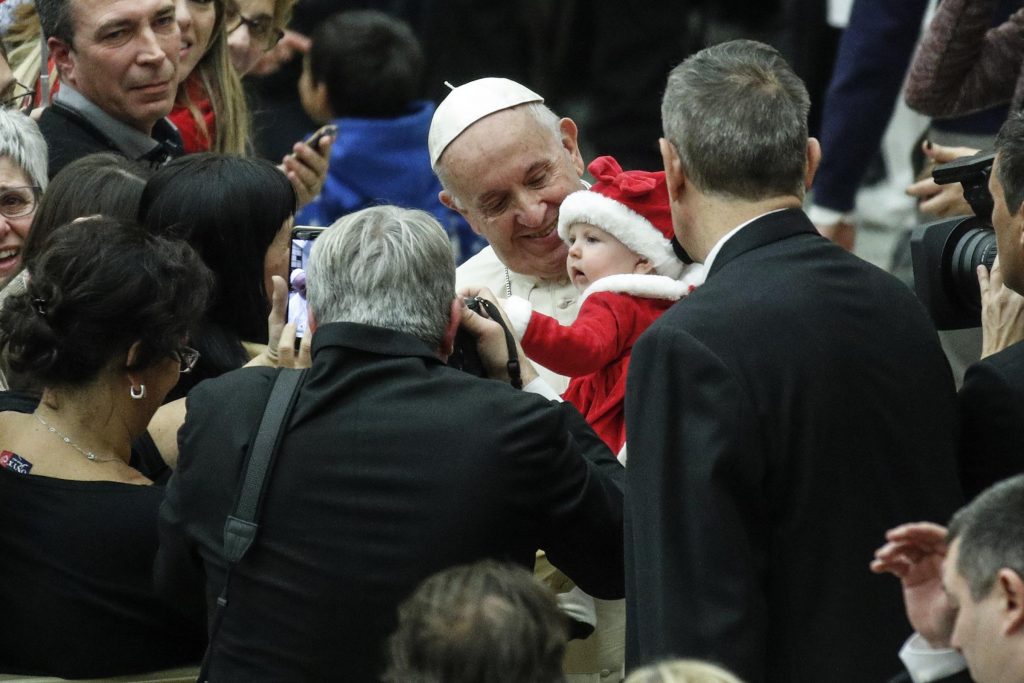 Pope Francis holds a baby on the eve of his 82nd birthday during a Dec. 16 audience with children and families from the Santa Marta Dispensary, a Vatican charity that offers special help to mothers and children in need, at the Vatican. (CNS photo/Giuseppe Lami, EPA)

WASHINGTON (CNS) — What a long, strange trip it’s been. Not walking the 500 miles in a pilgrimage from southern France to Santiago de Compostela, Spain, that Lydia B. Smith first did a decade ago. Not even making a documentary about “the Camino,” as the pilgrimage is called, when she returned a year later with a camera and film crew. It was getting the documentary aired on PBS stations. At long — very long — last, Smith’s hopes are being realized. “Walking the Camino: Six Ways to Santiago” is being shown in December on more than 200 PBS affiliates in 118 cities throughout the United States. Thanks to repeat showings, “Walking the Camino” will air more than 1,000 times before the year is out. Although the earliest airings are set for Dec. 15 on a handful of stations, the biggest splash will be Dec. 18. Now that PBS has joined the multicast universe along with other over-the-air broadcasters, “Walking the Camino” will be seen that date on the PBS subchannel World at 9 p.m. EST, with subsequent airings over the following two weeks at different times of the day, including overnight, early morning, afternoon, prime time and day parts called “early fringe” and “late fringe.”

VATICAN CITY (CNS) — Three members of Pope Francis’ Council of Cardinals have officially ended their service as papal advisers on the reform of the Roman Curia. In September, the council members had asked the pope for a reflection on “the work, structure and composition of the council itself, also taking into account the advanced age of some of its members.” In response to that request, the pope wrote to three cardinal-members at the end of October thanking them for their service, Greg Burke, director of the Vatican press office, told reporters Dec. 12. The cardinals ending their service after five years as members are Australian Cardinal George Pell, 77; Cardinal Francisco Javier Errazuriz Ossa, 85, retired archbishop of Santiago, Chile; and Cardinal Laurent Monsengwo Pasinya of Kinshasa, Congo, 79. The three cardinals have missed a number of the meetings, which are scheduled five times a year in Rome. Cardinal Pell has been on trial in Australia on multiple sex abuse charges and Cardinal Errazuriz was to face questioning by a local prosecutor over his handling of abuse allegations. The Chilean cardinal told Radio Cooperativa in November his departure was not a resignation but was because his term had ended.

Panel: Aim of ‘seamless garment’ to unite Catholics on all life issues

NEW YORK (CNS) — Since Cardinal Joseph L. Bernardin introduced the “seamless garment” approach to life issues 35 years ago, the notion has been both divisive and formative for the Church, according to speakers at a Dec. 11 panel in New York. The event, “A Consistent Ethic of Life 2.0: An American Catholic Dialogue Rebooted,” was held at Jesuit-run Fordham University, the site of Cardinal Bernardin’s 1983 speech. The cardinal was the chair of the U.S. bishops’ pro-life committee when his seminal talk connected poverty, euthanasia, nuclear war, abortion and other life issues into a single “consistent ethic of life at every stage and in every circumstance.” The cardinal’s presentation “ushered in a new way of viewing moral living which emphasized the protection of the unborn, care of the poor, the elderly and the environment as interrelated and intertwined,” said retired Bishop Gerald F. Kicanas of Tucson, Arizona, who currently is apostolic administrator of the Diocese of Las Cruces, New Mexico. “This ‘out of the box’ thinking is just what was needed to move beyond the impasse that had formed within the Church and in society around life issues,” he said. Some ignored the unborn focusing their passion for those on the margins. Others upheld the right to life of the unborn without any consideration for the degradation of human life found in the plight of the poor and even less for the care of creation.”

PORTLAND, Ore. (CNS) — “My brother was murdered by a drive-by shooting at the age of 18 years old,” says a young man from Chicago whose emotion-stained voice plays in a video. “I lost my sense of humanity at that time ‘cause how could a world be so cruel to take someone away who didn’t hate no one,” he continues. “How do you rebuild that?” The three finalists of this year’s Opus Prize, one of the world’s largest faith-based awards for social entrepreneurship, are in their own ways working to rebuild such lost hope and provide opportunities for the most vulnerable — while inspiring the next generation of leaders to do the same. “These organizations, led by unsung heroes, are doing noble and holy work, and the prize is meant to be a catalyst for campus and community conversations and actions,” said Daniel McGinty, who helped oversee a partnership between the Opus Prize Foundation and the University of Portland. Each year a different Catholic university is chosen as a partner to select finalists and host the award ceremony. The University of Portland was founded by the Congregation of Holy Cross. The 2018 first-place $1 million prize was presented in November to Rami Nashashibi, founder and director of Chicago’s Inner-City Muslim Action Network, known as IMAN. The organization operates in a city plagued by gun violence; the young man who lost his brother in a drive-by is one of the countless people aided by the organization.

WASHINGTON (CNS) — Recipients of grants approved by the U.S. bishops’ Subcommittee on Catholic Home Missions range from migrant ministry in the Diocese of Stockton, California, to pastoral support to children and families on remote islands in the Diocese of Samoa-Pago Pago, American Samoa. In a Dec. 12 announcement, the subcommittee said it had approved $9.5 million in grants to assist 79 U.S. mission dioceses and eparchies. Subcommittee grants aid dioceses and eparchies that would otherwise struggle due to difficult geography, impoverished populations and limited resources. Catholic Home Missions funding supports various pastoral programs, including religious education and youth ministry, priestly and religious formation, prison ministries, and lay ministry training. “Many dioceses and eparchies throughout the United States cannot provide basic pastoral services without outside assistance,” said Archbishop Paul D. Etienne of Anchorage, Alaska, who was elected chairman of the U.S. Conference of Catholic Bishops’ Committee on National Collections during the bishops’ fall general assembly in Baltimore Nov. 12-14. “Through the generosity of Catholics to the Catholic Home Missions Appeal, we can help strengthen the Church here at home,” he said in a statement.

Late Trappist monk still has impact on people of all faiths, says priest

LOUISVILLE, Ky. (CNS) — Fifty years after his death, Father Thomas Merton is still helping to draw others nearer to Christ through his writings and the communities they tend to create, said Father Lawrence Morey. Like the late monk, Father Morey is a member of the Cistercians of the Strict Observance, known as Trappists. Father Merton lived and wrote from his order’s Abbey of Gethsemani near Bardstown. He died Dec. 10, 1968, near Bangkok, where he was attending a conference for monks from the Order of Cistercians and the Order of St. Benedict. Father Morey gave the homily during a Mass of remembrance honoring Father Merton Dec. 10 at the Cathedral of the Assumption in downtown Louisville. Archbishop Joseph E. Kurtz of Louisville presided. The priest said the support of a community is essential in finding Christ and most of Father Merton’s writings show how important community was to him. Father Morey shared with his listeners that the burial of a brother monk at the Abbey of Gethsemani is a “community affair.” All the monks take part by singing and praying. Six are chosen as pallbearers with the responsibility of lowering the body into the ground. “We all participate at this point by holding our breath,” he said. “What if one of the brothers slip and loses his grip? But we’ve always managed to get our brother to his final resting place without any major accident.”