VATICAN CITY (CNS) — Celebrating the feast of Our Lady of Guadalupe, Pope Francis said she reminds Catholics of her true essence as a woman, a mother and a “mestiza” or person of mixed race. She revealed herself to St. Juan Diego as a “mestiza” to show “that she is everyone’s mother,” and she speaks to everyone as she spoke to this indigenous saint five centuries ago, with tenderness and motherly love, the pope said in his homily during a Mass in St. Peter’s Basilica Dec. 12. Seminarians and priests from Rome’s Pontifical Latin American College alternated singing their traditional guitar-accompanied songs with the Sistine Chapel choir singing parts of the Mass in Gregorian chant. The pope and concelebrating cardinals and bishops processed into the basilica dressed in white. Among the concelebrants were U.S. bishops from Illinois, Indiana and Wisconsin who were in Rome as part of their Dec. 9-13 “ad limina” visits to report on the status of their dioceses. Pope Francis stood before a replica of St. Juan Diego’s tilma, which bears the image of Mary, who appeared to the saint in 1531. In his homily, which the pope delivered off-the-cuff in Spanish, he reflected on the way Mary appears in the Gospels and in the apparitions to St. Juan Diego. She is first and foremost a woman who has been given many titles — many which contain the title “Our Lady,” which underlines her womanhood, he said.

ROME (CNS) — As part of the celebrations for his 50th anniversary of priesthood, Pope Francis chose to personally present a multi-volume collection of writings by his longtime spiritual director, the late Jesuit Father Miguel Angel Fiorito. In addition to presenting the Spanish-language collection, “Escritos” (“Writings”), at a conference at the Jesuit headquarters Dec. 13, Pope Francis wrote an introduction to it, saying the publication is “a consolation for those of us who, for many years, were nourished by his teachings. These writings will be a great good for the whole church.” But he started the celebrations much earlier in the day, inviting cardinals living in Rome to join him in the chapel of his residence for morning Mass. The Vatican did not release the text of a homily or photographs, but the Vatican newspaper printed the greetings of Cardinal Angelo Sodano, dean of the College of Cardinals. “On this happy occasion of your 50th anniversary of priesthood, in the name of all my brother cardinals, I wish you all the best with the deepest thanks for your generous daily service to the holy church of God,” the cardinal said. At the evening book presentation, Pope Francis said he had suggested having one of Father Fiorito’s “disciples” as the main speaker. The editor of La Civilta Cattolica, which published the books, asked the pope who he had in mind. “’Me,’ I said. And here we are.”

WASHINGTON (CNS) — Thanks to television and radio, Archbishop Fulton J. Sheen touched countless Americans using the most advanced technology available to him. Some years ago, The Catholic University of America in Washington, using the most advanced technology it had available, digitized its archives on Archbishop Sheen, as well as maintaining them on the university campus. Virtually everything the university archives knows it possesses on the host of “The Catholic Hour” and other programs is online, save for the “positio,” or official position paper. The copyrighted, two-volume set on the life and holiness of Archbishop Sheen, which includes his writings, was prepared for review at the Vatican’s Congregation for Saints’ Causes. “They (the positio) are not shared widely while the cause is still proceeding,” said Shane MacDonald, a special collections archivist with Catholic University’s archives office, who added he believes there is no larger online archive of the late archbishop. The university’s archive can be accessed at https://fulton-sheen.catholic.edu/at-cua/archive.html. His sainthood cause was officially opened in 2003. In July, Bishop Daniel R. Jenky of Peoria, Illinois, announced Pope Francis had approved a miracle attributed to the intercession of Archbishop Sheen, which led the way to the announcement he would be beatified Dec. 21. But the Vatican announced in early December that the beatification was being postponed.

NASHVILLE, Tenn. (CNS) — Thanks to the courage of a teenage birth mother and the work of Catholic Charities of Tennessee, St. Henry parishioner Matt Davis received the greatest of all gifts: the gift of life, and a loving adoptive family. In an interview with the Tennessee Register, newspaper of the Diocese of Nashville, Davis reflected on his journey of being raised by an adoptive family and recently reconnecting with his birth mother. “I’m thankful that a family here opened themselves up to having a child that wasn’t theirs by blood,” he said. “I had a happy home, amazing parents and a great life.” When Davis ponders the brave decision his birth mother made, allowing him to have that life, he just wants her to know “you are a superhero for what you did.” Flashback to Naples, Florida, 1971: Cindi Salyer was an outgoing high school student with a long-term boyfriend. When she got pregnant during her junior year, she was scared and confused, and didn’t even tell her mother until she was six months along and showing. Some family members wanted Salyer to abort the baby to avoid the shame that followed teen mothers at that time. “All along I said I’m not going to abort,” Salyer said. It was quickly decided that she would come to Nashville to stay with her sister until she could give birth to her baby and return home to finish her senior year and graduate from high school. With the help of her sister, Salyer researched adoption agencies and decided on Catholic Charities, trusting they would place her baby in a good home.

DAYTON, Ohio (CNS) — Each culture, if not every home, has its own unique rendition of the Nativity. The Christ child may lay on a manger made from materials as diverse as wax, blown glass, yarn, papier-mache and terra cotta. Mary might don the dress of a first-century peasant or Renaissance royalty. The ubiquitous manger scene makes the perfect illustration of enculturation, that is, adapting the principles of faith to a specific cultural setting. The Incarnation, the moment God becomes human, allows the nations to envision Christ as one of their own. “Enculturation is a step further from the Incarnation,” said Marianist Father Johann Roten, a scholar at the University of Dayton and expert on cultural interpretations of the Nativity. “The Incarnation is the son of God becoming human and enculturation will then be, He becomes not only human, but he becomes Afghani or He is Persian or He is German or French,” Father Roten told Catholic News Service. The University of Dayton, which is a Catholic and Marianist institution, has amassed what curators believe is the largest collection of Nativity sets in North America. The archives contain about 3,600 creches from around 100 different countries. 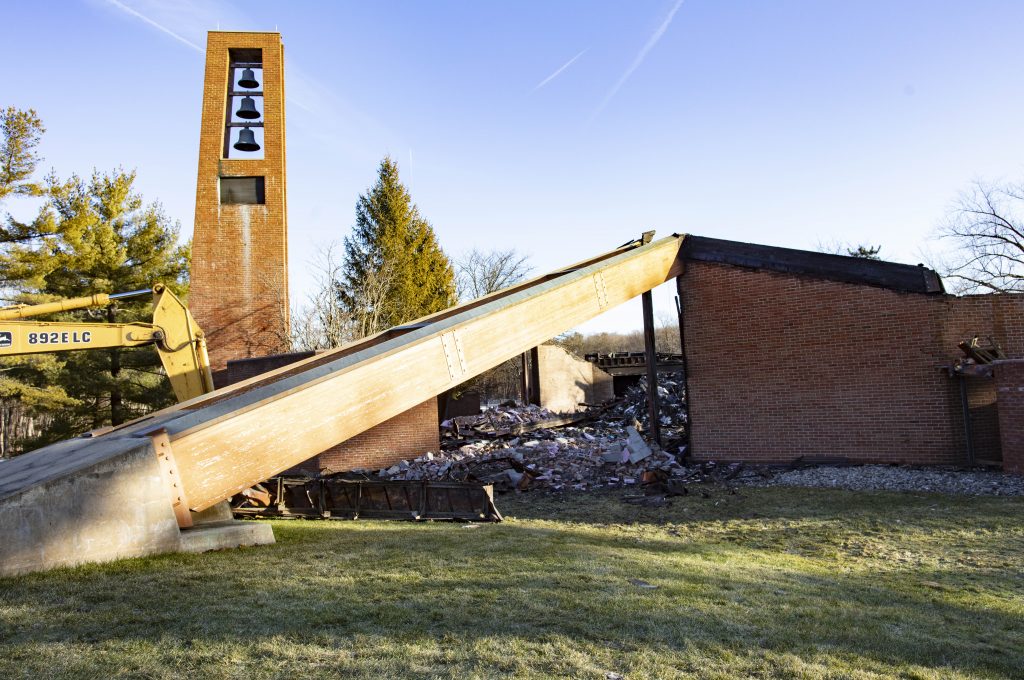 The bell tower of Most Blessed Sacrament Church in Franklin Lakes, N.J., is seen standing Dec. 12, 2019, after a fire destroyed the rest of the church the previous morning. One person suspected of arson is in custody, officials said. The structure was gutted by the flames, and as the news spread through the small town, neighbors, some of whom have been a part of the congregation for decades, flocked to the scene. (CNS photo/Octavio Duran)