CLEVELAND (CNS) — A once-every-two-decade conjunction involving the solar system’s two gas giants will give earthbound observers a look at a so-called “Christmas Star” on the winter solstice. Come sunset Dec. 21 in any time zone around the world, Jupiter and Saturn seemingly will merge into a single bright point of light low in the western sky. The Great Conjunction of 2020 will yield an expected spectacular astronomical sight involving the two planets unseen in nearly eight centuries. The two planets have been approaching conjunction — a point when planets or other bodies as seen from earth are near each other in the night sky — all year. That the conjunction is occurring near Christmas Day has given rise to talk about the Star of Bethlehem that the Gospel of Matthew describes in his telling of the birth of Jesus. But the description of the star “is a very minor part of the infancy narrative,” Jesuit Brother Guy Consolmagno, director of the Vatican Observatory, told Catholic News Service. “It’s so unimportant that Luke doesn’t talk about it and yet it has captured our imagination.” It’s what the star represents — the birth of Jesus — that is the real story, Brother Consolmagno said.

WASHINGTON (CNS) — The chairman of the U.S. bishops’ migration committee Dec. 8 welcomed the court ruling fully restoring the Deferred Action for Childhood Arrivals, or DACA, but said only Congress can “take up and pass legislation granting Dreamers a path to citizenship.” The bishops “are particularly pleased that with this ruling,” handed down late Dec. 4 by Judge Nicholas G. Garaufis of the U.S. District Court in Brooklyn, New York, because “youth who are first-time applicants are allowed to apply for the program for the first time since 2017,” said Auxiliary Washington Auxiliary Bishop Mario E. Dorsonville, chairman of the USCCB’s Committee on Migration. He urged Congress to pass the measure needed to provide “a path to citizenship (that) will give Dreamers and their families true security and the ability to fully thrive.” DACA was suspended this summer by Chad Wolf, acting Homeland Security secretary. In his ruling, Garaufis said in fully restoring DACA, the Trump administration must reopen the program for first-time applicants and reinstate the period of protection for DACA recipients to its initial two-year extension not one year, as Wolf’s memo specified.

DETROIT (CNS) — On a 40-acre plot of land in Howell, in the Diocese of Lansing, Michigan, stands the humble foundation for the establishment of a worldwide network of health care facilities that St. Pio of Pietrelcina set in motion nearly 70 years ago. In 1956, Padre Pio, as he is best known, founded Casa Sollievo della Sofferenza, or Home for the Relief of Suffering, in San Giovanni Rotondo, Italy. The world-renowned Catholic international research hospital serves the poor and destitute, and today houses up to 1,000 patients. Padre Pio once said this was the most important thing he did. His dream was the project would one day expand to other parts of the world. That day has now come. Thanks to the vision, faithfulness and tenacity of several Catholic health care organizations, individuals and the patronage of Lansing Bishop Earl A. Boyea, the Howell project, known as “Casa USA,” seeks to duplicate St. Pio’s hospital complex for the first time outside of Italy, including an exact replica of the great Capuchin Franciscan saint’s original friary church. The idea has been in the hearts and minds of many for decades, but efforts to establish a campus began when Bishop Boyea donated the land.

NEW ORLEANS (CNS) — The sixth annual #iGiveCatholic Giving Day raised nearly $13 million from more than 48,000 donors on #GivingTuesday Dec. 1, “smashing previous records,” according to Cory J. Howat, president of #iGiveCatholic. “We are overwhelmed by the generosity of so many people across this country and throughout the world,” Howat said in a statement Dec. 10. “These gifts will be used to meet the spiritual, physical and educational needs that exist every year but are especially acute during this time of global suffering,” he said. “We are extremely grateful to Our Sunday Visitor, our national sponsor, for their support and belief in what can be accomplished for the Church through #iGiveCatholic.” At a rate of 24.7 gifts per minute, 48,273 donors in all 50 states gave $12,703,973 to benefit 2,600 Catholic parishes, schools and nonprofit ministries through #iGiveCatholic, according to a news release. Donations also came from people in 12 other countries in support of these U.S. Catholic organizations. In 2019, #iGiveCatholic raised $7.4 million from approximately 23,000 donors.

VATICAN CITY (CNS) — Barring any obstacles caused by the global pandemic, Pope Francis is set to begin international travel again in 2021 by visiting Iraq in March, which would make him the first pope to visit this nation. “Pope Francis, accepting the invitation of the Republic of Iraq and of the local Catholic Church,” will visit Iraq March 5-8, said Matteo Bruni, head of the Vatican press office. “He will visit Baghdad, the plain of Ur, linked to the memory of Abraham, the city of Irbil, as well as Mosul and Qaraqosh in the plain of Ninevah,” Bruni wrote Dec. 7. Details about the trip “will be made known in due course and will take into consideration the evolution of the worldwide health emergency,” he added. It would be the pope’s first international trip since his journey to Thailand and Japan in November 2019. From Baghdad, Iraqi Cardinal Louis Raphael Sako, patriarch of Chaldean Catholics, told Catholic News Service that news of the papal visit was a “huge hope.” “We are so thirsty for hope,” he said of the Iraqi people. 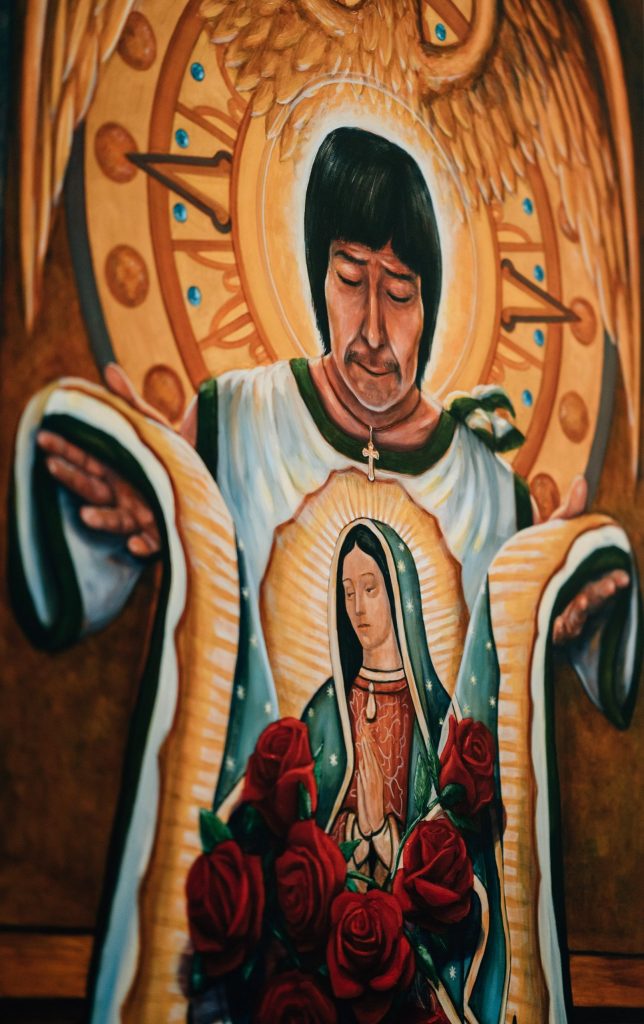 A painting by Rick Ortega in honor of Our Lady of Guadalupe and St. Juan Diego is pictured Nov. 20, 2019, at the Cathedral of Our Lady of the Angels in Los Angeles. Pope Francis has invoked the intercession of St. Juan Diego, the first Indigenous saint of the Americas, as COVID-19 continues to devastate many Latin American countries. (CNS photo/courtesy Archdiocese of Los Angeles)