Immaculate Conception is feast of hope for sinners, pope says

VATICAN CITY (CNS) — Mary, conceived without sin, is a “masterpiece” who reflects “the beauty of God who is all love, grace and self-giving,” Pope Francis said on the feast of the Immaculate Conception. Reciting the Angelus prayer with visitors in St. Peter’s Square Dec. 8, Pope Francis focused on the feast day that celebrates how Mary was conceived in the womb of St. Ann without original sin. Several hours after the noon prayer, the pope joined thousands of people near the Spanish Steps in central Rome to pay homage to the Immaculate Conception at a Marian statue atop a tall column. The statue was erected in 1857 to commemorate Pope Pius IX’s declaration three years earlier of the dogma that Mary was conceived without sin. Early in the morning each Dec. 8, Rome firefighters using a truck and tall ladder, hang a ring of flowers from the statue’s outstretched arm. Throughout the day, individuals and organizations leave flowers at the base of the statue. As is his custom, Pope Francis did not read a speech by the statue but recited a prayer he wrote for the occasion.

VATICAN CITY (CNS) — Despite growing recognition of climate change as a legitimate and looming threat, current commitments to mitigate its effects and alter human behavior fall short of those needed to resolve the crisis in time, Pope Francis said. “We must admit that this awareness is still rather weak, unable to respond adequately to that strong sense of urgency for rapid action called for by the scientific data at our disposal,” the pope said in a message to the U.N. Climate Change Conference, COP25. The conference was being held in Madrid Dec. 2-13, and the Vatican released a copy of the pope’s message Dec. 4. The conference aimed to take crucial steps in the U.N. climate change process and to identify effective strategies for implementing the Paris Agreement, a framework of action against climate change adopted by the U.N. Dec. 12, 2015. However, studies by the Intergovernmental Panel on Climate Change “demonstrate how far words are from concrete actions,” the pope said.

CUERNAVACA, Mexico (CNS) — The Diocese of Cuernavaca has suspended evening Masses due to insecurity in the city and surrounding state of Morelos, a reflection of the violence raging in parts of Mexico and its impact on the Catholic Church. Bishop Ramon Castro Castro of Cuernavaca said church services would not be celebrated after dark because people in the region just south of Mexico City did not want to venture out of their homes after dark. “These are situations where people are scared. It’s a fear that paralyzes them,” Bishop Castro told local media Dec. 4, according to the newspaper El Universal. “There are many people I know who have nothing to do with organized crime, but find themselves affected by this violence and have changed their lifestyle,” he said, adding church attendance is the southern and eastern parts of Morelos — a small state that borders the national capital — has dropped due to insecurity. The bishop also said he had registered four cases of extortion committed against women religious in the diocese. Mexico has had high rates of violence and homicide over the past 13 years as the country launched a crackdown on drug cartels and organized crime.

PENSACOLA, Fla. (CNS) — Reacting to “the horrific mass shooting” that took place early Dec. 6 at Naval Air Station Pensacola, Bishop William A. Wack of Pensacola-Tallahassee said the “tragedy in our diocese is truly heartbreaking.” Three people were shot dead and many others were injured in the shooting and the suspected gunman was a trainee with the Saudi Air Force, according to Florida Gov. Ron DeSantis. At a news conference, law enforcement officials said eight people were taken to local hospitals; one of those injured died. Two officers who responded to the shooting were among those injured. The gunman died in the shooting, said Escambia County Sheriff David Morgan, adding that a county officer “negated the threat” after responding to the scene. The motive for the shooting was still unknown. “Our sympathy and prayers go out to those whose lives were taken, as well as for their families, military service members and first responders, and those who were injured,” Bishop Wack said in a statement, adding: “We ask for God’s peace and mercy on our community. Please join me in prayer during this time of mourning.”

VATICAN CITY (CNS) — Pope Francis and his international Council of Cardinals reviewed aspects of the draft of the apostolic constitution that would govern the Roman Curia, including a greater role for lay men and women. The Vatican press office issued a statement Dec. 4 saying the council also discussed the relationship between the Curia — the Church’s central administrative offices — and the bishops’ conferences around the world. “The activity of the council was aimed at deepening two aspects of importance pertaining to the draft of the new apostolic constitution,” the Vatican said. It included, “the relations between the Curia and the episcopal conferences and the presence of the lay faithful, men and women, in decision-making roles in the offices of the Curia and in other bodies of the Church, and to study the theological-pastoral basis of these aspects.” The council members met Dec. 2-4, and Pope Francis was present except when he had a scheduling conflict.

GRAND RAPIDS, Mich. (CNS) — The Diocese of Grand Rapids said it supports the decision by one of its pastors to request a Michigan judge not to present herself for Communion at Mass because she is in same-sex marriage. Judge Sara Smolenski, the chief judge of Michigan’s 63rd District Court, told local CNN affiliate WOOD-TV 8 that she received a call Nov. 23 from Father Scott Nolan, pastor of St. Stephen Parish in Grand Rapids, in late November and asked her not to go to Communion. Smolenski, 62, and her partner of over 30 years, Linda Burpee, married in March 2016, about a year after the U.S. Supreme Court ruled the U.S. Constitution provides same-sex couples the same right to marry as heterosexual couples. The marriage was publicized not by the couple’s choice but because Smolenski is a public official. In the Dec. 1 TV interview, the judge said Father Nolan told her he was glad to see her in church the previous Sunday but added: “Because you and Linda are married in the state of Michigan, I’d like you to respect the Church and not come to Communion.” In its statement, the diocese said: “We appreciate Judge Sara Smolenski’s service to the community. We are grateful for her past generosity. These facts are not at issue in this matter.” Smolenski has donated to what has been her parish for all of her 62 years; in June 2017 she gave $7,000 for the renovation of St. Stephen. 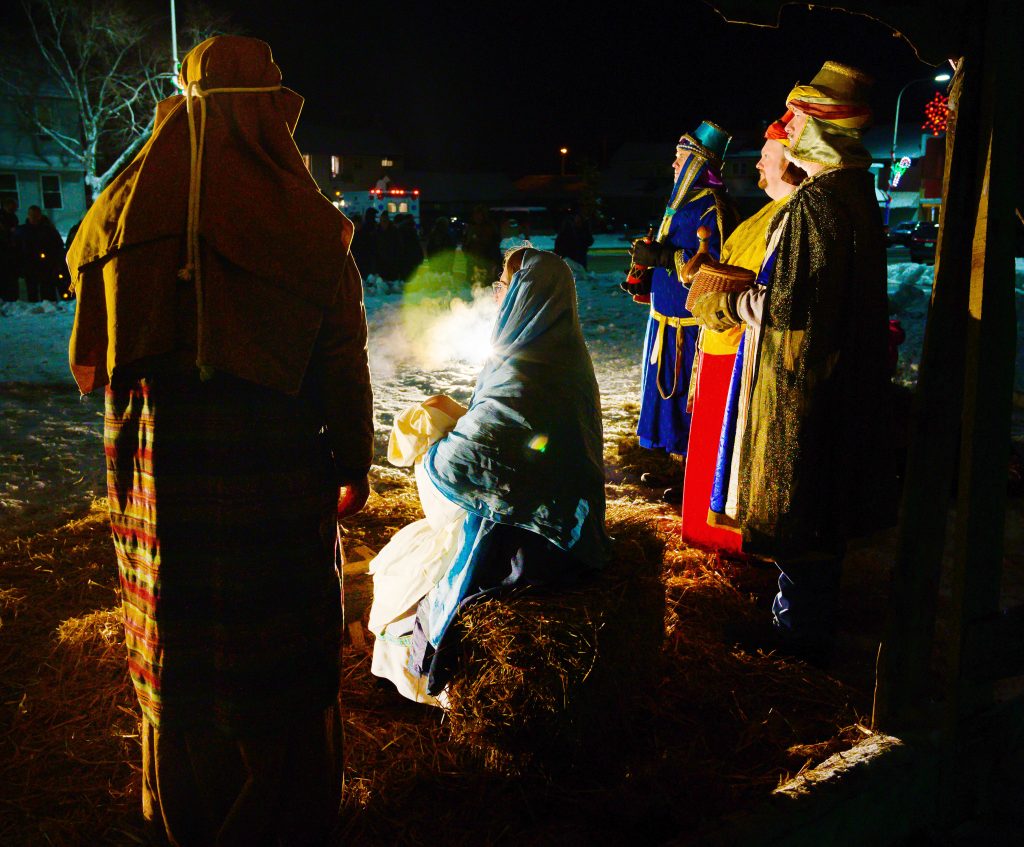 The breath of Mary, who was depicted by Dr. Alexa Gavaga, is captured in the cold night air during a live Nativity scene in Oconto Falls, Wis., Dec. 5, 2019. Employees of HSHS St. Clare Memorial Hospital in Oconto Falls presented the live Nativity scene as part of the community’s holiday celebration. Seven members of the Catholic hospital staff dressed as Mary, Joseph, the Three Wise Men, a shepherd and an angel for two hours in the subfreezing night. The live Nativity also included two sheep and two donkeys. (CNS photo/Sam Lucero, The Compass)