BANGKOK (CNS) — Missionaries are not mercenaries, but beggars who recognize that some brothers and sisters are missing from the community and long to hear the good news of salvation, Pope Francis told the Catholics of Thailand. Celebrating Mass Nov. 21, the feast of the Presentation of the Blessed Virgin Mary, in Bangkok’s National Stadium, Pope Francis looked at the meaning of what he calls “missionary discipleship.” Pope Francis’ visit was part of the celebrations of the 350th anniversary of the establishment of the Apostolic Vicariate of Siam Mission, the first Catholic jurisdiction in what was to become Thailand. In his homily, the pope said the early missionaries realized “they were part of a family much larger than any based on blood lines, cultures, regions or ethnic groups,” and, empowered by the Holy Spirit, “they set out in search of family members they did not yet know.” The missionaries didn’t see the Thai people as pagans or nonbelievers, but as brothers and sisters, the pope said. And they did not just want to share the Gospel with the Thai people, but wanted “to receive what they needed to grow in their own faith and understanding of the Scriptures.” “A missionary disciple is not a mercenary of the faith or a producer of proselytes, but rather a humble mendicant who feels the absence of brothers, sisters and mothers with whom to share the irrevocable gift of reconciliation that Jesus grants to all,” the pope said.

VATICAN CITY (CNS) — The Vatican reiterated its call for a two-state solution in the Holy Land after U.S. Secretary of State Mike Pompeo announced the United States would no longer recognize the illegality of Israeli settlements in the West Bank. In a statement released Nov. 20, the Vatican said that in the “context of recent decisions that risk undermining further the Israeli-Palestinian peace process and the already fragile regional stability, the Holy See reiterates its position of a two-state solution for two peoples as the only way to reach a complete solution to this age-old conflict.” The Vatican also reiterated that it supports Israel’s right “to live in peace and security within the borders recognized by the international community.” However, it also “supports the same right that belongs to the Palestinian people, which must be recognized, respected and implemented. The Holy See wishes that the two parties, negotiating directly with each other, with the support of the international community and in compliance with United Nations resolutions, may find a fair compromise which takes into account the legitimate aspirations of the two peoples,” the statement said. The Assembly of the Catholic Ordinaries of the Holy Land support the statement issued by the Vatican, a spokesman for the assembly told Catholic News Service.

MEXICO CITY (CNS) — The Guatemalan bishops’ migrant ministry has rejected talk of the U.S. and Guatemalan governments sending asylum-seekers to a remote and rugged jungle region rife with drug cartel activities. The bishops said conditions there are not secure for Guatemalan citizens, much less migrants. In a Nov. 18 statement, the migrant ministry raised alarm with a proposal to send planeloads of asylum-seekers from the United States to an airport in Peten department, near the border with Belize and far from the capital of what is considered a highly centralized country with a long history of ignoring its hinterlands. Asylum-seekers would arrive in Peten as part of a “safe third country” agreement. Such an agreement would force migrants traveling through Guatemala, who wish to apply for asylum, to do so in the impoverished country rather than the United States. The U.S. government has forged similar agreements with Honduras and El Salvador with the goal of creating a bottleneck for U.S.-bound migrants in Central America — or, as the migrant ministry posited, “a strategy to push the United States border further south and deny access to its territory and the humanitarian asylum process. It’s undeniable, the interest, the pressure and threats of the United States president so that countries in the region turn into safe third countries. We remind people that we are the most violent region which is not at war,” the bishops’ statement continued. “Peten does not have the ability nor the infrastructure at this time to welcome, protect and integrate asylum-seekers and refugees,” it added.

NEW HAVEN, Conn. (CNS) — The date was Nov. 22, 1963. That day, the seemingly peaceful world of 1950s America was torn apart. President John F. Kennedy — the first Catholic to be elected commander in chief — had been assassinated. Grief was immediate among Catholics, including the Knights of Columbus. Knights were “overwhelmed with grief,” noted then-Supreme Knight Luke E. Hart, after the death of their “most distinguished” member. Kennedy had been a member of the Knights’ Columbus Bunker Hill Council 62 in Charlestown, Massachusetts, joining on St. Patrick’s Day in 1946. He became a fourth-degree Knight in 1954. In a letter to their Supreme Convention in July 1961, Kennedy praised the Knights’ charity and service, writing that their “countless allied activities all unselfishly offered in the name of our common humanity have served to strengthen and solidify their hold on the public heart.” But this man — who, according to Hart, “our country has never known his equal” — was now dead. Hart attended the funeral. In fact, he was the only layman seated in the sanctuary at the funeral Mass at St. Matthew’s Cathedral in Washington.

Minnesota high school preps for beatification of one of its own

ST. PAUL, Minn. (CNS) — A man who scrubbed toilets and shoveled sidewalks at Cretin-Derham Hall High School is on his way to becoming a saint, and the school is celebrating his beatification by elevating his presence on campus and connecting students to his legacy. Christian Brother James Miller taught at then-Cretin High School in St. Paul from 1966 to 1971 and again from 1979 to 1980, teaching Spanish, founding the soccer team and serving as maintenance supervisor. Brother Miller was martyred in 1982 — at age 37 — during the Guatemalan Civil War. Three hooded men found him on a ladder repairing a wall and shot him. Many assume he was killed because he fought to keep his students from being forced into the military. Pope Francis officially recognized Brother James as a martyr last year, clearing the way for beatification. He will be beatified on Dec. 7 in Guatemala, a ceremony that four members of Cretin-Derham Hall will attend, including President Frank Miley. Reminders of the late teacher pop up throughout the school. The chapel is being renamed in honor of “Blessed Brother James”; staff is working with the archdiocese to make the rededication official. The school commissioned a bronze statue of him that was recently installed in the courtyard, which is also being renamed after him.

WASHINGTON (CNS) — A federal judge Nov. 20 temporarily blocked the executions of four federal death-row inmates scheduled for December and January, saying the lethal injections they were to receive goes against the Federal Death Penalty Act. When U.S. Attorney General William Barr announced in July that the government was reinstating the federal death penalty after a 16-year hiatus, he said the executions would use a single drug instead of a three-drug protocol used in recent federal executions and used by several states. Several of the inmates have challenged the use of the single lethal injection. In her ruling, U.S. District Court Judge Tanya Chutkan of the District of Columbia said that since the inmates were likely to win their case, their executions should be blocked until their legal challenge is resolved. The 1994 Federal Death Penalty Act says federal executions should be carried out “in the manner prescribed by the law of the state in which the sentence is imposed.” Shawn Nolan, an attorney for the inmates facing execution, praised the judge’s decision, saying it “prevents the government from evading accountability and making an end-run around the courts by attempting to execute prisoners under a protocol that has never been authorized by Congress.” 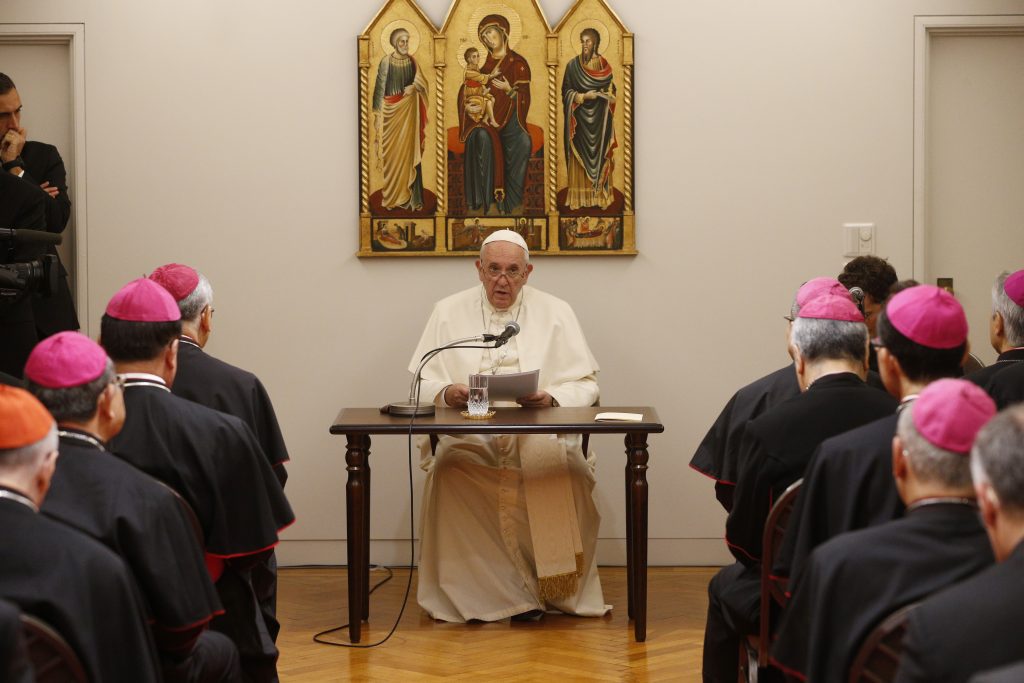 Pope Francis meets with the bishops of Japan at the apostolic nunciature in Tokyo Nov. 23, 2019. (CNS photo/Paul Haring)