Wimbledon champ carried gift from confirmation sponsor to each match

RALEIGH, N.C (CNS) — Abbey Forbes, the 18-year-old winner of the junior girls doubles championship at Wimbledon, has kept an inspirational book in her tennis bag at recent competitions and for all seven Wimbledon matches. The book, from her confirmation sponsor, Joan Monti, is a daily devotional called “Jesus Calling.” The best-seller was well-known to Monti and her friends. But it was completely new to Forbes, who was baptized Catholic as a baby and was just confirmed and received her first Communion April 20 at St. Francis of Assisi Church in Raleigh. “I decided that I was going to keep that book in my tennis bag,” Forbes said. “Every match. Every practice. I open it and I read the daily reading or confession. And I pray on it. It just keeps me connected to my faith while I am playing sports,” she told NC Catholics, magazine of the Diocese of Raleigh. The book was with her at the French Open in late May and in July at Wimbledon. “I was so nervous … excited. I really wanted to win,” Forbes said about her feelings just before the final Wimbledon match with partner Savannah Broadus. “I was asking God for strength and grace and all of those things to be brought with me out onto the court … and I asked him to be with me. That book is just my reminder.”

GARDEN GROVE, Calif. (CNS) — Tim Strader believes Christ Cathedral of the Diocese of Orange “will become the most important Catholic cathedral in the United States, other than St. Patrick’s” in New York. Strader, with his wife, Susan, led the fundraising campaign to finance the sanctuary of the cathedral. They were among some 800 diocesan leaders and donors gathered some days ahead of the cathedral’s July 17 dedication Mass to celebrate the results of years of planning, generous philanthropy and hard work as the transformation of Christ Cathedral unfolded. The structure was once called the Crystal Cathedral and was the centerpiece of the ministries of the late Rev. Robert Schuller. The Orange diocese bought the cathedral about nine years ago for $57.5 million and undertook a multimillion dollar renovation of it and its related buildings, all situated in a campuslike setting. “We have 35 acres, and we have the notoriety from the Schuller years — he had an international following — and we have so many people who come here now,” Tim Strader remarked. Christ Cathedral currently serves more than 11,000 Mass attendees every weekend. “And we’re ecumenical,” Strader continued. “We welcome all faiths. So tonight we can finally see that our new cathedral has become a reality.”

LOUISVILLE, Ky. (CNS) — Mara Whitford, an expectant mother, held a handwritten sign that said, “I’d walk 1,000s of miles for my baby, too” as she stood outside the Cathedral of the Assumption in downtown Louisville. Whitford, a parishioner of St. William Church, was one of about 250 people who attended a candlelight vigil at the cathedral to protest the treatment of migrants and asylum-seekers at the southern U.S. border. Appalled at news reports saying there are squalid condition of some immigrant detention centers, Whitford said it’s distressing to see accounts of children — including infants and toddlers — taken from their mother’s arms. “The idea of anyone doing that to my baby —,” she said as she choked back sobs unable to finish her sentence. “This demonstration shows how many are against the detention camps.” The July 12 event — “Lights for Liberty: A Vigil to End Human Detention Camps” — was hosted by Catholic Charities of Louisville and was one of hundreds of such vigils across the country and around the world. The vigil featured several speakers, including local faith leaders, Catholic Charities staff and a Holocaust survivor. It concluded with a moment of silent prayer by candelight.

WASHINGTON (CNS) — A sea of both experienced Catholic liberal teachers and neophytes eager to learn about the educational philosophy gathered at The Catholic University of America in Washington July 22-25. The bones of a modern movement to restore traditional Catholic liberal education, these culture fighters hope to change society through education. Elisabeth Sullivan, executive director of the Institute for Catholic Liberal Education, began the institute’s four-day conference by introducing the fundamental ideas behind a Catholic liberal education, and the modern obstacles seen as derailing 2,500 years of educational tradition. “This renewal of authentic Catholic education it is fully ordered toward eternal happiness, toward the child’s future,” Sullivan said July 22. “It restores the meaning and purpose that has been stripped from modern education. It is the formation of the whole person.” Sullivan explained a liberally educated person is free not to do whatever he wants, but free from ignorance. With an education that develops critical thinking and encourages wonder, a person can govern himself with wisdom and virtue. “It is fundamentally to be fully human,” Sullivan said.

WASHINGTON (CNS) — Archbishop Joseph E. Kurtz of Louisville, Kentucky, has resigned as chairman of the U.S. bishops’ Committee for Religious Liberty as he undergoes extended treatment for bladder and prostate cancer. Bishop Robert J. McManus of Worcester, Massachusetts, was appointed July 23 to serve as acting chairman of the committee by Cardinal Daniel N. DiNardo of Galveston-Houston, president of the U.S. Conference of Catholic Bishops. The appointment will continue until the bishops’ fall general assembly in November when a permanent chairman will be elected. “We are praying for Archbishop Kurtz, especially as he undergoes an intense treatment plan at Duke Cancer Institute over these next weeks and months,” Cardinal DiNardo said in a statement. The committee is among the most recently organized by the USCCB and has assumed a high profile with its emphasis on promoting religious freedom globally and in the U.S. The bishops first established it as an Ad Hoc Committee for Religious Liberty in 2011 to address growing concerns over the erosion of freedom of religion in America.

Curriculum adapts some aspects of theology of body for younger grades

WASHINGTON (CNS) — The theology of the body is not just suited to high school classrooms. Even 4-year-olds should have the opportunity to learn about St. John Paul II’s teaching on life, love and human sexuality — at least in part. Molly Meyer, a curriculum design specialist, gave a presentation July 24 on Ruah Woods Press’ proprietary K-12 supplementary curriculum on the pope’s teaching during the Institute for Catholic Liberal Education’s four-day conference at The Catholic University of America in Washington. The K-5 section of the curriculum teaches not about the sexual themes associated with the theology of the body, but the Catholic anthropology that must precede any understanding of human sexuality that students learn later. “Rooted: The Theology of the Body” is the first curriculum in the world that begins to teach this theology to kindergartners. Completed last year, the K-5 material will debut in the classroom for the first time this school year. Sean Cruess, principal at St. Benedict Catholic School in Richmond, Virginia, said that he was interested in starting to teach theology of the body earlier at his school. “I think it’s neat because it starts at such a basic level and such a young age,” Cruess said. “Right now we start it in middle school, and I think that at that age, kids are more likely to see theology of the body as a chastity program, whereas if you start it in the elementary grades they see it for what it is, which is just a theology of the human person, a theology of human love.”

BALTIMORE (CNS) — The joint conference of the national organizations for black Catholic clergy, women religious, seminarians and deacons finally made its first stop in Baltimore, a city noted for several firsts on the road to equality in the faith. The annual conference brings together members of the National Black Catholic Clergy Caucus, the National Black Sisters’ Conference, the National Black Catholic Seminarians Association and the National Association of Black Catholic Deacons. The NBCCC was founded in 1968, followed in turn by the other groups. They began meeting jointly because of their commonalities. One of this year’s attendees, Sister Beulah Martin, a Sister of the Blessed Sacrament, didn’t wait for the formal opening of the July 20-24 gathering to soak up some of that Baltimore history. Sister Beulah was among the more than 100 priests, deacons, seminarians and religious women from around the nation at a July 22 Mass at Historic St. Francis Xavier, the first black Catholic church in the United States. It was her 10th day in town, as Sister Beulah had spent her annual retreat at the motherhouse of the Oblate Sisters of Providence, who in 1829 were founded by Mother Mary Lange, a candidate for sainthood, as the first community for sisters of African descent in the U.S. 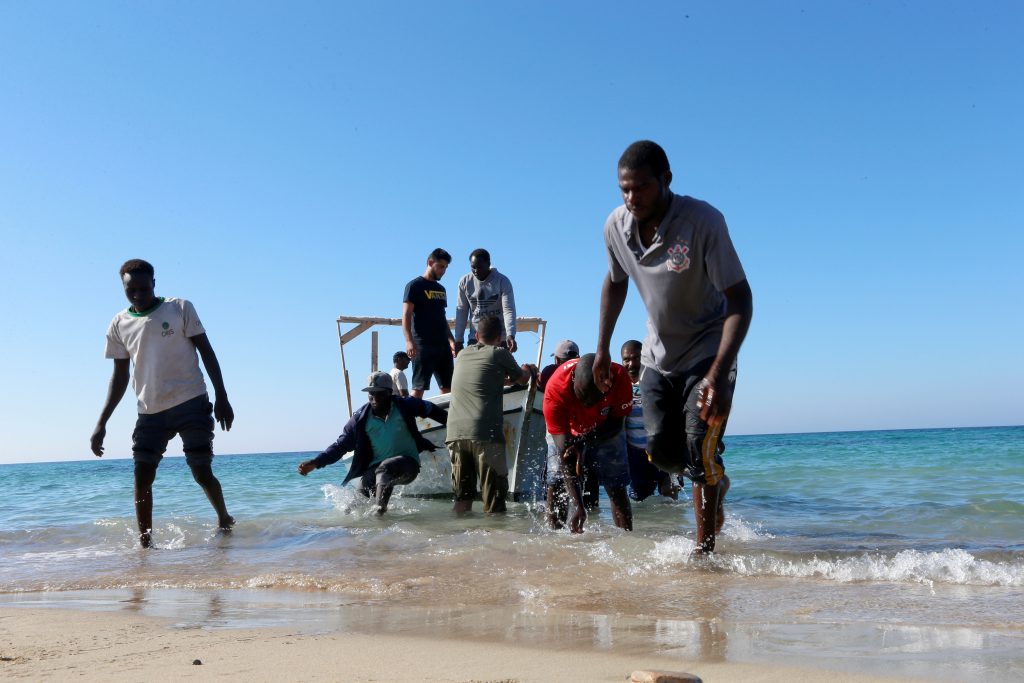 Migrants are seen after being rescued by the Libyan coast guard, in Tripoli, Libya, July 26, 2019. At least 115 migrants were believed dead after their wooden boat headed for Europe capsized near the north African coast of Libya July 25. Pope Francis in his Angelus message July 28 appealed for the international community to “act quickly” to prevent future tragedies. (CNS photo/Ismail Zitouny, Reuters)