CHICAGO (CNS) — Cardinal Blase J. Cupich of Chicago offered prayers for slain police officer Ella French and her family and friends “as they cope with the terrible reality that their loved one was taken from them in another act of senseless violence.” In an Aug. 11 statement, he also offered prayers for her critically wounded partner and his family. The partner’s name was not released but news reports said the 39-year-old officer, who is married and has a young son, remained hospitalized as he continued to fight for his life. He was shot in his right eye and brain the night of Aug. 7 in the gunfire that took French’s life in Chicago’s West Englewood neighborhood. “We can only imagine their pain, as we hold them in prayer and stand with them and all first responders who risk their safety every day to protect our communities and keep the peace,” Cardinal Cupich said. French and her partner pulled over a driver for having expired tags on the car. After initially being cooperative, news reports said, the occupants of the car fatally shot French and critically wounded her partner. Brothers Emonte Morgan, 21, and Eric Morgan, 22, have been charged in French’s killing. A third person, an Indiana man, has been charged with buying the gun used in the fatal shooting. It was a “straw purchase,” because a felony prevented the alleged shooter from buying the gun himself.

A possible miracle may be attributed to Tennessee priest’s intercession

CHATTANOOGA, Tenn. (CNS) — As Bishop Richard F. Stika of Knoxville, Tennessee, presided at a memorial Mass and reentombment of the body of Father Patrick Ryan at the Basilica of Sts. Peter and Paul, a possible miracle attributable to the Chattanooga priest may already be in the works. Father Ryan was pastor of the downtown Chattanooga parish when he ministered to yellow fever victims, then died of the disease himself in 1878, just a day short of his 34th birthday. “A life well lived, a short one. There’s no greater gift than to give your life for your friends,” the bishop said during the July 31 Mass. Father Ryan is a candidate for sainthood. His cause was officially opened in 2016, granting the priest the title “Servant of God.” Among several women who placed flowers in the priest’s tomb at the end of Mass was Teresa Shramko, who believes prayers to Father Ryan have resulted in her son beginning to recover from life-threatening injuries he sustained when he fell out of a second-story window in April. Her son has begun to talk and to learn to walk again after coming out of a medically induced coma, and Shramko considers it miraculous. Two verified miracles attributed to Father Ryan’s intercession would be needed for him to be declared a saint. In general, one is needed for beatification and one for canonization.

GETTYSBURG, Pa. (CNS) — At vocational discernment gathering of the Neocatechumenal Way in the U.S. this summer, over 10,000 participants were encouraged to realize that they have “something to do so that the Church may become the Church.” That message was from Archbishop Christophe Pierre, apostolic nuncio to the U.S., who also told the young people that what they experienced at the gathering is “what the Church is all about.” “God has called us to become, as the Church, the living sign of his presence in the world,” he told them at the July 25 event at the Historic Daniel Lady Farm in Gettysburg, part of the town’s vast Civil War battlefield. Most of the participants arrived in buses from different parts of the country after over a week of being on pilgrimage, stopping at sites linked to the lives of U.S. saints, including Sts. Kateri Tekakwitha, Frances Cabrini and Junipero Serra, and those on the road to canonization, such as Blessed Solanus Casey in Michigan and Jesuit Father Eusebio Kino, who has the title “Venerable,” in Arizona. Also present at the gathering in Gettysburg was Cardinal Wilton D. Gregory of Washington, Bishop Peter Baldacchino of Las Cruces, New Mexico, catechist teams of the Neocatechumenal Way and the religious sisters working at the apostolic nunciature in Washington.

VATICAN CITY (CNS) — Mary’s assumption into heaven reminds people that they are also called by God to eternal life in heaven through humility and serving him, Pope Francis said. After reciting the Angelus prayer on the feast of the Assumption Aug. 15, Pope Francis also prayed that those enjoying the summer holiday would find “serenity and peace. I cannot, however, forget those who cannot go on vacation, those who remain to serve the community and those who find themselves in distressing conditions, aggravated by the intense heat and by the lack of certain services due to the holiday,” he said, especially the ill, the elderly, the incarcerated, the unemployed, refugees and “all those who are alone or in difficulty. May Mary extend her maternal protection over each one of you,” he said, and he invited people to “perform a beautiful gesture” by going to a Marian shrine to venerate Our Lady. Mary’s secret is humility, the pope said before praying the Angelus. “It is her humility that attracted God’s gaze to her,” he said.

WASHINGTON (CNS) — The chairmen of the U.S. bishops’ religious liberty and pro-life committees said Aug. 12 that the U.S. Department of Justice “is acting in dereliction of its duty to enforce the plain meaning of federal law” by voluntarily dismissing a civil lawsuit against a hospital that forced nurses to assist in elective abortions against their religious beliefs. “It is hard to imagine a more horrific civil rights violation than being forced to take an innocent human life,” said Cardinal Timothy M. Dolan of New York, chairman of the U.S. Conference of Catholic Bishops’ Committee for Religious Liberty, and Archbishop Joseph F. Naumann of Kansas City, Kansas, chairman of the USCCB’s Committee on Pro-Life Activities. “This is not only deeply wrong, but a violation of federal law,” they said. “We call on the administration to stand up for the basic dignity of our nation’s health care workers by reopening this case, and on Congress to pass the Conscience Protection Act so that doctors and nurses can defend their own rights in court.” The Justice Department said it was dropping a case against the University of Vermont Medical Center that the department had brought in December 2020, under the Trump administration, after the Office for Civil Rights in the U.S. Department of Health and Human Services found that the medical center forced a nurse to participate in an elective abortion. “Plaintiff United States notices dismissal of this action,” stated a filing submitted July 30 by Jonathan Ophardt, the acting U.S. attorney for Vermont, and Matthew Donnelly, an attorney with the Justice Department’s Washington-based Civil Rights Division. 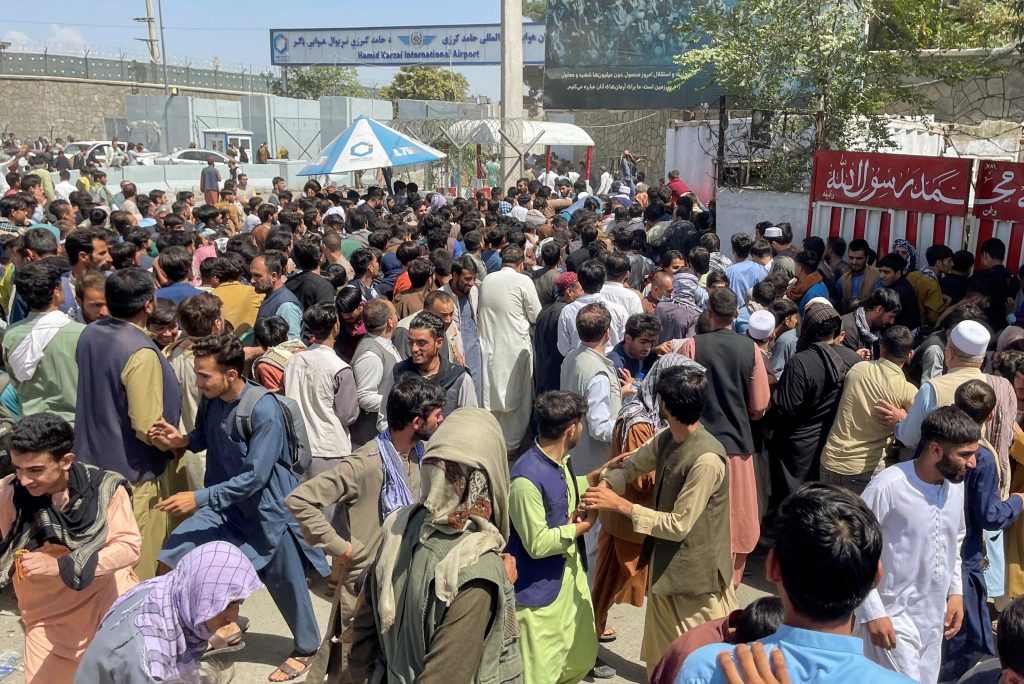 People try to get into Hamid Karzai International Airport in Kabul, Afghanistan, Aug. 16, 2021. During his Angelus address Aug. 15, Pope Francis expressed his concern for Afghanistan amid the Taliban’s control of the country. (CNS photo/Reuters)