WASHINGTON, D.C. (CNS) – As the nation awaits the U.S. Supreme Court’s most significant abortion ruling in decades, the president of the U.S. Conference of Catholic Bishops and the chairmen of eight USCCB committees said they “join together in prayer and expectant hope that states will again be able to protect women and children from the injustice of abortion.” “As we affirm the value of every human life, we welcome the possibility of saving countless unborn children as well as sparing women and families the pain of abortion,” they said in a statement released on March 21. In June or early July, the court will issue a ruling in Dobbs v. Jackson Women’s Health Organization, which involves a Mississippi law that bans most abortions after 15 weeks. It is expected the decision will overturn the 1973 Roe v. Wade decision legalizing abortion nationwide, returning the abortion issue to the states. In their statement, Los Angeles Archbishop José H. Gomez, USCCB president, and the chairmen of USCCB committees concerned with pro-life, domestic and international policy, evangelization and other issues recommitted the Catholic Church’s years-long outreach – through various initiatives, parishes, agencies and other entities – to pregnant women in need and their children and families. They urged Catholic dioceses, parishes, agencies and institutions to do the same. The full statement can be found online at bit.ly/3IB9T0d.

AUSTIN, Texas (CNS) – The Texas Catholic Conference of Bishops said they were grateful for the first responders fighting wildfires raging across the state and offered prayers for them and all who have been affected by the natural disaster. “We pray for the first responders and for the community members, as they work together to salvage homes, businesses and lives,” the Texas bishops said in a statement released on March 21. “We are grateful for their dedication and their generosity toward their neighbors. Let us also remember those who have been harmed physically and materially by the fires, especially the deceased,” they added. “May they find comfort in our prayers and in the mercy and charity shown to them.” The Texas A&M Forest Service said on March 21 that 178 wildfires had burned more than 108,000 acres across the state since the wildfires started on Feb. 23. Gov. Greg Abbott issued a disaster declaration on March 17 for 11 Texas counties to help them in the aftermath of the fires; he said more counties could be added. The largest fire, named the Eastland Complex, has engulfed the town of Carbon and more than 54,000 acres, claiming at least one life and leaving many families homeless.

WASHINGTON, D.C. (CNS) – The Biden administration said on March 24 that the United States plans to welcome up to 100,000 Ukrainians as refugees. This was announced while President Joe Biden joined European leaders for a high-stakes NATO meeting in Brussels, where he pledged during a news conference that the U.S. will provide $1 billion in humanitarian aid for Ukrainians. “While we expect many Ukrainians will choose to remain in Europe close to family and their homes in Ukraine, today the United States is announcing plans to welcome up to 100,000 Ukrainians and others fleeing Russia’s aggression,” the White House said in a statement posted online. The statement said potential refugees could enter “through the full range of legal pathways, including the U.S. Refugee Admissions Program,” but it also said the Biden administration is “working to expand and develop new programs with a focus on welcoming Ukrainians who have family members in the United States.” The statement emphasized humanitarian aid the U.S. is also sending to neighboring nations taking in those fleeing Ukraine.

Madeleine Albright is remembered as diplomat and teacher

WASHINGTON, D.C. (CNS) – Madeleine Albright, former U.S. ambassador to the United Nations, the first female Secretary of State and longtime professor at Georgetown University’s Walsh School of Foreign Service, died on March 23 in Washington, D.C. She was 84. “We have lost a loving mother, grandmother, sister, aunt and friend,” her family said in a statement, adding that Albright died of cancer. During her years as Secretary of State, Albright frequently briefed Vatican diplomats on situations from the peace process efforts in the Middle East to tensions in Kosovo. And in her nearly 40 years at Georgetown, she inspired students “not only to understand the world, but to serve the world. Generations of her students went on to do just that, a legacy that is almost incalculable in its reach,” said Joel Hellman, dean of the university’s Walsh School of Foreign Service. “For all her accomplishments, Albright always said that first and foremost she was a professor. She began teaching at the School of Foreign Service in the fall of 1982, and from that moment on, she was a fixture on campus and in the lives of our students,” Hellman said. He noted that despite her many commitments around the world, she rarely missed the class she taught on the foreign policy toolkit and always made time to meet all of her students – more than 2,000 throughout her career.

‘It was over in four Hail Marys,’ says survivor of New Orleans tornado

NEW ORLEANS, Louisiana (CNS) – Michael Baiamonte took shelter with family members in a closet in their home as the strongest tornado to hit the New Orleans area in five years took direct aim at his neighborhood. “It was crazy,” he told the Clarion Herald, New Orleans’ archdiocesan newspaper. “It was over in four Hail Marys. That’s how I know. It took me four Hail Marys from the time we got in that closet.” The tornado ripped through several Arabi neighborhoods on March 22, killing one man, destroying 40 homes and severely damaging more than 100 others in neighborhoods submerged by Hurricane Katrina in 2005. The National Weather Service preliminarily classified the tornado as an EF-3, with winds ranging from 135-165 mph. It ripped through a two-mile swath of Arabi in St. Bernard Civil Parish, just east of New Orleans. “One death is too many, but it’s a miracle we had only one death,” said Guy McInnis, the civil parish’s president. “It seems like it should have been worse.” “It’s heartbreaking, it’s devastating,” said New Orleans Archbishop Gregory M. Aymond, who toured the rubble with Louisiana Gov. John Bel Edwards on March 23. “We know the people of St. Bernard Parish are a resilient people, but they are more than that. They are people of deep faith.”

ADDIS ABABA, Ethiopia (CNS) – Cardinal Berhaneyesus Souraphiel of Addis Ababa welcomed a humanitarian truce to allow aid to reach millions of people in the war-affected region of Tigray. The government announced the indefinite and immediate truce on March 24 and urged the Tigray defense forces to desist from all acts of further aggression. In response, Tigrayan military leaders said they had accepted the offer for a truce if it would allow aid to reach the millions of people in urgent need in their region. “The Church welcomes the government’s announcement of a truce in hopes that it will help the innocent people affected by the war,” Cardinal Souraphiel told journalists on March 24, during a meeting of the Social and Development Commission of the Catholic Church in Ethiopia. The war in Tigray – a semi-autonomous region in the north of Ethiopia – broke out in November 2020 after months of tensions between the government and regional leaders. Within 16 months, the conflict has killed thousands and displaced millions of people from their homes. Despite a warning that starvation was threatening millions, no relief aid has reached the region since mid-December, according to officials in the Diocese of Adigrat. In January, the World Food Program said nearly 40% of the people in Tigray suffered from extreme food shortages. 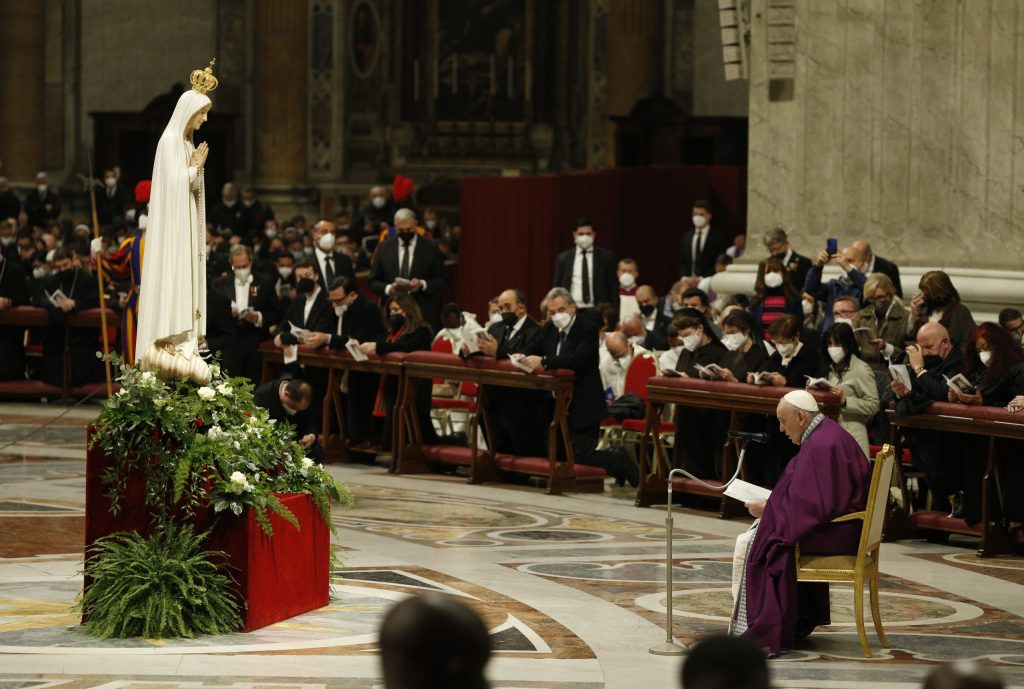 Pope Francis consecrates the world and, in particular, Ukraine and Russia to the Immaculate Heart of Mary during a Lenten penance service in St. Peter’s Basilica at the Vatican March 25, 2022. (CNS photo/Paul Haring)