COLUMBUS, Ohio (CNS) — Ohio Gov. Mike DeWine signed a bill that would make it illegal to carry out an abortion once a fetal heartbeat is detected. “The function of government is to protect the most vulnerable among us, those who do not have a voice. Government’s role should be to protect life from the beginning to the end, to protect those who cannot protect themselves, such as the elderly, the unborn, those who are sick, those who have mental illness or have an addiction,” DeWine said at a mid-afternoon signing ceremony at the Ohio Statehouse April 11. “The signing of this bill is consistent with that respect for life and to ability to sign protect those who cannot protect themselves,” added DeWine, a Republican who is Catholic. A fetal heartbeat can be detected as early as six weeks into a pregnancy, a timeframe in which many women are unaware they are pregnant. Opponents of the measure, including American Civil Liberties Union of Ohio, have pledged to challenge the law in court. The Ohio House April 10 voted 56-40 in favor of the bill. Agreeing with the House’s changes in the legislation, the Senate adopted it a short time later, 18-13, sending it DeWine for his signature. Both votes occurred mostly along party lines with Republicans lined up in favor of it and Democrats opposed.

WASHINGTON (CNS) — The U.S. bishops support efforts in Congress “to fully integrate hard-working ‘Dreamers’ and TPS holders” into the U.S., said Bishop Joe S. Vasquez of Austin, Texas. “We need a permanent legislative solution for those who have spent their lives contributing and living in the United States, the country they know as home,” the chairman of the U.S. Conference of Catholic Bishops’ Committee on Migration said in a statement released late April 10. Bishop Vasquez endorsed two pieces of legislation under consideration in the Senate. The first is the Development Relief and Education for Alien Minors Act of 2019, or DREAM Act (S. 874). The name “Dreamers” is taken from the bill’s title and refers to the young adults who were brought by their parents to the U.S. illegally as children and remain in the country under the Deferred Action for Childhood Arrivals, or DACA. The second bill relates to TPS holders — TPS stands for Temporary Protected Status — and those protected under Deferred Enforced Departure, or DED. The measure is the Safe Environment from Countries Under Repression & Emergency Act of 2019, or the SECURE Act (S. 879). “Dreamers and TPS holders are vital members of our community who are going to school, working to make our communities better and raising families,” Bishop Vasquez said.

WASHINGTON (CNS) — The chairman of the U.S. bishops’ pro-life committee called on Congress to pass a measure that would stop “the barbaric practice of late-term abortion.” He urged Congress to pass the Pain-Capable Unborn Child Protection Act, which was the focus of a hearing April 9 by the Senate Judiciary Committee. “This bill draws the public’s attention to the shameful reality that the United States is one of only seven nations worldwide that allows the barbaric practice of late-term abortion, when a child likely feels pain and might even live outside the womb with appropriate medical assistance,” said Archbishop Joseph F. Naumann of Kansas City, Kansas, who is chair of the U.S. Conference of Catholic Bishops’ Committee on Pro-Life Activities. “Such abortion procedures after the middle point of pregnancy also pose serious physical dangers to women,” he said in a statement. “With the vast majority of Americans strongly supporting a ban on late-term abortions, it is time for Congress to pass this bill.”

Devil targets those who succumb to despair, negativity, pope says

VATICAN CITY (CNS) — Sometimes Christians seem to prefer complaining and being unhappy in life, but that makes them a perfect target for the devil, Pope Francis said in a morning homily. “Desolation is from the serpent,” who tempted Eve in the Garden of Eden and who “always bites” when a person sinks in despair, the pope said April 9 at morning Mass in the chapel of his residence, the Domus Sanctae Marthae. In his homily, the pope reflected on the first reading from the Book of Numbers (21:4-9) in which the people of God, after escaping slavery in Egypt, lose their patience and complain about their difficult situation, “worn out by the journey.” God punishes them by sending venomous serpents, but then offers an antidote — a chance at salvation — after the people recognize their sin of complaining against God and Moses. The sensation of being “worn out removes hope from us,” the pope said. Fatigue gives people a “selective” memory; “it always makes us see the bad side of what we are going through and forget the good things that we have received. When we are in anguish, we cannot stand the journey and we seek refuge either in idols or in grumbling” or in other ways that show nothing is pleasing or satisfactory, he said.

WASHINGTON (CNS) — More than 140 religious leaders, including the chairmen of three U.S. Conference of Catholic Bishops’ committees, called on President Donald Trump, Vice President Mike Pence and congressional leaders to uphold principles of religious freedom following a series of attacks on people of faith, clergy and houses of worship. In an April 4 letter, the leaders urged Trump and the other U.S. leaders to recognize that “individuals of all faiths and none have equal dignity, worth and rights to religious freedom.” The letter outlined an additional seven principles, among them affirmation that a person “is not more or less American because of his or her faith,” confirming religious practice without fear of harm, and the unacceptability of “scapegoating, stereotyping and spreading false information” about any person or community. Among those signing the letter were Archbishop Joseph E. Kurtz of Louisville, Kentucky, Bishop Joseph C. Bambera of Scranton, Pennsylvania, and Archbishop Timothy P. Broglio of the U.S. Archdiocese for the Military Services. They are the chairmen of the committees for Religious Liberty, Ecumenical and Interreligious Affairs, and International Justice and Peace, respectively. Besides Trump and Pence, the letter was addressed to House Speaker Nancy Pelosi, D-California; House Minority Leader Kevin McCarthy, R-California; Senate Majority Leader Mitch McConnell, R-Kentucky; and Senate Minority Leader Chuck Schumer, D-New York.

WASHINGTON (CNS) — In the 1950s, Archbishop Fulton Sheen was able to captivate the nation with his television program “Life Is Worth Living,” where his theological discussions in front of a chalkboard were often able to rival the likes of Milton Berle and Frank Sinatra during the prime-time slot. Catholics nowadays have no such media muscle, but one priest seeks to change that. Father Peter Stravinskas, of the Priestly Society of Blessed John Henry Cardinal Newman, is starting a new retreat that he hopes will teach journalists, nonfiction writers, novelists and poets alike to be strong voices for Catholicism in an increasingly secular media world. Simply dubbed the “Catholic Writers Retreat,” it will take place June 7-9 at Seton Hall University in South Orange, New Jersey. A variety of topics will be covered, including what Catholic editors look for when choosing stories to publish and how to cover the Vatican. In an April 10 phone interview with Catholic News Service, however, Father Stravinskas also emphasized how the workshop will push writers to produce material from a “Catholic perspective” without delving into explicitly religious territory. “A Catholic writer has a unique worldview” even on topics that aren’t overtly religious, the priest said. “There is a Catholic take on ethics … even secular values.” 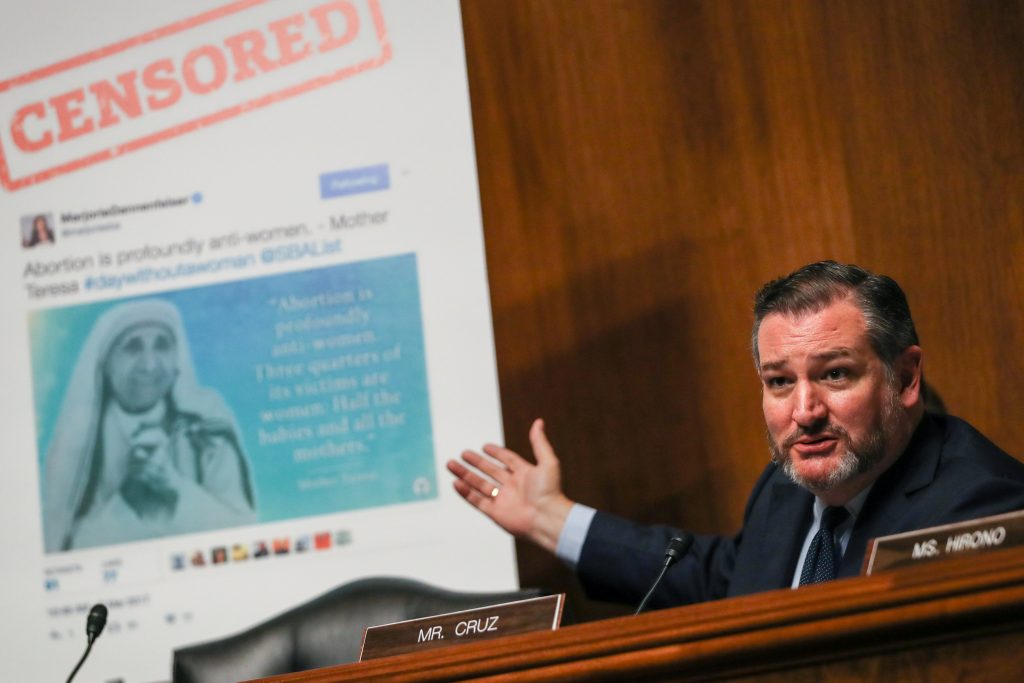 Sen. Ted Cruz, R-Texas, displays a board with an image of St. Teresa of Kolkata during an April 10, 2019, hearing of the Senate Judiciary Committee’s Subcommittee on the Constitution on Capitol Hill in Washington. The title of the hearing was “Stifling Free Speech: Technological Censorship and the Public Discourse.” (CNS photo/Jeenah Moon, Reuters)