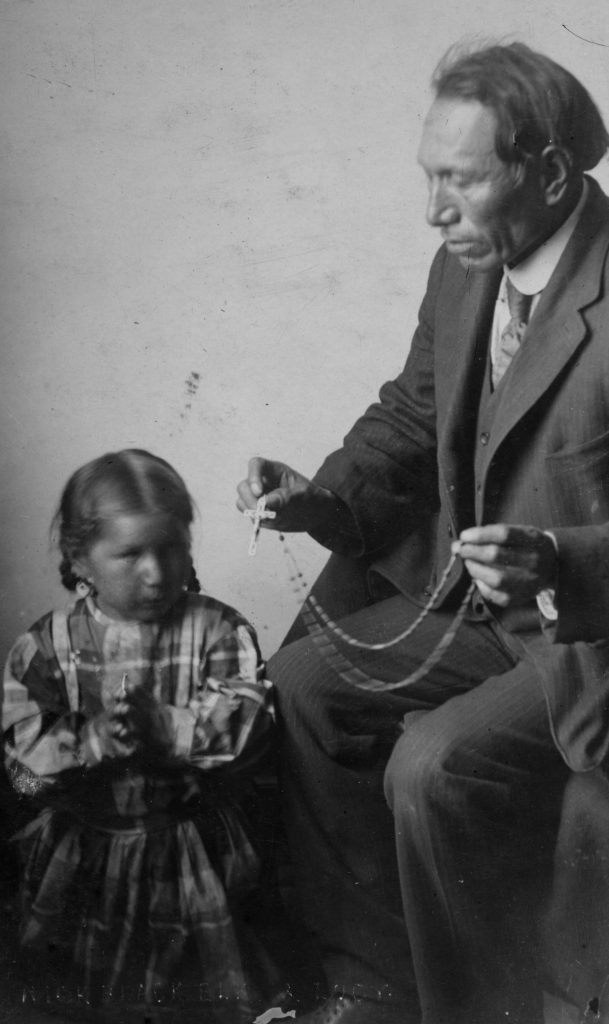 Nicholas Black Elk is pictured in an undated historical photo teaching a girl how to pray the rosary. Bishop Robert D. Gruss of Rapid City, S.D., celebrated an Oct. 21 Mass at Holy Rosary Church in Pine Ridge, S.D., to open the sainthood cause for the Native American. (CNS photo/courtesy Marquette University)

Priest resigns as consultant on doctrine after letter to pope

WASHINGTON (CNS) — After publication of his letter to Pope Francis questioning the pontiff’s teachings, Father Thomas Weinandy has resigned from his position as consultant to the U.S. Conference of Catholic Bishops’ Committee on Doctrine. The Capuchin Franciscan priest is former executive director of the U.S. bishops’ Secretariat of Doctrine and Canonical Affairs, serving in the post from 2005 until 2013. He expressed loyalty to the pope but told him that “a chronic confusion seems to mark your pontificate.” He released his letter to several Catholic and other media outlets Nov. 1, including Crux. The priest told Crux, a Catholic news outlet, he did not write the letter in an “official capacity,” and he was alone responsible for it. James Rogers, chief communications officer for the USCCB, confirmed Father Weinandy resigned his position as a consultant to the USCCB Committee on Doctrine. In a separate statement, Cardinal Daniel N. DiNardo of Galveston-Houston, USCCB president, said the priest’s resignation “gives us an opportunity to reflect on the nature of dialogue within the church.” He said it should be acknowledged “legitimate differences exist,” but he urged all involved in church debates exercise “Christian charity.”

WASHINGTON (CNS) — The Senate confirmed Amy Coney Barrett, a Notre Dame law professor, to a lifetime appointment as a federal judge on the U.S. Court of Appeals for the 7th Circuit. Barrett, who joined Notre Dame’s law school’s faculty in 2002, teaches and researches in the areas of federal courts, constitutional law and statutory interpretation. President Donald Trump nominated her in May to fill a vacant seat on the 7th Circuit, a jurisdiction that covers Indiana, Illinois and Wisconsin; but at her nomination hearings in September, Barrett, who is Catholic, had been grilled about the impact her faith would have on her interpretation of the law.

WASHINGTON (CNS) — As November began, the people of Puerto Rico still faced “an unprecedented level of need” because of hurricanes Irma and Maria, which devastated the island in September, said the chairmen of two U.S. bishops’ committees. They called for “meaningful action” through legislative means and emergency funds to address “both the immediate and long-term needs of the Puerto Rican population.” They also urged Catholics and all people of goodwill to show support of “our brothers and sisters in such dire need.” Irma hit Puerto Rico Sept. 7 and Maria hit Sept. 20, creating even more destruction than the first hurricane. To date, more than 70 percent of Puerto Rico is without electricity and running water. Other islands, including the U.S. Virgin Islands, are also facing challenges in their recovery. In statements issued right after the storms, Cardinal Daniel N. DiNardo of Galveston-Houston, president of the U.S. Conference of Catholic Bishops, urged Catholics to respond with prayer and other help “in this time of great need for our brothers and sisters in harm’s way —many of whom have been hit repeatedly by the successive hurricanes.”

WASHINGTON (CNS) — Thoughtful deliberation rather than hurried action is required on the tax bill introduced by Republicans in the House of Representatives, said the chairman of the U.S. bishops’ Committee on Domestic Justice and Human Development. Bishop Frank J. Dewane of Venice, Florida, also called for prudence on the part of Congress and the American public so that all the provisions in the Tax Cuts and Jobs Act are fully understood. “The changes proposed in this bill are significant and complex, affecting the entire nation,” Bishop Dewane said in a statement Nov. 3, a day after the bill was unveiled. “Current information indicates the House is planning to move this bill through the legislative process. However, prudence requires that members of Congress and the people of the country have adequate time to fully understand and debate the consequences of any tax bill so that decisions serve the dignity of the human person and the common good,” he said.

WASHINGTON (CNS) — Dialogue is the way to reduce tensions in the “hair-trigger” nuclear crisis between the United States and North Korea, agreed all three panelists Nov. 2 at a Georgetown University forum on the issue. “If you keep it at a confrontational level, United States vs. North Korea, and keep the rhetoric hot, you know where that’s going to go,” said Chuck Hagel, a former U.S. defense secretary, Republican senator from Nebraska and Vietnam War veteran. “If you bring in others, that insulates the heat,” Hagel added. “The most successful agreements that have been reached since World war II are multiparty agreements.” Hagel called for “diplomacy at the most basic level, of coming down and saying, ‘What do you want?’” “We need to open the dialogue,” said Stephen Colecchi, director of the U.S. bishops’ Office of International Justice and Peace. “The only way to open up the relationship is by talking.”