Ending homelessness is about more than giving a person a bed for the night, say two members of the board of directors of St. Joseph Missions. It is about lifting people out of the cycle of homelessness and addiction, raising their dignity as children of God and teaching them how to move forward with confidence.

Represented by Dr. Monique Hartle, president, and Lisa Fabian, executive director, the recently formed organization longs to tackle the root causes of homelessness as their new shelter for single women prepares to open in Fort Wayne in 2021. 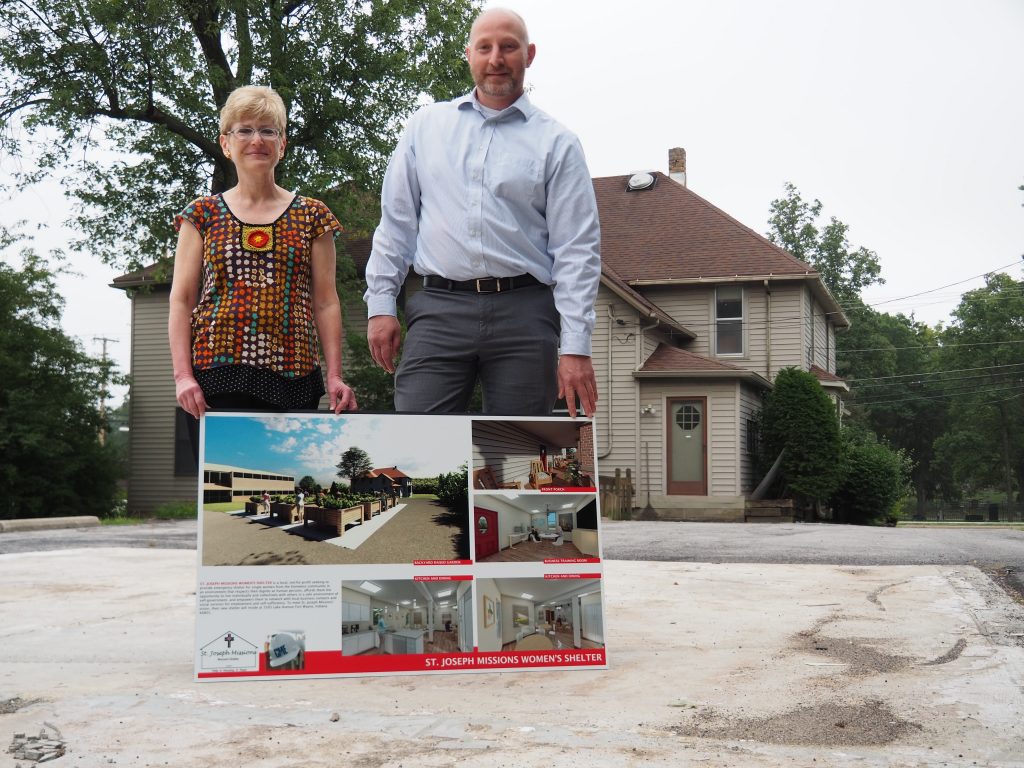 Executive director of St. Joseph Missions Lisa Fabian and board member Nathan Moore, AIA, pose with a display board of the renovation plans for the house that will become a homeless shelter for single women in Fort Wayne.

Of the ministry, Fabian related, “It was founded by a group called Catholics on a Mission. They were bringing food, supplies and love to the homeless twice a month downtown, and they realized that they were seeing the same faces over and over. We think we’re called to do something more for our homeless neighbors.” From these early efforts, a board of directors came together in 2016 and began to research how to best aid those who find themselves living on the street.

The directors did extensive research into the city’s most critical need and found that single women were the most underserved homeless population in Fort Wayne. In Fabian’s mind, it was unthinkable that a woman had to suffer abuse or addiction before she was given access to a safe place to get back on her feet.

The shelter will be, first and foremost, emergency housing, and as of yet there is no set time limit that women can stay. Hartle said, “Our goal is to be almost like a clearinghouse for these women. They’ll come in and the first seven days will be a rest period so they can be safe and figure out what they want to do and if they’re willing to commit to making a change in their life, because our goal is to end their cause of homelessness.”

During the rest period, guests will collaborate with social workers to determine what services they need. “We’re going to be using other organizations in Fort Wayne so that we’re not duplicating services. Some people might need vocational training, some might need drug and alcohol counseling, whatever the case may be,” Hartle explained.

The women who seek help at St. Joseph Missions must be prepared to make serious changes in their lives if they wish to remain at the home. If not, they will have to leave. 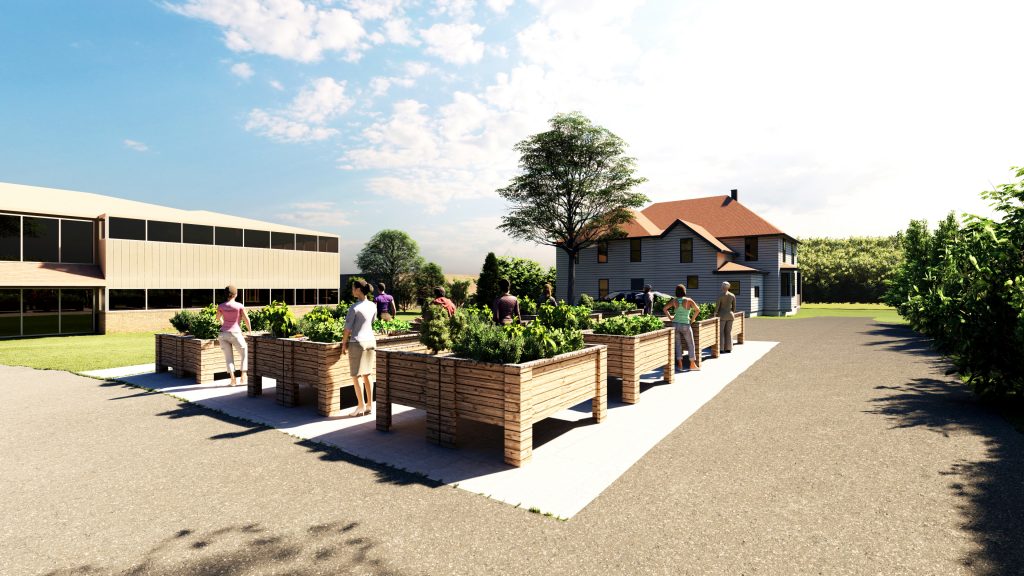 A computerized visual created by CME Construction shows how the concrete patio will support a raised garden that will be cared for by the shelter’s residents.

Education is a large part of the necessary changes. St. Joseph Missions will offer classes in areas such as cooking, life skills and — most importantly — financial literacy, which is essential to helping women turn their lives around. Hartle sees these classes as a great way for retired accountants or those with domestic skills to give back to those less fortunate.

“Those of us who have should take care of those who don’t. This is an opportunity for us to do that . … I do this job for Him, because we have to answer for what we do and I think it’s important to do the best you can while you’re here.”

In researching the causes of homelessness, board members spoke to formerly homeless people, including a current board member, to gain insight into the needs of the people they will be serving. Among the things they learned are the importance of a daily schedule and ways to earn the women’s trust.

“Those are things we need to know. It’s wonderful to think that we’ll think of everything, but until you’ve lived through that experience, you don’t,” Fabian said.

Fabian affirmed that, saying, “That’s the power of one. You can change someone’s life just by believing in them and letting them know (that you do). … If you don’t give and you don’t volunteer, then that opportunity is gone. One of the greatest gifts we’re ever given is the potential that lies inside each one of us.”

One of the board members, Nathan Moore, is a certified architect who used his experience to acquire a federal Emergency Solutions Grant. This will fund extensive renovations to ensure that the house will be structurally sound for at least the next 10 years. Renovations are expected to begin in October.

At its roots, the shelter is a Catholic, Christian foundation, serving the homeless through the example of the people who run it. Morning devotional and Bible studies will be offered, both of which are optional, though Hartle learned from similar shelters that guests often find faith elements to be instrumental in their healing. A grant from the Diocese of Fort Wayne-South Bend will allow for the inclusion of a chapel within the home.

The home is prepared to handle women with disabilities, and the board expects many residents will be afflicted with mental illness. St. Joseph Missions is also working with organizations such as Catholic Charities to aid women rescued from sex trafficking.

“Hopefully we will be seeing those women again — not as people who need our shelter, but as inspiration for the current women at the shelter. Some even say, ‘my story was even worse than yours and I’ve made it.’ … We’re calling this sisterly love,” Fabian said.

Although the shelter has not yet opened, many individuals and groups in the Fort Wayne area have already embraced the ministry, helping raise money for supplies, donating items such as hand-stitched quilts and pledging to paint murals to enliven the home. A wish list will also be available on the website, www.stjosephmissions.org, along with additional ways to donate or to become involved in the ministry.

Vital to the success of the shelter, said Fabian, is to “respect the dignity of the individual, reinforcing their self-worth. We’re there to raise them up, not drag them down. That’s the only way they will get the confidence to achieve self-sufficiency and ultimately, fulfill their glorious potential.”