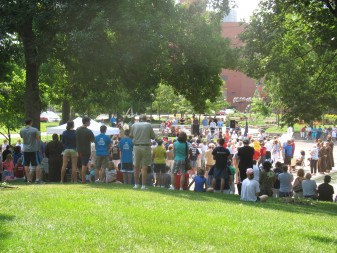 The day after a devastating thunderstorm struck several Midwestern and Eastern states on June 29, a crowd of nearly 300 made their way into downtown Fort Wayne to attend a “Stand Up for Religious Freedom” rally sponsored by Allen County Right to Life.

FORT WAYNE — A second Stand Up for Religious Freedom rally took place on June 30 with nearly 300 people in attendance. Held at Freimann Square in downtown Fort Wayne, the event was sponsored by Allen County Right to Life (ACRL) in opposition to the United States Department of Health and Human Services (HHS) mandate under the Affordable Care Act that requires all employer health plans to provide free contraception, sterilizations and abortion-inducing drugs, regardless of any moral or religious objections.

Sean McBride, communications director for the diocese, opened the event by reading a letter from Bishop Kevin C. Rhoades, ordinary of Fort Wayne-South Bend, welcoming those in attendance, thanking them “for calling for religious freedom” and adding “we must be free to live the Gospel in the public square.”

“The HHS mandate violates the First Amendment,” Bishop Rhoades continued. “We must not allow the weakening of religious liberty in our beloved nation,” he concluded.

“… The Supreme Court … in a closely divided decision, upheld one of the most sweeping pieces of legislation to ever pass the United States Congress and gain the signature of the President of the United States,” said Everett in his opening remarks. “Not only sweeping in scope and in its effects on the fiscal and healthcare future of our country, this law, the Affordable Care Act, has, for the first time, put the financial resources of the federal government in support of subsidizing abortion on demand throughout this country. This is something new,” Everett emphasized.

“Soon after the infamous Roe v. Wade decision was handed down by the Supreme Court in 1973, Congress limited federal abortion spending to the relatively few instances of pregnancies that endangered the life of the mother or, later on in the ‘90s, that were the result of rape or incest,” Everett explained. “Known as the Hyde amendment, this statutory provision guaranteed that the federal government would not be financially subsidizing abortion on demand… Those days are now over.”

“This so-called HHS mandate… is very troubling, especially for those of us who hold religious freedom dear. So troubling, in fact, that many Christian institutions took the extraordinary step … of filing suit in federal court asking for relief.

“There are two main reasons behind these suits. The first, and most obvious, is because it would coerce conscientiously opposed employers to subsidize or directly fund ethically problematic drugs or devices, especially those that result in the killing of an embryonic human being only several days or weeks old,” said Everett. “Especially for those organizations that are self-insured like the Diocese of Fort Wayne-South Bend, this would put my employer in the position of actually paying for these types of services directly. While the administration announced a so-called accommodation back in February in which private insurers would be required to pay for these services, this only addressed those religious organizations that had third party insurers not those like the diocese that act as their own insurer.”

“The second reason … is that it seeks to provide a new definition of what qualifies as a religious organization. No longer is it sufficient that an organization is inspired by religious principles and seeks to serve the common good of all society. The HHS religious exemption is so narrowly tailored that it only exempts those religious institutions whose mission is primarily to inculcate religious values and whose employees and those they serve are of the same faith,” he said. Organizations that seek to serve others — regardless of religious affiliation — apparently do not qualify as religious enough. Everett said this is why organizations as diverse as the Salvation Army or the Union of Orthodox Jewish Congregations of America have voiced their opposition to the HHS mandate. As many commentators have now observed, Jesus Christ and His Apostles would not even have qualified for this religious exemption, Everett emphasized.

“Devout Christians, along with Orthodox Jews and religiously observant Moslems, are in the crosshairs,” he stressed.

“What this means is that instead of defending religious liberty as long understood in the tradition of our country, this administration and their secularist allies now only defend what they call the freedom of worship. In other words, as long as you go to your church, your synagogue or your mosque to pray and worship, and don’t try to engage the general public in dialogue or service, you’re okay. Otherwise, you might pose a threat to the secularist vision of what human society should look like — one that promotes sexual license, an ambivalent attitude to marriage and a willingness to strip human dignity from people at the beginning or end of life who are inconvenient or unproductive.”

“Our country is indeed at a crossroads,” he added. The fastest growing religious affiliation in our country is no religion — making up one in six Americans. “We cannot expect that a country that is losing its religious convictions to appreciate the importance of religious freedom. That is why this effort to defend our religious liberty must go far beyond a legal or political effort. It must be a spiritual and cultural effort. Our main tools in this must be to promote the truth in charity. We must break the cycle of anger and recrimination that fosters ever-increasing levels of discord and polarization in our country. We must reach out in friendship to those who view religion with suspicion. We must make the case for the importance of virtue and religion to society. In the end, democracy cannot be sustained without a commitment to fundamental moral truths. Only seeking a wisdom that comes from above will sustain our religious liberty here below,” Everett concluded.

The next religious freedom rally will be held Saturday, Aug. 11, at 10 a.m. at a location yet to be announced. It will feature Third District U.S. Congressman Marlin Stutzman.