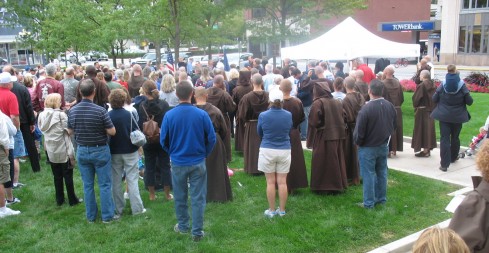 A crowd of nearly 300 assembled on the Allen County Courthouse green in downtown Fort Wayne on Aug. 11 for the third “Stand Up for Religious Freedom” rally sponsored by Allen County Right to Life. This peaceful and prayerful rally celebrated liberty, and informed the public regarding what can be done to stop the infringements on rights protected by the United States Constitution.

FORT WAYNE — A third “Stand Up for Religious Freedom” rally took place on Aug. 11 with nearly 300 people in attendance. Held at the Allen County Courthouse green on the corner of Clinton and Main streets in downtown Fort Wayne, the event was sponsored by Allen County Right to Life in opposition to the United States Department of Health and Human Services (HHS) mandate under the Affordable Care Act that requires all employer health plans to provide free contraception, sterilizations and abortion-inducing drugs, regardless of any moral or religious objections.

Sean McBride, communications director for the diocese, opened the rally and welcomed attendees. Father Jason Freiburger, vice chancellor of the diocese, gave the invocation. Guest speakers included Dr. Thomas W. McGovern, who shared the impact of the Affordable Care Act on patients and doctors, Congressman Marlin Stutzman, who gave a briefing on efforts to repeal the Care Act and the encroachment of government on religious liberty, and Pat Miller, who presented an outline for winning at the ballot box in November.

A doctor’s view
of Obamacare

“I have been serving the culture of life as a physician for the last 22 years,” Dr. McGovern said in his opening remarks. “In the year 2000, my family settled in Fort Wayne, where my wife and I have been raising our seven kids and I have been practicing dermatology with a focus on the treatment of skin cancer.”

Dr. McGovern said, as a physician, he is obligated and trained to support and serve the culture of life. “I would like to lay out how this culture works using three little words — can, should and must. I will apply this to three areas affected by the HHS mandate — contraception, abortion and religious freedom.

HHS says, “Scientists have abundant evidence that birth control has significant health benefits for women and their families …” Dr. McGovern related. “As a physician, I would be remiss if I did not challenge this statement.”

The doctor related that mandate classifies pregnancy and fertility as diseases, and combination oral contraceptives increase health issues among women.

With regard to abortion, the first laws in the nation’s history that said that a woman can have an abortion in limited cases, such as rape or incest, were passed in 1967, Dr. McGovern said. “And now the HHS mandate says that we must underwrite the cost for certain abortion-causing drugs. … The American College of Obstetrics and Gynecology says that physicians who believe abortion is wrong must refer patients who want any form of ‘legal’ medical care — including abortion — to physicians who will perform them. In the culture of death, the ‘legal’ becomes the ‘ethical;’ the ‘should’ becomes a ‘must,’” he continued.

With regard to religious freedom, the country was founded because victims of religious persecution sought a home where they could freely exercise their religious beliefs in the three arenas of words, works and worship, Dr. McGovern said.

“In words, they sought the freedom to speak about what they believed — even in the public square and in legislative bodies. They sought to perform works of charity — mandated by their beliefs — that would meet the needs of all persons, regardless of their faith. … Our laws have said that we can freely exercise our religious beliefs in words, works and worship,” he said.

“During the last three-and-a-half years, whenever our president or secretary of state spoke about freedom of religion, they used the phrase ‘freedom of worship.’ This is significant,” he continued, “words and works are thus silently exempted from our freedom of religion.”

“We physicians are being pressured by the culture of death to leave our religious beliefs at the doors of our hospitals and clinics. But if all of us work to protect religious liberty, we will create a culture where a physician can still practice and promote the culture of life,” he stressed. “If we do not protect our religious liberty, physicians may be forced to choose between abandoning their moral principles or abandoning their medical careers. … does right make might or does might make right?” he asked.

“We must fight this mandate!” he emphasized. We can fight it most powerfully with prayer and sacrifices, and also through the courts, education and the ballot box, he said.