Actually, it never quiet leaves her home, if the scores of Nativity sets she leaves on display year round count as keeping Christ in Christmas 365 days a year.

Squires, a parishioner of St. Michael Church in Brattleboro, has collected more than 1,500 Nativity sets, and though she leaves many on display in hutches and in one bay of her detached garage, come August she begins setting up the others throughout her white clapboard home.

“It used to be a two-bedroom,” she said with a smile, explaining that those second-floor rooms are now the permanent home of part of her collection; one room holds a Nativity set of more than 200 pieces. 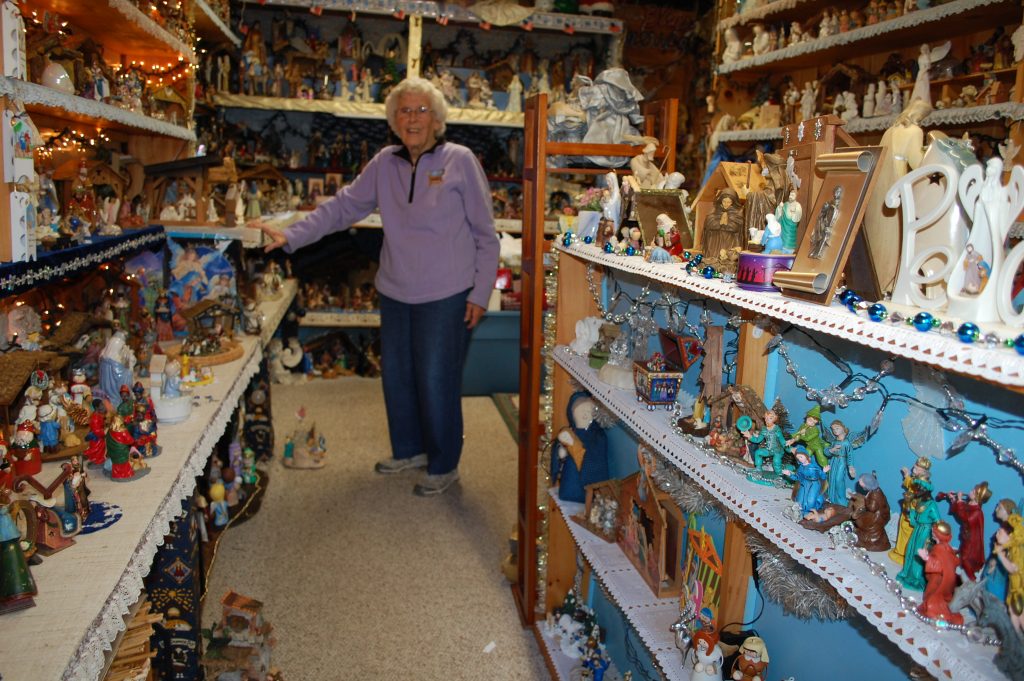 Shirley Squires of Guilford, Vt., stands near a cabinet that holds only a fraction of her Nativity set collection Oct. 23, 2019. Squires, a parishioner of St. Michael Church in Brattleboro, has collected more than 1,500 Nativity sets. (CNS photo/Cori Fugere Urban, Vermont Catholic)

She now sleeps in a daybed in the first-floor sunroom, where plenty of sunshine pours in, shimmering through glass Nativities and illuminating colorful ones that fill two shelves built in front of the windows overlooking woods and fields.

When she takes the Nativities down in that room at the end of January, she replaces them with scores of family photographs.

Members of her family have made Nativities for her — one uses photographs of family members as the faces of the angels and people in the Nativity scene. Another is made of shells.

Squires herself has crocheted or made of ceramics some of her sets.

Friends and family, children from St. Michael School in Brattleboro and even people she doesn’t know, have been giving her Nativities since she began collecting them in the early 1990s after the death of her husband and son. She had long liked Nativities and had a few sets, but collecting them at that point helped her forget the tragedies she had endured.

At least 55 countries are represented in her collection — Brazil, Italy, Peru, Ecuador, Israel, Germany, Tanzania and Switzerland, to name a few. Some Nativity sets represent different cultures, like the Amish, and some feature penguins, bears or other animals in human roles. In a couple of the scenes Joseph holds the Baby Jesus.

The Nativity sets — with anywhere from one piece to a couple hundred — range from the sophisticated and expensive, the whimsical and handmade and the tiny to the nearly life-size (the latter displayed outdoors). She has a tissue box with a Nativity design, paper gift bags, music boxes, ornaments and even a footstool with a nativity picture. Some are vintage, others new.

And they come from a variety of manufacturers such as Lladro, Jim Shore, Fontanini, Willow Tree, Avon and Belleek, and they are made of various materials including wood, ceramic, glass, wool, beeswax, paper and wire. There’s even a Lego Nativity her great grandson made, and she won a pewter one at a St. Michael’s bazaar raffle.

Although much of her collection has been given to her, she has bought some sets — some on sale, some on trips, some in increments. It’s difficult for her to pick a favorite, but the one her daughter Donna Rhodes made with photos of family members is one of them along with the large Fontanini set in an upstairs room. 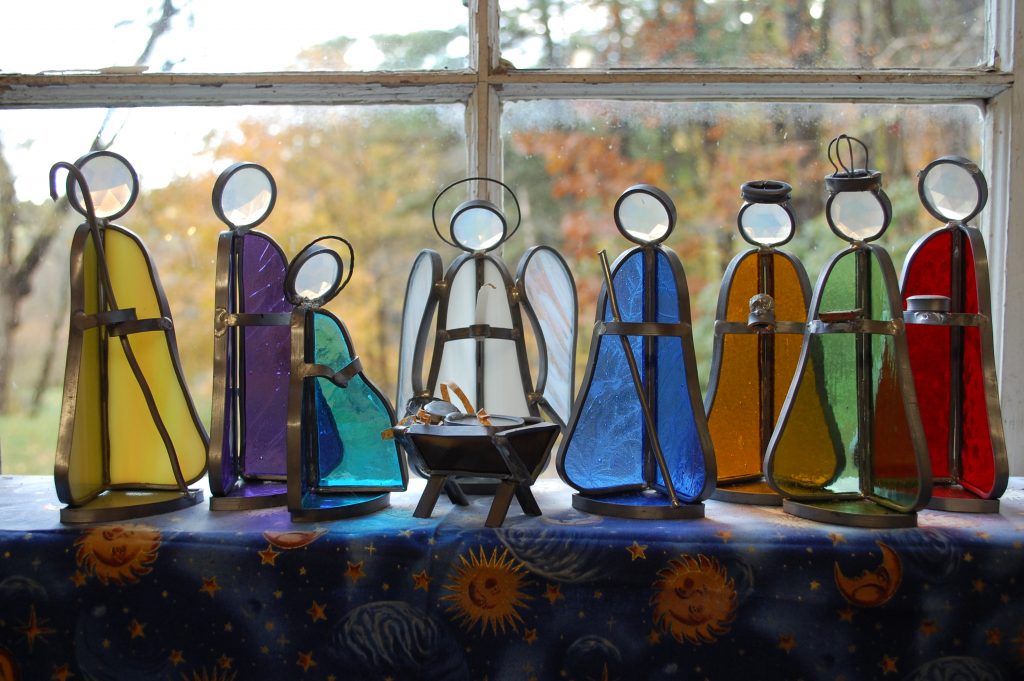 A glass Nativity set catches the sun in a display area at the home of Shirley Squires of Guilford, Vt., Oct. 23, 2019. Squires, a parishioner of St. Michael Church in Brattleboro, has collected more than 1,500 Nativity sets. (CNS photo/Cori Fugere Urban, Vermont Catholic)

From the first of December until the end of January, Squires opens her home by appointment to those who would like to see her Nativity collection, often wearing a special light purple Nativity sweatshirt. “When I see the joy on people’s faces, it makes it all worthwhile,” said the 89-year-old, who is living in the house she grew up in.

She makes friends with some of her visitors, and some have returned each year since she began displaying her collection for others to see 21 years ago; she’s only missed one year after triple bypass surgery about six years ago.

She receives nearly 300 visitors to see the Nativity sets each year.

The Nativity scenes represent is what is most important: her faith. “Looking at them keeps it in my mind that it all started with a little baby,” Jesus, she said.

“Without my faith I would not have gotten through all the struggles,” she said, pointing to a photograph of one of her grandsons and his girlfriend who died in an automobile crash. “My faith means everything to me.”

Urban is content editor/staff writer for Vermont Catholic, official publication of the Diocese of Burlington.