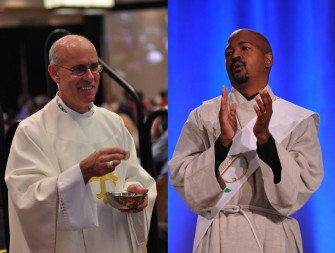 INDIANAPOLIS — Forty representatives from the Diocese of Fort Wayne-South Bend, as well as Bishop Kevin C. Rhoades, were among the 2,500 Catholics who attended the National Black Catholic Congress XI in Indianapolis July 19-22.

At the start of the congress’ opening general session, a roll call was taken of the dioceses across the country that were represented.

Deacon Mel Tardy of St. Augustine Church in South Bend attended the conference for the third time with his family, wife Annie and daughter Martell.

Deacon Tardy felt pride as the congress began and said, “They begin Congress with a roll call for each diocese, and it was great to hear a bunch of folks from our Diocese of Fort Wayne-South Bend screaming and representing our presence this year. Thanks to the diocese’s Black Catholic Day of Reflection in February and the OSV grant, we had a record attendance from our diocese of black (and white) Catholics.”

He continued, “It meant a lot to my family and others to see Bishop Rhoades and our St. Augustine pastor, (Holy Cross) Father Len Collins, attending and participating in the liturgy, and that Bishop Rhoades gathered attendees from our diocese the first day for an intimate listening session. I was also proud of our St. Augustine Gospel Choir, which sang as members of the liturgical Mass choir, and performed as the opening act for the Congress Concert.”

With the Congress’s theme of “Faith Engaged: Empower, Equip, Evangelize,” Deacon Tardy said, “We clearly ‘engaged’ our faith; through national (and international) speakers, diverse workshops, the National Black Catholic Survey, the National Pastoral Plan of Action, youth and young adult activities, an awards program and myriad opportunities to network with new friends in faith from around the world.”

Deacon Tardy said, “The witness of families or of young folks in groups praying fervently together gives you hope that God truly has not abandoned us; that as the song goes: “God is not through with us yet!”

The congress was founded in 1889, and met several times until the late 1890s. It did not meet again until 1987 in Washington and has met every five years since then.

He spoke about the early meetings of the congress in the late 19th century, and how they discussed why black Catholics should respond to racism in the broader society, in the Church and to the need for better education for their children.

“Some of those issues persist,” Father Whitt said. “Some assert themselves anew. And black Catholics must constantly and repeatedly confront them.”

He then reflected on the re-emergence of a distinctly black Catholic identity following the Second Vatican Council, especially with the U.S. black bishops issuing in 1984 the pastoral letter “What We Have Seen and Heard,” which showed that black Catholics “had come of age in the Church.”

“We were authentically black,” Father Whitt said. “We were truly Catholic. And, hence, we were called to evangelization. Thus began the current era of the Black Catholic Congress.”

Father Whitt also reflected on the fact that black Catholics are a small minority within the larger black community in the U.S., making up approximately 5 percent of the black population.

He pointed to the many blessings that blacks receive through the Catholic Church, especially in the sacraments and particularly in the Eucharist.

“The sacrifice of the Mass is the highest form of worship we can offer on earth to God,” he said. “But it’s not just us on earth. When we offer unleavened bread and wine to the Father and recall the Passion and the resurrected glory of His Son, the angels fall down in awe and the saints dance for joy and sing ‘Alleluia!’ and our beloved dead shout, ‘Thank you, Jesus!’”

Father Whitt said that some in the black community wonder why black Catholics remain in the Catholic Church. He had a quick and forceful answer to such a question.

“We are the mystical body of Christ,” he shouted. “Why stay Catholic? Why in the world would we want to be anything else?”

In speaking about contemporary issues in society that affect black Catholics, Father Whitt said that laws passed some 50 years ago to protect their civil rights “are never secure” and need vigilance to protect them.

“Nevertheless,” he said, “we must express shock and, frankly, offense that, in recognizing one right, the government tries to deny us the right to freely practice our religion in accord with its moral teachings.”

He said, “To be in a room with so many people who look like me and share the same faith was great for me. It was comforting to be surrounded by them. I realized though I’m a minority in the Church, I’m not really a minority.”

The music at Mass, provided in part by the St. Augustine Choir from South Bend, was a highlight for Summers, who said, “The Mass celebration, to me, is so much more celebratory because I’m so moved by the music. It felt like we were really praising the Lord. It felt so good.”

Witnessing the number of priests and bishops who attended the congress impressed Summers as well. “To see all the bishops and priests … the sheer number and beauty of their vestments, and smiles — they were enjoying being appreciated as much as we were enjoying having them celebrate Mass for us. The energy in the room was absolutely fantastic!”

Mary Devine-Glowaski, secretariat for Evangelization and Special Ministries in the Diocese of Fort Wayne-South Bend attended the National Black Catholic Congress and said, “The NBCC was a remarkable experience of joy, remembrance and prayer. Our hope is that this conference will be the springboard for a visible and meaningful ministry to serve our black sisters and brothers throughout the diocese.

She added, “We are in the process of forming an advisory board for this ministry and hope that those serving can help everyone in the diocese look to the particular concerns and needs of our black sisters and brothers and to call upon the abundant gifts of the African American community as we plan and serve throughout the entire diocese.”

The message Deacon Tardy brought home to the Catholics of the diocese: “We were blessed in so many ways from the congress; but we must now witness ‘What we have seen and heard’ with others throughout our diocese who were not able to attend.”