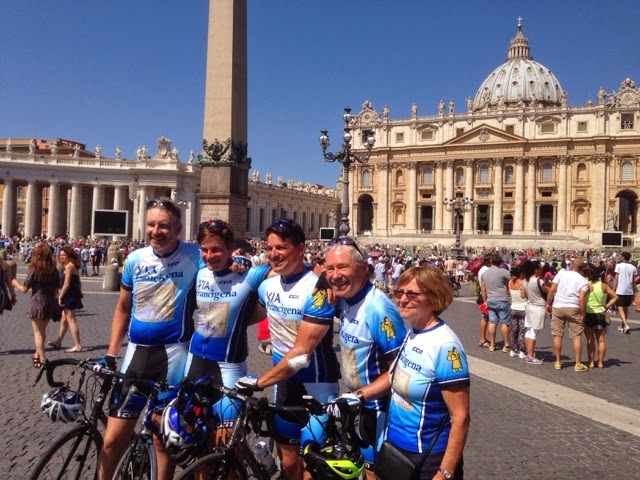 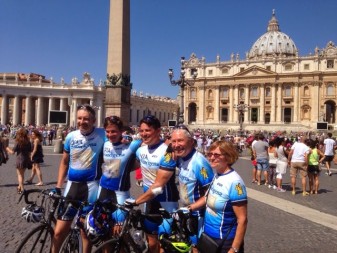 Msgr. Bill Schooler is shown in this photo with those who rode with him from start to finish after arriving at St. Peter’s Square: Brad Gregory, Giancarlo Carozza, Paolo Carozza and Janet Rivers.

GRANGER — In celebration of his 40 years of pastoral service within the Diocese of Fort Wayne-South Bend, Msgr. Bill Schooler joined several friends and family members last month to undertake the momentous challenge of bicycling through four countries in just under three weeks.

The team of pilgrims venturing with Msgr. Schooler, who serves as pastor of St. Pius X in Granger, included his brother Tony, St. Pius X parochial vicar Father Terry Coonan, and members of the Corbett, Schmid and Carozza families. While not everyone could be present for the entire duration of the trip, Giancarlo Carozza, Paolo Carozza, Brad Gregory and Monsignor’s sister, Janet Rivers, were fortunate enough to accompany him from start to finish.

Their journey began in Canterbury, as they gathered at the cathedral where St. Thomas Becket was martyred in the 12th century. Throughout the voyage, these cyclists would come to identify with saints and Biblical figures, experiencing joy, sorrow, exhilaration and exhaustion, in a much more profound way than they could have initially realized. Their first day on the trail was a rocky one. After experiencing multiple flat tires, they eventually arrived at their destination for the evening, only to learn that there was no wine available to celebrate Mass. Thankfully, other than this one unfortunate circumstance, they were able to share in the Eucharist together every other day throughout the trip.

Each morning, someone from the group would read a reflection for the day, inviting the others to ponder the similarities of their momentous excursion to the sufferings, challenges and joys of living a holy, Christian life. As they left England behind and entered into the French countryside, they were greeted with beautiful weather and gracious hospitality.

Their journey also led them to view the magnificent splendor of several legendary cathedrals, including Notre Dame of Reims, where most of the French kings throughout history have been crowned. This cathedral, as well as the even more famous Notre Dame of Chartes and Notre Dame of Paris, demonstrates the significant role the Blessed Virgin Mary plays throughout French spirituality.

As the riders continued further south, they soon entered into Switzerland, facing the challenge of climbing the Alps. Encountering both rain and snow during their uphill challenge, they steadily rose through the mountains, making it to the highest part of the San Bernardino Pass at 8,114 feet.

Once arriving at the hospice, which has been operated by wonderfully gracious and hospitable Augustinian priests and religious for over 1,000 years, the group convened for Mass. Here the pilgrims placed their emotions of triumph, exhaustion and exhilaration at the foot of the cross as they joined in worship together. This was the midpoint of the trip, and for some the last leg of the journey before returning to the United States. Before doing so, however, most of the other pilgrims arrived, and together they rested for one day to admire the beauty of God’s creation that lay before them, evident in the picturesque landscape of snow-covered mountains and lakes, which many of their group had just ascended through.

Now riding into Italy, they encountered even more small towns, friendly welcomes, delicious food and many historic churches. In Pavia, the burial site of St. Augustine, Msgr. Schooler celebrated Sunday Mass, which he revealed was his favorite place to have offered the Eucharistic Sacrifice other than the Crypt Church at St. Peter’s in Rome.

Father Coonan, the only one not to have rendezvoused with the group yet, soon arrived with all his clothes — but without his bike. The problems increased, however, because before he was able to obtain his delayed equipment from the airline, Msgr. Schooler, his brother Tony and Bill Corbett had their bicycles stolen while touring the city of Lucca.

Although they caught a group of men who appeared to be planning to steal the remaining bikes, the police did not charge anyone or provide assistance in obtaining the stolen property. In order to continue on the journey, the travelers had to purchase new bikes, and because of the delay were unable to spend much time in the beautiful city of Siena or visit St. Catherine’s tomb.

Nevertheless, three days later, after stops in Florence, Tuscany and the volcanic landscape of Lago di Balsena, the group triumphantly arrived at the Vatican for the feast of Ss. Peter and Paul. The exhilaration of seeing their destination in all its glory, as well as witnessing a papal address by Pope Francis brought joy and tears, even more so than after reaching the pinnacle of the Alps.

Sadly, however, their van, which had faithfully been driven by Janet, Maggie Schmid and Evonne and Mariel Corbett throughout the duration of the trip to provide much needed supplies, rest and renewal for the cyclists, was broken into during this time of celebration — turning their elation into great sorrow. Suitcases, laptops, passports and more were now stolen and beyond retrievable for the exhausted travelers.

The next day, Msgr. Schooler and Father Coonan were able to concelebrate Mass inside St. Peter’s at the chapel of the patron saints of Europe, Cyril and Methodius, for the feast of the First Martyrs of Rome. They reflected on the graces of their pilgrimage and on the necessity to rely on God’s mercy and love even when the world is seeking one’s destruction.

In the remaining days, these triumphant, yet now essentially penniless pilgrims were able to explore the splendid treasures and majesty of the Vatican and the Eternal City. From seeing the burial places of great saints, including those of St. Peter, St. Pius X and St. John XXIII, as well as the Sistine Chapel, the four major basilicas, the Spanish Steps, Pantheon and Coliseum, these men and women were able complete their journey and become rich through wonderful experiences and memories, even if now poor in material possessions.

To dive even more deeply into the journey taken by these adventuresome travelers, including more personal stories, humorous commentary and photos, read Msgr. Schooler’s blog at fromcanterburytorome.blogspot.com.