This Nov. 27 will be the 25th anniversary of Msgr. Michael Heintz’s ordination to the priesthood. He received the sacrament of holy orders in 1993 at St. Matthew Cathedral, South Bend, at the same time as Father Robert Van Kempen. His service to God’s people exemplifies the words of St. John Vianney, patron saint of parish priests: “A good shepherd, a pastor after God’s heart, is the greatest treasure which the good Lord can grant to a parish, and one of the most precious gifts of divine mercy.”

The son of Mike and Jude Heintz, Msgr. Heintz grew up in Elkhart, attending St. Thomas the Apostle Parish. As a student he was deeply influenced by the priests who served there at the time, in particular Msgr. William Lester, Father William Hodde, Father Donald Muldoon and Father Leonard Banas, CSC, who would assist on weekends. 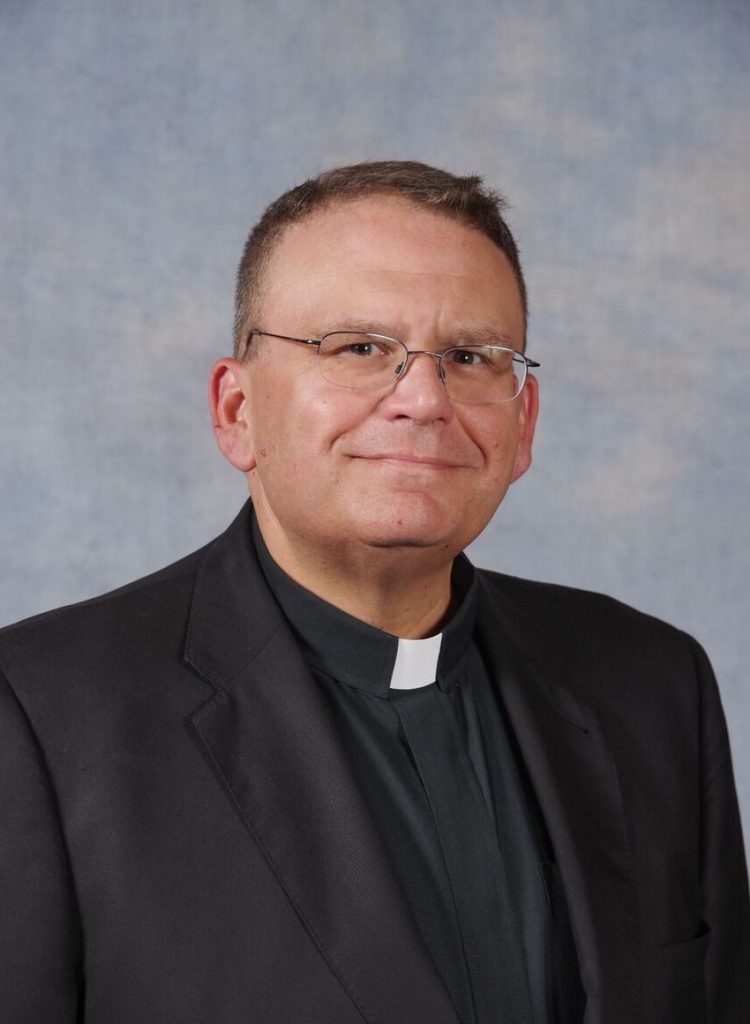 As an altar server, he recalled fondly serving Stations of the Cross and Benediction every Friday evening with Father Muldoon.

“There was something about their life that intrigued and attracted me. By worldly standards, they were not flashy or hip, but they were men of prayer and integrity, and this really drew me to be like them.”

“He was very good to me, and role model of pastoral love, energy and zeal. I found myself, a junior in high school, thinking that I might be called to priesthood — and Father Bill encouraged me greatly. I now have the privilege to assist at his parish, St Pius, when I am home in the diocese.

“Father Bob Schulte was vocation director at the time, and he was also very kind to me,” Msgr. Heintz explained. “I must also add how deeply influential Bishop (John M.) D’Arcy was upon me. He arrived in the diocese as bishop when I was a senior in high school, and I met him first when I was only 17. He has always also been a model of integrity and love for the priesthood. In an irony of divine providence, when I was a senior at Marian, I served as an usher at the vesper service at St. Matthew Cathedral prior to his installation, having no idea that I would later spend 18 very happy years there.” In 2013, Msgr. Heintz was the homilist at Bishop D’Arcy’s funeral.

He answered God’s call and applied to be a seminarian in the Diocese of Fort Wayne-South Bend, attending St. John’s Seminary in Boston, Massachusetts, as “part of a generation of priests of our diocese who trained there …. Those were happy years.” He found seminary “a great experience in which to deepen my attentiveness to God’s will and discern more intentionally.”

“Upon ordination I had hoped to be assigned somewhere in the South Bend side of the diocese,” he said. “God had other plans and I was assigned to St. Charles Borromeo Parish in Fort Wayne and as chaplain at Bishop Dwenger High School. I loved the parish and the high school and was blessed to be mentored by the late Msgr. John Suelzer, long-time pastor.

“In 1998, I got the call that Bishop D’Arcy wanted to meet with me, and I started praying that the angel of transfer would pass me by. However, he asked me to move to St. Matthew in South Bend as assistant to (auxiliary) Bishop (Daniel) Jenky, teach at Saint Joseph High School and pursue doctoral studies at Notre Dame. Moving from St. Charles was the hardest thing I had ever had to do.

“I realized the cost of obedience, and yet how through that experience of sacrifice, I was able to grow and be fruitful in new ways.”

Parishioners at St. Matthew came to know “Father Mike” as a priest who would remember their name and pray before Mass like them, kneeling in a side pew, breviary in hand — or do a charitable deed quietly without anyone noticing. He demonstrated the same life of holiness to which he preached to his parishioners.

During this season of service, Msgr. Heintz became the first doctoral graduate student who pursued and earned his theological doctorate in patristic theology on a part-time basis. He translated the homilies of Origen into English from Latin and Greek. Heintz’s dissertation, “The Pedagogy of the Soul: Origen’s Homilies on the Psalms” was then published by Catholic University of America Press as part of the “Fathers in the Church” series.

After graduation, while still pastor at St. Matthew, Msgr. Heintz accepted an appointment to direct the Notre Dame master of divinity program and served as Bishop Rhoades’ theological advisor and censor librorum.

In 2016, Msgr. Heintz accepted the work as a seminary professor — now academic dean — at Mount St. Mary’s Seminary in Emmitsburg, Maryland. He works with the seminarians from all over the country, including several from the Diocese of Fort Wayne-South Bend.

“I am so proud of them, so honored to work with them and know them, and look forward to working with them in the diocese when they’re ordained priests. I keep telling them I would happily be their associate pastor someday,” he said. “I have been privileged in that I have had — in 25 years of priesthood — only three assignments: St. Charles, St. Matthew and now Mount St. Mary’s Seminary. I have nothing but gratitude for the many graces the good Lord has given me in my 25 years as a priest. I can say I have received far more than I have been able to give.”

Father Heintz’s greatest joy as a priest, living the sacramental life with his parishioners, is reminiscent once again of St. John Vianney’s words.

“O how great is the priest! If he realized what he is he would die … God obeys him: he utters a few words and the Lord descends from Heaven at his voice, to be contained within a small host. Without the Sacrament of Holy Orders, we would not have the Lord. Who put him there in the tabernacle? The priest. Who welcomed your soul at the beginning of life? The priest. Who feeds your soul and gives it strength for the journey? The priest. Who will prepare it to appear before God, bathing it one last time in the blood of Jesus Christ? The priest — always the priest. And if the soul should happen to die (as a result of sin) who will raise it up, who will restore its calm and peace? Again the priest. After God, the priest is everything. Only in heaven will he fully realize what he is.”

Elaborating on the fruit of following God’s call to the priestly vocation, Msgr. Heintz said: “I think living the rhythms of the liturgical year, the cycle of feasts, seasons, the lectionary readings, and — after 25 years — I have become quite comfortable with them in a way that allows me to pray the Mass so well. I know the readings and have gained ever-deeper insights into what is revealed in Christ, as well as a great deal of comfortability with the rites so that I can actually pray them and not merely fuss and fret about the rubrics.

“I think another great joy has always been teaching the faith — whether in grade school, high school, university or seminary. The Sacred Triduum every year at St. Matt’s became very dear to me, as well as first penance and first holy Communion. Serving for nearly 20 years in one parish allows one to become part of the fabric of peoples’ lives in such a beautiful way. There are children I have baptized — one of whom I baptized at St. Charles and who is now a seminarian at the Mount, another to whom I gave first Communion at St. Matt’s who is a seminarian for our diocese at Bishop Bruté. … I will witness the marriage in August of a couple whom I knew as preschoolers at St. Matt’s. What a blessing for me!” Msgr. Heintz shared.

In his next 25 years as a priest, he desires to continue to serve faithfully and with integrity wherever he is asked to go.

“I look forward to returning to the diocese and serving somewhere as pastor, living the joys of parish life, and until then, I have the joy of working with amazing colleagues here at the seminary and the future priests of our diocese.”