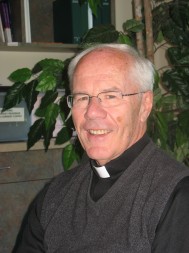 FORT WAYNE — Retirement can be an adjustment. For Msgr. John Kuzmich, it would seem going from a parish of more than 3,000 families with 10,000 people — the largest in the Diocese of Fort Wayne-South Bend — to one of the smallest parishes with about 160 families with less than 400 parishioners could be a major adjustment.

On Wednesday, June 26, Msgr. Kuzmich will conclude his priestly ministry at St. Vincent de Paul Parish, Fort Wayne, where he has served as pastor one month short of 29 years and spent seven prior years as associate pastor, and, literally, drive into retirement with residence at Sacred Heart of Jesus Parish, Lakeville, on U.S. 31. He’ll go from the activity of six weekend Masses, Baptisms, religious-education and an evening Life Teen program to just two Masses on the weekend.

“The heavy Mass schedule was very tiring for me,” said Msgr. Kuzmich, who has undergone two invasive surgeries during the past 12 years. “I’ll be grateful for the quiet weekends with no administrative responsibilities,” he said.

Born in South Bend on Oct. 1, 1938, he is one of four children of Croatian parents Hubert and Katherine (Vukovich) Kuzmich. He has a brother, Hugh, and sisters Kathern (Kagel) and Nancy (Hillenbrand), all living in Indiana, two in South Bend. Young John attended St. Patrick Grade School and Saint Joseph High School. He spent a year and one summer semester at the University of Notre Dame with the intention of obtaining a degree in architecture, but a call to the priesthood superseded that intention.

“I just knew it was not for me. The call was very clear,” Msgr. Kuzmich said. “I always had a great respect and love for the Church, and began attending Mass more frequently during the week.” He added that he came from a good Catholic and close-knit family life, learning his work ethic from his parents who owned a small, neighborhood grocery. Priests often were invited for dinner at their home.

Following studies at Our Lady of the Lake Seminary, Wawasee, for a year-and-a-half and six years at Mount Saint Mary’s of the West Seminary, Norwood, Ohio, near Cincinnati, he was ordained to the Priesthood on May 29, 1965, by Bishop Leo A. Pursley at St. Matthew Cathedral, South Bend. He was assigned as an associate pastor at the Cathedral of the Immaculate Conception, Fort Wayne, and three years later appointed master of ceremonies for the Fort Wayne Deanery. He also taught at nearby Central Catholic High School.

“Those were very challenging times following Vatican II,” said Msgr. Kuzmich, who was trained to say Mass in Latin and was taught some courses in the ancient language. “So many things were changing with documents coming out on how to administer the sacraments. We had to involve the laity and try to communicate to the people what the reforms were all about. They should canonize the whole lot of us,” he quipped.

In March 1969, Father Kuzmich returned to St. Matthew Cathedral as associate pastor where he served for about 16 months. In July 1970, he was assigned to St. Vincent de Paul Parish, Fort Wayne, as associate pastor, which included a short time as administrator following the death of Father Lawrence Fettig, pastor, in 1974. “Little did I know St. Vincent’s would be such a big part of my life,” he said.

In July 1977 he was named rector of the Cathedral of the Immaculate Conception and served briefly as vice chancellor of the diocese. In fact, on a couple of occasions when Bishop William E. McManus experienced health episodes involving his heart, he was told, “John, you’re in charge of the diocese!”

During his time as rector, the Cathedral Square grounds were beautified with new landscaping and parking space was increased by razing the former Providence Convent and custodian’s residence. In the cathedral, the portable altar was replaced with a new wooden one and choir stalls were removed to create more sanctuary space. The Cathedral Grade School was closed, renaming it Cathedral Center after renovating it for meeting, educational and office use. In 1980, a museum of Church-related artifacts and history was established there.

In July 1984, Father Kuzmich was appointed pastor of St. Vincent de Paul Church, consisting of about 1,500 families at the time and a large debt. After he initiated a fund drive to successfully remove the debt, he set about working with the laity, administering the sacraments, celebrating Mass and preparing homilies, things he takes very seriously as a priest. “If I knew something was happening on the property I felt I should be there,” he said. In 2009, he received the title of monsignor.

Eventually, something big did begin happening on a piece of property purchased by the parish allowing Msgr. Kuzmich to utilize his architectural interests in the construction of a new church to accommodate the increasing congregation, which today is double the size it was when he assumed pastorship.

“Building the church was exciting,” said Msgr. Kuzmich. “It was a three-year challenge involving so many meetings and change orders we wondered if we were ever going to get it off the ground!” The new church was dedicated on June 10, 2001.

Currently, construction has resumed on the parish grounds for a new Youth and Adult Life Center to be completed before Thanksgiving. “It’s my last hurrah, so to speak, but I won’t see it completed and won’t be here to enjoy it,” he mused.

His time at the 167-year-old parish has been “very satisfying” he said reflecting on the growth of the worshipping community, initially involving the Christ Renews His Parish program, some 40 Small Church Community groups currently and the ReKindle the Fire initiative, which now includes diocesan-wide conferences for both men and women. A strong stewardship program has enabled the parish to adopt Immaculate Conception Parish in Honduras and build chapels there as well as help support three parishes in our local diocese.

“I’m proud of St. Vincent’s,” Msgr. Kuzmich said. “It’s a wonderful parish with wonderful people. When I’m in my car driving away from here the last time it will be with mixed emotions. I may be singing a few songs, but it will be hard to let go of this place!”

Celebrating his last Mass with the school children on June 3, Msgr. Kuzmich asked the kindergarten students what it means to retire. A little girl answered, “You just sit and watch a lot of TV.”

“I will watch some TV,” he admitted. “I enjoy the news, documentaries and old movies. I will continue to take good care of my health, eating more nutritiously, getting exercise, especially swimming, and do some reading,” he continued. “Maybe I’ll do some volunteer work, see what’s available, but just quiet down. I have yet to jump into technology; in fact, I’ve resisted it,” he stressed. “It’s another sign from God saying, ‘John, retire!’”