NEW YORK (CNS) — “Miss Bala” (Columbia), director Catherine Hardwicke’s remake of a well-received 2011 Spanish-language film, is meant to be the tale of an ordinary woman discovering her inner toughness when placed in extraordinary circumstances.

But those in search of something more than the climactic spectacle of Gina Rodriguez in an evening dress toting a high-powered rifle will come away disappointed.

Rodriguez plays initially mild-mannered, somewhat put-upon Los Angeles makeup artist Gloria. While Gloria is visiting her best friend, Suzu (Cristina Rodlo), in Tijuana, the two go out to a nightclub where they witness the attempted assassination of a local official. 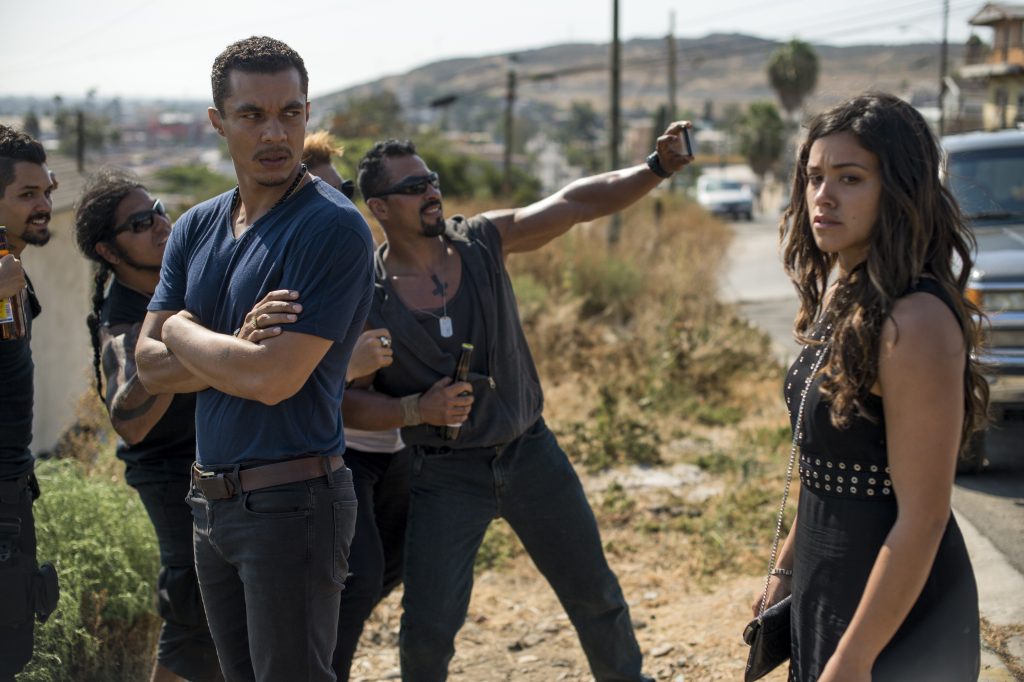 In the chaos that follows, Suzu disappears. But when Gloria turns to the police for help finding Suzu, and offers to identify the culprits in the failed rubout, she discovers that the officer to whom she has entrusted herself is in the pay of the powerful drug cartel behind the hit. The leader of this gang, Lino (Ismael Cruz Cordova), promptly arranges for Gloria’s abduction.

After Lino blackmails Gloria into playing an unwitting role in the bombing of a DEA safehouse, she makes a break for it but winds up being kidnapped again, this time by DEA agent Brian (Matt Lauria). Brian threatens to send Gloria off to the penitentiary for decades unless she helps him catch Lino. Clearly, this girl can’t get a break.

Improbabilities abound along Gloria’s odyssey. And there’s little of note going on during her journey beyond a complex and charismatic performance from Cordova, who manages to make the Gloria’s in-spite-of-herself connection with Lino seem somewhat believable.

Gareth Dunnet-Alcocer’s script tries to give Lino some humanity and depth. So it’s in character when he abandons a plan to compel Gloria to have sex with him (the two are interrupted at the moment of truth) and instead contents himself with caressing her hand while lying next to her in bed.

Though rampant corruption leads to a muddying of the moral waters — it’s hard to tell the good guys from the bad — the mayhem on screen is mostly bloodless, and the sexuality, as typified when handholding replaces rape, restrained. That makes “Miss Bala” acceptable for a wide swath of grownups.

The film contains considerable stylized violence, including gunplay and explosions, with only slight gore, a narcotics theme, some sensuality, brief partial nudity, at least one mild oath, a couple of rough terms and several crude expressions. The Catholic News Service classification is A-III — adults. The Motion Picture Association of America rating is PG-13.

The Kid Who Would Be King

NEW YORK (CNS) — The Arthurian legend gets an inventive updating in “The Kid Who Would Be King” (Fox), a thrilling adventure that casts schoolchildren as latter-day Knights of the Round Table, destined to save the world. 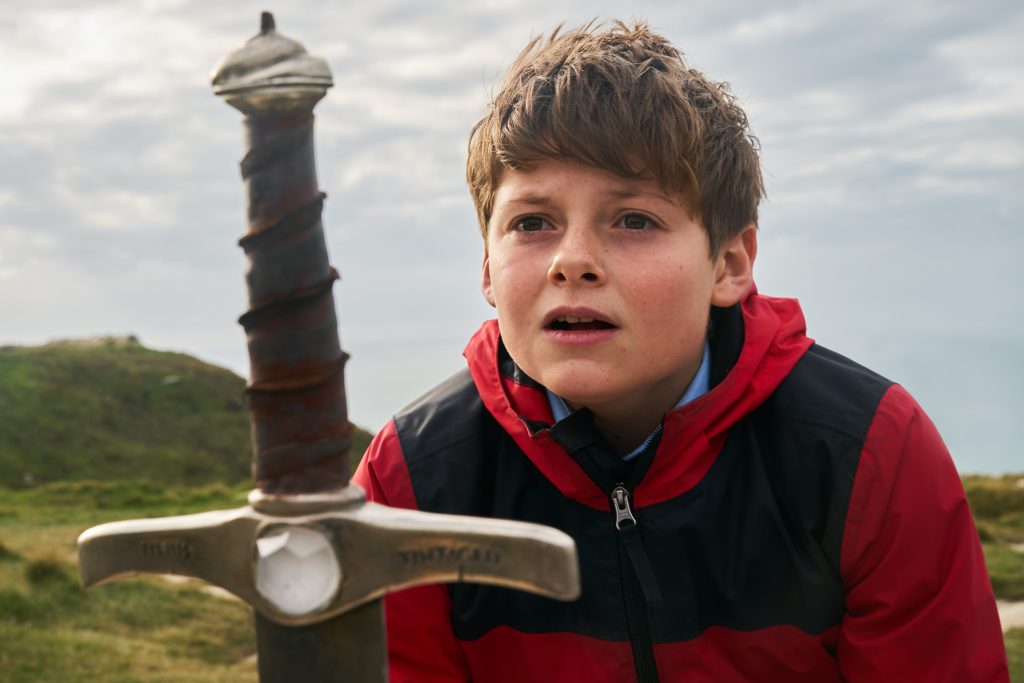 Louis Ashbourne Serkis stars in a scene from the movie “The Kid Who Would Be King.” The Catholic News Service classification is A-II  adults and adolescents. The Motion Picture Association of America rating is PG — parental guidance suggested. Some material may not be suitable for children. (CNS photo/Fox)

Borrowing heavily from the Harry Potter canon, with a dash of J.R.R. Tolkien and Disney’s “The Sword in the Stone” (1963) thrown in, writer-director Joe Cornish serves up that treasured Hollywood rarity: an entertaining, family-friendly film that skillfully blends in strong messages — in this case, about truth, justice and caring for others.

Not to be confused with the 1975 Kipling adaptation “The Man Who Would Be King,” this movie is set in modern-day Britain. It’s a land wracked by divisions, anxiety and political uncertainty (Brexit, anyone)?

Twelve-year-old Alex (Louis Ashbourne Serkis) has but one goal: to get through the school day without himself or his nerdy best friend, Bedders (Dean Chaumoo), being bullied by classmates. No such luck: after Alex stands up to two toughs, Lance (Tom Taylor) and Kaye (Rhianna Dorris), they give chase, determined to humiliate him.

Alex escapes through a hole in the fence surrounding a building site. There he’s amazed to find a shiny sword sticking up in a pile of rubble. He grasps the handle and pulls out the blade, unaware that the mythical Excalibur is now in his grasp, making him the new “king.”

Fabled wizard Merlin promptly arrives, a shape-shifter played alternatively as a fellow schoolboy (Angus Imrie) and a grizzled old man (Patrick Stewart). Merlin warns Alex that his success with the storied weapon has awakened the wicked enchantress Morgana le Fay (Rebecca Ferguson) in her subterranean lair — where she was imprisoned eons ago by her half-brother, King Arthur.

In a mere four days, a solar eclipse will offer Morgana the chance to re-enter the world of the living. Alex has little time to assume the crown, recruit knights and raise an army.

Destiny will not be ignored, however, and under Merlin’s tutelage Alex begins by enlisting Bedders. He also reconciles with his enemies, hoping to benefit from Lance and Kaye’s brawn as well as their popularity. It’s no surprise that the names of the new band turn out to correspond to those of Arthur’s knights: Lance is Sir Lancelot, Kaye is Sir Kay, and Bedders is Sir Bedivere.

Our company of misfits embarks on an epic quest that takes them from London to Stonehenge and on to Arthur’s birthplace, the coastal village of Tintagel in Cornwall. Then it’s back to school where they must convince the entire student body to don armor and join the battle against Morgana’s zombie warriors (whose appearance may frighten younger viewers).

“If we fight together, evil doesn’t stand a chance,” Alex declares, validating Merlin’s observation that “there is an old soul in every child.”

The film contains potentially scary fantasy violence and two mild oaths. The Catholic News Service classification is A-II — adults and adolescents. The Motion Picture Association of America rating is PG — parental guidance suggested. Some material may not be suitable for children.

NEW YORK (CNS) — Long on eerie atmosphere but wanting in coherence, director M. Night Shyamalan’s thriller reunites characters from two of his previous films, 2000’s “Unbreakable” and “Split” from 2016, for a prolonged meditation on the possible real-life existence of superheroes. Firmly opposed to the idea is a therapist (Sarah Paulson) who claims to specialize in treating those with delusions of DC or Marvel-style grandeur. She gets the opportunity to try to convince a security expert who moonlights as a vigilante (Bruce Willis) and a schizophrenic murderer (James McAvoy) that they are merely human when they join a former comic-book gallery owner, rare disease victim and true believer in extraordinary capabilities (Samuel L. Jackson) under confinement at the asylum where she works. Many of the grown-ups for whom the movie is acceptable will find the debate on which it hinges pointless while they will also likely be put off by the bloodletting in which it briefly indulges. Much violence with considerable gore, including an off-screen act of cannibalism, a few gruesome images, a couple of uses of profanity, occasional crude language, an obscene gesture. The Catholic News Service classification is A-III -— adults. The Motion Picture Association of America rating is PG-13 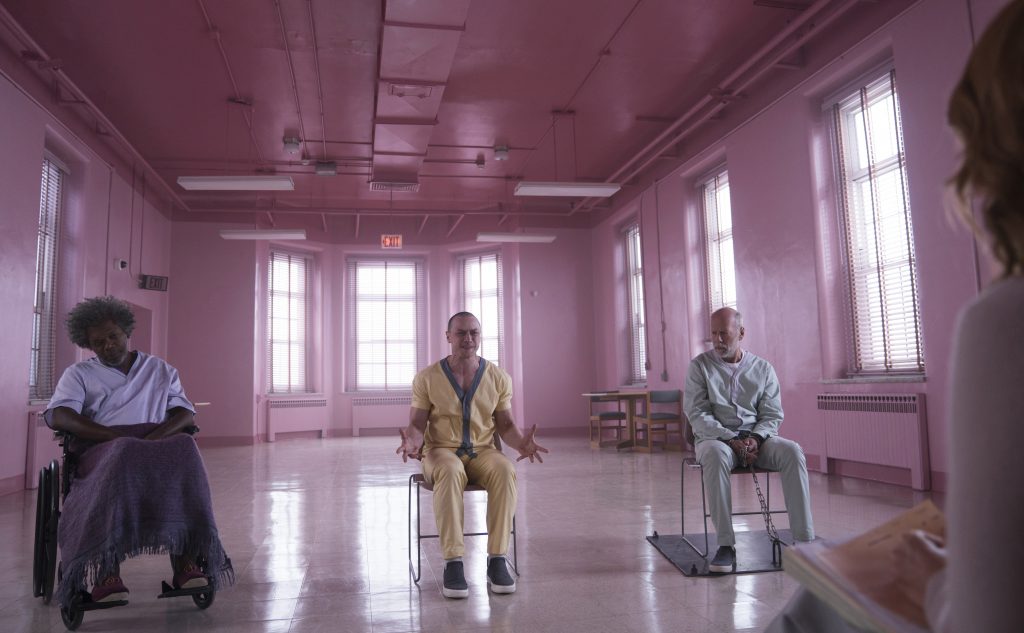 Samuel L. Jackson, James McAvoy, Bruce Willis and Sarah Paulson star in a scene from the movie “Glass.” The Catholic News Service classification is A-III — adults. The Motion Picture Association of America rating is PG-13 — parents strongly cautioned. Some material may be inappropriate for children under 13. (CNS photo/Universal Studios)