NEW YORK (CNS) — It’s all hands on deck in the vivid fact-based naval epic “Midway” (Lionsgate). In fact, the cast of this historical drama is so crowded that viewers might feel the occasional roll call was in order.

The film recounts the period from the Japanese attack on Pearl Harbor, Hawaii, on Dec. 7, 1941, to the Navy’s decisive victory in the battle of the title in June 1942. Indeed, so overwhelming was the triumph at Midway that it turned the tide in the Pacific Theater of World War II.

As the movie demonstrates, military personnel at all levels contributed to this success. Among the top brass, Adms. Chester W. Nimitz (Woody Harrelson) and William “Bull” Halsey (Dennis Quaid) collaborated to outfox their most gifted counterpart, Isoroku Yamamoto (Etsushi Toyokawa), the architect of the Pearl Harbor operation.

They were aided by the work of Lt. Cmdr. Edwin Layton (Patrick Wilson), a brilliant intelligence officer who correctly surmised that the Japanese were intent on mounting an assault on Midway Island and thus enabled American forces to get the drop on them. Layton’s most significant subordinate was eccentric codebreaker Joseph Rochefort (Brennan Brown). 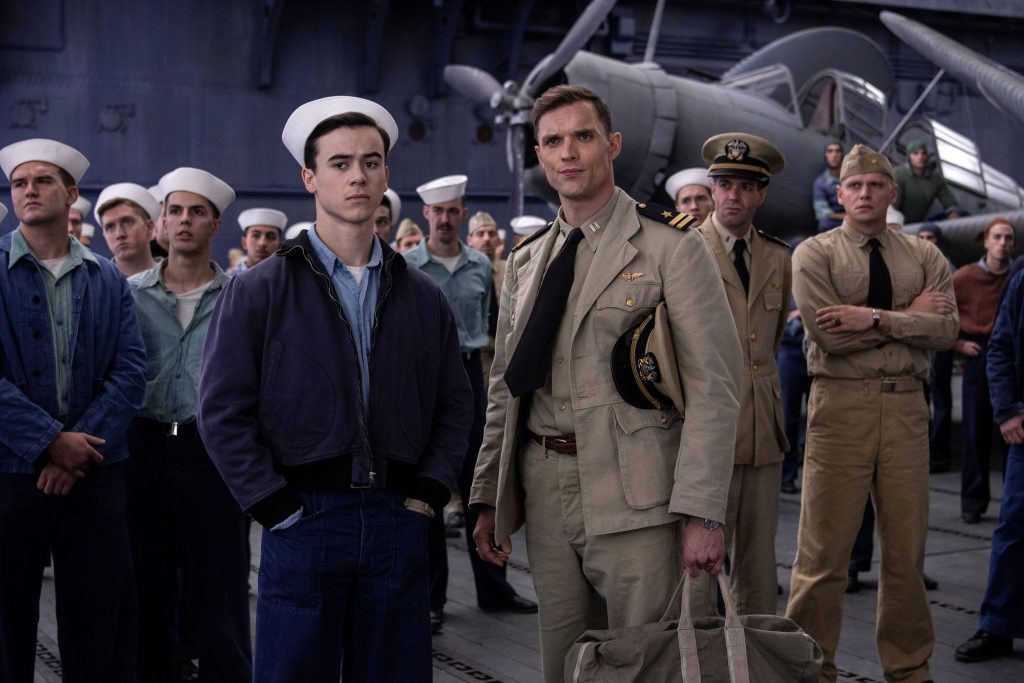 Keean Johnson and Ed Skrein star in a scene from the movie “Midway.” The Catholic News Service classification is A-III — adults. The Motion Picture Association of America rating is PG-13 — parents strongly cautioned. Some material may be inappropriate for children under 13. (CNS photo/Lionsgate)

Another figure who helped to lay the groundwork for the outcome was Lt. Col. Jimmy Doolittle (Aaron Eckhart). His famous air raid on Tokyo in April 1942 was a major propaganda coup for the Allies. It also contributed to a shift in Japanese strategy.

Convinced that the U.S. aircraft carrier fleet, which had escaped damage at Pearl Harbor, must now be dealt with to prevent another raid like Doolittle’s, the Japanese commanders decided to lure it into a trap at Midway. Instead, thanks to Layton, the carriers were waiting for the Japanese and succeeded in snaring them.

As for those who actually fought the battle, they’re represented here primarily by two daring pilots, squadron commanders Dick Best (Ed Skrein) and Wade McClusky (Luke Evans). While on shore, Dick benefits from the support of his loving wife, Ann (Mandy Moore), who argues against the self-doubts that trouble him.

As this partial list of characters suggests, director Roland Emmerich has a lot of personal storylines to keep bound together — with the result that the details of his film are sometimes confusing. But there’s a good balance in Wes Tooke’s script between action scenes and human interest. The patriotism, courage and tenacity on display, moreover, go a long way to maintain attention.

Predictably, a lot of realistic sailors’ talk is worked into the dialogue. In particular, the servicemen have a habit of impugning the marital status of their adversaries’ parents.

Still, given the excellent history lesson on offer in “Midway,” at least some parents may consider it acceptable for older teens. All the more so since the mayhem of war — though its dangers are effectively brought home to viewers — is nonetheless portrayed in a restrained way.

The film contains frequent stylized violence with little gore, brief gruesome images of a burned corpse, about 10 uses of profanity, an equal number of milder oaths, at least one rough term and considerable crude and crass language. The Catholic News Service classification is A-III — adults. The Motion Picture Association of America rating is PG-13 —parents strongly cautioned. Some material may be inappropriate for children under 13.

Mulderig is on the staff of Catholic News Service.