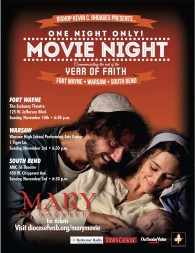 SAN FRANCISCO — Mary, the Mother of Jesus Christ is revered throughout the world. However, her amazing life has not been featured on the big screen — until now.

Ignatius Press released “Mary of Nazareth,” a major motion picture on the life of Our Blessed Mother, for sponsored theatrical screenings across the country.

Bishop Kevin C. Rhoades, as part of the Year of Faith, has brought the show to the Diocese of Fort Wayne-South Bend at the three following locations:

Tickets are available at www.diocesefwsb.org/marymovie.

“Mary of Nazareth” vividly captures the essence of Mary’s profound faith and trust in God amidst the great mysteries that she lived with as the mother of the Messiah, her compassionate humanity and concern for others, and the deep love that she and Jesus shared for one another. This movie underscores her special role in God’s plan for our redemption, her unique relationship with Christ and the tremendous suffering that she endured in union with His Passion and Death, as well as her serene joy at His Resurrection.

Filmed in Europe, this major new epic film on the life of Mary is the first full-length feature movie on the story of this incredible woman to be shown in theaters. It was filmed in English in high definition.

Pope Emeritus Benedict XVI screened the movie in the Apostolic Palace in 2012, and was touched by the portrayal of Mary so movingly revealed on film. He commented that “it is not easy to characterize the figure of any mother, because the riches of the maternal life are difficult to describe, but this is even more challenging when it comes to the Mary of Nazareth, who is the mother of Jesus, the Son of God made man.”

This movie is not suitable for very young children. Although it is not rated, it would probably rate as PG. Parental guidance is advised. The diocese would not advise viewing for children younger than pre-teens (11 and 12) and teens, but even so, parents should be aware that there are some scenes that might be too intense for their children, such as the murder of the innocents by King Herod as well as the crucifixion scenes.

An exclusive trailer of the film is available online now at www.MaryFilm.com.