MAYFIELD, Ky. (CNS) — Mourning, prayer and a resolve to rebuild shattered lives, homes and businesses in Mayfield followed one of the most powerful twisters in U.S. history that leveled the city of 10,000 in western Kentucky overnight Dec. 10.

The Bluegrass State was the worst hit as numerous devastating tornadoes traveled across it and its neighboring states of Illinois, Tennessee, Arkansas and Missouri, leveling entire communities.

As of early Dec. 13, at least 34 people confirmed dead but rescue efforts were still underway in Mayfield and elsewhere. Twenty of those awho perished were in Kentucky, and six died when a roof collapsed at an Amazon warehouse in Illinois. 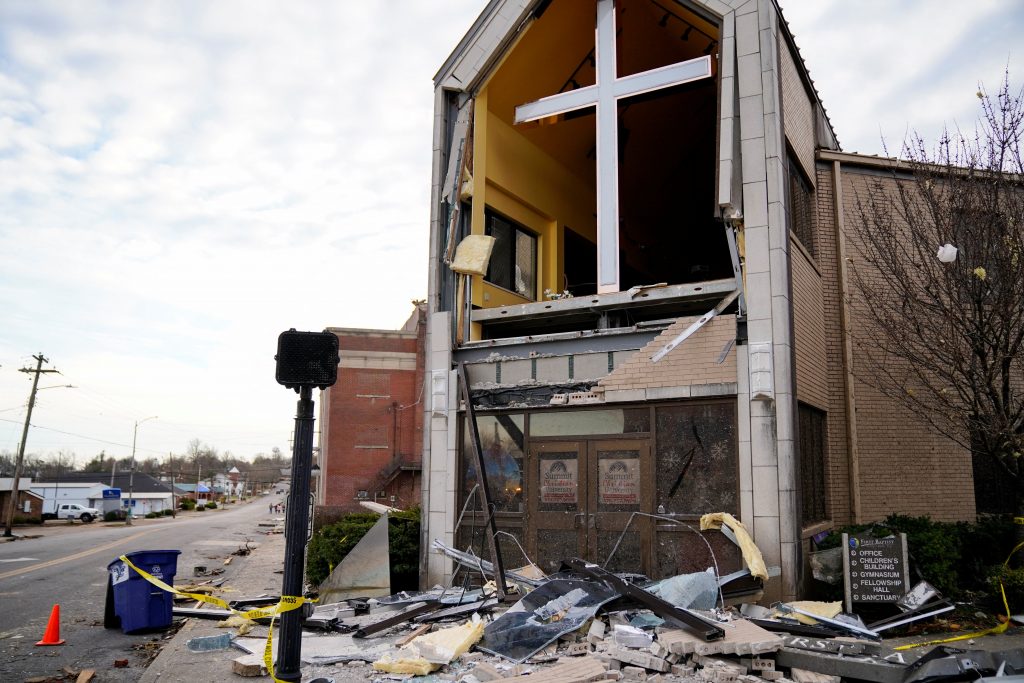 Debris surrounds a badly damaged church in Mayfield, Ky., Dec. 11, 2021, after a devastating tornado ripped through the town. More than 30 tornadoes were reported across six states late Dec. 10, and early Dec. 11, killing dozens of people and leaving a trail of devastation. (CNS photo/Cheney Orr, Reuters)

As members of two of Mayfield’s faith congregations came together to pray Dec. 12 amid rubble — piles of brick, metal and glass — prayers for their city and all of those affected by the ferocious mid-December twisters came from far and wide, including from Pope Francis and the U.S. Catholic bishops, and from close to home — Bishop William F. Medley of Owensboro, whose diocese covers western Kentucky.

A papal telegram conveyed by Cardinal Pietro Parolin, Vatican secretary of state, said Pope Francis “was saddened to learn of the devastating impact of the tornadoes” in the Midwest and the South.

“He offers heartfelt prayers that almighty God will grant eternal peace to those who have died, comfort to those who mourn their loss, and strength to all those affected by this immense tragedy,” it said.

“With gratitude for the tireless efforts of the rescue workers and all engaged in caring for the injured, the grieving families and those left homeless, Pope Francis invokes upon all engaged in the massive work of relief and rebuilding the Lord’s gifts of strength and generous perseverance in the service of their brothers and sisters,” said the telegram, which Cardinal Parolin sent to Archbishop Christophe Pierre, the apostolic nuncio in the U.S.

Archbishop José H. Gomez of Los Angeles, president of the U.S. Conference of Catholic Bishops, and Archbishop Paul S. Coakley of Oklahoma City, chairman of the USCCB’s Committee on Domestic Justice and Human Development, said the destruction and devastation was “heartbreaking” and called for prayer and assistance for all those who were in the path of the storms.

“We also pray for the emergency responders and those who have begun the work of providing for the needs of the impacted in these communities in the recovery efforts,” they said in a statement issued late Dec. 11. “We entrust all our brothers and sisters in harm’s way to our Blessed Mother, and we ask for her continued protection and for her intercession in comforting those who are suffering.”

The two prelates urged Catholics and all people of goodwill to donate to recovery efforts and financial help for tornado victims by supporting the work of Catholic Charities USA: https://www.catholiccharities.us/campaign/ccusa-disaster-relief/c353051. 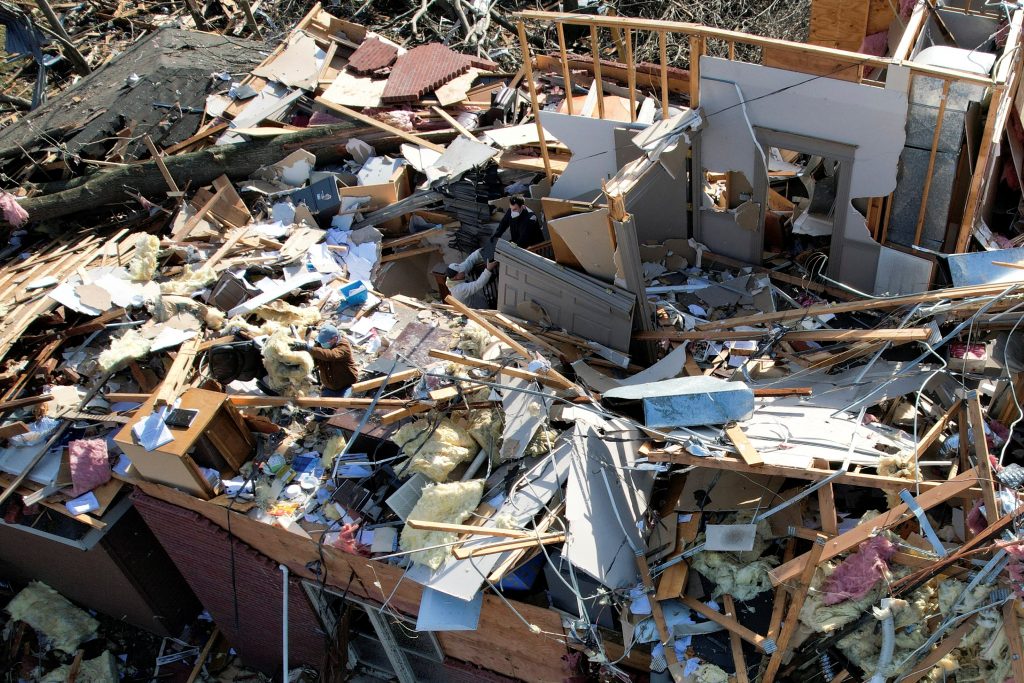 A photo taken with a drone shows people working inside a destroyed home in Mayfield, Ky., Dec. 11, 2021, after a devastating tornado ripped through the town. More than 30 tornadoes were reported across six states late Dec. 10, and early Dec. 11, killing dozens of people and leaving a trail of devastation. (CNS photo/Cheney Orr, Reuters)

Bishop Medley in a Dec. 11 statement called on the Catholic community of the diocese “to unite in prayer … for all of the suffering that was caused by this disaster.” He asked all parishes to take up a special collection over the Dec. 11-12 weekend to aid tornado victims.

The bishop also took note of the leveling of Mayfield’s candle factory, where 110 employees were working around the clock, which is customary during the Christmas season, according to news reports.

Initially, city officials feared the death toll among factory workers would reach 70. Late Dec. 12, a company representative told reporters that eight workers were confirmed dead and eight remained missing, but the rest had been accounted for.

“Many of those injured in the Mayfield candle factory were parishioners, and others represented migrants and the marginalized in our communities,” Bishop Medley said in his statement.

He added that through its Catholic Charities office, the diocese planned “to offer immediate help and services” for those displaced by the tornado and/or need immediate emergency financial help.

“I am proud of the many ways that your generosity always allows the Catholic Church to respond to the suffering and to families in crisis,” Bishop Medley said. “So I thank you in advance for your generous response to this terrible devastation. God will bless our generosity.” 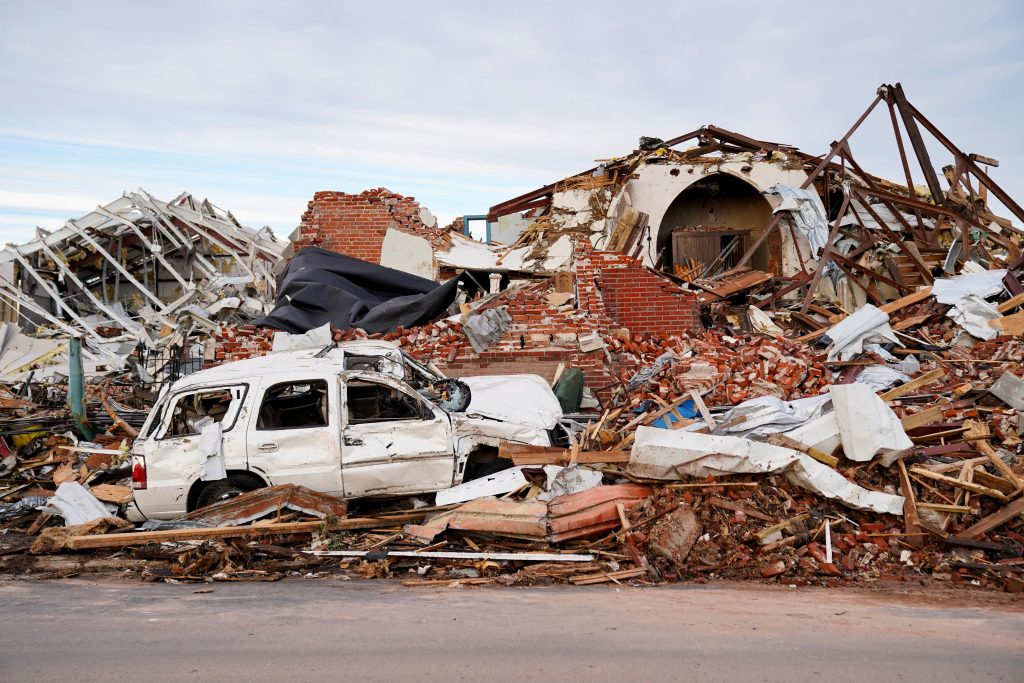 Debris surrounds a destroyed home in Mayfield, Ky., Dec. 11, 2021, after a devastating tornado ripped through the town. More than 30 tornadoes were reported across six states late Dec. 10, and early Dec. 11, killing dozens of people and leaving a trail of devastation. (CNS photo/Cheney Orr, Reuters)

In a Dec. 12 tweet, Bishop Medley said he visited the Catholic community of St. Joseph Church in Mayfield: “Fr. Eric Riley, the pastor, preached on the Advent and Our Lady of Guadalupe themes of hope and joy. Neighboring parish St. Jerome of Fancy Farm welcomed them.”

At a news briefing Dec. 12 in Mayfield, Kentucky Gov. Andy Beshear noted one tornado traveled 227 miles. “It didn’t take a roof, which is what we’ve seen in the past. It exploded the whole house. People, animals … just gone.”

“The very first thing that we have to do is grieve together,” he said, “and we’re going to do that before we rebuild together.”