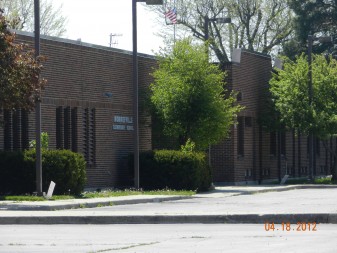 NEW HAVEN — The East Allen County Schools (EACS) Board of Trustees at the public meeting on April 17 unanimously voted to approve the sale of Monroeville Elementary School to the Diocese of Fort Wayne-South Bend on behalf of St. Rose of Lima Church, Monroeville.

St. Rose of Lima Church through the Diocese of Fort Wayne-South Bend had submitted a purchase offer of $189,000 that met the initial price required by the East Allen County Schools’ school board.

“The way is now paved for the St. Joseph School (SJS) to look forward to start their classes in the fall of 2012, the centenary year of SJS, in the new facility,” Father Lourdino Fernandes, pastor of St. Rose of Lima Parish, reported in an email message to Today’s Catholic.

“This was the ‘Dream Centenary Project’ adopted by St. Joseph Centennial Committee and bravely embraced by the parishioners of St. Rose of Lima,” he added.

St. Joseph School (SJS) in Monroeville is celebrating 100 years of excellence in Catholic education this year.

“The acquisition of a new building for St. Joseph’s in Monroeville could not be more timely,” said Dr. Mark Myers, superintendent of Catholic Schools for the Diocese of Fort Wayne-South Bend.

He added, “The continuation of an active Catholic school will be a great benefit for the entire community of Monroeville.”

Psalm 118, “This is the day the Lord has made. Let us rejoice and be glad in it,” has been St. Joseph School Principal Carolyn Kirkendall’s motto throughout centenary celebration. Now the retiring principal is moved beyond words as the purchase of a larger, updated building will make history for the school she has served for over a quarter of a century.

“I truly believe the power of prayer has made this moment possible,” Kirkendall said.

“Hallelujah, our prayers have been answered,” she added.

To mark the historical event, Father Lourdino declared Thursday, April 19, a day of celebration for the St. Joseph School students.

Kirkendall, along with the seventh- and eighth-grade students planned out the details of the day, which began with Holy Mass.

“We have had prayers of petition for many months, now it is time for prayers of thanksgiving,” Kirkendall shared.

“The parishioners were determined to look forward to building a confident future for SJS — one that would ensure that all their children had access to Catholic education of the highest quality,” Father Fernandes said.

“The SJS Centenary Committee resolved that a fitting tribute to the SJS Centenary accomplishments would be to commit themselves to restore and preserve and take forward the rich legacy of SJS and make St. Joseph School a beacon of excellence in Catholic education for generations of students for the next 100 years,” Father Fernandes said.

The committee felt the purchase of the Monroeville Elementary School would help St. Joseph School have appropriate facilities conducive to good education.

“They strongly believed that ‘nothing would be more worthy of contribution and improvement than the means to encourage our children to achieve full development as creative, intellectual beings for the satisfaction of their own and mankind’s aspirations,’” Father Fernandes said. “The first step in a long journey has been accomplished. The long vigil is now ended. The real work begins.”

Members of the parish, school and project campaign have had a prayerful and patient wait.

In November of 2011, Dennis Castleman, whose three daughters attend St. Joseph School, was part of the original walk-through group of the Monroeville School building with Father Lourdino.

Months and hundreds of thousands of pledge dollars later, he and several others nervously sat at the EACS board meeting hoping their bid would be accepted and their dream become a reality.

Members of the committee prayed outside of the EACS administration building prior to the meeting on April 17. Then they joined back at the school grounds to ring the church bells and join again for prayers of thanksgiving and praise.

Castleman admitted, “We were all very relieved when the sale finally came up on the agenda and was approved. It will be a lot of work, but well worth it.”

Superintendent Myers said, “We could not be more pleased to see the faith-filled parishioners at St. Rose of Lima plan well for the next century of Catholic education. The children prayed daily for the intercession of St. Joseph in order to fulfill this goal to acquire the building.”

Tim Johnson contributed to this story.