RABAT, Morocco (CNS) — The Christian mission is not about numbers of converts, but about changing people and the world by being witnesses of God’s mercy and love, Pope Francis told missionaries in Morocco.

“Christians are a small minority in this country,” much less than 1 percent, but the pope said, “to my mind, this is not a problem.”

“Jesus did not choose us and send us forth to become more numerous,” the pope said March 31 as he met Catholic priests and religious and leaders of other Christian churches in St. Peter’s Cathedral in Rabat.

Jesus “called us to a mission. He put us in the midst of society like a handful of yeast: the yeast of the beatitudes and the fraternal love by which, as Christians, we can all join in making present His kingdom,” the pope said.

The success of a Christian mission, he said, is not so much about the space Christians occupy, “but rather by our capacity to generate change and to awaken wonder and compassion.”

“The problem is not when we are few in number,” the pope said, “but when we are insignificant, salt that has lost the flavor of the Gospel or lamps that no longer shed light.” 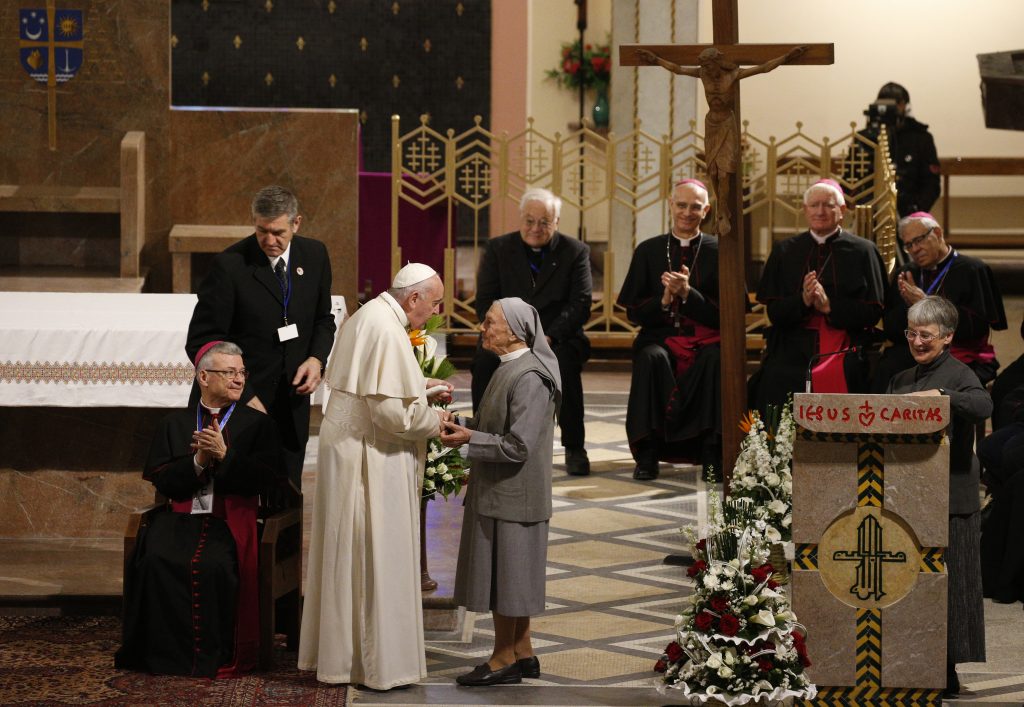 Pope Francis greets a nun during a meeting with priests, religious men and women and the ecumenical Council of Churches at the cathedral in Rabat, Morocco, March 31, 2019. (CNS photo/Paul Haring)

In Morocco, where almost everyone is Muslim, the pope said Christians are called to be “a living sacrament of the dialogue that God wants to initiate and with each man and woman.”

Sister Mary Elizabeth Donlon, regional superior of the Franciscan Missionaries of Mary, told Pope Francis that “in a spirit of faith, we pursue a dialogue of life through active collaboration with our Muslim brothers and sisters in teaching, public health, serving the disabled, single mothers and the many migrants that cross this country.”

The religious, all foreigners, have been given the grace “to forge bonds of friendship and affection in deep respect with this people, despite the challenge of our diverse cultures,” she said.

Before going to the cathedral, Pope Francis made a short trip out to Temara, on the outskirts of Rabat, to visit a social service center run by the Daughters of Charity. The sisters assist people with physical disabilities, offer meals to poor children, train women in tailoring and run a nursery and primary school. All of the students and most of the staff are Muslim.

Speaking later in the cathedral, Pope Francis said that dialogue is not a “fashion” or “strategy,” but a way of imitating Jesus, who, moved by love, sought out everyone and began a dialogue with them.

Christians must not hide who they are or what they believe, but they must share their faith with respect for the faith of others, the pope said.

For Christians in Morocco, especially Catholic priests and religious, taking part in the dialogue that leads to salvation takes place first of all in prayer, by bringing others to the Lord in prayer.

Pope Francis told the story of a missionary he knew who, in his prayer, brought all the people he met to the Lord, because he knew he was sent in the midst of that non-Christian majority “not to govern but to love, and this led him to pray this prayer with special feeling.

“Dialogue, then, becomes prayer,” he said. “A prayer that does not distinguish, separate or marginalize, but embraces the life of our neighbor. A prayer of intercession that says to the Father, ‘Thy kingdom come,’ not by violence, not by hatred, not by ethnic, religious or economic supremacy, but by the power of the compassion poured out on the cross for all mankind.”