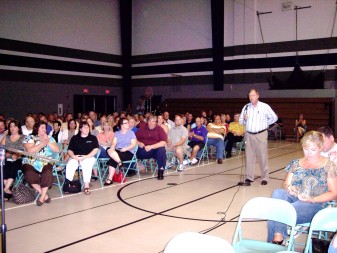 Parents and teachers who gathered at Marian High school to her the proposed plan for the future of three Mishawaka Catholic grade schools had many questions about the plan, but were generally accepting.

MISHAWAKA — A committee studying the declining enrollments and increasing expenses of the three Catholic grade schools near downtown Mishawaka announced its recommended plan for the schools’ futures at an Aug. 30 gathering at Marian High School.
As one parent at the meeting noted, it is a “trinitarian” plan: One school called Mishawaka Catholic Academy would operate on three campuses that utilize each existing grade school building. Pre-K through second grade classes would be at St. Bavo, third through fifth grade at St. Joseph and sixth through eighth grades at St. Monica.

Father Terry Fisher, pastor of St. Joseph Parish and a member of the committee, welcomed the approximately 300 parents, teachers and friends of the three Catholic grade schools.

“The number one goal the committee sent Bishop D’Arcy before he retired was to leave the schools just as they are,” Father Fisher said. But, he continued, “If we look at it through realistic eyes; it’s impossible. The numbers aren’t there; the money isn’t there; the growth isn’t there.”

Indeed, school officials said enrollment in each of the three grade schools has fallen below 200, and as those numbers fall, so does tuition income. Smaller numbers of students also make it harder for the schools to provide enrichment courses and experiences, noted Sister Pat Gavin, a School Sister of Notre Dame who is principal of St. Monica, and Linda Hixon, principal of St. Bavo, both members of the committee. Those two principals, along with Mary Geist, principal of St. Joseph who spoke from the audience, were supportive of the plan.

Sister Pat said her “heart is breaking” to think there would no longer be a St. Monica School, but to resist this change would not be best for the students. The change would be most difficult for staffs, teachers and parents, but “the kids will be fine,” she added.

“This is what we need to do if we’re going to keep Catholic education alive and strong in Mishawaka,” Sister Pat said.

The committee annunciated three goals that they said their plan met: Keeping Catholic identity, building community and maintaining excellence — all three schools rank in the top 10 in ISTEP scores among diocesan grade schools. Committee members noted that the three schools already work together on many projects and combine forces for their athletics teams, so many of the children and parents already know one another.

The plan, the committee said, would increase economic efficiency, lower costs and parish subsidies and maintain affordable tuition. The committee projected that the schools would maintain 85 percent of their current enrollments for 2011-2012, the first academic year of the new structure. Tuition projected for that first year was comparable to current tuitions in the three grade schools for 2010-2011. That rate would be $3,080 for the first child; $4,865 for two children and $6,510 for three children.

In spite of the deep emotions and uncertainty felt by parents and teachers at the gathering, the atmosphere was calm and respectful. After the committee presented the various aspects of the plan for an hour, a floor microphone was opened for questions and comments, a session that went on long past the one hour allotted.

Heartfelt comments and accompanying applause indicated that most people in attendance understood the issues and supported the plan in spite of sorrow for the loss of individual schools and complications it would cause many families. A few parents said they felt they were being given no choice in the matter, but virtually everyone in the audience agreed on two points: They love their parish grade schools and the dedicated teachers who staff them.

Some parents expressed logistical concerns of having to take children from the same family to three different school buildings. Superintendent of diocesan schools, Dr. Mark Myers, said that issue had been discussed and would be addressed by staggering school start and dismissal times. (St. Bavo is one-half mile from St. Joseph; St. Monica is 1.2 miles from St. Bavo and less than a mile from St. Joseph.)
In response to more questions about specifics, Myers said that the committee’s goal was to hire a principal for the new school by Nov. 1. That principal would hire two assistant principals and teachers by Feb. 1. The principal and teachers then would iron out specifics like curriculum and schedules, which would be announced as soon as possible.

Myers drew applause when he said hiring priority would be given to current teachers in the three schools. The committee also is recommending that teachers close to retirement be given an extra year credit toward retirement and that schools hiring experienced teachers be given a subsidy to help meet the teachers’ higher pay scale.

The committee’s plan now will go to Bishop Kevin Rhoades for his consideration.