“What time is it? Now is the time of Mercy!” This was the enthusiastic message of Father Michael Gaitley, MIC, during his weekend retreat at St. Pius X Parish on March 8-9, which brought together over 700 people for an encounter with the mercy of Christ and the love of Mary.

Father Gaitley, popular for his books explaining the mystery of God’s Divine Mercy and how to become consecrated to Jesus through Mary in the example of great saints, encouraged those present to be missionaries of mercy by displaying trust, littleness, courage and compassion.

In his opening remarks, Father Gaitley expressed: “While we are living in a time of unprecedented evils, for that very reason God wants to give us even greater graces. In the Diary of St. Faustina, Jesus tells her “the greater the sinner, the greater the right he has to My mercy.” Acknowledging that there might be initial skepticism to such an optimistic view in the face of tremendous suffering, Father Gaitley shared his personal testimony of how he came to believe in the truth of Divine Mercy through gentle moments of encounter with the Lord and by seeing his father’s conversion and healing from cancer through the power of the Divine Mercy Chaplet and image. 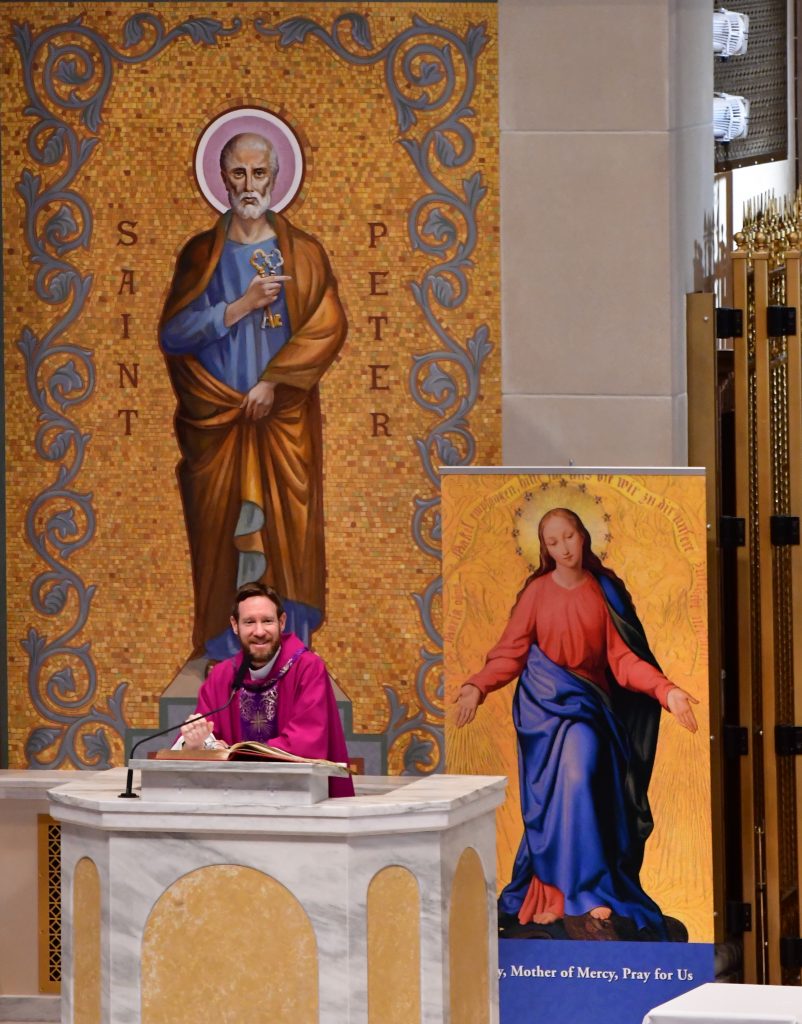 Father Gaitley stands at the ambo to deliver the homily during Mass at the Mercy and Mary Retreat. He emphasized that Christians are able to participate in the divine life of the Trinity through the redemptive action of Christ, if we allow Him to encounter us in our brokenness and be reconciled to Him.

He continued by emphasizing the power of the Mass as the most perfect response to all sin and suffering, specifically in the Concluding Doxology of the Eucharistic Prayer, during which the priest prays: “Through Him, with Him, and in Him, O God, almighty Father, in the unity of the Holy Spirit, all glory and honor is Yours, forever and ever.” Father Gaitley said that “in this moment, the perfect sacrifice of Christ’s love becomes our own prayer and our own offering, when we unite ourselves to Him, allowing us to truly become perfect as our Heavenly Father is perfect.” Furthermore, he explained, “the Chaplet of Divine Mercy is such a powerful prayer because it allows us [to] enter into that supercharged moment of the Mass, which has the ability to change our lives and the whole world.”

To begin the second day of the retreat, Father Gaitley spoke about the spirituality of St. Thérèse of Lisieux. He stated, “I am going to make a bold claim, that you and I really, truly can become saints! St. Thérèse’s “Little Way” offers all souls, especially “little souls,” the power to overcome potential discouragements and attain the heights of perfection. This is possible through coming to Jesus in humility, realizing our brokenness and allowing Him to raise us up. However, it requires the continual effort of trusting and trying to advance in the spiritual life, even in the times when it feels absolutely useless. As St. Mother Teresa said, “God doesn’t demand success, only faithfulness.” Jesus likes to keep little souls little, which means they often are not going to see their progress and don’t feel like super saints. Don’t get discouraged!”

Next, Father Gaitley transitioned to what he calls the “Second Greatest Story Ever Told,” which centers on Divine Mercy in the life of St. John Paul II. He revealed the connection between Poland’s unique history of upholding the Catholic faith in Europe amidst tremendous persecution, as well as the importance of St. Faustina, Our Lady of Fatima, Marian Consecration, and the witness of many 20th– and 21st-century martyrs in the pope’s life.

“After recovering from the assassination attempt on his life in 1981, the first place he went was to the Italian Shrine of Merciful Love and stated, “It could be said that precisely this situation assigned the message of Divine Mercy to me as my special task before God.” Then on April 30, 2000, the day of St. Faustina’s canonization and the institution of Divine Mercy Sunday as an official liturgical feast, John Paul II said, “today is the happiest day of my life.” Why? I suggest that the happiest day of our lives is the day we complete the mission God has given to us.”

Father Gaitley also spoke at length about the importance of Marian Consecration and relying on Mary’s mediation at all times. He demonstrated how St. Maximilian Kolbe had become so conformed to the Immaculate that he was able throughout his ministry to “provide a tender, motherly presence to Mary’s children who were most hurting, most suffering and most abandoned, in places that were ravaged by war, and which culminated in laying down his life for a stranger.”

Teresa Breckler, parishioner of St. Mary of the Assumption, Avilla, who recently returned from a pilgrimage to Poland, shared: “Divine Mercy shows how much the hearts of our age are indeed crafted for this special time by God’s grace and the graces won by the martyrs that came before us. At Auschwitz I saw in a new way the reality of evil and intense misery, yet at Kolbe’s cell and in this retreat, I have seen in a new way the reality of mercy.”

Mackenzie Kracker, a University of Notre Dame senior and president of the university’s Militia Immaculata, which coordinates campus Marian Consecrations each semester, shared her joy to have taken part in the retreat alongside over 20 fellow students who delayed their spring break travel plans in order to attend. “Father Gaitley’s emphasis on Mary bringing us to Jesus’ pierced heart, the fountain of Mercy through our consecrations was so beautiful! I was also challenged and inspired by his call to not just seek Mary’s consolation as mother within our consecrations but also seek to console her pierced heart by giving her complete permission to use us as she wills!”

Anja Renkes, who coordinates a local grassroots Divine Mercy prayer group and encourages pondering the wounds of Christ, shared how this talk on Mary’s identity further opened her heart. “Father Gaitley described how Jesus, knowing that if we choose to follow Him and love with His love, will suffer. During His suffering on the cross, all He had to comfort Him was Mary’s motherly, loving presence. Jesus entrusts us to Mary from the cross because He wanted us to have the same comfort and comforter that He had during His suffering. Mary holds our hand and comforts us as her children during our suffering.”

After eucharistic adoration and a communal Divine Mercy Chaplet led by Father Gaitley, he concluded the retreat describing the Marian Missionaries of Divine Mercy, a group of young people who dedicate a year to service and companionship with the poor and homeless, based in Massachusetts near the National Shrine of Divine Mercy. Each person in attendance received a copy of the Marian Missionaries manual for instructions on participation in their spirituality and living out the Divine Mercy message with courage and compassion. Father Gaitley serves as the primary formator for these young people, and he encouraged those interested in learning more to visit in person or online at http://marianmissionaries.org/.

The retreat was co-sponsored by the Diocese of Fort Wayne-South Bend Office of Adult Faith Formation and Redeemer Radio.