The friars soon will be gone, but the men’s caring spirit will live on at St. Anthony of Padua Parish in Angola.

The Conventual Franciscan Friars of Our Lady of Consolation Province end their ministry on June 28 after 91 years of service in Steuben and LaGrange counties in the Diocese of Fort Wayne-South Bend.

“They all are such wonderful men,” said Marilyn Karpinski, the pastoral council secretary at St. Anthony Parish, where the friars have been based. “They have a holiness about them you can’t question. It’s so enlightening.” 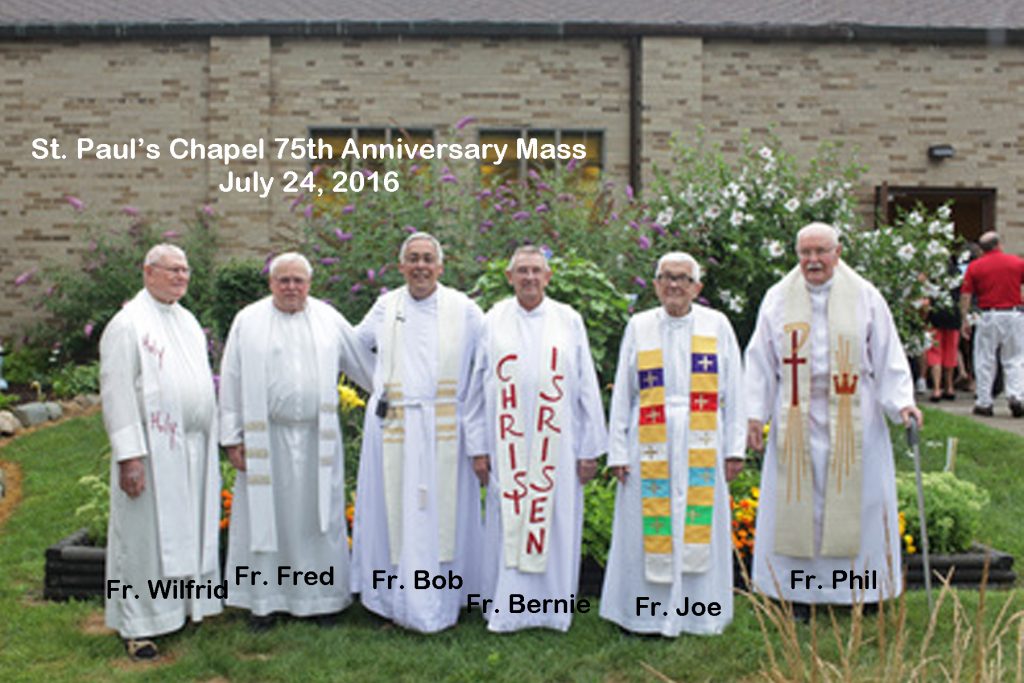 The parish and diocese will honor and say goodbye to the friars during a Franciscan Farewell event on June 18 at St. Anthony of Padua Parish. The evening will begin with Mass at 5 p.m., celebrated by Bishop Kevin C. Rhoades. A reception will follow to thank the friars for their contributions over the past decades and for the work of the current friars in residence, Father Bob Showers, Father Ray Mallett and Father Bernie Zajdel, OFM Conv.

Bishop Rhoades notified St. Anthony of Padua parishioners by letter in February that the friars will end their ministry in the Angola area as of June 28.

“They built up the Catholic Church in Steuben County,” Bishop Rhoades wrote in the letter. “They have been a part of your lives and the lives of your families for many decades. I know you will miss them and their Franciscan charism. Amid our sadness at their departure, may our hearts be filled with gratitude for all the blessings we have received through their ministry and witness. The friars will surely remain in our hearts and prayers.” 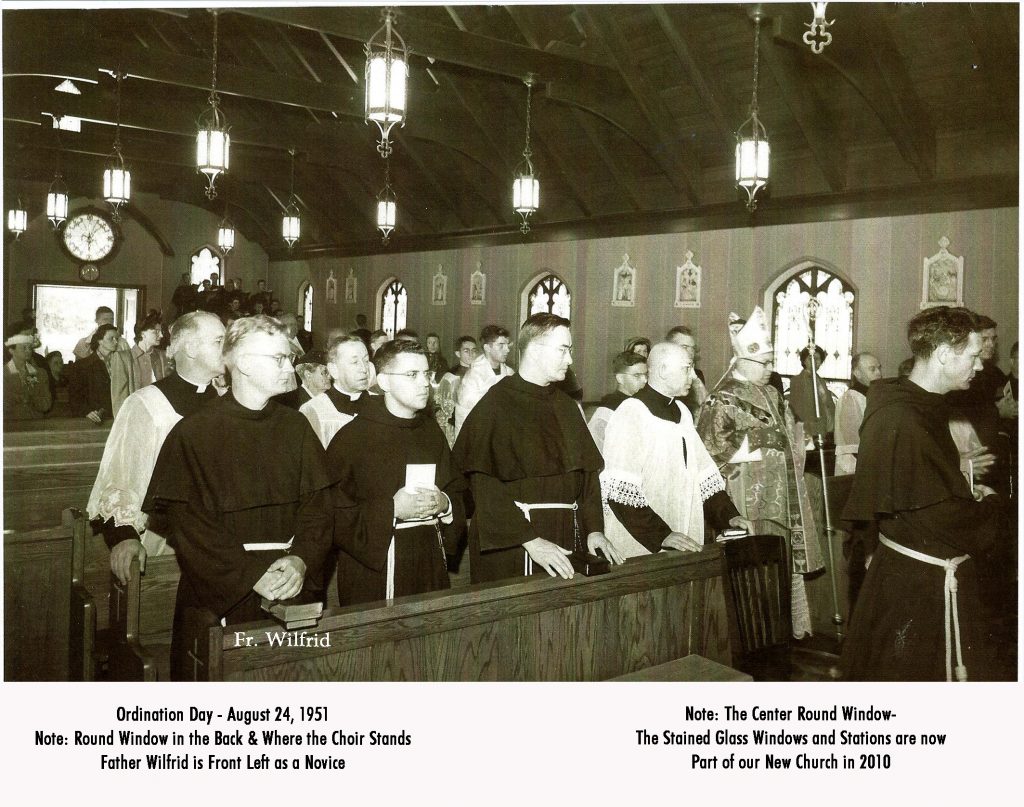 An ordination of Our Lady of Consolation Province, Order of Friars Minor Conventual members took place in 1951 at St. Anthony of Padua Parish in Angola. Father Wilfred Logsdon, who then was a novice and later served as an associate pastor at the parish, stands at front left. The round window, stained glass windows and Stations of the Cross now are part of the current church, which was built in 2010.

Bishop Rhoades and the Our Lady of Consolation Province mutually agreed to the friars’ departure, said Father Wayne Hellmann, OFM Conv., the minister provincial leading the province. The diocese said it has enough priests to take over the friars’ ministry in the Angola area, Father Hellmann said, and the province has bishops in other areas of the country begging for priests.

The friars hope St. Anthony of Padua parishioners will carry on their work. “I told them it’s your turn to be missionaries in that county,” Father Hellmann said. 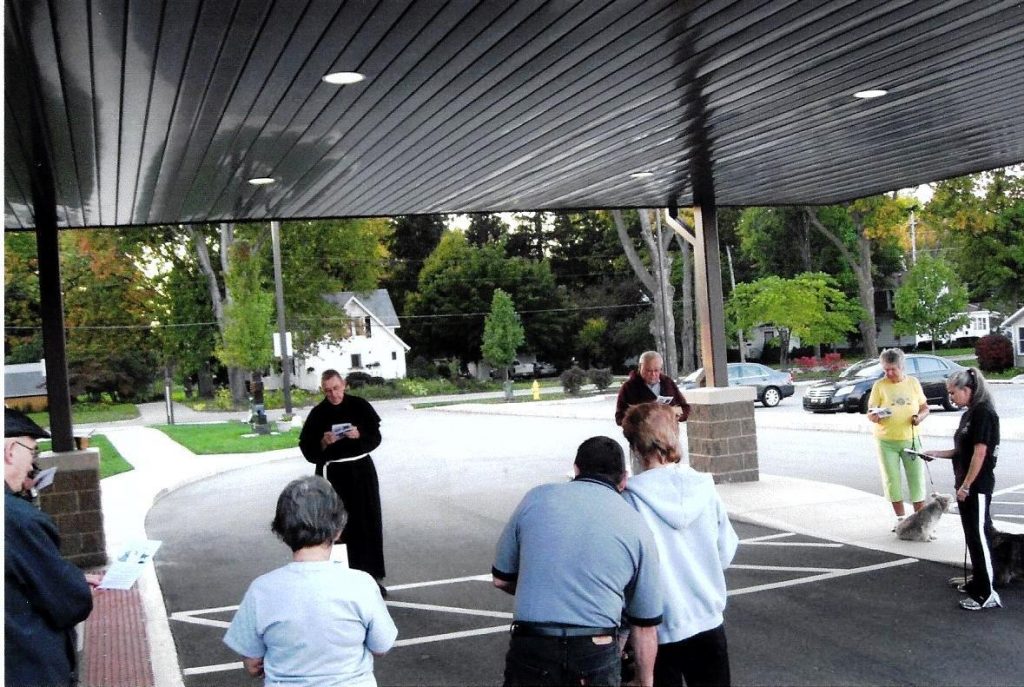 Friars Father Bernie Zajdel, back left, and Father Bob Showers, back right, both OFM Conv., lead a blessing of the animals at St. Anthony of Padua Parish in Angola.

They came to the United States in 1852 to minister to German-speaking immigrants around Galveston, Texas, the friars’ website said. They later expanded their ministry to the Midwest and East Coast and eventually organized large geographic areas of the country into provinces.

They created Our Lady of Consolation Province in 1926 to serve the Midwest, the website said. The province is based at Mount St. Francis in southern Indiana near Louisville, Kentucky.

Friars from the province now serve a large portion of the United States, as well as in a number of foreign countries, according to the website. They staff parishes, lead retreats, teach in seminaries and universities and serve as chaplains at hospitals, nursing homes, military bases and prisons.

After forming Our Lady of Consolation Province, the friars began looking for a location for a novitiate where new members could go for orientation and further vocation discernment. 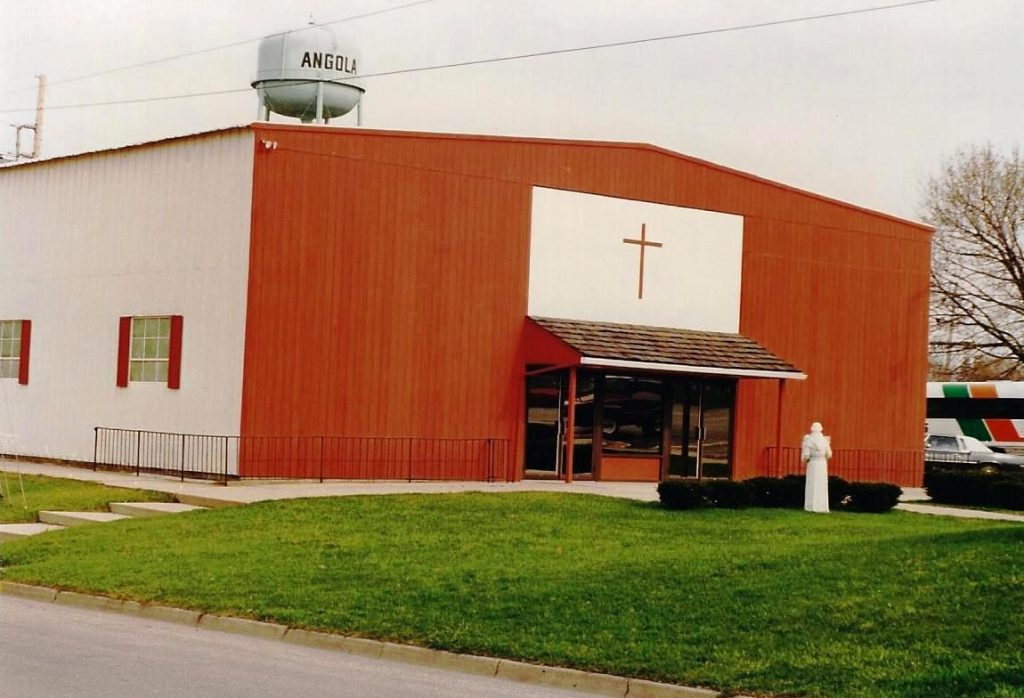 The growing St. Anthony of Padua Parish congregation moved into this building in 1959, the third sanctuary in the history of the parish started as a mission parish in 1926. The parish’s current church building was constructed in 2010.

“They wanted someplace in Indiana that would be reasonably close, and they chose Steuben County because at that time there was not a (resident) priest in that county,” Father Hellmann said. “ … They knew that was basically a missionary county, so that’s where they went, basically to serve the local church as well as to provide a space for the novitiate.”

What is now St. Anthony of Padua Parish had begun in 1924 as a mission outreach of St. Michael Parish in Waterloo, it said on the parish website, www.stanthonyangola.com. The outreach was dedicated as a mission parish and named for St. Rita in 1926, a 1976 parish jubilee booklet said.

Bishop John F. Noll, who then was leader of the Diocese of Fort Wayne, invited Our Lady of Consolation Province friars in 1931 to open a novitiate in Angola and to take over responsibility for the young parish there, the parish jubilee booklet said. The friars re-named the parish after Franciscan member St. Anthony of Padua.

Over the decades, friars at St. Anthony of Padua expanded their ministry to serve St. Paul Chapel at Clear Lake, St. Joseph Parish in LaGrange, St. Mary of the Angels Oratory at Big Long Lake and the Manapogo Park campground near Lake Pleasant, the parish website said. The friars used the novitiate at St. Anthony of Padua until they opened a new one in the fall of 1962 near the City of Auburn, the jubilee booklet noted.

St. Anthony of Padua Parish now serves about 650 families year-round, but attendance triples during the summer because so many people spend time in the lakes region around Angola, parish member Karpinski said.

“Our Memorial Day and Labor Day rival Christmas in attendance,” she added.

Having friars in residence at St. Anthony of Padua was a great benefit to the parish, she said. 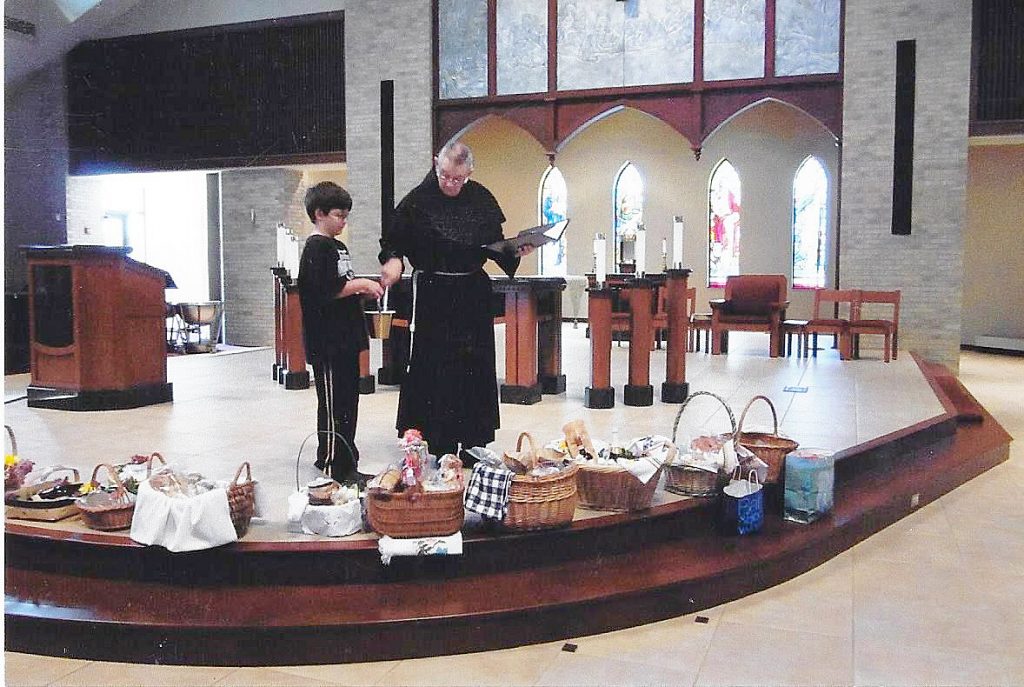 “Just the presence of them and the humility and peacefulness was such a good example to the parish, and how they care for one another,” Karpinski said. “It was just a beautiful example of serving God while serving others.”

The friars have appreciated their years at St. Anthony of Padua and in Steuben County.

“The guys there have enjoyed the town — it’s a quieter town — and they have enjoyed the people,” Father Hellmann said. The friars have made many friends, he added, and parishioners have been generous in supporting the province’s missionary work in Africa.

Father Hellmann hopes the friars’ legacy will be that people continue to “open up the boundaries a bit, to think a little broader about the needs of the broader Church and more in communion with the global Church.”

Karpinski said part of the friars’ legacy also will be the community of lay Franciscans that has “blossomed” at St. Anthony of Padua during the past 12 years. Secular Franciscans are lay people who seek to share the Gospel in their everyday lives.

In addition, she said the friars’ spirit will live on in the parish. “I think everybody is kind of geared to working with a humble heart.”

“It is a very open, accepting place,” she added, noting they get many comments from people who say they feel so welcome at St. Anthony of Padua.